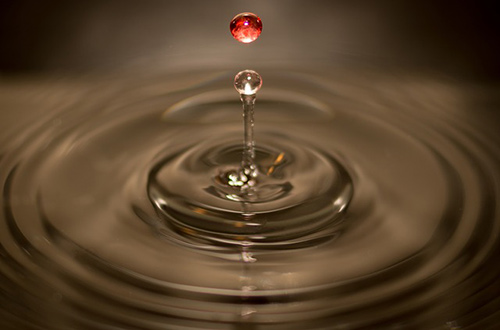 If you check out the word fortitude you get a sense of the characteristics necessary to campaign on Public Health. Resilience, endurance, perseverance, patience, tenacity, resolve, determination, grit and pluck. I wish we’d looked this up in 2012 when we started all of this – we may have decided to duck the challenge. We didn’t, and now we know why fortitude is essential, necessary, imperative, obligatory paramount, courage over a long period, plucky………

Back to 2012 then - let’s fire up the De Lorean although for the petrol heads it’s a metaphorical one as we know they stopped making them in 1983 which coincidentally was the same year that McColl v Strathclyde set a 201 day record for any legal case in Scotland over you guessed it Community Water Fluoridation. Manchester City win their first league title in 44 years, the Olympics come to London, Bruce Springsteen releases Land of Hope and Dreams and Hull LDC wake up.

Hull LDC met at the Ionians Rugby Club back then and that evening we meant business. Ionians were known for their love of democracy, philosophy the arts and pleasure. We were more in to treating our patients and staying healthy and solvent as NHS Practitioners but we did enjoy a beer. That night we were fed up as usual. Fed up with the tsunami of decay and the human consequences, the pain, the extractions the relentless tide of poor dental health. We were all very committed to prevention. We were all very committed to our patients and to the community of Hull. But we felt powerless and we knew we needed change. Hull has very poor oral health and is one of the most deprived areas in England. We understand the social health gradient now, but we were embedded in it in 2012 (as we still are) and we finally decided to do something. This isn’t surprising. People from Hull have a track record of standing up. In 1642 Hull refused the King entry to the City even though he turned up personally, endured a long siege militarily outnumbered by 2:1 and finally saw off the threat. That definitely takes pluck, grit, and fortitude.

Over a pint of bitter and a sandwich we voted to try and drive a Fluoridation agenda. We would start with a letter to the BDJ and publish an e – petition. So we did, convinced in our own minds that by the next AGM we would have cracked it.

We even developed a QR code link to the e- petition on the Petition Parliament site. Like a deluded punter down the bookies – we couldn’t lose could we? 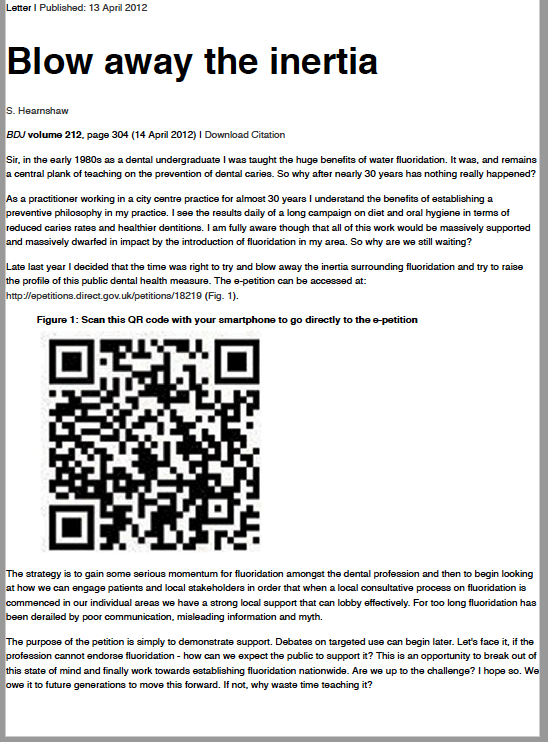 The BDJ printed the letter and we waited for the e-petition to take off, soar,go viral. But it didn’t and in October six months after our rallying call for something to happen, it closed on 315 signatures. 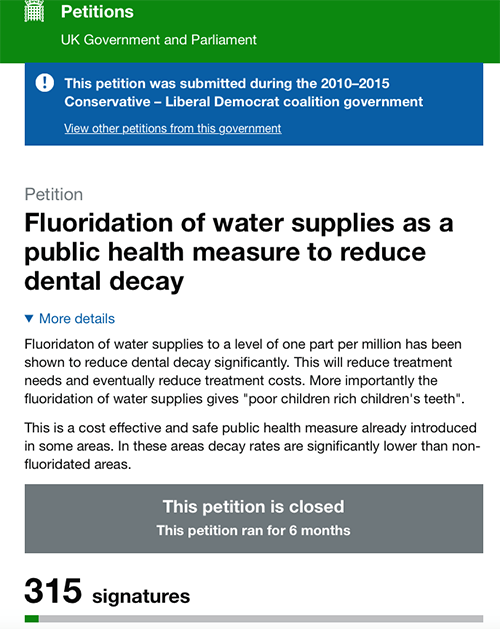 So in October 2012 it seemed like Hull LDC were standing at the Fluoridation barricades alone or at least there were only 315 of us. Then the phone rang in Reception and my Nurse whispered in my ear – “there’s a Prof on the phone who wants to speak to you about your letter in the Journal.” I finished my fifth extraction on a child that morning and took the call.

More posts from author
Monday, 07 October 2019 LDCs and campaigning with fellowship
Monday, 05 August 2019 Blast From The Past