Domiciliary dental care was in the news the other day — or rather a lack of it. Hopefully there may be some discussion now on adequate funding for treating the housebound. "Sorry. Don't Do House Visits" 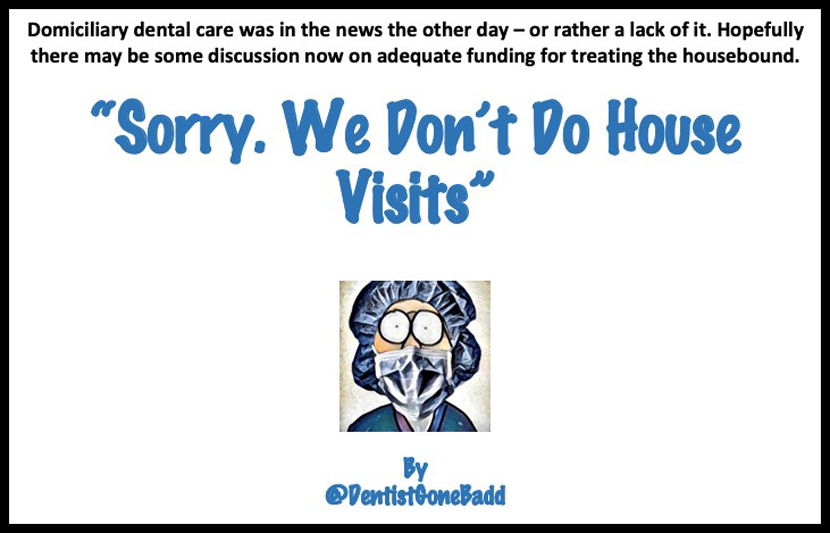 Don’t Try This At Home

Last week, the Care Quality Commission reported that residents in care homes did not always have access to dentists and were not getting the support they needed to look after their teeth.

The CQC visited 100 homes caring for the elderly and disabled and drew the conclusion that staff were failing to identify oral health problems in residents and one in six care homes were not assessing oral health on the admission of residents into care.   Strikingly, one third of the care homes said they could not always access dental care. Half of all care home staff were found to have not received training in oral health care. 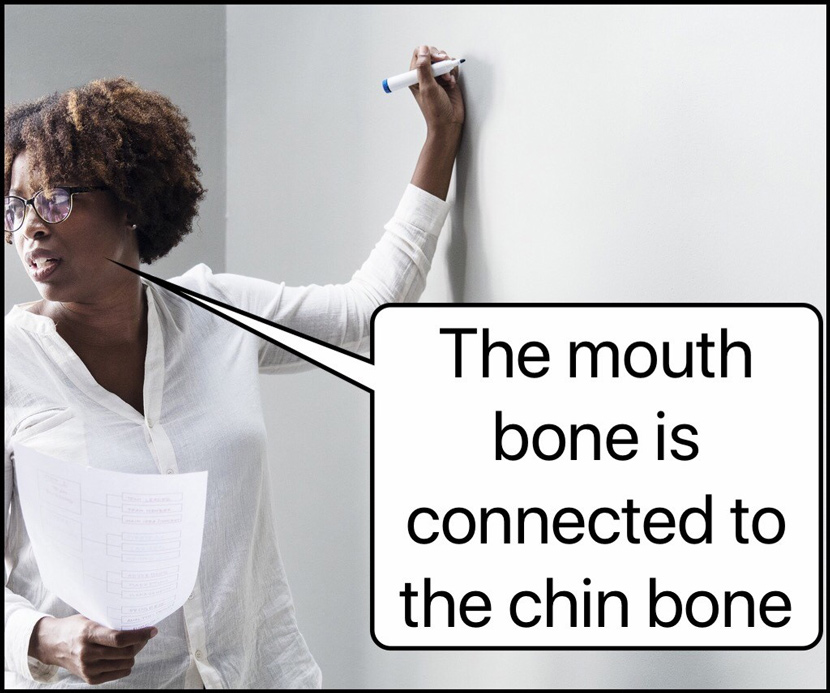 One instance was quoted where a patient had to have her denture surgically removed because the gingivae had grown all around it, and another where an oral problem was only identified because the resident stopped eating (due to pain).

The dental profession got away lightly in the report, but our time will come. The British Dental Association highlighted the fact that the NHS is only paying a fraction of the money that is needed to provide adequate services to those members of the population that are classed as “severely limited.”

And therein lies the problem. Even if care homes did decide that they wanted to ensure regular dental care for residents, who would provide it? Certainly the current dental contract wouldn’t adequately compensate GDP’s to provide domiciliary care, plus, very few practitioners would be able to borrow defibrillators, oxygen cylinders, portable suction and emergency drugs from their practices while their colleagues are busy taking teeth out on unstable angina and asthma sufferers back at base. Because that’s what the CQC expects, as does the GDC. A risk assessment needs to be carried out before carrying out treatment in a domiciliary setting and if you did decide to risk it, you need to ensure you also bring your sharps box, provide a surgery-clean environment and a decent light. They don’t mention lights specifically, but woe betide anyone who misses something in an exam because they didn’t use a decent operating light. The pen torch I used to carry on domiciliary visits years ago wouldn’t thwart the likes of our specialist dental litigants up North if something went awry. Nowadays, I would regard any general practitioner who volunteered to carry out a domiciliary visit and the potential risk of litigation or cross-infection breaches, as criminally insane. 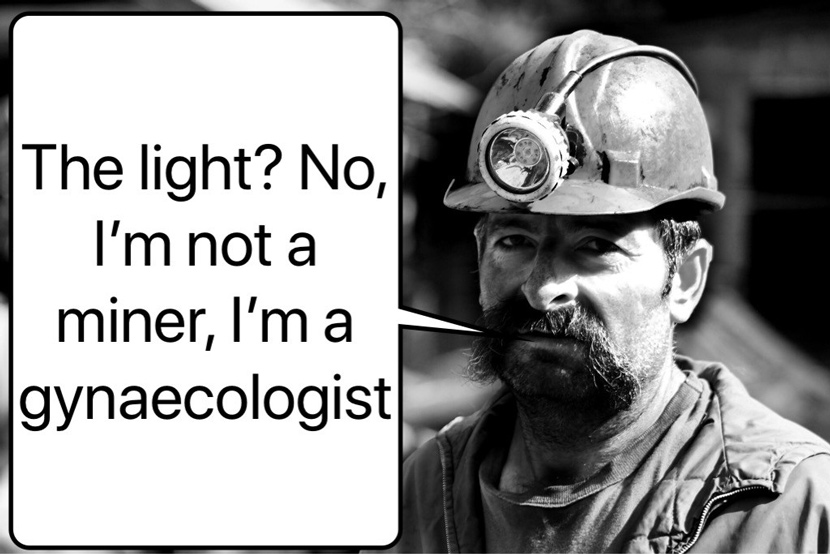 So, of course, it’s down to the local community dental service to provide domiciliary care in the NHS, and as we all know, they are hard pressed and very stretched. But when they DO get to see domiciliary patients, they probably have fun. I certainly did.

I grew up in the pre-CQC days, when at least there was a clear fee for going out to see patients in their own homes or in residential homes. I was often the only dentist in the practices I worked at who would do domiciliary visits, so I usually went after work, more often than not alone, and my kit was carried in a Mothercare box similar to the one that my late wife and I used to keep all the paraphernalia for cleaning and feeding babies with.

Most of my domiciliary care was dedicated to providing dentures, but if the odd partially dentate patient needed a scale, I would carry that out before taking impressions. I can’t remember exactly how I held my pen torch – I suspect it may have been by clenching it between my teeth.

In the late eighties, there wasn’t much domiciliary kit around that you could buy without paying a fortune. I seem to recall seeing collapsible, portable dental chairs available in the dental press for some extortionate amount and units for driving handpieces were similarly priced. All I really needed was a motor for driving a straight handpiece or holding a straight acrylic bur. I don’t suppose I was the only dentist to ever think of this, but I bought a Dremel.   It took straight burs and it was fine for adjusting dentures and if you covered it with a couple of layers of protective plastic tubing (which we rarely used in the surgery), it really looked the part. Latterly, I bought a micro-motor – which still cost a bomb – but at least I could do the occasional polish and smooth the odd cusp.

The treatments I used to find myself talked into make my blood run cold now in the light of the emergence of The Dark Side (as I like to call the legal profession specialising in dental litigation).

I used to treat a feisty retired engineer who I actually enjoyed seeing because he was always an intellectual challenge. He wanted to know exactly what I was doing and I had to explain the mechanics of everything I did. When he became housebound after a stroke, I visited him at home and carried out basic treatment to keep him going. He was a huge man with a bite to match and he was slowly grinding his teeth into dust. It was sometimes difficult to find a window in which to fit in treatment since he was a verbose Welshman who insisted on reading me his poetry between giving me his opinion on God and Margaret Thatcher. One day he fractured an upper premolar on a mint humbug and against my better judgement, I removed the root with some difficulty while my nurse held a Micky Mouse bedroom lamp one of his nieces had given him in the 70’s. 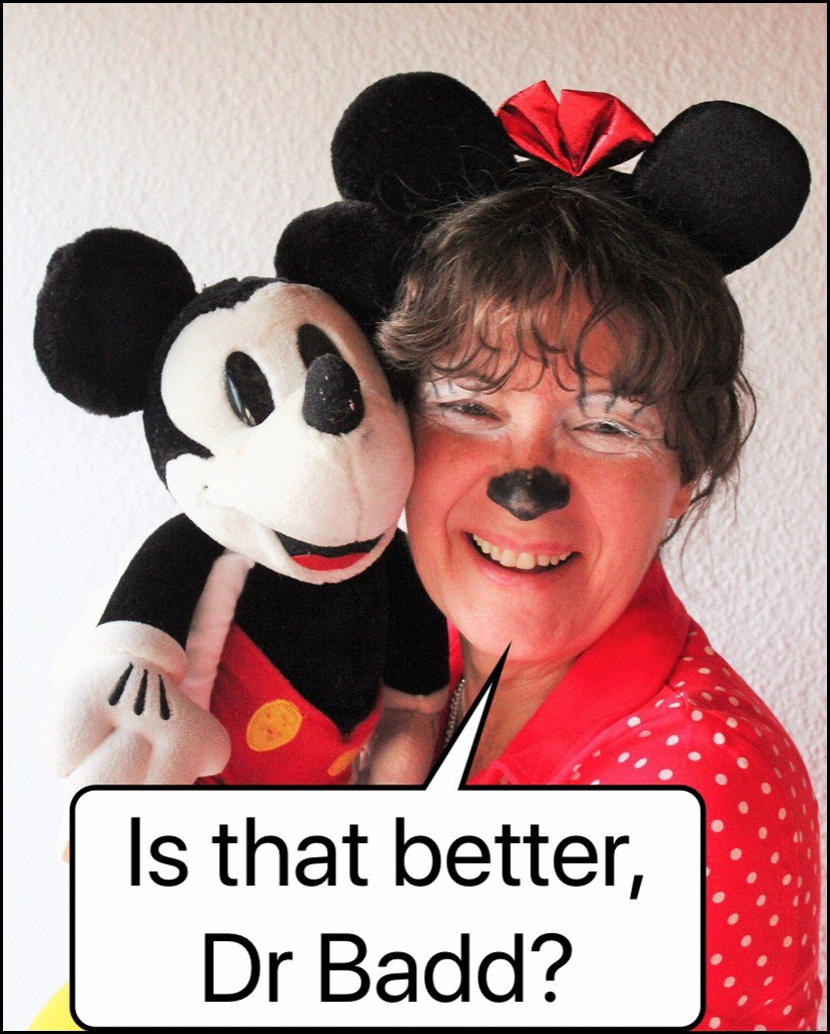 Generally, I found domiciliary visits to be quite joyous. Patients were always pleased to see me and were grateful that I’d turned out and made the effort. One day I turned up at a house to see an elderly lady I had just inserted a new denture in and I promised I’d return just to check she was getting on ok and carry out any adjustments she may need. I knocked on the door, about five minutes after my estimated time of arrival, to be greeted by a fairly grumpy lady I hadn’t seen before who said: “You were supposed to be here at half five. You’re too late.” I was about to launch into an apology for my tardiness when she interrupted: “She’s dead.” I never found out at what point the patient expired, but I could only assume it was that day otherwise, presumably, the appointment would have been cancelled.

The actual treatment I carried out wasn’t always the problem. One day, a patient I had treated for some years, asked if I would see her lodger as a home visit. He had recently become housebound and she had now turned into his carer. He had been in discomfort for some weeks apparently and I said I would ‘assess’ him. The patient lived not far from my home and so I called in that night. What my patient hadn’t told me, was that he was actually bed bound and was surrounded by oxygen cylinders and was wearing a facemask when I walked into his bedroom. I can’t honestly recall what the underlying medical problem was – an educated guess would suggest respiratory, but I missed the lecture on that at 3rd BDS. Anyway, the chap had a florid abscess on one of his broken off and carious lower incisors. I really felt he needed referring but faced with a tearful patient and his equally tearful landlady (she’d built me up into some sort of saint), I relented and said I’d have a go at taking the tooth out once I’d cleared the abscess with my faithful old prescription pad. I spoke to the patient’s GP a couple of days later to ensure he was happy with me proceeding. It was a little worrying when he said: “Sure….if you’re game.”

So the day of the extraction visit came a week or so later. Once I’d manoeuvred the patient to the side of the bed, I administered local and then tried to get a grip on the broken root. It was difficult to get the right position and the forceps kept slipping off. At last I got a good grip and started to get some movement on the tooth. I took it gently because I didn’t want to break the root any further. I suddenly became aware of the door opening to the bedroom, but nobody had apparently entered. I carried on with my task and then became aware of a strange sensation on my leg. I took my eye off the tooth for a second to see a little terrier dog (I’m not sure of the make), shagging my leg. There was nothing I could do, but carry on with the extraction, for fear of losing my grip on it. Mercifully, I delivered the tooth before the dog delivered, and I was able to shoo it out. 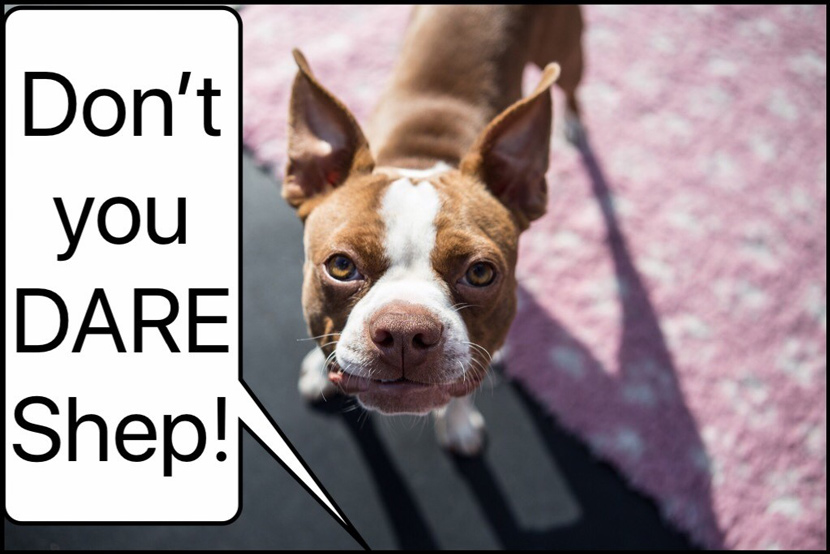 Come to think of it, the community dental service is probably best to carry out domiciliary treatment.  I don’t know if it’s a myth, but I’d heard they issue waterproof scrubs.