LDCs and campaigning with fellowship

For many years Hull LDC stayed away from the national conference of Local Dental Committees (LDCs). Our preconception was that whilst the Conference might be good for networking, it punched below its weight. We were wrong.

LDC Conference is a fantastic forum, which provides the opportunity to debate Motions, to come to a consensus and to influence policy. In 2017 we saw the light and we decided to table a motion suggesting that we should solicit the support of Local Authorities for water fluoridation as part of Starting Well (SW) Programmes in relevant areas. We were basically “dipping our toes” in the (fluoridated) water. After all, SW is about investing in programmes targeted at the 13 worst areas for child dental health in England where need is greatest, including our “back yard”  - Hull.

The result of this motion was that it was supported by Conference – but not unanimously.

We’ve learned a lot along the way – including the importance of making the motion clearer which would have helped to avoid the voting result. Some delegates wanted CWF included as a short-term strategy! 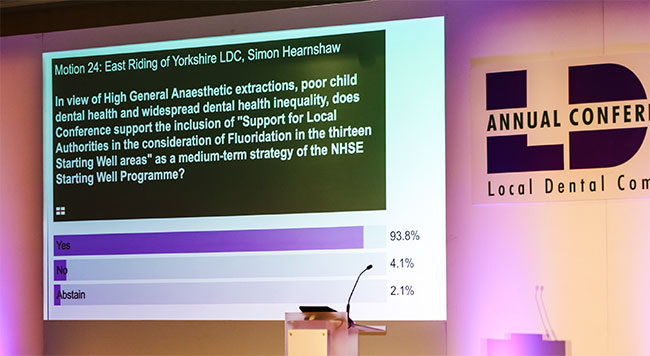 The LDC also started to use the letters pages of the excellent BDJ to get their messages across. In response to a letter from Paul Connett of Fluoride Action Network1 Hull LDC2 highlighted the lack of credible evidence for his points that fluoride at 1ppm is chemophobic, neurotoxic and toxic as well as the emotionally charged language. This letter exchange was two and half years ago and   similar “tactics” remain the thrust of the Fluoride Action Network3,4 position on CWF.

Click the images below to read the original letters.

In 2018 we decided to build on the first motion and call for funding reform for CWF- because Councils simply don’t have the resources to implement schemes following years of central government budget cuts. This is also fair because as the motion explains, the majority of the return on investment5 falls to NHSE.

This time the motion was unanimously supported and the BDA picked up the baton:

The successful motion reflected the support for CWF at the sharp end of Primary Dental Care and created opportunities for the BDA to take forward issues generated by LDCs. Conference motions are effective and with support from the LDC community and BDA leadership, the momentum for change is building. This is huge credit to LDCs whose members work at the coalface and who over three years have supported CWF motions again and again.

The letter the BDA refers to was sent to Simon Stevens. It called for the reallocation of the recurrent costs of CWF schemes from Councils to the NHS. Interestingly, this concept was further developed in this year’s Prevention Green Paper where it was suggested that we need to look for ways of removing barriers to CWF. Councils should be encouraged to come forward and seek cost-sharing partnerships6.

In 2019 Hull LDC built on both of the previous motions to ask conference to support those local authorities moving forward with CWF.

Once again Conference supported the motion 100%.

At the beginning of 2019 Hull LDC began to work with the British Fluoridation Society and the BDA to form the National CWF Network. This alliance now has a large membership of dental organisations and a growing membership outside dentistry including the National Children’s Bureau (NCB). The partnership with the NCB is especially powerful, as this organisation exists to support change in society and deliver better childhood.