Can we fix it?

If your patients feel more confident using a bit of glue on your superb denture, do you despair? Well you shouldn't. It's all cool according to a new white paper.
Meeting A Sticky End
Why Dental Fixatives Are No Longer Taboo
By @DentistGoneBadd 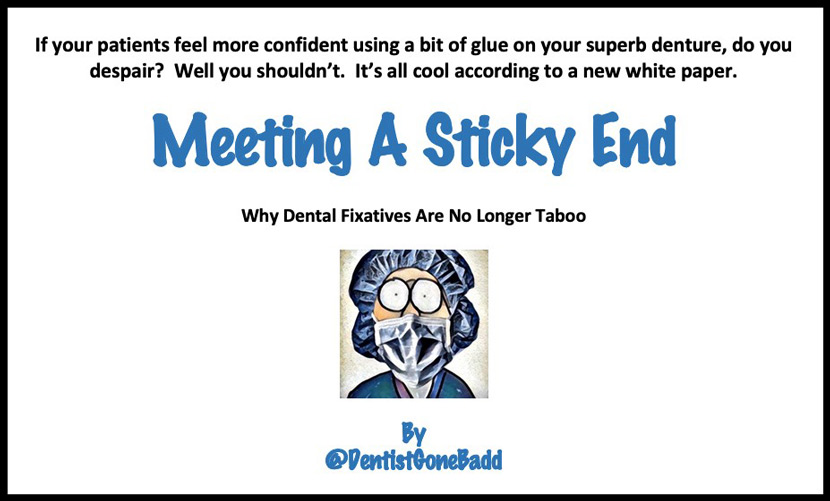 Can We Fix It?

(Yes, you CAN)
By
DentistGoneBadd

The thing I liked about making full dentures, is that it rarely got icky.

By that I mean you didn’t have to get involved with glass ionomer, etching gels, injections or extractions - you know, icky stuff. I would quite honestly have been a much happier dentist if I’d been able to specialise in full dentures only. I would have rejected referrals for dentures that required fitting over implants – too icky and tricky – and I would have only treated patients who’d been edentulous for at least five years. In other words, I’d have only specialised in smooth, un-knobbly ridges. Otherwise, I’d have accepted any edentulous patients, provided THEY didn’t object to ick.

For from the time I qualified until the day I retired, I shamelessly recommended denture adhesives every time I made a new denture. This past week or so, I’ve been completely vindicated in my approach, by a publication that says recommending denture fixatives is ok.

The ‘White paper on guidelines for the use of denture adhesives and their benefits for oral and general health’ published by the Oral Health Foundation basically said that denture fixatives or adhesives are a force for good and not evil. This was contrary to what they taught us in dental school.

At my dental school, they told us that denture fixatives were pretty much the pus from the boils of Beelzebub and that their use or more accurately, the recommendation for their use was an admission of abject failure.

I say ‘they,’ there was one exception at the dental school, a professor with fierce eyebrows that looked like they were having a gargantuan argument between themselves over whether denture molars should be cusped or cuspless. This prof of prosthetics was a pragmatist and almost in a whisper during a one to one conversation with me at a denture fitting he signed me up on said “Always sneakily pop a bit of fixative on just before you do a fit. It gives the patient confidence from the off.” 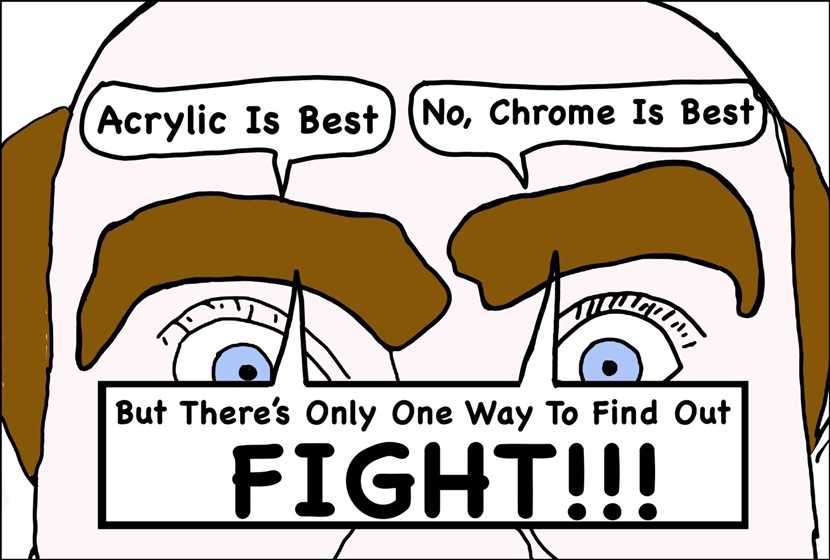 I was never tempted to put fix on ‘sneakily,’ mainly because I thought there might be some sort of rule against that sort of thing, but from my first days in practice, I always put fix on a new denture at fit, to stop that embarrassing drop and clunk within seconds of inserting a couple of huge chunks of plastic on soft squidgy ridges. I mean, I know the theory behind saliva and its amazing adhesive and cohesive properties, but let’s put it this way, I wouldn’t use it to reattach my car exhaust.

At every initial denture consultation I would do my examination, tell the patient we could improve on their current dentures (if I could) and then give the warning that they would need to use fixatives from day one. I rarely had any patient object to the idea of fixatives, since most were in the surgery because they already used them and their fixatives weren’t working particularly well anyway in their current dentures. Very occasionally, I’d have a patient who objected to having to spend a fortune on denture fixative when they were about to spend a ‘fortune’ on an NHS denture. By the time I had explained the alternatives, including surgical sulcus deepening (is that still a thing?) and implants, they were asking which was best – the gooey or the powder? 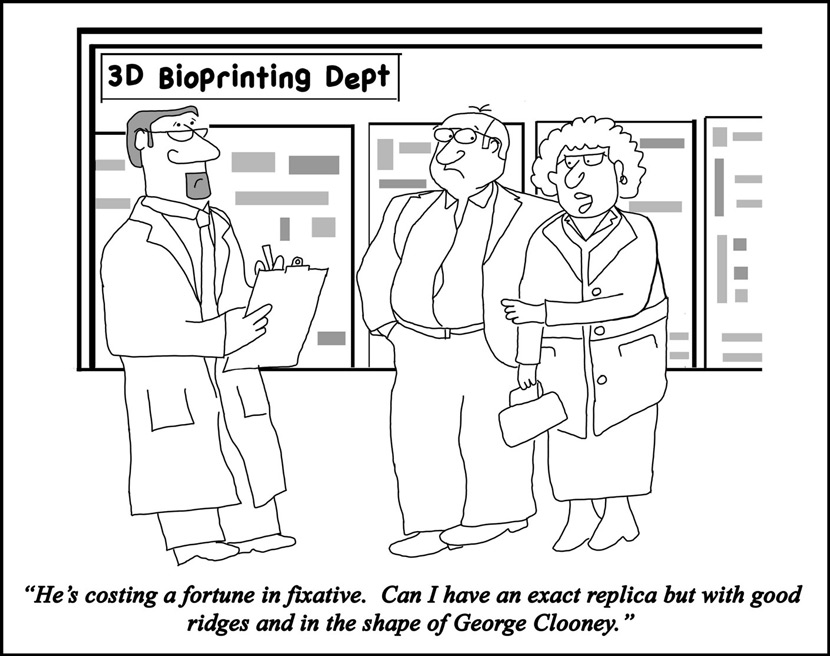 At the end of the construction process, the patients would usually be amazed at how their dentures were staying put with so little fixative, compared to the big gloopy dollops they previously had to use.

I never really understood why prosthetists from pre-implant days were so vehemently against the use of fixatives. It was almost like they were worried that fixatives would whisk away the mystique from the prosthetist’s art.

One of the things I remembered being told at dental school was that fixatives in the mouth long term could feed bacteria and lead to oral infections and if it came into contact with teeth in the case of partial dentures, it could cause dental caries. Most modern denture adhesives contain antimicrobial agents and most modern fixatives don’t, as far as I know, contain the same ingredients as Jelly Babies.

In my experience, denture adhesives would never make a bad denture good. It only worked really well with a well-fitting denture and only if the patient didn’t trowel it on with the slapdash alacrity the gas engineer who has just pointed around my external flue did.

The only real problems I had with it was with misuse. Occasionally patients would come when we were remaking dentures for them and it would take them an age to get the last vestiges off the palate before being able to take impressions. I once had a technician berating me for leaving a bit of denture fixative on the palate. He said it completely messes up the models. He sent me the model and the fitting surface looked like it had been hacked out of the larval flow at Pompeii.

The most inappropriate and irritating use of fixatives was when a patient bought some to recement a crown – usually a post-crown. It took an age to get the stuff out and you could never be certain it had left a smear of adhesive on the walls of the post-hole. By the way, denture adhesive laughs in the face of acid etchant. I also had a lady who wore her Maryland bridge thanks to denture fixative for a couple of months while she was travelling in the States, but the abutments did start to become decalcified by the time I saw her, fed by her newly acquired Coke and doughnuts addiction.

The only other unusual problem I had with denture adhesives was the reaction I used to get from my nurse whenever she saw the stringy bits of fixative hanging from a denture when the patient took the denture out. She used to gag and leave the room suddenly. It transpired that she had as a child inadvertently watched the ending of Invasion of the Body Snatchers. It had scarred her for life and she said the removal of dentures reminded her of Donald Sutherland’s mouth at the chilling end of the film. I’ve looked at the end of the film and I don’t see it.

Perhaps it was Super Wernets. 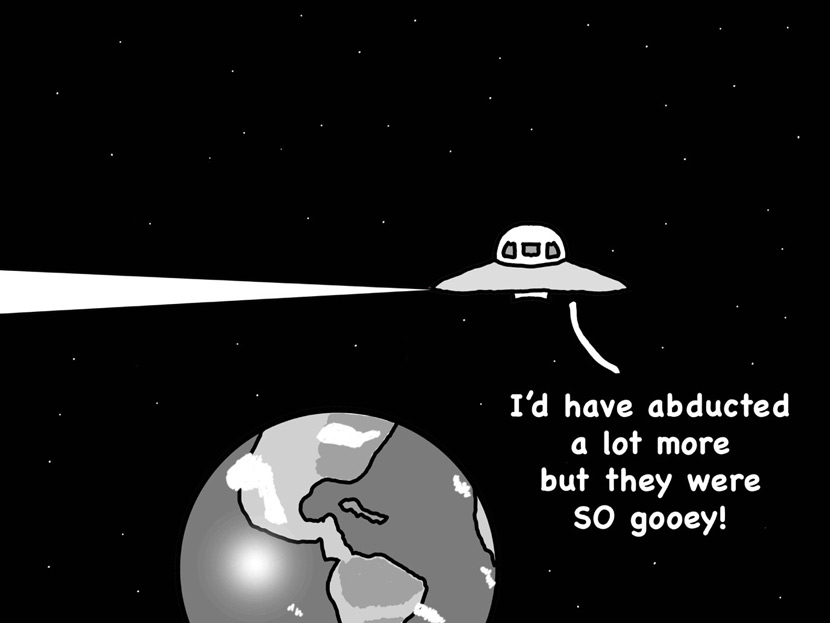