Just Say No - You Can Refuse 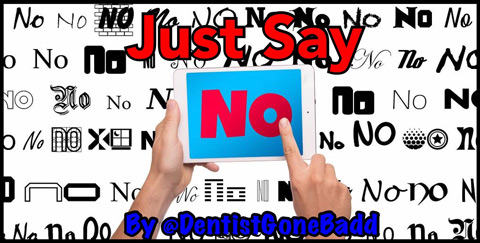 NHS hospital doctors are understandably concerned about refusing treatment if overseas patients can't pay. But is it that hard to deny patients treatment? 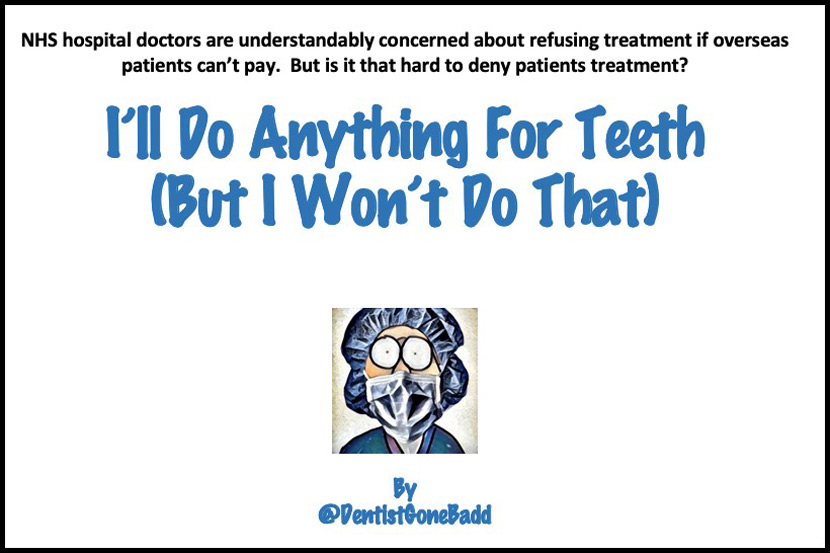 (When It’s Best To Let A Patient Go)

One of the unexpected delights of my premature retirement has been the discovery of Ken Bruce and in particular, his PopMaster quiz. The other day, I was both confounded and infuriated by a man who was so completely inept in his answers, it actually made Trump genuinely look like a ‘stable genius.’ This man’s performance made me so angry that I accidentally stumbled into Jeremy Vine’s show.

One of the subjects Jezzer was discussing was the disquiet among hospital doctors regarding the collection of fees from overseas patients, and establishing the eligibility of patients to receive NHS treatment. I think the other subject was something about Stella McCartney and whether you should brush emission stains off the groin of your jeans instead of washing them. It was unnerving to discover Jez couldn’t put his finger on whether he changes his underwear every day, but that’s by the by. 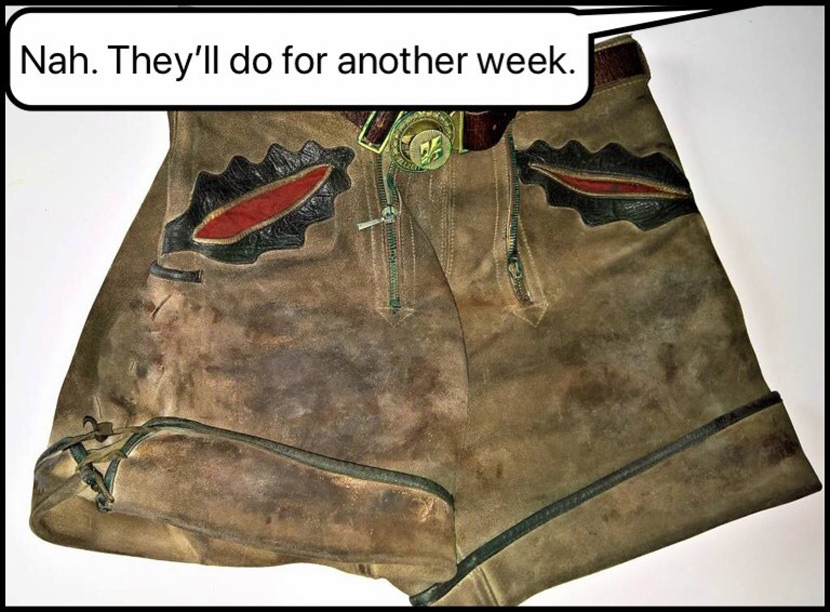 Jeremy had two medics on to discuss the hospital dilemma. One was a retired oncologist and the other a female junior doctor who was speaking on behalf of a lobby group of doctors who are against frontline medics being put in the position where they could be forced to refuse treatment to overseas patients if the latter had no means of paying. I admit that I wasn’t that fussed on the oncologist. I felt he was trying to belittle the young medic.   Although he retired before the regulations were updated in 2017 to introduce upfront charging for non-urgent care and didn’t have to do it himself, he was fundamentally agreeing that fees should be taken from overseas patients, whereas the junior doctor was protesting that the foremost priority for hospital doctors was treating the sick and that her colleagues should not be put in the position of refusing to treat an ill patient if they couldn’t prove their nationality, eligibility for treatment or means of paying.

I fully empathised with the young medic. I don’t know how anyone, when confronted with a chronically sick patient, could turn them away because they couldn’t afford to pay fees. I know the NHS is stretched. I know the NHS is underfunded. But, you know, humanity and all that.

Fortunately, as dentists, we would rarely be faced with such life or death decisions. If a patient can’t afford a crown, they can’t afford a crown. Most of the time we can fix them up with a couple of pins and a maybe not-too-pretty, but at least functional restoration rather than turn them away with a “Sorry, can’t do ANYTHING till you show me the readies.” 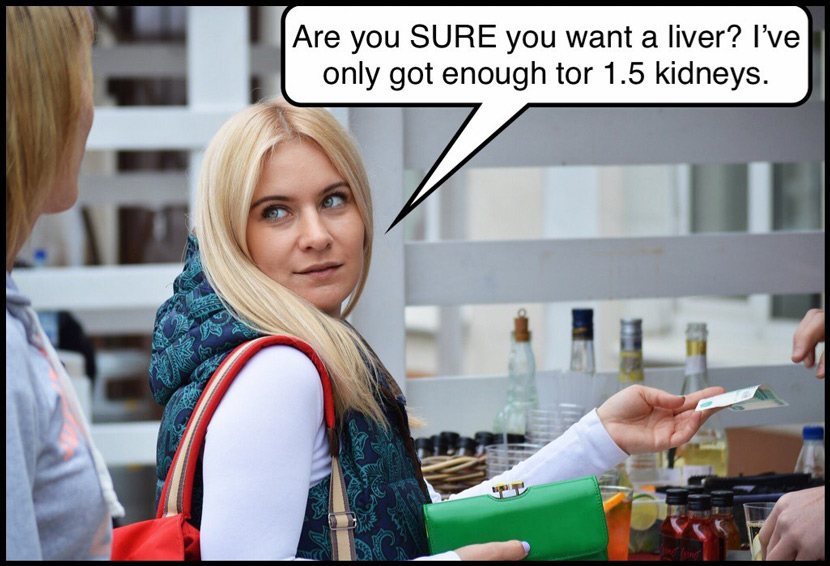 So although I can’t recall ever refusing treatment completely on financial grounds during my career, I HAVE refused to treat patients and I admit I found it uncomfortable, stressful, buttock-clenchingly embarrassing and almost villainous.

A couple of years after I qualified I took an associateship at a place where I was basically used as the practice U-bend. I was sent all the patients the senior dentists in the practice had refused to see, and on a Monday, I was given the dreaded ‘pain-hour.’   Pain-hour was set at 4.00pm-5.00pm and ALL patients who had phoned in on the Monday with whatever problem, were put in there and were told to come at 4.00pm. It was first come, first served, and it was chaos – I rarely saw less than ten people during those hours and the prescription pad burst into flames through sheer biro friction on several occasions. 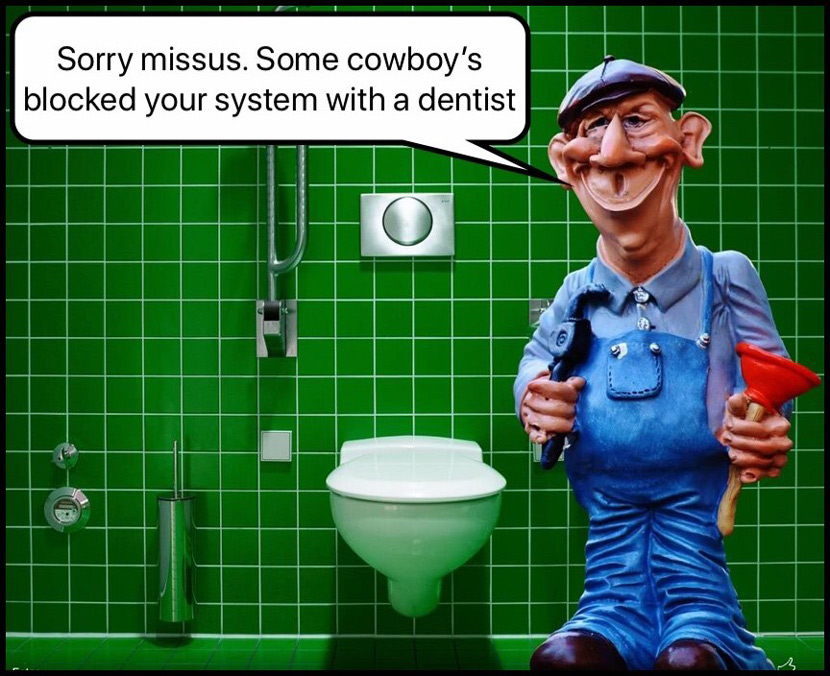 One December afternoon, the first patient in was a woman who I had seen for an examination a year or so earlier. The usual hackneyed trope applied. She had been told that the ‘little chip’ on her lower left five was a distal cavity and I’d also picked up biggish caries under an old restoration on the six. She was warned that they would be trouble, but she declined treatment. She told me that I was making a ‘mountain out of a molehill’ and she’d have the teeth seen to “When I’m good and ready.”

That afternoon, she was good and ready. “I was a little bit concerned, what with Christmas coming up, so I decided to relent and go along with your little plan. You can do them now.” I asked if there was any pain and she said “No, but there might be.” Her general attitude was that of a minor mediaeval land baron chastising a serf and I took exception. I politely (I think) pointed out that the appointment she had taken was purely to get people out of pain and that I probably needed three quarters of an hour to adequately treat her and it wasn’t possible now and she should make an appointment. At that point, she got up out of the chair, ripped off the plastic bib (yes, it was in those days) and flung it at me, saying that she would find a dentist who would. 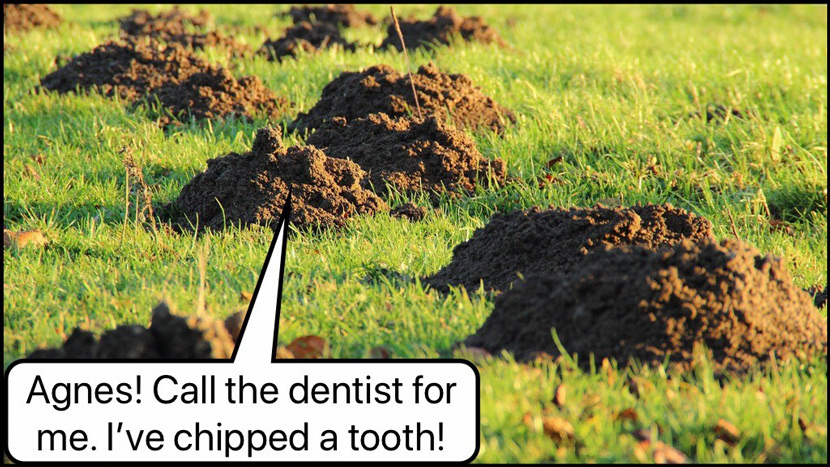 Unfortunately for her, the only dentist in the town who probably would was often the cause of our crowded Monday pain-hour. On that day, four of her patients had turned up in dire need of pain relief after treatments she had carried out on the Friday. We never saw or heard of the patient again. It was at that point I realised I wasn’t so much a U-bend, but more of a sluice gate.

I always referred to Saturday patients as ‘punters.’ Saturday patients tended to have a very relaxed attitude towards appointments, appointment times and treatment in general. Because they didn’t seem to take treatment seriously, I’m sure they thought we didn’t either. We had a lot of DNA’s and latecomers on Saturdays and often the general ambiance coming off a Saturday punter was they were there just for the entertainment.

One Saturday I had a new patient in – the husband of an existing patient. He was in his late thirties to my recall, and he had been booked in as a favour to his wife. She had said he was extremely anxious and need a ‘gentle touch.’ He had already failed to attend twice and I found the new patient to be incredibly bombastic and far from needing a gentle approach. He had a full mouth of restoration-free teeth and apart from a bit of marginal gingivitis, they looked pretty solid. When I said we needed to take bitewings and explained we had to ensure he had no decay, he said “Why do you need to do that if you’re taking them all out?”

I wasn’t quite sure I had heard correctly, but he repeated it.   He demanded I did a clearance and make him full dentures “Or else I’m going to report you.” Even me, with my deep-seated fear of the GDC stuck to my guns. I was not going to do any such thing. “It would be criminal to take those teeth out. They are essentially healthy. All you need to do is brush them a bit more thoroughly.”

I forget all the swear words he shouted as he left the room, but I couldn’t fathom the man’s logic. He said I was putting his wellbeing at risk by leaving him prone to decay.   He added that he was also going to throw his toothbrush away. “That’ll teach your sort.” It was a bizarre encounter and even I was pretty confident that the GDC wouldn’t touch a complaint from him with a double-bargepole.

That patient also reminded me of a couple of patients who threatened to sue before they had even had treatment. One man came in to see me for new partial dentures. I had taken impressions and as he was going out of the door to book a bite and second impression appointment he said “And by the way, if I’m not happy with these dentures, I shall sue.” He got a letter the following day expressing my doubts as to whether we had a good enough dentist-patient relationship to continue with treatment and he should seek treatment elsewhere. This was in the eighties. I THINK this was acceptable back then, but I did it anyway. 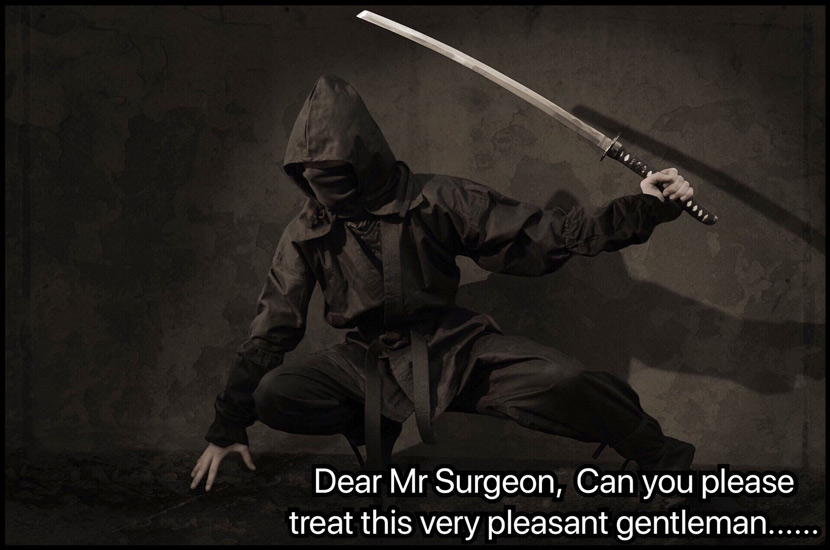 The other patient was mine, but the oral surgery consultant to whom I had referred him, refused treatment. This patient was new to me but had experienced twelve episodes of infective endocarditis following dental procedures. He had an infected root that needed removing and I referred him to the local oral surgery department. The oral surgeon later told me that he sat in the chair and said “By the way, If I get a sniff of endocarditis, I’ll sue.” The consultant (a really nice bloke by the way) said “In that case I won’t do the extraction.” There was a silent standoff apparently and the patient said something like “If that’s your attitude, I’m off.” Fortunately, I didn’t see the patient again either.

When I got my own practice and a few year’s worth of experience under my belt, I had a young woman I hadn’t seen before booked in for a ‘problem.’ She had an imbricated and rotated upper right lateral, which did make it stand out quite significantly. She demanded that I ‘smooth it down a bit’ so that it wouldn’t show up on her wedding photographs. Her wedding at that time was two days away. I was sympathetic to her dilemma but pointed out that it was a healthy tooth, such a procedure would remove the white enamel, I would go into the yellow dentine and (almost certainly) the pulp and it wouldn’t produce the effect she desired. I don’t remember her precise words but the gist was that I was denying her ‘essential’ medical treatment. The whole waiting room could hear her screaming “That was a f*****g waste of time” all down the stairs.

Anyway, thrice-married Major Bolshey-Chump was a bit of a dandy who wore a cravat and a regimental blazer. Virtually every visit he used to tell everyone that “In the good old days, I used to mount the Household Cavalry.” Nobody ever had the courage to ask what that meant exactly.

We dreaded him coming in, he was so rude and arrogant. He lived in a town house about 50 yards up the road from the practice and about 30 minutes before an appointment he would ring up to ask if I was running on time because “I can’t stand sitting in that nasty little waiting room of yours.” One day, I’d had enough. He had berated the receptionist because he had to wait about a minute. He called her a liar and leaned across the reception desk, screaming in her face. 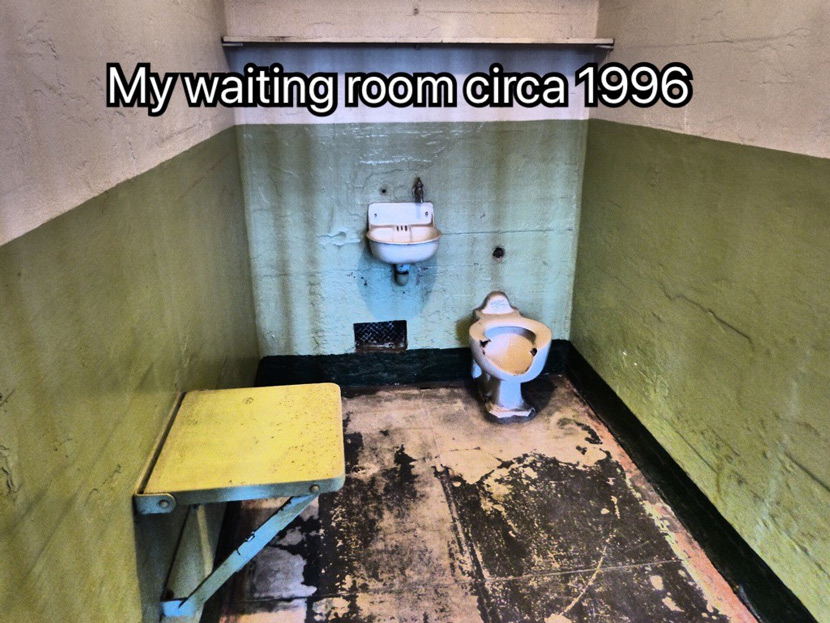 That night, he got a letter from me directly through his letterbox, telling him he was no longer going to receive treatment at my practice.

Actually, now I come to think of it, refusing treatment isn’t that hard.