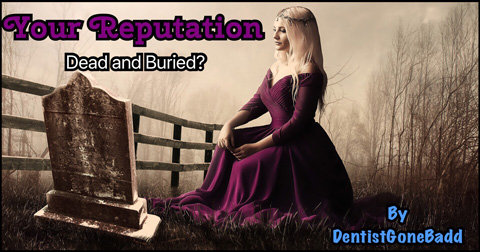 "I Vaguely Remember Him. Was That The One With The 'Tache?"
What Will Be YOUR legacy? 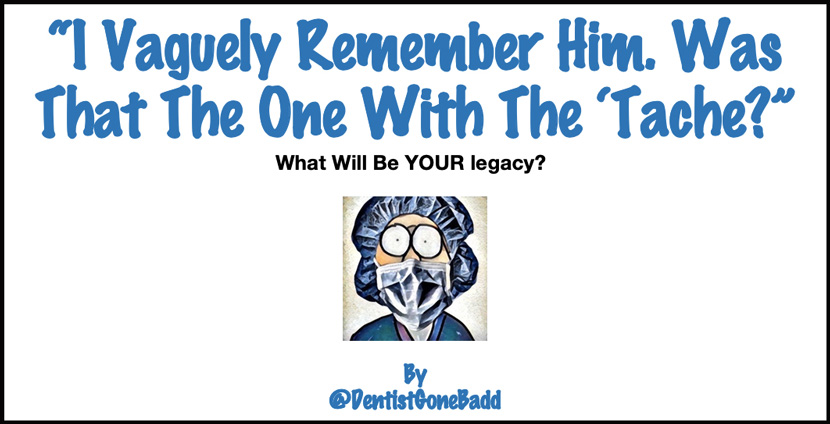 I decided this week, that I would abandon the world of politics in my introduction and instead, write about something cheery.

So last week, I found myself on the road to Cornwall, some 180 miles from where I reside, to attend a funeral.

Happily, it wasn’t the funeral of someone I knew well (does that sound insensitive?). The old chap who fell off his perch was the father of my wife’s best friend and he was buried in a little village churchyard on top of a hill. It was the sort of place Ross Poldark would choose to lay low after France threw him out because he had the wrong colour passport. He’d hide in whatever the Church of England equivalent of a priest hole is, until the BBC brings him back in 2025 to cheer us up when the post-Brexit economy has gone belly-up. Damn. I tried so hard, but I still had to bring politics into it.

As funerals go, it was a jolly affair. We were told to wear bright colours and I thought I looked quite fetching in an orange paisley cravat with freshly laundered spats. Although I fitted in sartorially, my beloved and I were in the minority in that neither of us were wearing hearing aids – I’d left mine at home. We sat in the back and I was able to identify and count the aid-wearers. We were definitely in the minority. I normally only wear my in-ear hearing aid when I’m at social functions so that I can really focus on the inane chatter of the half-trollied. My hearing loss is related to tinnitus – which literally sounds like a well-lubricated and well-running turbine. It’s a constant reminder of thousands of inappropriate NHS crown preps. 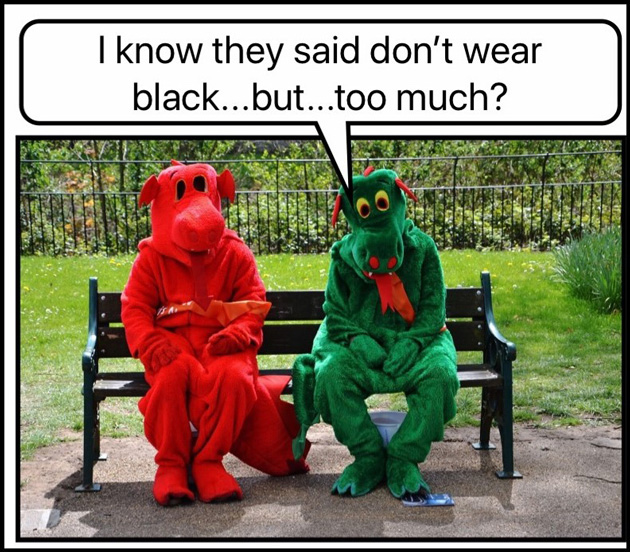 The only big thing at odds with the Christian service, followed by the solemn burial, was that Bernie was a committed atheist but still wanted to be buried in the churchyard - fair enough I suppose, a lot of his relatives were also interred in the same burial grounds. So knowing he was about to join the choir invisible and despite his beliefs (or non-beliefs) he insisted on the whole C of E shebang.

It turned out that Bernie (‘twas not his real name) was a good sort. He was in the Royal Navy at one point, ran the village shop and had a boat and a dog.

Bernie entered the church aided by six burly men from the funeral home to Frank Sinatra singing ‘I Did It My Way.’ I wrote about it on Twitter and it inspired a lively debate about what tunes dental people would like to exit this world with. After giving it some consideration, I think my main tune would have to be ‘Boom Shack-A-Lack’ or anything by the Bee Gees.   God forbid I’d simperingly creep out to Bette Midler’s “Wind Beneath My Wings.” 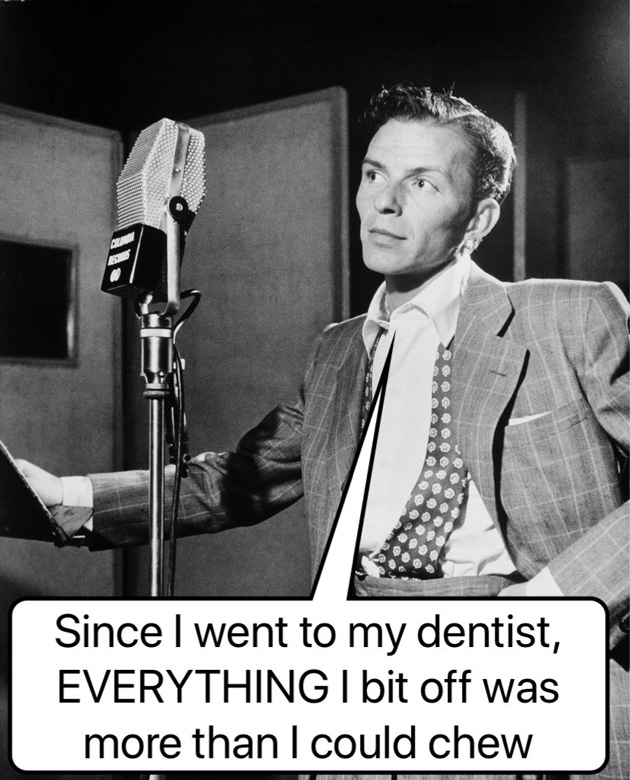 But Frankie got me thinking, did I do my life MY way? Or did the hurricane of dentistry gather me up in its formidable biceps and dump me in the Cesspit of Lost Dreams. And if I DID do it my way, would anybody care or remember?

Bernie left a daughter and granddaughter behind, together with loving nephews and nieces and friends, but it made me wonder, what else did he leave behind? What do any of us leave behind? I suppose it’s an age thing, but having attended more and more funerals over the past few years, I find myself wondering more than is healthy, if I’ve made the most of my humble existence.

What IS the legacy of any dental professional?

Unfortunately, like us, our patients won’t live forever and our work, like Bernie, will either be buried under six foot of loamy soil near Penzance, or shot into the atmosphere near Kircudbright, for reconstitution and incorporation into a bluebell wood where locals take their dogs for emptying.

I mean, it doesn’t matter how great your six-unit bridge was when, as John Cleese succinctly put it in the classic ‘Dead Parrot Sketch’, it’s owner’s 'Metabolic processes are now 'istory!’ and the only creatures that can attest to its durability are the nematode worms that are finding the A3 porcelain ‘a bit chewy.’

Isambard Kingdom Brunel’s Clifton Suspension Bridge will almost certainly be still standing when humanity has been wiped out by the wind farms (wind turbines cause cancer according to Donald J Trump, don’t you know), whereas your bridge will be lucky to survive a 14 Piece Party Bucket of Kentucky Fried Chicken. 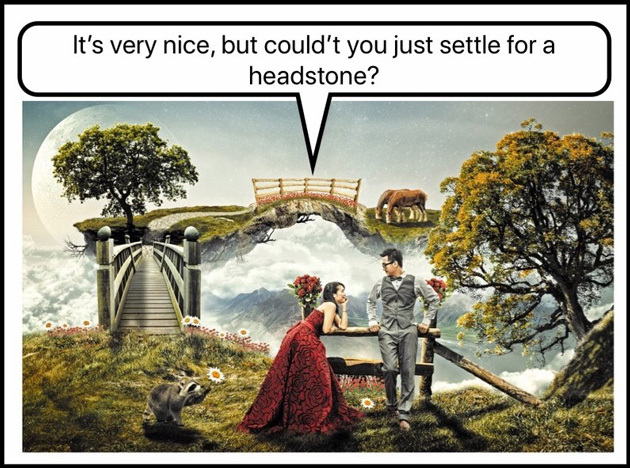 Around the time I was taking BDS finals in the late 80’s and was mithering about presentation cases, I recall a story about an Icelandic dental student who, near finals, had the misfortune of discovering his presentation case patient had died shortly before he was due to present his work. This was a couple of years before the internet went completely webby and so I’ve been unable to find the story, but to my recall, they exhumed the remains and the student’s case was assessed. I can’t remember whether it was a restorative case or a denture case, but I prayed my own presentation patient – a petrochemical engineer who lived for Pils lager, didn’t succumb to liver cirrhosis until the external examiner had left the building.

The one silver lining in the cloud of death is that at least your mistakes are buried with the deceased. I know little of embalming fluid but I would imagine it makes the gums look a more healthy pink in those who have a florid gingivitis. I vaguely remember our anatomy cadaver had a greyish tinge around her gums and the formaldehyde seemed to tighten everything up, especially, I would imagine, the gingival cuff. So, unless the NHS rules change and they bring in post-mortem periodontal checks by the RDO on your claims, they’d find it difficult to ram a BPE down a pocket and find the grid isn’t all 0’s and 1’s like they had apparently been since you started treating the patient.

Be honest, haven’t you at some time fantasised about your most troublesome patients walking hand-in-hand with the Grim Reaper to the shores of the River Styx, only stopping briefly to sign the FP17DC and favourably fill in a Family and Friends feedback form? I mean the really evil ones. The odd ones that would wish you harm. Nothing malicious. Natural causes. Peacefully, in the night, with their loved ones by their side? I have. About half a dozen times. It never happened. 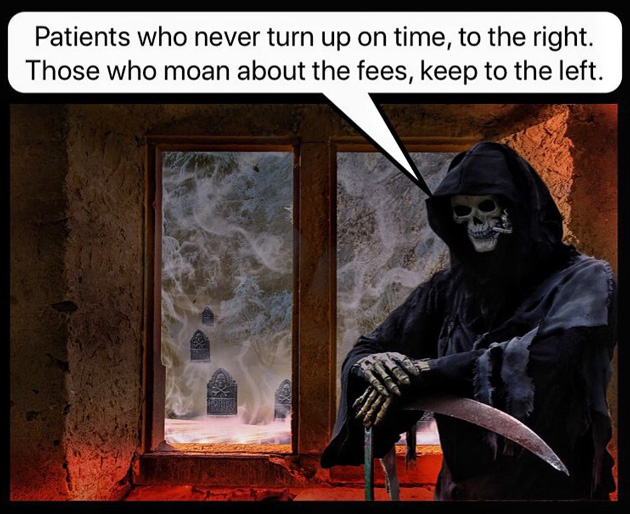 So if you haven’t got a standing, indestructible monument to your memory and work, what have you got?

Fair enough, you’ll have family and friends a tad down for a while, until they find another dentist who’ll give them discount and antibiotics out of hours, but is that enough?

The least you’d probably want is at least your reputation as a clinician preserved intact, with no posthumous destruction of your professional standing in the community. And that’s possibly a tall order.

It’s always been my belief that as soon as you acquire a pine overcoat, there’ll be your patients slagging you off to another dentist who’s tut-tutting and asking “which cowboy has been in here?”

In the city where I live, there used to be a notorious dentist who was known throughout the city as ‘Beckett The Butcher.’ (Again, ‘twas not his real name…but close). I knew his son, who wisely didn’t follow his father into the dental profession. When I first met his son, I casually asked if he was related to old Mr Beckett. “Oh yes,” he said, like the nickname was a badge of honour.   “Beckett The Butcher was my old dad.”

Apparently, Mr Beckett was very much ‘old school.’ He believed that there was no gain without excruciating pain, but despite that, he had a big following…who all slagged him off when he was safely six feet under. 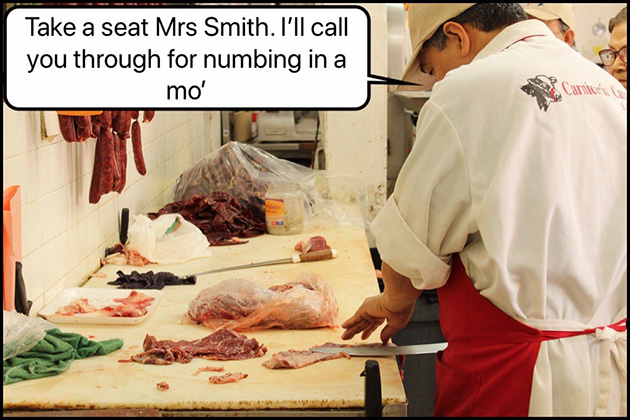 So unless you invent a dental technique or an instrument, you will have to accept you’ll leave little in the way of a permanent legacy behind you in memory of your superb clinical skills.  And those patients who will for a while attest to your love and care, will also Cross the Jordan, taking the warm memories of how you used to give you topical anaesthetic with them for all eternity.

On the other hand, people like W Warwick James will be forever remembered by virtue of that elevator with the funny end that nobody uses any more, and Dr Clayton Gracey will forever be known for the curette that no dentist ever knew in what circumstances  it was used.  Alain Rochette will be remembered as the inventor of the resin-retained bridge of which young dentists say “A WHAT bridge?,” and who can forget Barbara Broach, the creator of the spiky barbed broach?  On the other hand, some inventions have been lost in time.  Remember Fish Packs? No, of course you don’t.  Poor Professor Billy Fish.

On the other hand, you might want reference to your career expunged from the record forever.  I would dread future archaeologists sifting through the GDC archives they retrieved from under the rubble from World War III, to find the cautions they gave me for using an x-ray I took six weeks before a crown prep, wasn’t adequate or timely.

I think I’ve answered my own question really, what will be my legacy?

Other than helping mankind?  I suppose I’ll have to be satisfied with that. But will mankind be?