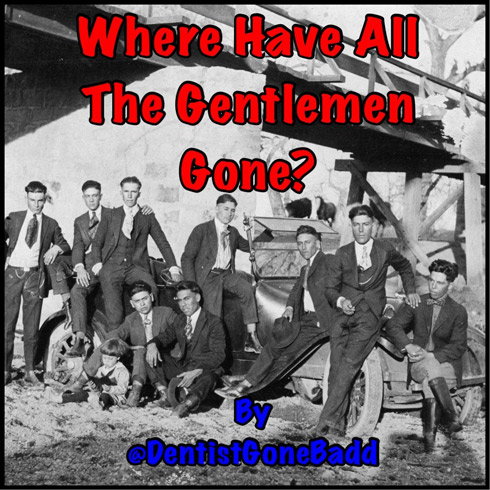 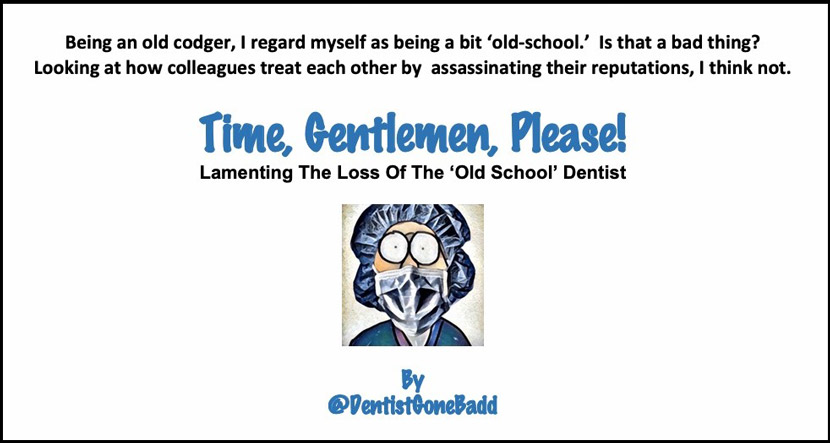 Gentlemen, Gentlemen, Please!
Where Has Gentlemanly Conduct In Dentistry Gone?

I don’t want to give the false impression that I spend the whole of my retirement eating out or drinking hot chocolate in exotic coffee bars, but like last week, I start my musings by outlining a pleasant meeting with ex-colleagues, this time, in a pub.

Anyone who follows my lunatic outpourings on my Twitter feed may have picked up that on the very last day of my career in dentistry (New Year’s Eve 2018), I went down hard with a virus that has plagued me for well three months and contributed to the re-fracture of a rib I broke near the end of that year. The reason I mention that is that near the top of my list of things to do during my retirement, was meeting up socially with a couple of my first dental bosses.

Finally, last week, feeling reasonably able to lift a half of diet Coke, I met up with Owen and Ben (not their real Christian names) for lunch. Joining us old codgers was Ben’s wife Livia, also a dentist, currently taking a break from dentistry to pursue something sane. 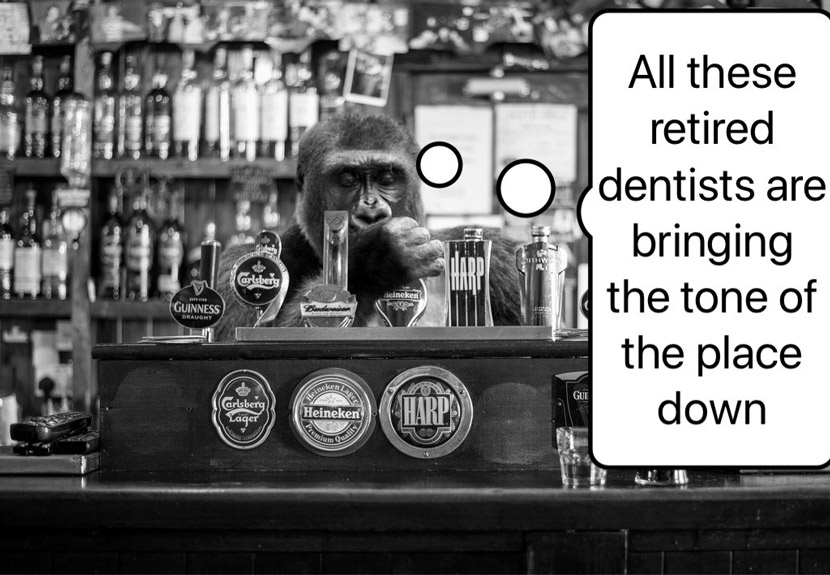 I last worked with the boys at the beginning of the nineties and though I have only kept in touch spasmodically over the years, their influence pretty much moulded the way I chose to practice over my thirty plus years in general dentistry.

I first met Owen and Ben when they ran a successful practice in a city on the Welsh border in 1989 and took me on as a relatively newly qualified dentist. I was about 34 years old at the time so I was grateful they would take on a mature graduate and treat him with the same tenderness they would apply to a sobbing child who had just grazed his knees after falling off a swing. 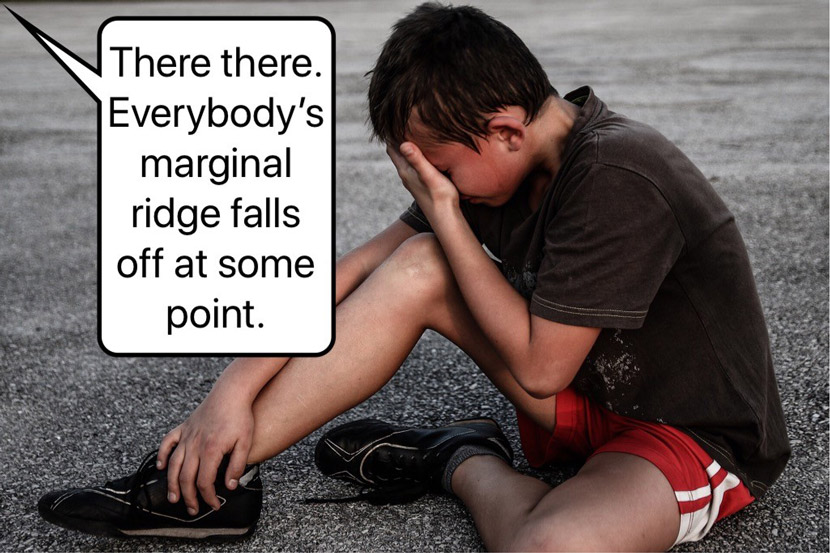 Despite being ‘mature’ I was full to the brim of the same lack of confidence that affects many new dentists in their first tentative steps into practice and Owen and Ben were always willing to come in and give an opinion or lend a hand and were never critical of anything I did or didn’t do, but gently outline the way, perhaps, they would have done it.

I remember one awful session where I started to take out a mildly impacted lower eight on a young woman and halfway through, she started to lose anaesthesia very quickly. I couldn’t get her numb and so I ran to Owen. He came in. I introduced the patient to Owen. “This is Mr Jones. You’ll be fine with him. He trained at Dewhursts.” After Owen had administered a deft and effective block, he flicked the tooth out with a Couplands, rendering my ample soft-tissue flap, completely redundant. He left the room with a “That was a very difficult one,” which saved my face in front of the patient. He gave me a tip on future surgical procedures later that afternoon and at no point was he critical.

I always remember words from Owen which stayed with me and which I passed on to younger dentists over the years: “If you are a caring dentist, you’ll never be a bad dentist.” And I think that is true. If you care about your patients, you won’t get into a poor way of working and will provide the best treatment you’re capable of.

So while I was with Owen, Ben and Livia in the pub restaurant, I realised I was suddenly transported back to what I considered to be a much better time – the days when dentists were truly ladies and gentlemen.

Over the past few years, I have noticed a massive shift in the attitudes of dental professionals towards the work of other practitioners.

Generally, I have to say that many of the dental lecturers I met at my dental school were far from being gentlemen or ladies with regard to their day to day treatment of dental students. Many I truly believed were borderline psychopaths who appeared to take great pleasure in the discomfiture of the students they humiliated, but even they never disparaged the work of dentists who sent their patients into the dental school for treatment.

There was a general feeling that to disparage the work of colleagues was unprofessional and the rule was “Don’t criticise a dentist’s work – especially in front of a patient.”  I even remember one particularly unpleasant Reader who once wrote a well-known dental textbook saying “I don’t know how dentists can criticise ANYONE’S work.  You don’t know the circumstances under which the dentist placed that work, so how do you know you could have done better at that time?”

I worked for twenty-odd years in my own practice with two part-time ‘ladies’ who were thorough professionals and optimally discrete.  Similarly, the only other practice in the town was operated by what I would consider ‘old school’ dentists and we had a painfully professional, but friendly relationship with them.  If there was a problem and a patient had turned up at each other’s practices, we would handle the situation delicately – the prime aim was to sort the patient out, not to score points by criticising treatment. I once had to replace a recent crown on a patient for a colleague from the practice down the road.  I did it without hesitation and no charge to the patient, she having bailed me out more than a few times over the years. I harboured no criticism of my colleague.  The patient was a total pain to treat, I just hit a lucky streak and I empathised with my colleague’s difficulties.

I didn’t become fully aware of how the attitudes of dentists towards colleagues had changed until I sold my practice and entered the corporate world.  It was then that I realised that dentistry was entering a ‘dog eat dog’ reality.  I had never heard so many dentists criticising other clinicians, even those in their own practices, in such vituperative terms. 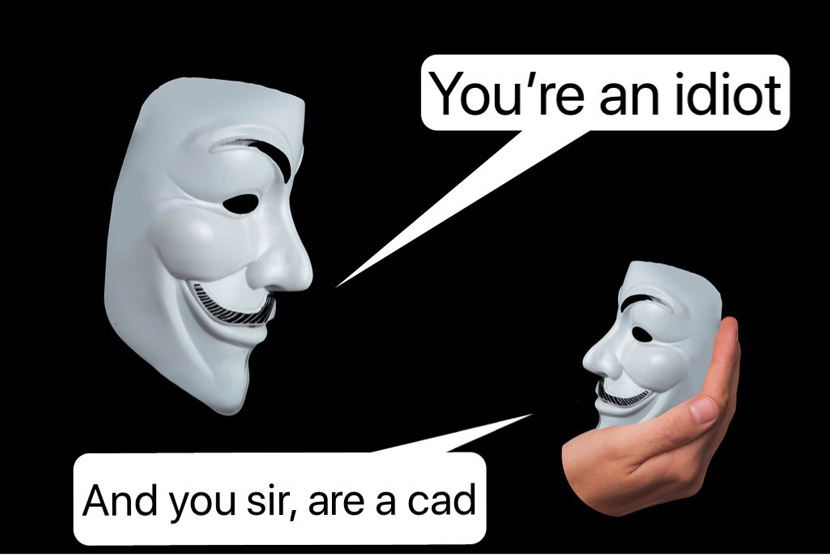 I have no idea what has driven this decline in professional courtesy towards other professionals. It may be that it is mirroring what I consider to be a general decline in the regard with which the general public now views us, AND the medics for that matter.

I feel the change in patient attitudes towards the dental profession has been strongly driven by the increase in the prominence and availability of no-win-no-fee dental litigation. That surely must have had much influence, engendering the notion that if something didn’t go to plan, there must be fault somewhere along the line.

But the driving force behind dentists now slagging off work done by colleagues in front of patients is beyond my comprehension. I can’t get my head around the reasoning. It MAY be that the dentist is effectively saying “I didn’t do that!” to cover themselves. Or could it be that some of the younger dentists – and in my experience it IS younger dentists – are well into an Instagram-like mode of one-upmanship? 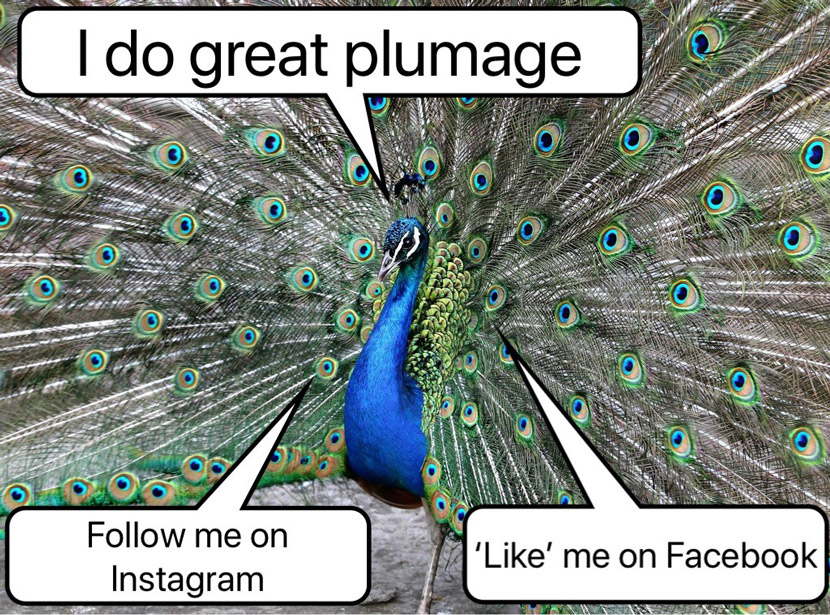 The era of whistleblowing envelops us all, so perhaps the art of being a gentleman or lady has been thrown out the window necessarily, driven by the fear of being accused of negligence for not reporting that amalgam ledge.

I suppose, like all of dentistry nowadays, the sad state of affairs is ultimately all down to the solicitors and the subservience of the GDC, having bowed to the litigation-driven mentality of society over the years. Why else would they make nurses register and take on dental indemnity? Give the solicitors someone extra to sue?

A few days ago, a Twitter colleague, a dental therapist with a military training saved an elderly man’s life when he went into cardiac arrest on a bus. Shauny Boy as he is known and another ex-military man performed CPR until the paramedics arrived. Shauny correctly diagnosed the man, who had re-established breathing after defibrillation, had also had a CVA. Other than being mightily impressed by my colleague’s swift action and diagnostic skills, the thing that struck me about the tale is that a policeman who was first on the scene was openly critical of the bus driver’s first aid skills. What good did that do anyone? Also, Shauny received no thanks.

Am just going off to complain about the lunch my wife has just dished up, to a mate.