The best irrigant is Empathy 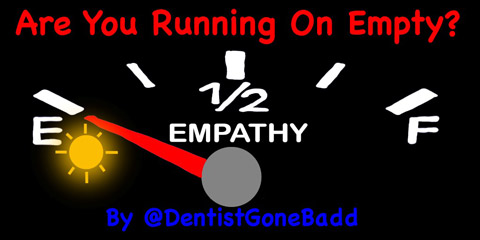 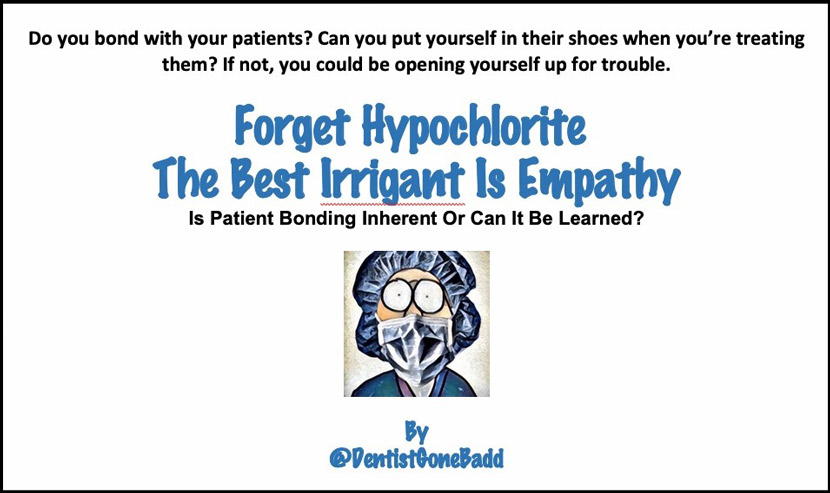 Empathy In Dentistry – Can It Be Learned?

(Be Warned, If You Have Some, You Won’t Earn Any UDA’s From It)

One of the luxuries of being newly-retired from wet-fingered dentistry is that I now have the time to read the online newspapers with a cup of tea while Ken Bruce plays me tunes in the background that I can Shazam and subsequently download on iTunes to play in my trusty little Peugeot 107. I thoroughly recommend John Legend’s Preach and Lauren Daigle’s You Say, pop pickers.

I usually start my day with the Mail Online because it’s both hysterical and hysterically funny and then go on to The Guardian and The Telegraph to get both sides of the argument that the Mail completely missed because it was too focussed on Brexit traitors and little Archie Windsor.

Last week, The Telegraph reported on a study published in Pulse magazine – the journal for General Medical Practitioners. Pulse had published the results of its ‘snapshot’ survey of nearly 1,700 GP’s. Participating GP’s reported on their workload on Monday 11th February this year. The survey basically found that GP’s felt that they saw a third more patients in a day that they deemed to be safe, though the angle the Telegraph used was “Patients should avoid seeing their GP in the afternoon because doctors are so overloaded that they are drained of empathy by lunchtime.” This headline seemed to be based on one quote from a Hertfordshire GP, whose empathy was obviously running on empty on the survey day.

On the day this story appeared, I Tweeted that when I was working in full-time dentistry, my empathy would have been all dried up by ten-past nine in the morning, while one wag said that his would be used up by Sunday evening. I was joking, but from the response to my Tweet, particularly those I received via direct messages, I got the impression that GDP’s, like our GP colleagues, are similarly, if not more jaded by work levels. 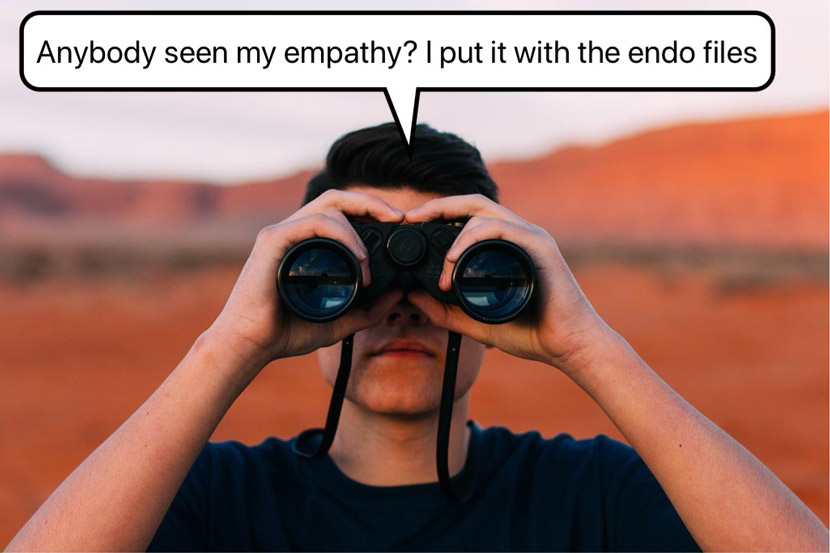 After speaking to a few former colleagues, the Telegraph’s angle on the results of the survey got me thinking: With all the stresses and pressures on general dental staff nowadays, especially in the NHS – is the dental profession mirroring our medical colleagues? More to the point, are we running out of empathy well before lunchtime?

About three years ago, a new family came to see me for exams. The son, about ten, was in a frightful state – quivering and crying because he didn’t want to get in the chair. It turned out that the family’s previous dentist ‘humiliated’ the child when he wouldn’t have a filling placed. The ‘young’ dentist reportedly shouted at him and said “You are trying my patience.”

This incident made me wonder whether this particular young practitioner had run out of empathy or merely tolerance. It could have been the end of a hard day and he may have had a shipload of fidgety groaners in all day. We all know how it is – we even, doubtless, empathise, but the patient and his parents wouldn’t know he’d had a hard day. All they could see was their son being treated with disdain. 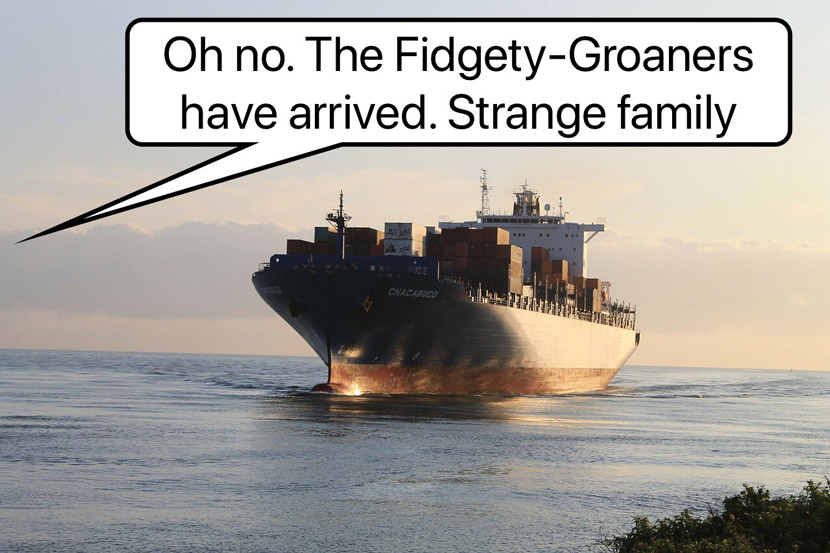 What bothered me about the Telegraph story is that practitioners are potentially leaving themselves open to complaints and I think this applies to dentists as much as to doctors, if not more so. If you go to any talk by advisors from the mainstream indemnity organisations, they will highlight the importance of maintaining a rapport with patients. The breakdown of communications between practitioners and dentists are cited as a major factor in the instigation of a complaint. I have personally been involved in helping (mainly younger) colleagues who have been the subject to patient complaints as a result of the practitioners having either been perceived as being rude or ‘ignoring’ their patient’s needs. In other words, they were not demonstrating empathy. By using a gentle approach and showing the patient was being listened to, litigation was avoided in at least three instances I can think of offhand. All the practitioners involved were under 30 years of age.

Keeping patient and remaining empathetic/sympathetic to our patient’s fears is becoming increasingly difficult with increased workloads and patient demands, but outwardly displaying empathy for our patients, even if we don’t feel the love ourselves, is critical for a professional’s survival in this day and age of rampant litigation.

Is empathy instilled in undergraduates at dental school these days? The importance of using rubber-dam and post-menopausal dental nurses (because they don’t have boyfriend troubles) was certainly rammed down our throats at my dental school, but there was no teaching of basic psychology in order to facilitate approaching patients in a caring way. You would ASSUME that people who go into a caring profession would as a matter of course keep oodles of empathy in their iPhone cases next to the credit cards, but often it would appear this is not so. I have met a few new graduates over the past few years who appeared to have graduated from the Vlad The Impaler School of Dentistry. I wasn’t even aware that this happened these days, but some of them were never actually interviewed before they went to dental school. How can you assess a candidate’s suitability for a medical vocation without meeting them first and evaluating communication skills? 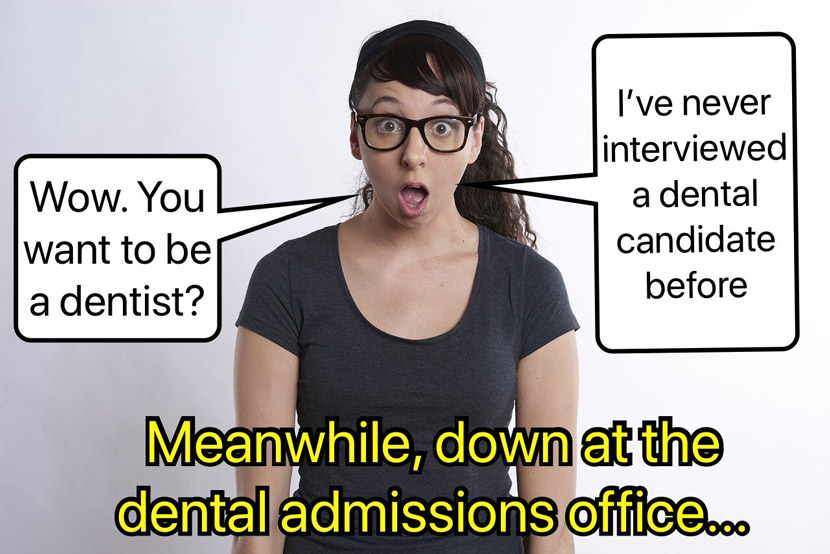 According to the Merriam-Webster Dictionary, empathy is:

The action of understanding, being aware of, being sensitive to, and vicariously experiencing the feelings, thoughts, and experience of another...

In other words, empathy is the ability to ‘fill another person’s shoes’ and psychotherapists would say this is the ability to feel their anxieties and emotions. In medicine this may be slightly easier because most people have had the experience have being ill or mildly ill and can therefore have some knowledge of what it is like to be sick. The problem with dentistry is that many practitioners, because of good oral health, may not actually know what it is like to receive operative dental treatment.

As a practitioner, I freely admitted to patients to being a wimp in the dental chair. I had extensive treatment as a youngster (I was addicted to Spangles and my dentist didn’t seem to mind) and hated every second of it. I had a dreadful gag reflex and if it hadn’t been for my mother assuming that I shouldn’t eat for six hours before a local anaesthetic, I would have felled a partition wall in the surgery, with projectile vomit.

As a result of my fear of choking during procedures, I thoroughly empathised with patients who had the same fear of impressions. I would go to extraordinary lengths to ensure my patients were comfortable during procedure, like virtually boiling the alginate so it would go off before the patient turned blue. 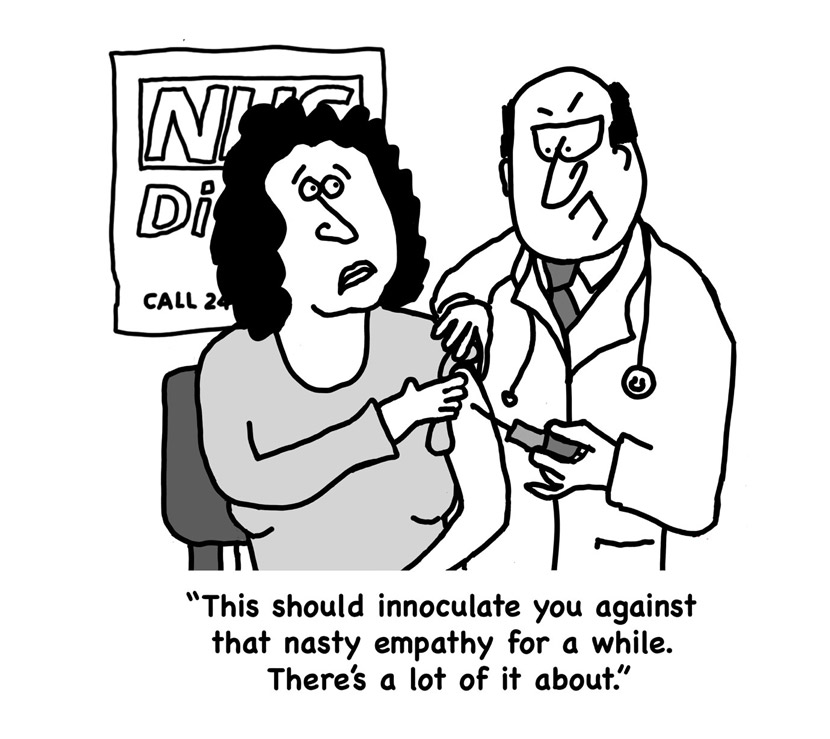 As it turned out, I created a rod for my own back – attracting many anxious patients who though delightful, were challenging to treat.  But the point was, I experienced very few disputes or fallings-out with patients.  Maybe I was lucky, but I have noticed that though a lot of experienced practitioners who have been around for eons are masters at developing rapport, many newer, younger dentists are failing to make that connection – and they are the ones who need to learn the skill more than anyone else.  In the increasing swamp of litigation, developing the ability to ‘occupy the patient’s shoes’ maybe the only way to avoid a time-consuming paperwork exercise courtesy of the GDC.  I fear that many of the younger dentists are not ‘losing’ empathy, but have never learned it.

I’ve long been advocating the introduction of rudimentary psychology into the dental syllabus.  Treating patients is not just treating teeth and if we can all make a big effort to embrace our patient’s feelings, maybe we can reduce the deluge of complaints now swamping the profession. If nothing else, demonstrating a little empathy can smooth patient relations. You’d use a chelating agent to help work through a stubborn canal, so why not muster a bit of empathy to smooth the way.

But if you can’t be empathetic, at least be polite.

Until then, go and hug a lawyer.