50 ways to offend a patient 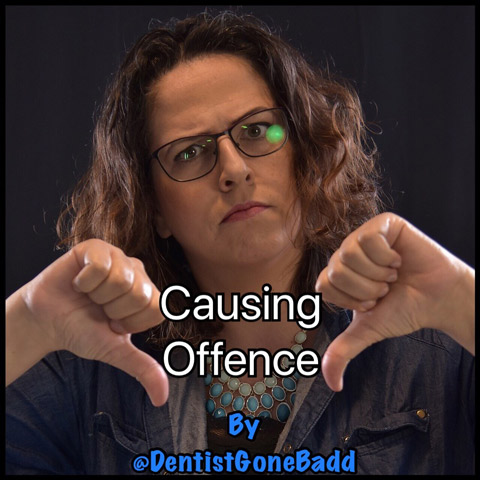 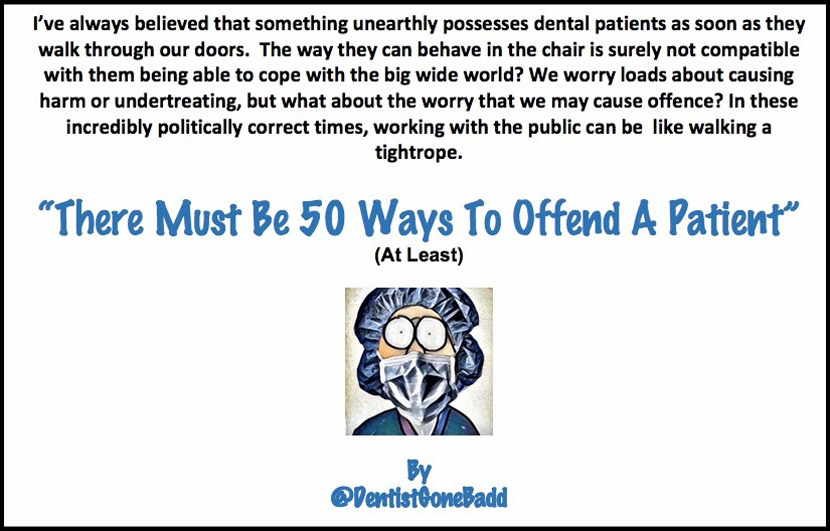 And Another Way Of Offending A Patient Is….

I spent the first two months of my retirement, ill.

My last day in dentistry was New Year’s Eve and I was looking forward to being treated to a meal that night at what I would describe as a ‘posh’ restaurant, by my brother who was in the UK for a visit from his Austrian base. Around the fifteenth pain patient of the day (I was the only dentist in on New Year’s Eve), I began to feel a little unwell. By five o’clock, my nose was like Niagara Falls and the few nurses that were left in the practice were treated to snotty farewell kisses, though two wisely declined my offer.

By the time I had driven to the edges of the West Midlands, I was sneezing with the power of a Space X rocket and my wife and I decided to abandon 2018 and drove home. I spent the next ten days or so in bed and the next seven weeks coughing. I coughed so hard, I re-fractured a rib that hadn’t quite healed from an injury I sustained a month or so before Christmas. 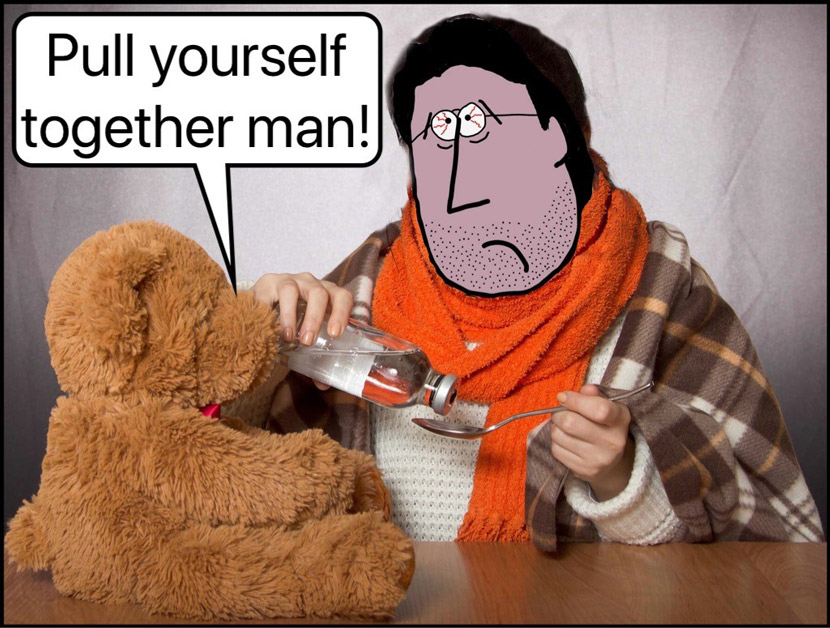 The reason why I flesh this piece out with such stark detail is that while I was feverish and slipping in and out of a paracetamol haze, I did a fair amount of reminiscing about my 30 years or so in dentistry. Well I say reminiscing, it was more a series of spine-chilling flashbacks/hallucinations and I don’t think I imagined a link with concomitant exacerbations of my IBS. 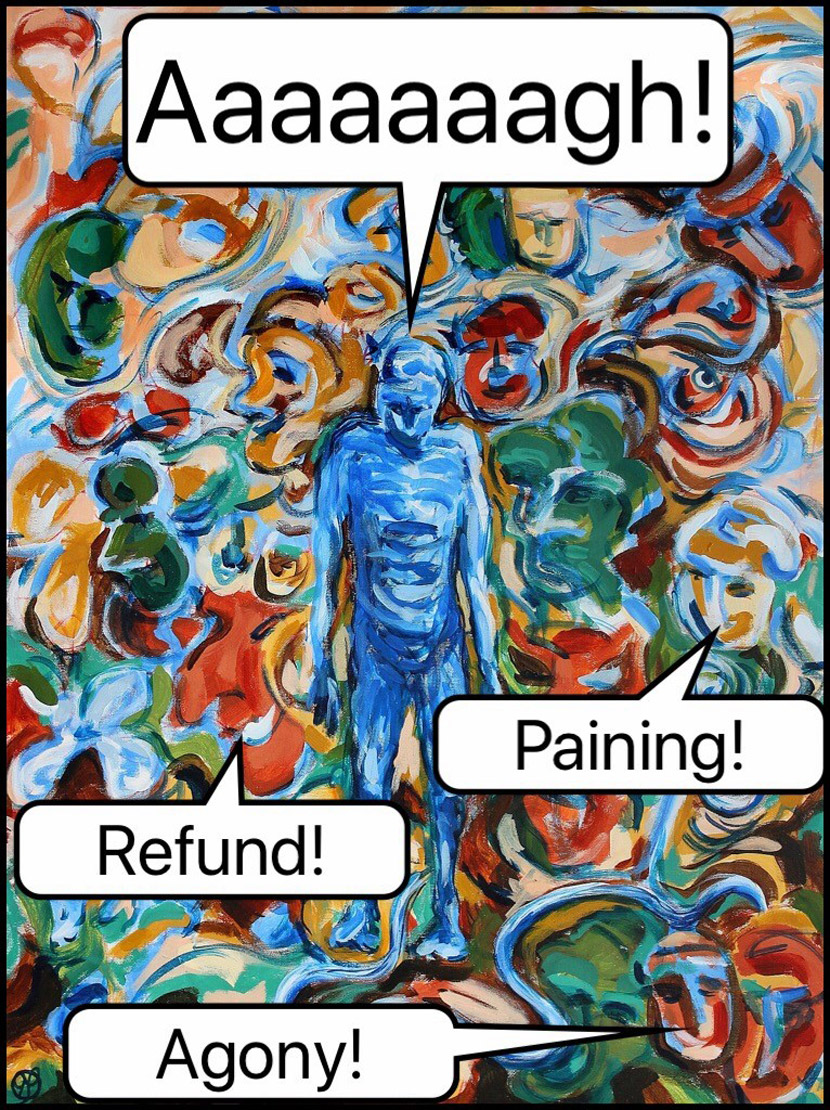 Unfortunately, all my mind meandering was focussed not on the ‘nice’ bits of dentistry (there ARE some people who believe dentistry does contain these parts), but on the nasty bits, and a lot of my memories seemed to always end up with me feeling more than a little embarrassed.

During my recovery from the virus (according to my research, the most virulent infection survived by any person on Earth since records began), I was glued to live streams from CNN. One day I was watching a debate by a panel on a news programme about how people are so easily offended these days and I realised that a lot of my most embarrassing moments in dentistry occurred as a result of patients becoming disproportionately and often misguidedly offended. Here are a few of those moments.

“If I Said You Had A Beautiful Body, Would You Hold It Against Me?”

About three years after I qualified, I found an associateship at a practice in a small market town. I qualified fairly late in life and I was in my late 30’s at the time. One of my first patients, a lady in her late fifties came in for an examination. Under her arm was a parcel wrapped in brown paper. It was obvious it was a painting and later in the appointment I asked her what was within. It turned out that it was a piece of art that she had produced at the art class she had just attended. Being interested in paintings, I asked to see it and she obliged. It was a pretty competent representation of a local view I knew well, though I was not quite sure why The Incredible Hulk appeared to be riding a cow in the background. After a few pleasant minutes discussing her work, she looked me in the eye and asked point blank if I would pose naked for her at her life classes. After nearly spluttering up a lung, I politely (I thought) refused to do it. I vaguely remember saying that it was probably against GDC rules, but she really took the hump, threw the wrapping on the floor and marched out. She never attended the practice again while I was there. I spent the rest of the day whenever I got the chance, looking at myself in the mirror and holding my stomach in. I only saw a slightly paunchy man rapidly approaching his forties. I just couldn’t see what she could see. 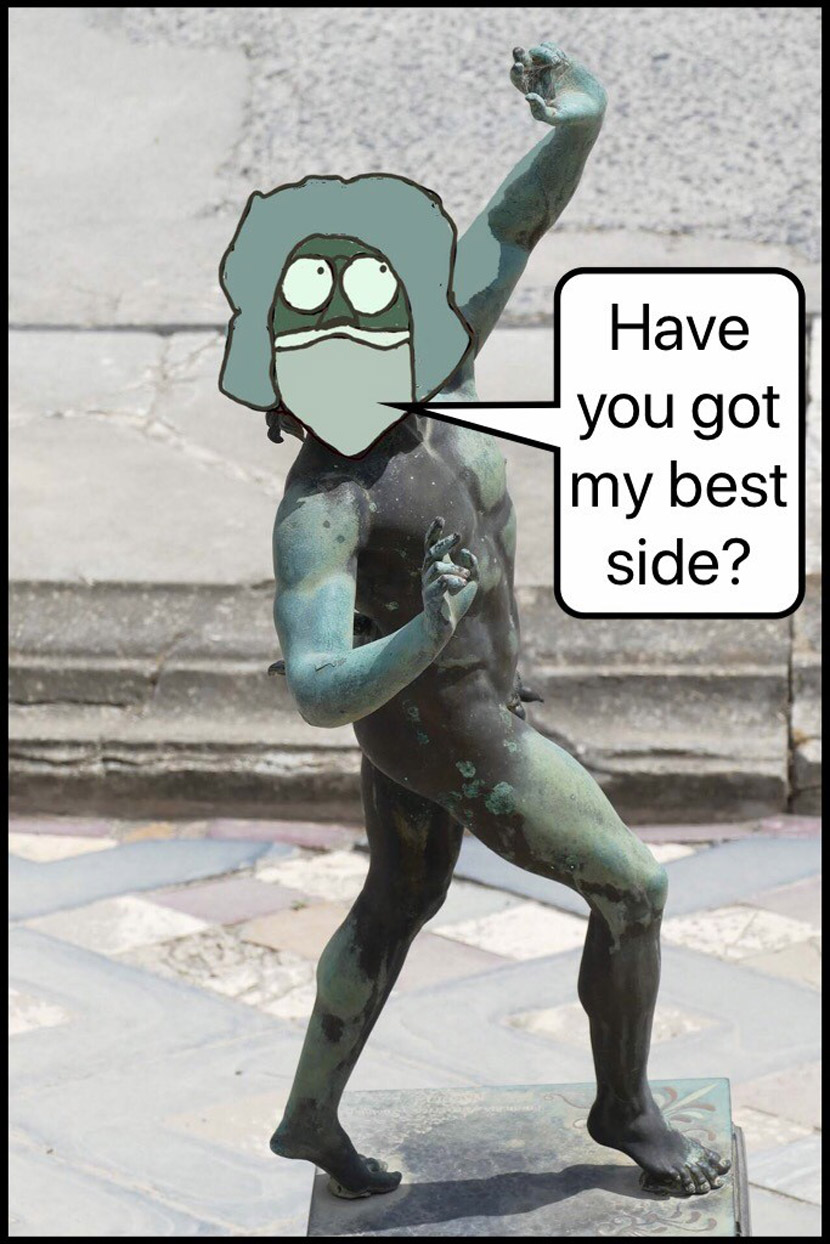 A long-standing anxious patient of mine, whose husband I also treated, attended for the insertion of a nightguard. She was a staggeringly impressive bruxist and frequently fractured minimally restored molar cusps off. She was very reluctant but I had spent some years persuading her to have a nightguard, since she also suffered from frequent migraines, neck pain and a clicky TMJ that sounded like Michael Flatley on uppers. I gave her the usual spiel about insertion and cleaning etc and just to relax her, I advised her to insert it just before she intended going to sleep since nightguards are “A passion killer.” At that point she became very inflamed and said “That’s not a problem, as you very well know,” I didn’t know and she didn’t elaborate. But she said “Is that the sex lecture over?” I hadn’t got a clue what had just happened and neither did my nurse. She attended for an examination with her husband six months or so later as if nothing had happened. I never used that line again. 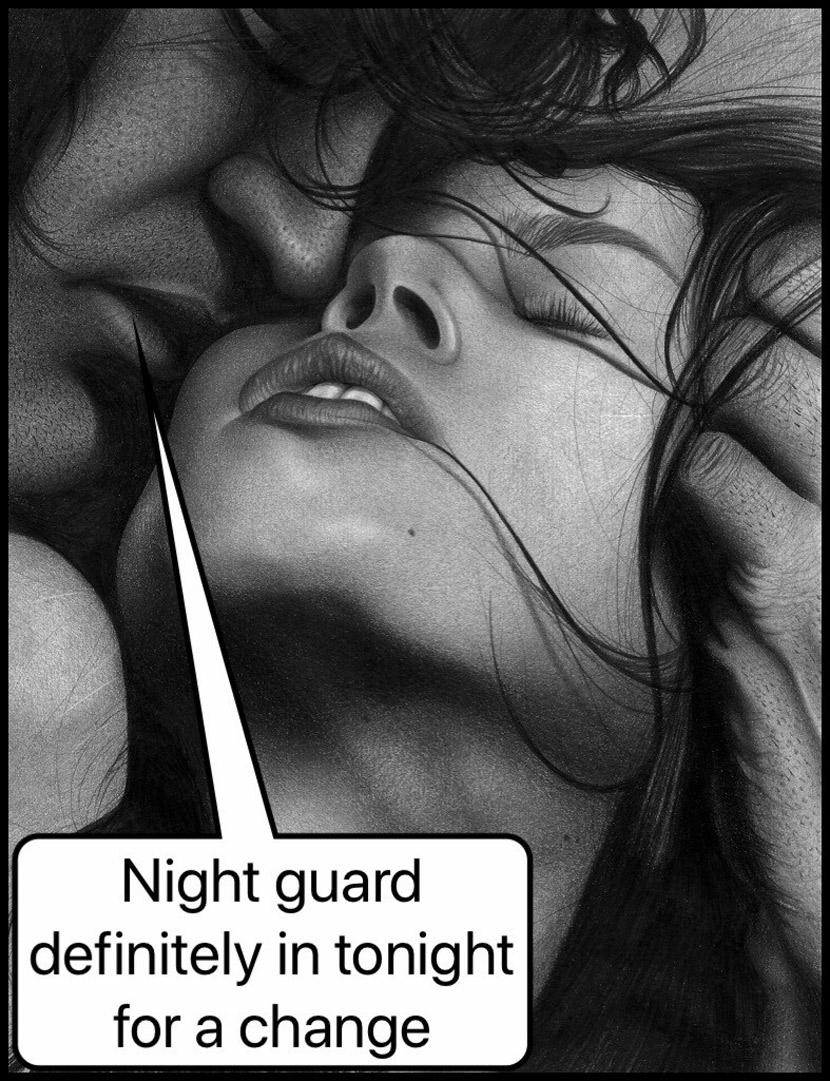 Shortly after I took over the ownership in a new practice, I saw a middle-aged female patient for the first time for examination. She had seen the previous owner many times before and looked a little apprehensive as I carried out my exam. At my dental school we had always been discouraged from probing occlusal surfaces and so I used a triple syringe and mirror only. At the end of the exam she stood up and spat out with some venom: “You didn’t give me a good poking. Mr K***** always gave me a good poking. How can you know what you are looking at without a good poke?” I gibbered for a while about potentially reactivating caries but she wasn’t impressed. As she went out, the receptionist reported that she told another waiting patient that “He didn’t poke me. I’m not coming back.” I always hoped that at some point, a dentist satisfied her with a good poking. It would be nice to think that she found true happiness. 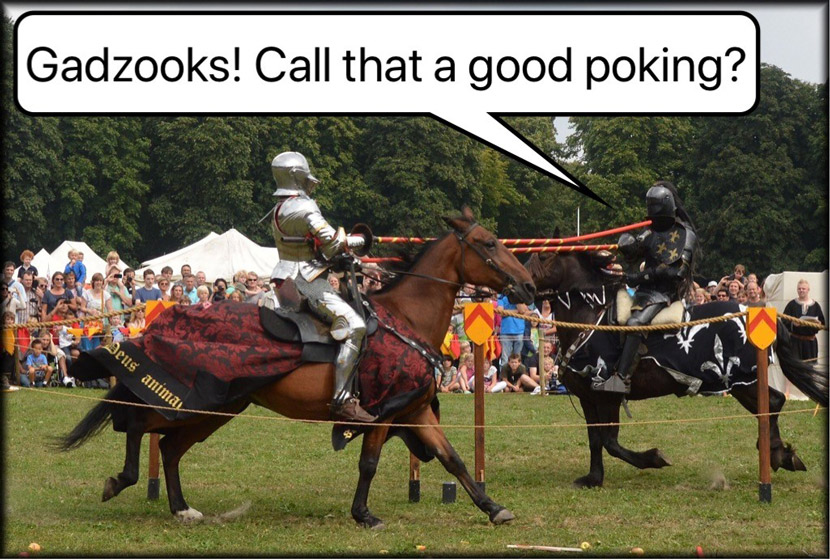 One of the main things I have found that patients get worked up and offended about, is wasting their time. Like most dentists, I think I took great pains to see patients on time, but occasionally as we all know, that’s just not possible. I had three incidents with patients who became explosively offended by the amount of time I kept them waiting.

The first patient had been kept waiting about twenty minutes and came into the surgery just pointing furiously at his watch and didn’t utter a single word during the whole filling appointment, even failing to tell me if he could get his teeth together properly. He didn’t accept my apology and didn’t say anything to the receptionist – virtually throwing his cash at her when paying. At his next exam, he was as nice as pie – probably because I was bricking it to make sure I saw him bang on time. 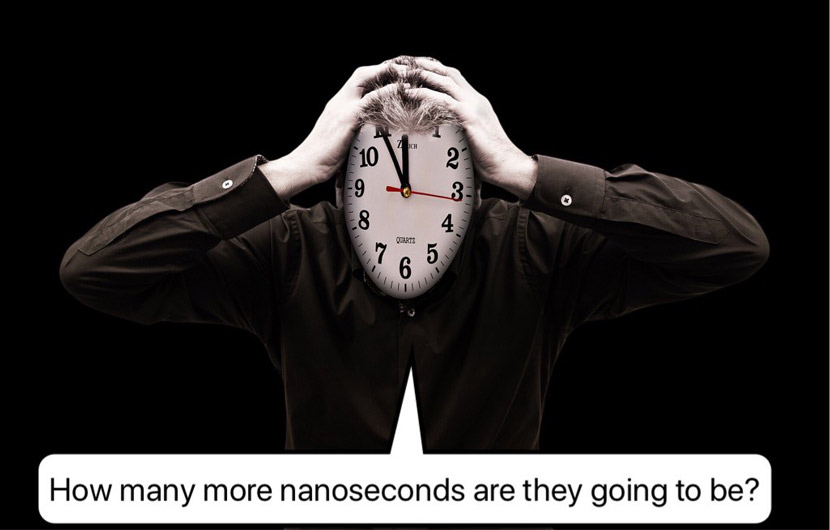 The next one I kept waiting 15 minutes. He was a massive builder in his late fifties – I mean he was huge, not that he made large buildings – and he stormed in with a face like a team of dental nurses had been popping his blackheads 24/7. He screamed and shouted that “9.15 MEANS 9.15” and many years later I was reminded of this incident with Mrs May’s refrain of “Brexit means Brexit.” He was not a happy man. All I could do was apologise and explain that we had run over because of an emergency. It was only when he went out of the surgery that we looked back on his record card and noticed that two years earlier he had been marked down as having DNA’d and then the same day marked down as turning up an hour late for his appointment. I still apparently saw him and removed a tooth. He didn’t come back fortunately.

The next patient to get offended was a woman who was often late but one day was spectacularly late AND rude to the receptionist when she came in. I asked my nurse to rebook her – neither my nurse or the patient were happy, but it was done. The next time the patient was in, I was running early with my current patient when the door of the surgery opened and the patient popped her head around the door. “I was just checking to make sure you were running on time” she said. “Be warned I’m not happy.” Neither was I at that time, but since I was, as I’ve said before, frightened to death of getting struck off, I said nothing. The same woman incidentally, some months later, accosted me in the barbers while I was waiting for a haircut. She had her surly 13 year-old son with her and she dragged him over to me, thrust his face in mine and mauled his mouth open to show me a buccally erupting canine, demanding to know what I was going to do about it. It was a Saturday morning and the hairdressers was full. After she left, the bloke next to me said “Whip the fours out.” By sheer coincidence he was a dentist from a neighbouring town I’d never met before.

And finally, the most ridiculous offence-taking ever. A man left the practice because while he was in the waiting room he had to sit through Tubular Bells III. He said “What about Brahms” as he left the practice. Neither he or his wife ever came back. 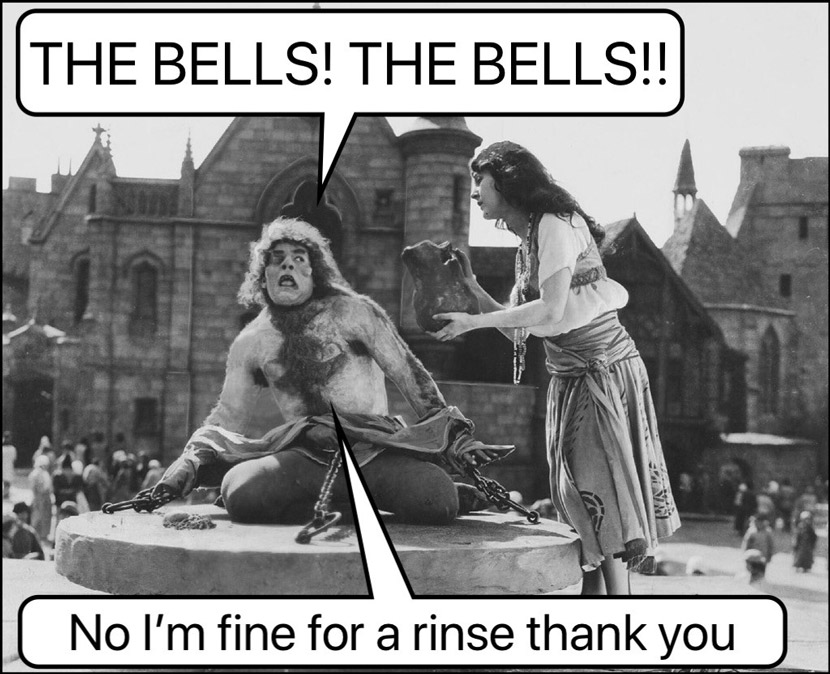 Anyway. It’s late on a Friday evening as I write this. I’m going to bed.