The GDC, winning hearts and minds their own way. 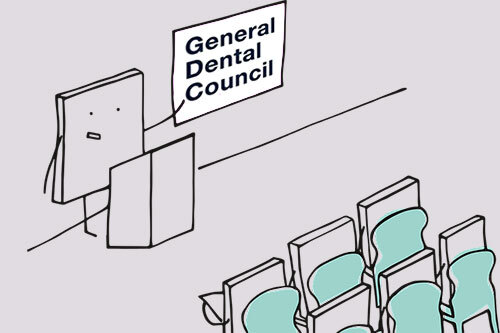 Amongst the many salaries that your GDC registration fee helps to fund is that of Daniel Knight. He has the title of Stakeholder Engagement Manager, where he leads on student and new registrant engagement.

He also heads up engagement in Northern Ireland.

Writing in his GDC blog, Daniel reports on the first two months of the expanded student and new registrant programme. The GDC has developed this “to build positive relationships with new and future members of the dental team.” Daniel, and no doubt a suitably well-staffed supporting team, have enjoyed delivering 22 sessions to around 1700 new registrants and trainees. These included dentists, hygienists, therapists and clinical dental technicians, across all four home nations. As well as “creating positive relationships” they have “highlighted and corrected” misconceptions about the GDC amongst those attending.

The sessions have proved popular with 97% of respondents finding them useful. Daniel quotes some positive feedback. One example that he uses is, “I thought this session was really helpful and reassuring. I was worried about the GDC’s role, as you hear all the time that they are out to get you struck off the register. But I found it so helpful to know that their main interest is prevention in negative events occurring in the first place”

Buoyed on by this success, from April the GDC plan to “target” wider members of the dental team with sessions aimed at each of the dental professions, though this appears to be remaining with those at the beginning of their careers.

In a moment of insight the GDC appear to have realised that they have an image problem amongst those they regulate. They commissioned a survey whose results were published in 2021. Even the GDC had to admit that they did not come out well in it. As reported on GDPUK at the time, negative perceptions of the GDC had actually risen from a bad 45% in 2018, to a worse 58% in 2020. One damming result showed that over time, the number of respondents who felt that the GDC was getting worse, was increasing. The finding that “students were more likely than dental professionals to associate positive words with the GDC”, suggested that the more dental teams came into contact with the GDC, the less they liked it. The action of an organisation that wanted to do better would be to work with the sceptics. The GDC have chosen to work with the group that already have the best opinion of them.

Meanwhile Lord Toby Harris, the GDC’s Chair had a chance to engage via his monthly blog, notable for its fascination in all things non GDP. Just in case there was any doubt, he was at pains to emphasise that, “I’m always mindful that the GDC registers the whole dental team.” This month he had met meet the Dental Technologists and the British Society of Dental Therapists and Hygienists.

It is almost as if they do not care about the group who actually deliver the lion’s share of the nation’s dentistry. Looking at the options being discussed for a post UDA NHS, the GDC’s approach makes more sense. It may be that they have had a preview of the new contract proposals and seen the future. After all, in a fluoride varnish dabbing, ACORN completing, signposting, deskilled, tier one world we won’t need GDP’s anyway.

More posts from author
Thursday, 10 February 2022 No Time To Talk - The GDC and GDPs