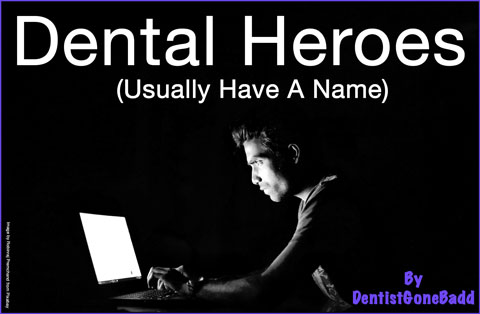 It seems odd at my age, writing the words ‘Dental Hero,’ but Simon was one of them, even though he was only a handful of years older than me. Simon was my first ever dental boss, and he ran two practices, one in the Cotswolds and a newly acquired practice in a large Worcestershire town. 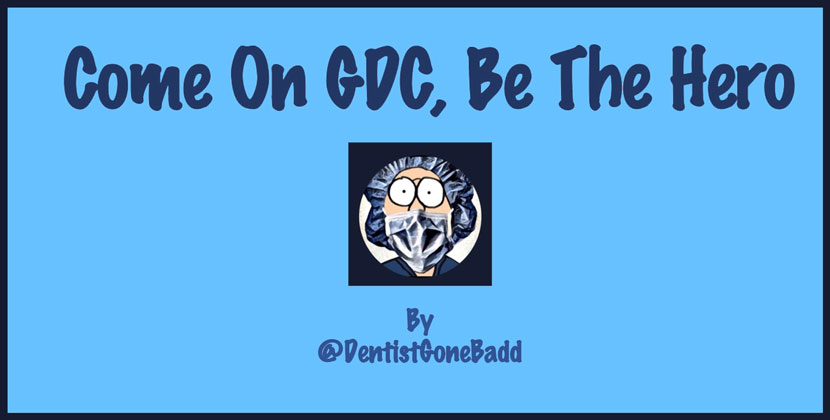 Come On GDC
Be A Hero!

It seems odd at my age, writing the words ‘Dental Hero,’ but Simon was one of them, even though he was only a handful of years older than me.

Simon was my first ever dental boss, and he ran two practices, one in the Cotswolds and a newly acquired practice in a large Worcestershire town.

I was probably  overawed by Simon.  I was fresh out of dental school and as a mature student, was keen to give patients the sense that I had been knocking about for a while. And Simon gave the impression he had knocked about a bit.

Simon oozed confidence and charm, and patients loved him. I wanted to be Simon.

Nothing seemed to faze him. Running behind didn’t seem to bother him at all, and what’s more, the patients didn’t seem to mind either the extra wait either.

Such was Simon’s laidback personality, he thought nothing of strolling out of the practice at 2.00pm, passing the first of the afternoon session’s patients on the doorstep, to nip into Pat’s Café next door for the all-day breakfast special. 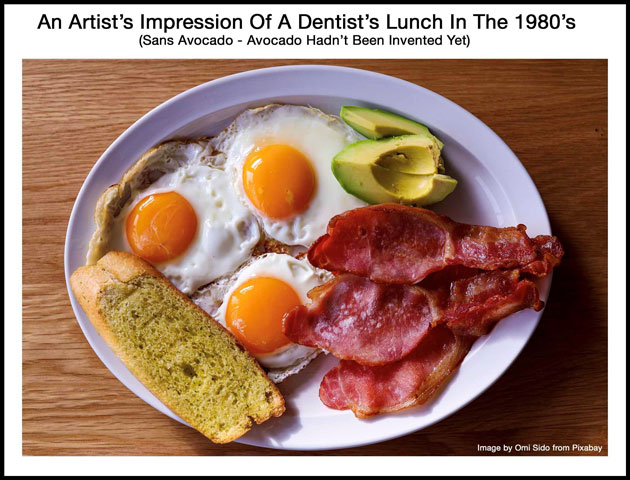 Unfortunately, I didn’t imbibe Simon’s overpowering sense of calm, but I did pick up tips from him on how to approach and treat patients on a personal level. I was lucky to work with other dental bosses who, similarly, had an approach to patients that I tried to emulate throughout my whole career.

For me, the personality of the dentist is immensely important. I really do think that patients can pick up on how they will be treated by any particular dentist, in the first few minutes of the first meeting.

Certainly, it was the personality of one associate dentist I went to in the late 70’s, that cured my lifelong fear of dentistry.

When I qualified and ended up working for him in the early 90’s after he became a partner in the practice, he would get embarrassed when I reminded him of the fact that it was him who inspired me to go to evening classes to get ‘A’ levels to go dental school.

In Dan’s case (‘twas not his name), he was incredibly quietly spoken and gentle – the nitrous oxide undoubtedly helped. But after a few sessions I became a compliant and relaxed patient and felt I was being treated as someone whose fears were being respected and addressed, for the first time ever.

Before I went to Dan, when I was about 18-years-old, I told a dentist I saw as an emergency, that I was a terrible retcher. I thought it only right to warn him. Instead of being sympathetic, he rolled his eyes and then proceeded to give me an ID block.

When his nurse finally arrived in the room, the dentist said to her “His nibs is prone to retching. Be careful with the sucker, I don’t want to pay the cleaner double time for mopping the floor.”

Now he WASN’T an inspiration.

That dentist’s whole attitude reflected the state of his work…actually it didn’t – he was a superb craftsman. He not only got me out of pain, the filling is still there – but I’m sure he was an exception to the rule.

Patients are very switched on to dental personalities.

When I first bought my practice in a small rural town, I asked my predecessor if he would stay on as an associate, to facilitate a smooth transfer. William (‘twas not his name) obliged and I got the impression that patients stayed with the practice on the change of ownership because there was a ‘safety-net.’

One day, I saw one of Bill’s old patients for the first time. The patient at one point made a joke. I think I smiled politely, but didn’t laugh out loud.

I found out later that the patient went to the desk and told the receptionist that he didn’t want to “See that miserable sod again.”

In the corridor as he was leaving the practice, he bumped into Bill and told him that I had no sense of humour whatsoever. In my defence Bill said “There IS a reason for that. His wife died last week.”

Anyway, my point is, it was a rubbish joke.

Another of Bill’s patients objected to my use of the mirror and triple syringe for carrying out examinations instead of using a probe.

She virtually shouted in my face “I can’t feel you. Mr Thompson used to give me a good poking.”

The next time I saw her, she again didn’t get a good poking, but returned regularly for the next 19 years for a ‘tickling’ with that “windy thing.”

The point is, face-to-face contact with a dentist is extremely important. It’s when the foundations of an important relationship are cemented, and trust is built – essential when a patient is accepting your recommendations for an important aspect of their health.

There is no substitute for a direct examination and personal consultation with a dentist. Dental professionals have been going with video and telephone conversations out of necessity, but no one in their right professional minds would CHOOSE to work this way.

So WHY is the General Dental Council going softly-softly on direct-to-consumer orthodontics?

This week, I don’t know what possessed me to do it, but I decided to have a quick look at the GDC website.

The regulator recently accepted that the growing online industry is indulging in the ‘practise of dentistry,’ so why aren’t the GDC clamping down on these people in the same no-nonsense way they are going after non-dentists offering tooth whitening?

We all know well, the real dangers of proposing and carrying out treatments without first performing a thorough examination. Aside from the dangers to the patient of carrying out orthodontics on someone who hasn’t been examined directly by you, try doing it in practice and see what peril it brings to your registration status.

The advice given to patients considering illegal whitening on the GDC website is laudably clear – don’t do it! And they also stress that teeth should be checked before whitening is carried out.

Unfortunately, I somehow doubt that many punters would seek out the GDC’s advice first, before plunging into a jelly of hydrogen peroxide in the pursuit of a Hollywood smile, but the GDC does at least, give it a go.

So, is it not the case that some faceless individual who has never seen anything of your mouth other than a plaster model and on a dodgy video conferencing app, has fallen well below the standards expected of an orthodontist or dentist prescribing a life-altering course of orthodontic treatment?

But if you go to the GDC website and look at the pages on “Aligners sent directly to your home,” you’ll find an entirely different response.

Remember, the GDC’s statement on ‘direct-to-consumer’ orthodontic treatment says “These services fall within the legal definition of dentistry so can only be performed by dentists and dental care professionals who are registered with the GDC.”

In other words, any dental professionals who facilitate these companies to carry out their trade MUST abide by the rules in order to maintain their registration.

But the GDC gives out a very mixed message to patients when it says things like “Here we give you some information to help you think about whether aligners or braces sent directly to your home are right and safe for you” – rather than “run to us and shop them” as they do with the arguably SLIGHTLY less harmful tooth whitening procedure.

The GDC quite rightly asks patients to consider if the dentist is certain the treatment is safe for you.

Well how can he/she be, when they’ve only seen the patient via a transatlantic model taken either by a scanner or a dodgy imp taken by patients themselves?

After all, the prescribing dentist/orthodontist has only seen a rigid bit of plaster and not the real, gum-floppy article.

A short thread this week on Twitter brought up the following tweet from Sam Labadie and raised questions. If an orthodontist’s letter can be misunderstood, how can a virtual consultation not give rise to misunderstanding and confusion? 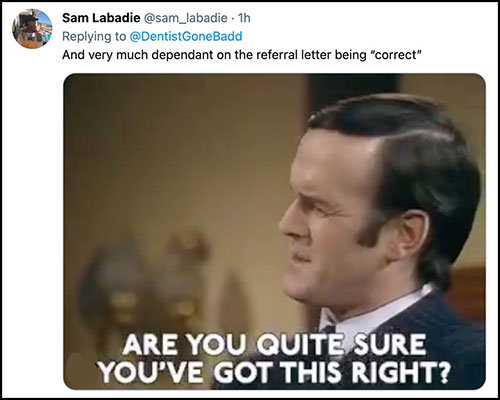 Yes, granted, the GDC does say to patients “If the dentist has not seen you for an in-person checkup (sic), it's a good idea to ask them to explain why you don't need one” – but frankly, I really find that advice a little limp, to say the least.

True, the GDC asks potential ortho patients “Have you given valid, informed consent?”

But let’s face it, ‘informed consent’ is a pretty vague and ethereal concept to anyone outside of the dental or medical field and is usually only introduced into the vocabulary of patients when they have engaged dental litigation firms.

Fair enough, the GDC does ask patients thinking of using these firms to think about the following points:

These are all valid questions, but the GDC stops short of saying “don’t do it.” Advice like that would surely have more impact on patients than a list of valid questions.

Relevant to the thrust of this blog, the GDC does ask the patient to ask themselves “Do I know the dentist’s name?”

Some years ago, just in the pursuit of a tweet, I did contact one well-known direct-to-consumer firm and asked that question. 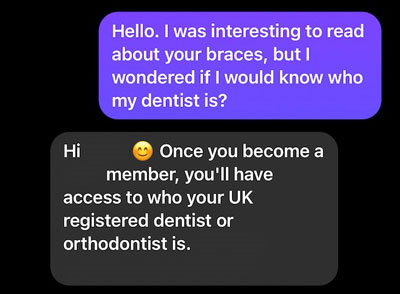 So that’s a ‘no’ then, presumably until you’ve embarked on treatment.

I thought maybe this was just a virtual assistant answering my questions until I asked this question enquiring as to whether I was suitable. (I gave the Zip code of the White House, by the way). 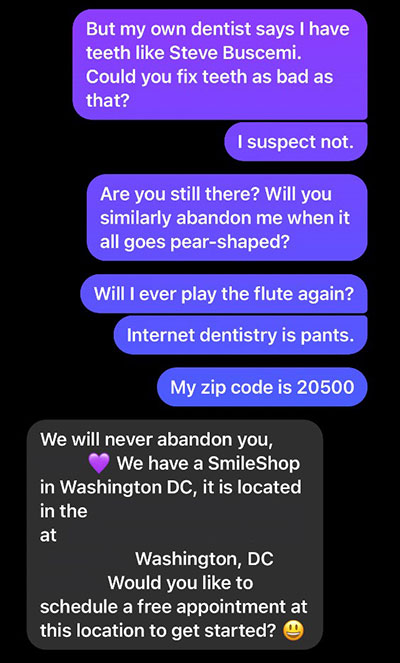 This gave the impression someone was on the other end – he/she had actually corrected the wording of a sentence earlier.

I truly can appreciate the GDC’s dilemma. Many of these companies operate overseas, so are difficult to get to, but the dentists and dental professionals who lend them a hand aren’t.

The question I would ask these companies is “Can you please supply a list of dental professionals who are prescribing treatment for your clients?”

Not that I’m advocating crucifying these registrants, but sending them a friendly note asking them to seriously think about what they’re doing might do the trick.

That would be a simple and effective way of curtailing these operations and ensuring patient safety.

Or would implementing that require someone to stand up and be a hero?

Where have all the associates gone?

GDPUK asks, Should the BDA step back from Toothless Suffolk?

Should dental practitioners brace for a surge in professional negligence claims?