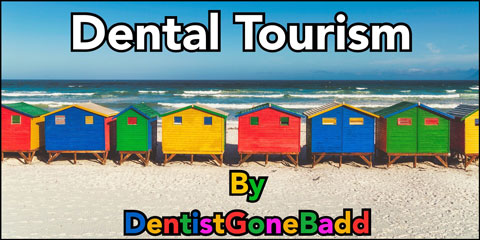 Fair enough, it’s patient choice, but I do wonder whether patients who travel abroad are FULLY informed about treatment options and the potential consequences of treatment.

Beach? No Time For The Beach!

A few weeks after I retired, an old patient I’d treated for about thirty years messaged me. He was a nightmare of a bruxist and when I first took him on as a patient he already had many heavily restored posterior teeth, most of which had cuspal fractures in need of attention.

He was in the practice so often, I got to know him really well and I gave him my mobile number in case he ever ran into desperate trouble out of hours. Neil (‘twas not his name) messaged me one day to ask for my advice on implants. He’d had a catastrophic fracture at his upper left four and the teeth around it, I knew and he knew, weren’t up to being used as bridge abutments. Neil knew all the names of the materials we used and on radiographs could spot an ‘area’ or widening of ligaments quicker than I could.

Neil’s message conveyed concern. He had (I thought) correctly diagnosed that an implant might be a good option for the replacement of the tooth and was seeking my advice before referring himself to an implantologist. I rang him and I concurred. He asked me for a guide price for the work. He also wanted to know if he should also pursue an implant in his lower right six region. This was a tooth he’d smashed to smithereens, that I had to remove surgically a few years previously.

I plucked a figure roughly out of the air which I didn’t think was wildly out, and Neil whistled in a “You ARE joking,” kind of way. I felt bad, but he knew the score. A few weeks later he messaged me to say he’d booked a couple of week’s holiday in Hungary.

I’m not sure of the outcome of his treatment – to be honest, I was too scared to ask. Neil was incredibly savvy dentally speaking and I’ve little doubt he wouldn’t proceed with treatment unless he was totally happy and convinced of the clinician’s competence. That obviously begs the question “Why did he go to you then for thirty years?” Fair point.

A micro storm kicked up this week on Twitter after I posted a tweet about dental tourism. One of the things about retirement is that your mind often wanders despite trying to focus on Ken Bruce’s PopMaster.

Randomly, I thought about a middle-aged couple who I treated for nearly two decades while at my own rural practice. They were both Brummies who had escaped to the countryside and were very pleasant to treat – mainly because they were caries-free throughout the twenty years and their oral hygiene was immaculate. I don’t recall either of them needing an emergency appointment in all that time. The husband had a few minimal amalgams in his molars, apparently placed while he was doing National Service. 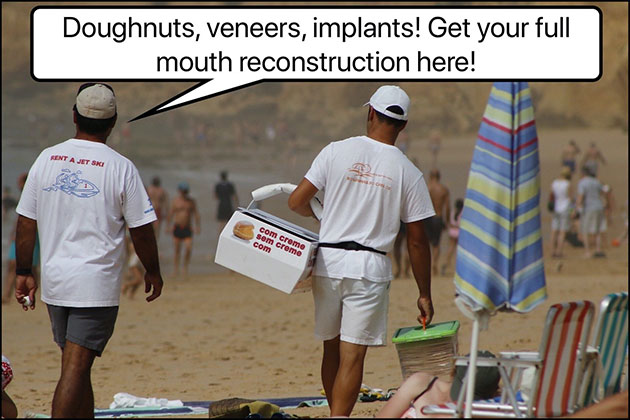 The only thing of note was that both of them had escaped referral to the orthodontist during their youth and both had quite marked crowding. The wife also had a Class II Div 2 incisal relationship and both the 2’s were well out of alignment. Over a couple of years, they both asked if their teeth could be straightened quickly, and without recourse to orthodontics. I basically said “No.” I pointed out that it was possible to carry out ortho without obtrusive appliances, but they refused to consider it.

One day, they turned up to the surgery for examination, looking suntanned and sporting incredibly bright and straight smiles. I hadn’t realised that they had an apartment in Turkey and while on their last trip, they paid a visit to the local dentist. Both of them had all their upper teeth crowned with bonded restorations, from second premolar to second premolar. It looked good and the margins were immaculate – not surprising maybe, since their perio was superb.

I was impressed momentarily, by the standard of work, until I remembered the way the teeth were aligned previously. How, I wondered, did the dentist manage to produce such order to the teeth without doing immensely destructive and damaging preps? And how on Earth did he manage to avoid damaging the pulp? Anyway, they were almost apologetic to me for being ‘disloyal’ and they hoped I’d understand.

I realised three months later, that the Turkish dentist, despite obviously being a craftsman, HADN’T managed to prepare the teeth without doing damage to the pulp. The wife came back with raging toothache in both upper laterals. She had irreversible pulpitis in one of the lateral incisors and a necrotic, infected canal, in the other. I got her out of pain and despatched her to Turkey for an unscheduled trip, where she subsequently received RCT on both the 2’s and post crowns – all done within ten days. You must admit, that speed IS impressive. I would have loved to have taken periapicals of the 2’s just to see what was happening underneath post-treatment, but dental prurience isn’t a sound justification for radiography.

There were a flurry of responses from both dentists and dental punters. The dentists were obviously (and thankfully) against tooth destruction, while there were Twitter users who leapt to the defence of dental tourism.

Those in defence of seeking dental treatment abroad cited the cost of treatment in the UK and the relative unavailability of appointments currently, as reasons why dental tourism appears to be growing in popularity.

But dental tourism isn’t just restricted to the UK. It seems that many people are prepared to travel far and wide in order to get the best bargain dentistry. While Hungary and Turkey are among the most popular European destinations for the British, Costa Rica is apparently a popular destination for North American dental tourists. Goodness Dental, located in Escazú advertises Titanium Dental Implants at just $850.00. According to the New York Times, in The States, the cost for a dental implant to replace a single tooth is estimated to be in the range of $3,000 to $4,500. With those sorts of discounts, it’s hardly surprising that patients will take the plunge into dental tourism.

I had coffee with a close friend and ex-dental colleague the other day. She is originally from Sofia and she was saying that one of her patients flew home to Bulgaria to seek treatment a few months ago. He couldn’t afford implant treatment over here. He had six implants and a full-mouth reconstruction with crowns, for 15,000 Bulgarian Lev – which is just over £7,000. You can see the attraction.

We are quick to tut-tut at dental tourism and I include myself in that. I have seen implants placed abroad which have gone on to develop peri-implantitis. To be fair, I’ve also seen implants develop peri-implantitis that were placed over here. It’s case selection I suppose, but the problem is that if patients go overseas to have these wizard treatments done, it’s the dentist back home who often ends up having to sort the mess out. Quite often, it can be the NHS picking up the tab for corrective treatment. The lady I mentioned above was lucky. Her Turkish dentist fixed the teeth for no charge, but the fact remains that at the end of the day, she once had two perfectly health teeth and now she has porcelain and metal sitting on top of posts with an uncertain prognosis.

We were all taught that post-retained bridge abutments are the work of the Devil, but I’ve seen work provided for dental tourists using posts to support four-unit bridges – replacing two teeth, one of which was a cantilever pontic.

Fair enough, it’s patient choice, but I do wonder whether patients who travel abroad are FULLY informed about treatment options and the potential consequences of treatment. Certainly the lady who had her laterals and everything else crowned WASN’T informed about the possibility of non-vitality of the teeth. I don’t think we go over-the-top when discussing treatment with our patients bearing in mind the awful consequences that may occur if we haven’t dotted the t’s and crossed the i’s. I haven’t ever seen a treatment plan from overboard, so I speak without authority, but from the cases I have seen – bridges being placed on severely periodontally compromised teeth for example – I suspect treatment plans are not as full as they might be – particularly when the patient says “Well the dentist didn’t tell me that!”

From what I have witnessed personally, it appears that the concept of minimally invasive dentistry has not caught on in dental tourism. I mean, why would you fly abroad to be told that the dentist is just going to “Keep a watch on it,” but seriously, crowns being placed on virgin teeth? Someone I follow on Twitter mercifully managed to prevent one of her patients flying to Turkey for potential destructive treatment merely by offering whitening.

Logically, companies that cater for the dental tourist are hardly going to turn down to opportunity to crown everything in sight if the patient requests it. Ah well, ‘you pays your money and you takes your choice,’ I suppose.

But from the arguments proposed in defence of dental tourism, it appeared that the dental folk over here were losing the argument and the concept of tooth destruction and its awful consequences didn’t really register with patients when in pursuit of ‘reasonably-priced’ dental aesthetics.

Nor, it seems, did the concept of cross-infection control register as being important – particularly in relation to COVID-19 precautions.

When you get celebrities like Kirstie Allsopp not only questioning the precautions dentists are taking over here to protect their patients in surgery, but virtually accusing them of using the pandemic as an excuse to provide poor service, it’s no wonder patients aren’t particularly concerned about the precautions being taken in surgeries abroad.

A couple of tweets suggested talking about dental tourism suggested that we are over-the-top in the UK and everything in the dental tourism area was dandy – “Just normal” being one phrase being used. Indeed, one picture showed just standard pre-COVID surgical masks were being used. Nor were safety glasses being worn by the patient either, it has to be said.

An article by Dominic O’Hooley for the IAS Academy included a comparison of international fit test and fallow times. It showed that dental practices in Turkey don’t require masks to be fit tested. Interestingly, neither does Florida in the USA. Although Turkey does require a fallow period post-treatment, it is only 15 minutes.

I have admitted publicly over the past few months, that I have several teeth that I’ve broken cusps on, funnily enough, SINCE retirement. It appears that retirement isn’t as stress-free as I hoped. After looking up some of the prices they charge abroad and the aesthetic results, I’m tempted. If for no other reason than I want to save my own dentist from the stress of working on me. I say ‘my dentist.’ I haven’t broken the news to her that I have adopted her yet.

Either way, I’ll have to save up. I’m a pensioner, you know.