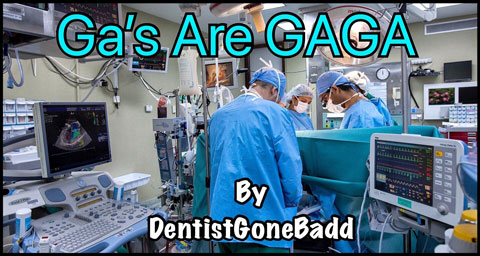 Being such a fan of the airway, I resolved at the beginning of my dental training that I was never going to be a butterfingers and compromise a patient’s right to breathe, by accidentally dropping anything down the throat. I was an even bigger fan of the butterfly sponge in the early days of post-qualification. 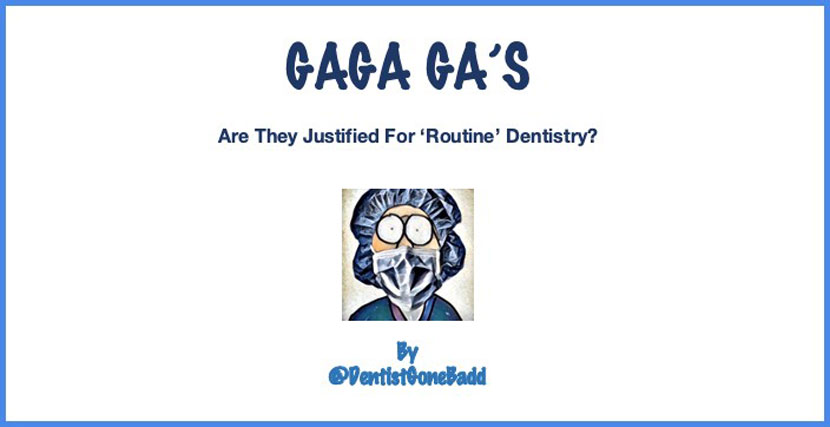 My best friend’s mum and dad had gone out for the evening and David, despite being 14 and one year younger than me, had managed to con an off licence into selling him a bottle of gin.

We went back to his house – a new abode in the middle of a new large development that still hadn’t been fully occupied, and drank through the evening, taking large shots of gin with undiluted orange squash that made the filthy stuff easier to tolerate. It was during Match of the Day with Kenneth Wolstenholme that we decided we needed a breath of fresh air and we wandered off into the night. After about 45 seconds, we realised we had gotten lost and didn’t know where the house was. Because the estate was mostly empty and all the houses looked pretty much the same, we were stumped. There was nobody around to seek guidance from. It never occurred to us in our toxic, alcoholic state, to head towards the only house with lights on AND the front door open.

After about half an hour, we finally found the house and decided to give up on the drinking session. I awoke the next morning to find myself kneeling with my head down the spare toilet (it was a posh new house). I didn’t quite know what I was doing there until my stomach reminded me with paroxysms of projectile vomiting. What made it worse was that as my friend’s dad popped his head around the door to have a good scoff, he let the sound of Junior Choice, with Ed ‘Stewpot’ Steward into the loo, allowing the mocking sound of Charles Penrose’s ‘Laughing Policeman’ to complete my misery. Mercifully, I haven’t heard that song for years, but the muted trumpet intro to the song had the ability to induce waves of nausea in me for many years after the episode.

But that wasn’t the worst bit of the weekend. I was treated to Sunday lunch, which I half-heartedly had a go at, not, funnily enough, being that hungry. I half-heartedly chewed at a tough bit of beef and attempted in my semi-alcoholic stupor, to swallow too early and within a couple of seconds I was full-blown choking. Fortunately, my mate’s dad was the first-aider at his works and managed to dislodge the blockage with back-pummelling and a couple of beefy fingers at the back of the mouth. Afterwards I did think the back-thumping was perhaps a little overexuberant, but perhaps I deserved it after what I did to his spare loo. But the choking episode was an extremely scary experience and it taught me never to drink orange squash without diluting it first.

That choking episode taught me that my most treasured part of my anatomy, apart from the other one, was my trachea – or more specifically, my airway.

Following that particular episode it left me with a lifelong dread of choking and my kids were hauled upside down countless numbers of times during their childhood even if they politely coughed while they were negotiating a mouthful of food.

And of course my fear of airway blockage was made worse with subsequent trips to the dentist. I could tolerate injections, but if the dentist touched my tongue or he shoved a cottonwool roll in, I was done for. I’d be out the chair, clutching at the offending article in order to get it of my mouth with the same speed as that exhibited by a dental nurse trying to get to the last chocolate Hobnob. It was only in my early 20’s that I was able to tolerate treatment without a sweat, when I found a dentist who would treat me with nitrous oxide.

The RA literally changed my life. I was no longer scared of dental treatment and I must have had some sort of semi-religious experience under it, because it was around then I decided I was going to become a dentist.

Being such a fan of the airway, I resolved at the beginning of my dental training that I was never going to be a butterfingers and compromise a patient’s right to breathe, by accidentally dropping anything down the throat. I was an even bigger fan of the butterfly sponge in the early days of post-qualification.

I was obsessive with airway protection throughout my dental years. If fitting crowns, particularly posterior crowns, I would attach floss to the crown with fissure sealant in case I dropped it. The floss at least gave you a sporting chance of retrieving it, was my theory.

If taking posterior teeth out, I’d hook a finger or two behind the tooth I was removing in order to protect the airway. I never actually dropped a tooth, but it was a deep-seated fear that I had right up to the point I retired. I’d even freak out if a patient started retching because a bit of surface anaesthetic had numbed the uvula.

Since that fear of airway compromise filtered down even into everyday ‘safe’ dentistry, you can imagine how I felt if I was anywhere near a general anaesthetic. 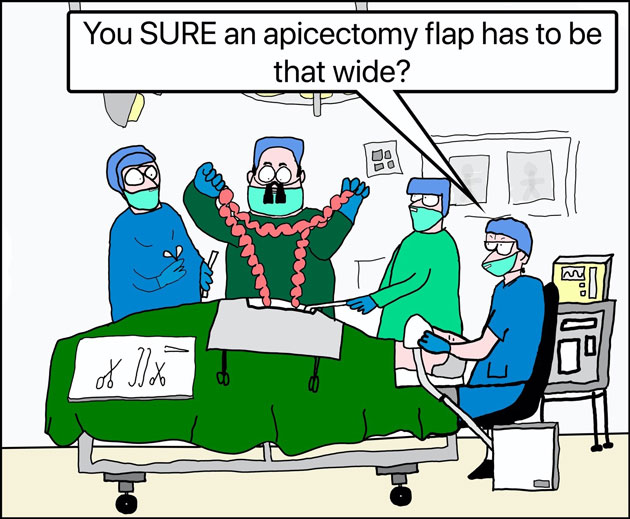 So it’s perhaps surprising that for my elective project in my final year at dental school, I chose to carry out a project closely related to general anaesthesia. I reluctantly admit that as a student I enjoyed the paediatric ‘smash and grab’ GA sessions, removing multiple deciduous teeth in one go, with no patient wriggling to contend with. During one of these sessions, another student and I got to know a senior consultant anaesthetist reasonably well. We mentioned the upcoming elective season to him and he suggested working with him on a project he wanted to get up and running, using a new piece of equipment for measuring oxygen saturation - a pulse oximeter.

So in the month or so before Christmas, working with my GA buddy, we spent the whole time monitoring children during anaesthetics, comparing oxygen saturations in children who had full intubation, to those who didn’t. That study found that there was a slight decrease in saturation during the period that the child was actually being intubated, but overall, there was little difference between the two approaches to general anaesthetics in children, although the intubated had very slightly higher oxygen sats than those who didn’t.

That experience, and witnessing a couple of times when even consultants looked a little flustered at placing tubes, made me very wary of GA’s and I resolved never to use them in practice without an anaesthetist present.

In 1990, the Poswillo Report was published and as far as I was concerned, that vindicated my decision. I’ve written previously that there were a couple of practices I worked in where the principals used GA without a qualified specialist anaesthetist being present. At one practice, the only anaesthetic cart had just nitrous oxide and oxygen on board. I assumed when I first went to the interview for an associateship that the dentist was administering inhalation sedation. It was a few months in that I realised that the odd GA referral I was making to the local hospital was being opened by his practice manager wife and he was doing GA’s without a proper induction agent – pretty much suffocating the patient with 100% nitrous oxide and then ripping the teeth out in seconds before putting them back on to full oxygen. I left soon after that.

Another time at another practice, a nurse ran into my surgery while I was in mid-filling and demanded that there was a crisis in the principal’s room. The ‘crisis’ was that the child patient was turning blue and wriggling under GA and the boss was struggling to keep the child under AND take the tooth out – a lower E.   I was frit to death and shouted in the principal’s face at lunchtime, telling him never to involve me in that appalling nonsense again.

It was because of incidents like that which saw the banning of GA’s in dental practice in 2002. I was amazed that a ban wasn’t actually in force until then. I thought Poswillo had seen the practice off, in 1990, after a number of deaths occurred in dental practices during ‘routine’ extractions under GA.

Last week, GDPUK reported that an average 177 procedures took place in hospitals to remove rotten teeth from children and teenagers, A few weeks ago, a 15 year-old girl tragically died while having what appeared to be simple orthodontic extractions at Great Ormond Street hospital. At the time of writing, an inquest into the tragedy is continuing. The circumstances behind the referral are not clear and no criticism is levelled. I have little doubt that the dental and medical practitioners involved would have made their decisions in the patient’s best interests.

But the latest death illustrates starkly, the inherent dangers associated with GA’s and to me, reinforces the justification for my career-long reluctance to refer for GA extractions. I’d do anything to avoid referring – probably to my mental detriment – struggling with what seemed like armies of fractious children – sometimes under RA, often under LA, in order to avoid a risk to the patient’s life.

I was fortunate at the start of my career to have one to one instruction in GA surgical extractions from a very kind and exceptional oral surgery consultant. I even had the privilege of helping to exposed buried canines and fix power chains to them in order to facilitate ortho, but in my opinion, complex surgery is the only justification for orthodontic extractions and referral for the removal of deciduous teeth under GA, is definitely, the final resort.

After all that, I’m a tad thirsty. I think I’ll get an orange squash.