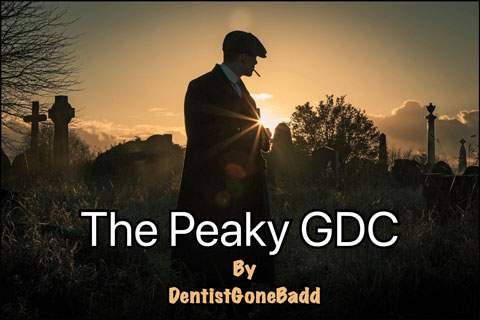 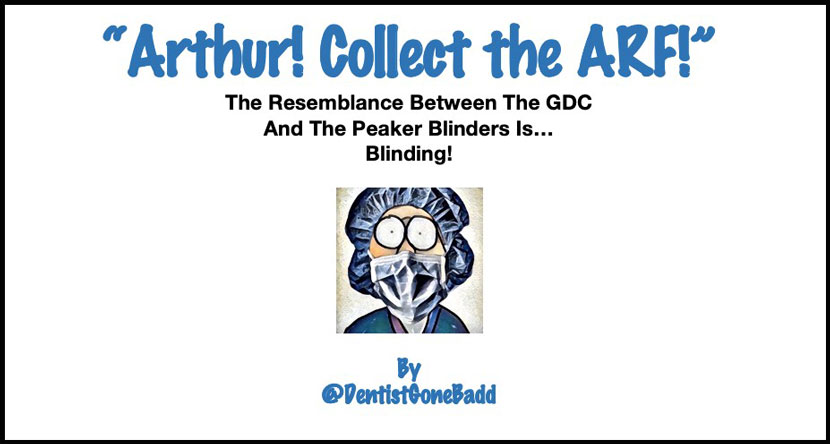 The Resemblance Is Startling
The Peaky GDC

Look at the resemblance between the two organisations closely. The very mention of the names makes the blood run cold, everybody is scared to death of them and they appear to be able to get away with anything they want, with impunity. They are also obsessed with money.

Oooh! And the other thing - they both have offices in Birmingham. Spooky eh?

If you need any more convincing of the resemblance between the notorious Brummagem family and the dental regulator, look at the dental lockdown and the debacle over the pleas from all quarters of the profession to introduce an emergency payment by instalment scheme. The GDC refused point blank to countenance any such scheme.

I could imagine Arthur Shelby threatening a 1920’s shopkeeper with equal menace, demanding he give his monthly protection payment to the Peaky’s immediately, otherwise his supply of sherbet dips would be cut off, as well as his rapidly shrinking undercarriage. The only difference between the Shelby’s and the GDC is that the latter can permanently remove someone’s livelihood, whereas the maniac Peaky Blinders’ brother could permanently remove your marriage prospects.

The GDC said in May that they were worried about ‘uncertainties’ in their income – presumably as a result of the disruption to income affecting everyone – not least, dental registrants, particularly the DCP’s. I assume the GDC was anticipating DCP’s falling off the register in July as a result of an inability to pay. ‘Uncertainties’ was the reason the GDC didn’t want to reduce the ARF.   The steely resolve shown by the GDC in not helping out its registrants, was reminiscent of that shown by The Peaky’s in taking down Billy Kimber’s stranglehold on the betting pitches at Cheltenham racecourse.

In the same way that the Peaky Blinders would never hold a public meeting to discuss ‘family’ matters related to their nefarious business practices, the GDC is also fiercely protective of the decisions it makes.

A Freedom of Information request from Lori MacGregor, a non-registrant who has been championing the plight of DCP’s and fighting for the survival of dental practice, asked the GDC for the costings involved in introducing a PBI scheme. The GDC shut down, pretty much like Thomas Shelby clamming up in refusing to talk emotionally about his World War I experiences.

The GDC refused to release the costing information from the closed meeting at which the emergency PBI scheme was discussed, saying “Council and GDC staff need a safe space in which to provide advice or information to ensure free and frank discussion. Senior staff would be more likely be reluctant to provide advice or information on difficult areas of business in the future, or consider more radical options, knowing that it may be released into the public domain.”

It just begs the question: What on Earth are the GDC discussing that they need to ensure staff need a ‘safe space’ in which to talk? Can you imagine Polly Gray taking that? It’d be “TALK, or else.”

The GDC also said “Releasing the costing information on its own would be likely to result in public debate with the other considerations and place undue emphasis on costs in future considerations about a PBI scheme.” “RESULT IN PUBLIC DEBATE?”

That says to me, that the GDC is again, pretty more concerned and protective about its enormous rainy day reserves rather than doing the decent thing – a bit like the Shelby’s defending their turf against Alfie Solomons. And if they don’t want to stifle public debate, why not release all the other considerations, if they’re all reasonable and above reproach?

In the same way that the Shelby’s without question had to employ a dodgy accountant, the GDC’s manipulation of data has to be questioned.

The GDC received much criticism on its decision not to reduce the ARF or introduce the PBI scheme. Many expected a sharp reduction in the number of DCP’s re-registering on July 31st as a result of the difficulties in making the ARF payment.

In 2019, there was a 5.9% reduction in the number of registrants renewing registration in July. This year, 6.6% of registrants failed to re-register. The GDC prefaced the figures by saying that the 4,562 drop off was 6.6% of those on the register on 31 July, “Compared with an average of 6.5% over the preceding four years.”

I believe the GDC deliberately tried to obfuscate the figures, by introducing averages. Last year, the drop off was 5.9%. This year it was 6.6%. Why bring in averages except in an attempt to confuse the position? See the table (my pink highlighter) and judge for yourself. Please don’t hurt me, Mr Shelby! 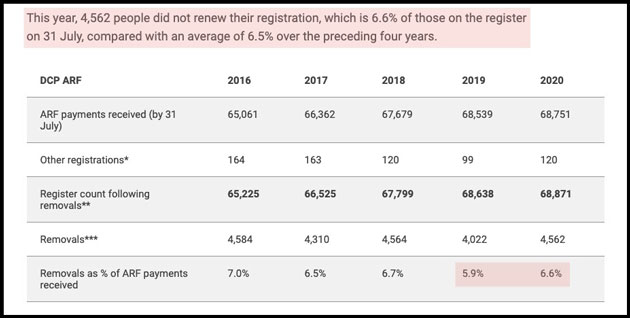 There was a lot of criticism of the GDC in June  when it was reported  in Private Eye that the GDC topped up government furlough payments to furloughed regulatory and administrative  staff.

To add insult to injury, last week, in answer to an FOI request from JFH Law, the GDC revealed that (despite there being no significant drop in income due to the ARF staying the same), the GDC had claimed £101,491.64 from HMRC.

GDC.  You would have made Tommy, Arthur and Polly, very, very proud.