When did you last have it? _ Leadership in dentistry.

Take Me To Your Leader
(If You Can Find Her)

I was never a leader.

As a practice owner I always led from the little room at the back of the building where we kept the compressor, never from the front.

The only time I ever really felt I stepped up to the plate was when we had a case of bullying in the practice and I stamped on it - the bullying, not the plate. The CQC would surely have said something about having plates in the surgery. One of my associates had reduced a trainee nurse to tears one day and I just flipped. I am normally a mild-mannered individual, but I have a fearsome temper when my buttons are really pressed and bullying really activates the klaxon.

The result of my outburst resulted in the associate quitting, which wasn’t the outcome I desired particularly, but as it happened, a great and welcome calm descended on the practice thereafter and it was the best hissy fit I had ever theatrically thrown.

In fairness to me, I would step in to help dentists dealing with difficult patients and would be reasonably firm in those situations. But as far as business was concerned, I was hopeless, leaving most of the business side of things to my trusty practice manager. When she told me that we were going to go under if we stayed exclusively in the NHS, my PM guided me through the process to get a few patients signed up to a private capitation scheme. I say guided - it was more dragging me kicking and screaming.

Even though I was an appalling leader of a small rural dental practice, I really feel I could have done tons better than the current Chief Dental Officer for England, Liz Hurley…sorry, SARA Hurley. It was an easy mistake to make. Most dentists on Twitter seemed to be completely unaware that Dr Hurley was the England CDO, since many had not seen hide nor hair of her since she took up the post in 2015. That’s FIVE years. Few clinicians would have picked her out as the CDO in a police line-up even if their lives depended on it.

To recap what happened last week, dentists who work in the NHS were driven to the precipice of a metaphorical cliff having being blinded by a defective and unstoppable, metaphorical windscreen washer. To be accurate, there was no driver at the wheel although instructions were being shouted by backseat drivers who had already neatly parallel parked their vehicles well away from danger. No, I didn’t follow it either, but hold tight.

In a week when the UK was put into near total lockdown and ‘self-isolation’ became the new worldwide buzzword, the dental profession in England was imploring its leadership for some definitive guidance on exactly how it should be treating patients in order to reduce the risk of spreading or catching COVID-19.

Yes, we had the advice not to treat patients who were confirmed as being infected with coronavirus and were told to clean thoroughly after our patients (as we normally do), but there was no definitive guidance on the use of aerosols in practice.

In desperation, many turned to the General Dental Council for guidance. The GDC’s advice was wishy-washy at best. Stefan Czerniawski, a member of the Executive Team said: ‘The GDC doesn’t set detailed clinical standards because that is not what we are here for. The health authorities of the four nations are the authoritative source of such guidance and, in the context of COVID-19, we have done what we can to help ensure that their guidance is readily available.”

Two things. Firstly, I hadn’t realised that the GDC didn’t set clinical standards since on its website it says: “We set professional standards for the dental team.” I thought that was exactly what the GDC was there for. If not, how come people get taken to the GDC because their root-fillings aren’t up to scratch if they don’t set the standards to compare with? Secondly, doing what “we can to help ensure that their guidance is readily available” clearly wasn’t good enough midweek since Dr Hurley and the England Nash were maintaining radio silence, which I will come back to shortly.

The other thing that struck me about the GDC statement early in the week was that it was postponing its public council meeting and was closing its offices. It was like a Western. “You cover us Billy, we’ll save ourselves by heading for the hills.” But people who are due to face FtP committees needn’t worry. One unfortunate chap was sent a letter to say that as soon as it was safe for the committee to sit next to each other on the bench, he would be called before it.

On Thursday there was much confusion caused when ‘guidance’ appeared first on dentistry.co.uk and nowhere else, particularly official NHS websites. The guidance was pretty ineffective and in desperation some practitioners decided to follow the advice given by the Welsh and Scottish Chief Dental Officers and pretty much downed their wet and windy dental tools altogether.

Eventually, on Friday, guidance was issued by the CDO on England NHS though if you tried to access this site for much of the day, a message declared the page was unobtainable, much like Sara Hurley herself.

That was clear-ish advice, IF you could read it. The webpage on which it appeared was out of action much of the afternoon. 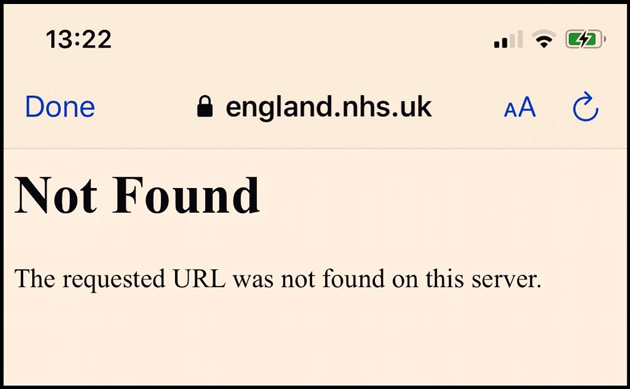 This of course fell short of putting a ban on creating aerosols and most dentists appeared to have come to the conclusion anyway that they ought to dry out, after seeing the Welsh and Scottish advice.   My feeling, from the point I read dental writer Michael Watson’s tweet that Sara Hurley is merely a civil servant and that money was the issue, was that the bottom line was probably that NHS England doesn’t want to relinquish clawback. An out and out ban on aerosols would mean the government was preventing dentists from hitting their March 31st targets by putting a stop on the completion of Band 2 and Band 3 treatments.

In effect, NHS England appeared to be leading by pulling the strings on the CDO. But you all suspected that anyway.

While Scotland and Northern Ireland’s dentists have financial packages in the pipeline, the BDA is continuing talks with NHS England ‘to identify what help might be provided for dentists and their teams.’

“The challenge facing every dentist, whether providing NHS or private care, is keeping this service afloat. We needed a safety net, but to date we have been offered little more than warm words.”

Talking of radio silence, also on Friday, Radio 4’s consumer programme You and Yours invited Sara Hurley on to debate the coronavirus in relation to dentistry in England. The CDO declined the invitation and NHS England, which promised to give the programme a statement, didn’t deliver. It was left to Paul Woodhouse, a dentist practising near Stockton-on-Tees and Eddie Crouch, Vice-Chair of the BDA’s executive committee to succinctly outline the problem – namely that Northern Ireland, Wales and Scotland all appear to have financial safety packages secured, but England doesn’t. Eddie Crouch pointed out that although the guidance from NHS England was delivered that morning, in England-based practices received no reassurances with regard to financial support unlike the other three quarters of the UK.

Although leadership was lacking in…the leadership, dentists were leading their teams on the ground. By the time the guidelines were published in England, practitioners had already pretty much decided how they were going to proceed to protect both patients and staff. It didn’t reflect well on NHS England and Sara Hurley that potentially, both staff and patients were put at risk by the prolonged dithering. The powers that be cannot have been unaware of the anxiety experienced by dentists and dental staff and the delay was, in my opinion, nothing less than cynical.

Also cynical was the response of one large corporate which led its workforce by issuing a statement to its staff telling them to refrain from putting their views on coronavirus on social media.

I felt that leading the way in fairness was the professional indemnity organisations. Led by the DDU, they started to reduce subscriptions in proportion to the projected reduced hours of their members. And they didn’t appear to need prompting.

Having had the time to watch the procrastination from the NHS dental leadership over the week, I watched the realisation slowly dawn on members of the profession that NHS dentistry is again at the bottom of the pile, and as usual, the reason was an obvious reluctance by the government to fund it, even in crisis.

Will the dentists in England get a financial reassurance to secure their future this week? I don’t know. Don’t hold your breath…NO! DO HOLD YOUR BREATH! THAT BLOKE JUST COUGHED!