I was a Scaredy-Cat 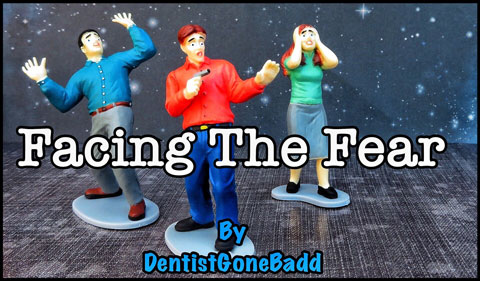 I was a Scaredy-Cat (Facing fears in Dental Practice

I don’t know whether it’s just that I have too much retirement time on my hands or the sudden realisation that I’m knocking on a bit has prompted it, but I have started to seriously compile possible candidates for my funeral songs.  (Don’t deny it, you have done this too).

A big fear I have is that if I haven’t put my funeral song choices on a memory stick, or at least written them down for someone close to act on, someone will impose some dirge like The Lord Is My Shepherd, or worse, some relatively unknown hymn that will embarrass my relatives and anyone within earshot when they try and sing it. Suffice to say, it will not be a religious ceremony.

The bit where the pallbearers march me into the crematorium will be accompanied by either Apache Indian’s ‘Boom Shack-A-Lak’ or Hue and Cry’s ‘Labour Of Love.’  The bizarre bit where the curtains close  and the casket is shuffled off into the business part of the building will be accompanied to something from either Kate Bush or Aretha Franklin – currently, I’m torn. 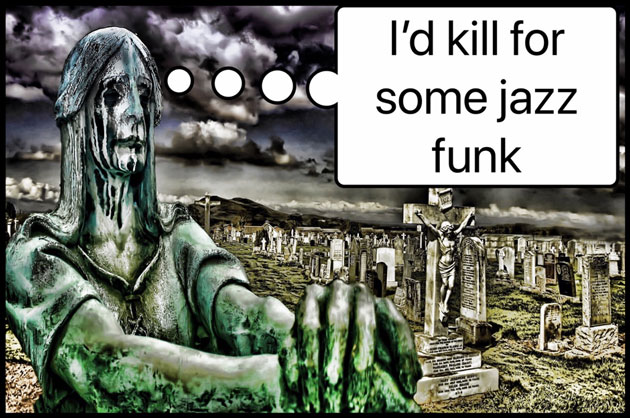 Just over a year ago I wrote on Twitter: “They say you should do something every day that scares you. I do. Dentistry,”

I was quite pleased with that Tweet. Although not many followers were that impressed, one follower did adopt the words of my Tweet as his bio strapline. I couldn’t protest that he’d nicked my ‘creation’ since I’d pretty much lifted the idea from Baz Luhrmann’s "Everybody's Free (To Wear Sunscreen),” though Mr Luhrmann actually pinched the quote “Do one thing every day that scares you” from an essay written by Mary Schmich, a columnist for the Chicago Tribune, in 1997.

Anyway, Baz and Mary Schmich’s words will be sung/spoken during the middle bit of my funeral ceremony where everyone is expected to reflect on my life, despite the fact that the only time I meet most of my relatives is at family funerals.

While I endorse the wisdom of almost everything in ‘Everybody’s Free,’ the only bit I don’t go with is the bit about doing something every day that scares me. Why would anybody willingly do that, save fighter pilots, fire fighters, lifeboatmen and head dental nurses rationing surgical masks to angry colleagues?

Having said that, I HAVE done a couple of scary things this week, and both of them were within minutes of each other at the unlikeliest of venues, the Co-op supermarket.

Firstly, there was a bloke at the checkout coughing his lungs up while he was putting through a couple of bottles of Domestos, half-a-dozen packets of anti-bacterial disinfectant wipes, four cans of Dettol Aerosol Disinfectant and a packet of Strepsils. Looking closely at him (from a safe distance), it seemed to me that the horse had long bolted and had finally ended up in France as la viande de cheval.

Anyway, I stood behind him and loaded my stuff on to the conveyer belt, politely refraining from pulling the hood up on my trendy Peter Storm anorak for protection and timing my inhalations and exhalations with his breathing exertions to minimise my viral intake. The lady behind me looked at him, looked at his purchases and turned away and went to a much larger queue at the only other checkout point open in the store. I was quite proud of myself. Although realistically I thought it was unlikely the man had COVID-19, as an insulin-controlled diabetic, I impressed myself that I took the risk, rather cause an awkward scene! I was always scared of creating a scene. 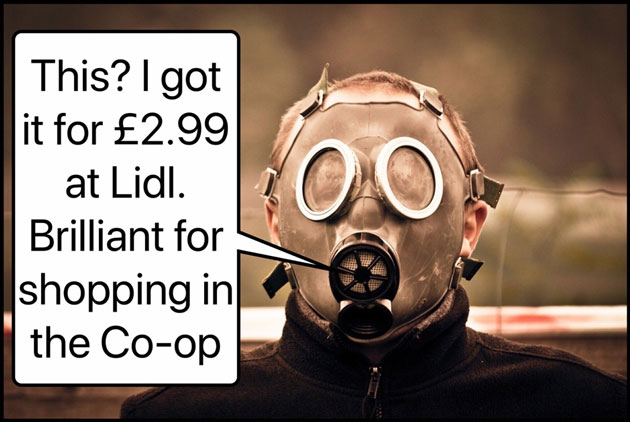 Having paid for my purchases (a couple of bottles of Domestos, half-a-dozen packets of anti-bacterial disinfectant wipes, four cans of Dettol Aerosol Disinfectant and a packet of Strepsils), I walked back to the car park.

As I neared my car, in the distance, I could see a familiar face and I realised it was one of my ex-patients, a lady who I had treated for 20+ years. As I approached, she reached into her bag and put on a pair of dark glasses. For a second I wondered if she was trying to disguise herself in an effort to avoid talking to me, but I broke my usual rule when I see patients out and about, and instead of running and hiding, I approached her and said “hello.”

She seemed to be pleased to see me and told me she was also now retired from her work as a medical practice nurse where she specialised in respiratory medicine. Every time I saw her in my surgery, she’d advise me to do something about my persistent cough and almost like a Pavlovian response, as soon as she spoke, I started coughing. “Still got the cough I see!”

Although not exciting, it was a pleasant exchange and I was relieved to see she wasn’t hiding any resentment at my care over the years. My default position is to assume that all my work on all my patients has at some point been undermined by their new dentist and it was nice to see that her body language was relaxed and friendly and didn’t indicate she wanted to bludgeon me unconscious with a bottle of Domestos. Normally, the idea of going up to an old patient to speak to them would have scared me. I think Baz would have been proud.

Now it’s probably no surprise to hear that there were LOADS of things that scared me in practice.

Even the most mundane of things would scare me. Giving locals for example, would frit me to death. I have written before that when patients jumped during treatment, I’d have to be almost scraped off the ceiling. I was always tense and anticipating patients jumping during the delivery of locals, particularly the ones delivered just under the nose. Once I had to wear a 24-hour ambulatory ECG machine to check out arrythmias I was experiencing. The machine picked up my heart-rate regularly went up to around 140bpm when I was delivering locals, particularly inferior alveolar blocks.

In my defence, this probably issued from two experiences I had when I first qualified. In one case I was treating a young lad of around 15 years old who had never had treatment before. I had patiently explained that I would be giving him a local and warned him to keep still as I approached. I was nearly in the mouth when he turned his head sharply towards me, shouting “What the f**** is that?” The end of the needle went into the space between the arm and the glasses part of his protective specs. My heart rate must have exceeded 140bpm. I can only guess at his heart-rate as he ripped his bib off and flew out the surgery into the waiting room, shouting “I’m gooin. He’s f*****g mad!”

For a couple of years post-qualification, I was lucky enough to work in a practice where I was treated for many years (usually under nitrous oxide). The practice was renowned in the city for treating anxious patients and the two superb practitioners taught me how to deliver pretty near painless injections. One tip they gave me was to use short, narrow gauge needles for ID blocks. This of course meant that pretty much the whole of the needle had to be inserted in order to get to the injection site.

One day I was treating a particularly anxious patient whose pain threshold was somewhere below his knees. I’d got the needle almost into the ideal site when he jumped and sat bolt upright. The violence of his action dislodged the needle from his tissues and when I looked, the needle had almost bent back double on itself and I was lucky it didn’t break off. Thank you Septodont. 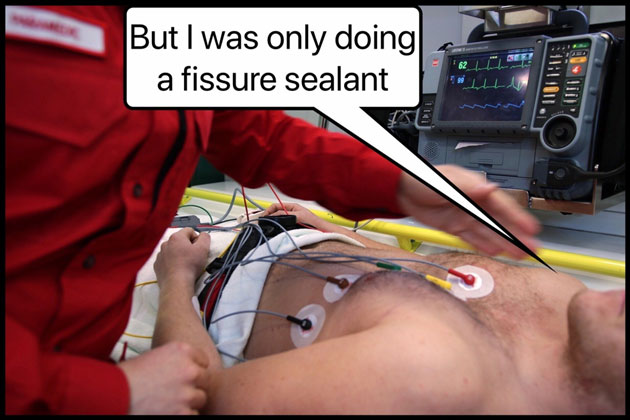 I can honestly say that although the teaching of oral surgery at my dental school was pretty good, the practical experience we got in surgical extractions was not enough to get me over the jitters, particularly with regard to third molar impactions.

One of the first third molars I removed was a conical, mesially impacted beast that needed only a little bone removal with a little coronal sectioning. The tooth came out reasonably easily once the impaction was eased, but when it did come, it had a massively long and stringy bit of tissue attached to the apex. My heart sank when I saw the tissue, my first thought being that I had torn the ID nerve out of the patient’s jaw and that my pre-op x-ray had lied. I got one of the nurses to fetch a senior colleague. He was quite laid back as he examined the stringy tissue and poked it with a probe – well he could afford to be – after all it wasn’t him who had just extracted the inferior alveolar nerve. He declared it to be a “bit of gum,” adding “don’t stress about it.” I sewed the lady up and reviewed a week later at the suture removal (I always preferred silk). She had no problems post-operatively. Turns out, it was a bit of gum.

That experience taught me that I didn’t really have a clue, or the confidence to do surgicals, so I rang up the local oral surgery consultant, pleaded with him to teach me oral surgery and I spent a day a week in theatre with him for 12 months. I gained a lot more confidence, but I was always wary of unexpected string.

Another thing that worried me in practice was taking impressions. I know where this came from. The day after I got drunk for the first time at a friend’s house (I was 15 and the offending substance was gin), I nearly choked on a piece of pork at a friend’s house. I think I was still drunk (my friend’s parents also thought I was still drunk) and it was a few seconds before they realised that I wasn’t breathing. Mercifully there was an end of pork to grab and my friend’s dad managed to grab it and yanked it out. This was the pre-Heimlich days and if he hadn’t carried out the finger grab, I think I’d have been a goner.

Anyway, that made me very wary about choking hazards and I was unbearably fussy about the consistency of alginates and the loading of the trays when I entered dental school. I must have driven nurses to distraction.

My phobia of choking patients to death wasn’t alleviated by one day placing a zinc-oxide dressing in a tooth. I’ve got an idea it was one of those ready-mixed things that I always found awkward to use. As I sat the lady up, she started to grab at her throat and indicated to me to pat her back. I did, expecting to have to do abdominal thrusts when she stopped being agitated and said: “Thank you. That had a horrible taste.” Apparently, a bit of saliva went down the right way. The dressing was intact.

The other thing I was frightened of was treating patients. Period.

Every day, I did something that scared me. Thirty one years. Pity I forgot about the sunscreen.