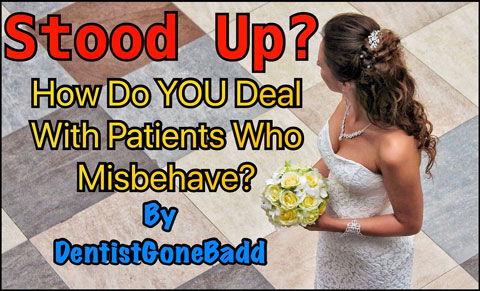 Ain’t Misbehavin’ - How DO You Deal With Disruptive Patients?

How DO You Deal With Disruptive Patients?

The only time I used to feel at one with other members of the UK’s dental profession, was at half-term.

It wasn’t that I was suddenly empathising with my colleagues up and down the country in some supportive ethereal collective ‘oneness,’ more that I realised that everyone else was suffering as much as I was from endless queues of patients and stroppy kids, but hopefully more so. I drew comfort from that. 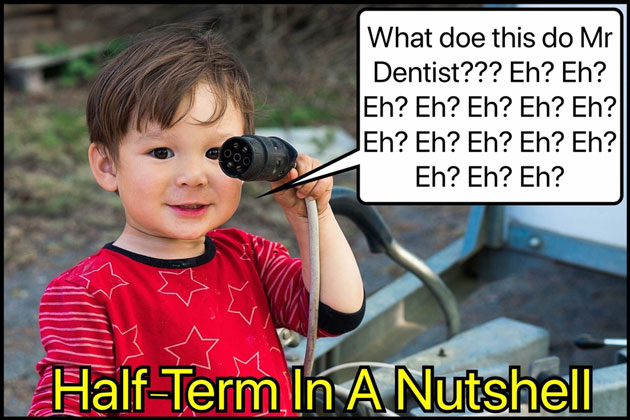 The flashbacks to half-terms reared their head the other day when NatashaClaySmasher (@Gnasherwell), a dentist I follow on Twitter said on the first day of half-term:

“Just had an hour’s worth of patients not turn up (despite text reminders). We really need to bring back charging NHS patients for not keeping their appointments.”

This Tweet brought a sizeable response from empathetic NHS dental professionals and prompted a lengthy debate. During half-term week, many expressed dissatisfaction with the health service’s current system which forbids the imposition of fines on patients who fail appointments, despite the fact that FTA/DNA’s cause practices to lose money, not the NHS. Not unsurprisingly, most agreed that money gushing down the practice plughole, was a bad thing and needed to be stopped, even if it does contravene HTM 01-05 guidelines on plugs in sinks.

I remember the good old days when you COULD dish out modest discretionary ‘fines’ on patients (mainly the ones you didn’t like) and although a charge didn’t cover the cost of the money you lost on the appointment, it gave you a warm feeling inside – a feeling that justice had been done and you were justifiably collecting some of the court costs.

There were some dental professionals who sympathised with the odd FTA-er, but they were outnumbered by the well-worn general practitioners who had heard it all before.

Newly retired ceramics dental laboratory owner Terry Cain (@cain_terry), pragmatic as always, was less sympathetic towards the non-attenders. He said: “I bet it isn’t forgetfulness. If the same people had booked the cinema or a holiday, they would turn up for that. If it’s not possible to charge, then if patients don’t turn up without having informed the practice, then refuse to make another appointment.”

It was pointed out by yours truly that the local NHS Area Teams would have something to say about that, though many practices appear to practice a ‘three strikes and you’re out’ policy. In my opinion, it should be 15 years of penal servitude in the colonies. 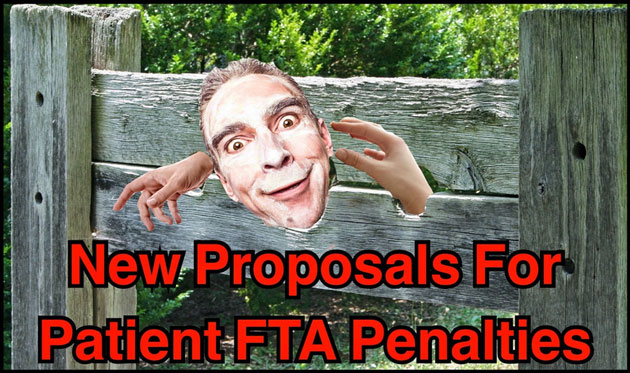 The chasing of near-impossible UDA targets in order to stand still financially is a real burden for many practitioners and the fact that they lose out when patients simply couldn’t be bothered, is like trying to make a living out of dentistry with your hands handcuffed behind your back and having to turn away enthusiastic and willing patients with agreed and signed treatment plans in their back pockets.

But what CAN you do to encourage patients to play the game with regard to their dental attendance and keep within the NHS rules?

Well, this may be harsh, but it appears to me that there’s nothing you can do, so just suck it up.

You CAN try and reason with them, but my experience of doing that suggests that if you DO attempt quietly presenting a polite well thought-out argument for why they should turn up to appointment without any sort of consequence attached if they don’t play the game, you are seen as a ‘soft touch.’ Perhaps the next contract will bring back the ability to charge patients for failing as well as more reasonable treatment item fees and the removal of UDA’s and targets? Yes, exactly. Dream on!

But as we all know, patients who don’t turn up for appointments aren’t the only ones who misbehave and need putting on the right track – preferably lying prone and tied to the track, while a devilishly evil villain dressed in a black cloak twiddling his dastardly handlebar moustache laughs maniacally as the steam train to Unviability Parkway bears down at breakneck speed. 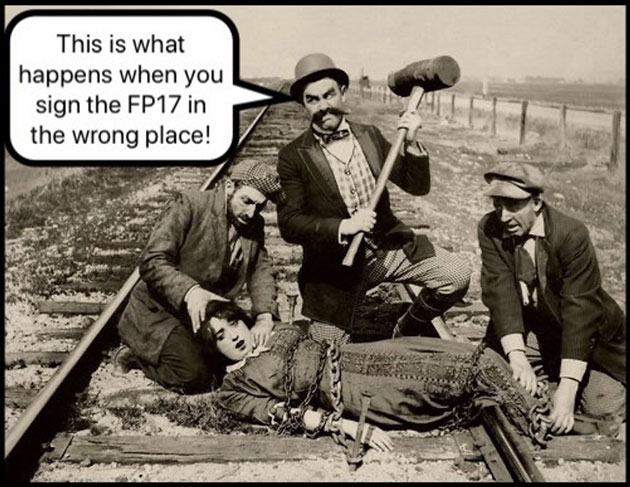 Patients who turn up late can be as disruptive as the non-attenders. If they turn up way too late and you don’t have the time to see them, they may as well have stayed away completely. The problem with this sort of patient is they can turn it back on you if you have ever kept them waiting more than a couple minutes, 19 years ago.

I had a big beefy chap once (I think he was either a builder or wrestled grizzly bears for a living), who I kept waiting for about ten minutes or so for an exam, early in the morning. When he was shown in, he was absolutely fuming that I’d had the gall to keep him waiting, despite the fact that he’d actually turned up five minutes late anyway and the effect was that I’d only kept him waiting five minutes.

He shouted in my face for a couple of minutes and kept saying “9.15 MEANS 9.15” in much the same forlorn way that poor Theresa May believed and repeated that “Brexit MEANS Brexit.”

When he eventually calmed down, I carried out his treatment. It was only later when I went back to his card to write the notes about the confrontation up, that I noticed a couple of years earlier, the same man had turned up to an extraction two hours late…but I STILL took the tooth out without doing an Alex Ferguson-style hairdryer on him.

I had one woman once, who turned up 50 minutes late with her kids and I just couldn’t fit them in. She and her son always needed a scaling and I had made the appointments accordingly. The next time she came, the lovely lady popped her head around the surgery door while I was treating a patient and said: “How you doing? I do hope for your sake that you’re running on time!”

Another lady who was similarly, spectacularly late, had to be turned away one day. The next time she turned up she lay down and said ominously: “What goes around, comes around.” She didn’t say any more, but every appointment after that, I was expecting trouble of one form or another.

I personally never found the right way to approach the problem of persistent latecomers and I think this is best left to dental receptionists to handle. I don’t know whether they are actually taught it or whether they are actually born with it, but many dental receptionists I’ve worked with have the ability to deliver a withering look that if unleashed at full power, would turn wrongdoers into a pillar of salt. There was one practice I worked at where patients only ever turned up late on one occasion only.

My own proposition for latecomers is a bit of a blunderbuss. I always thought that ritualistically burning the lifelike effigies of such patients outside the practice front door might serve as a deterrent to others. Apparently, there were Health and Safety concerns.

Patients who turn up for appointments but are just plain stroppy and make you uncomfortable are another manifestation of misbehaviour. I had a patient once – an ex-army Major, who would ring up the old Family Practitioner’s Committee offices every time he couldn’t get an appointment of his chosen time and date. Every time. I had only just taken over the practice few weeks when I first came across him. He insisted that we open up on a Saturday morning for him, just to do a crown prep. He wasn’t prepared to wait a couple of weeks for an available weekday slot. The FPC rang me up and told me to arrange it or he’d be ‘big trouble.’ As a new practice owner, I was too worried about the consequences if I didn’t take their advice, so I go a locum nurse in to cover for me. He was apparently satisfied by the service he received and as a result, I was lumbered with that patient for nearly 20 years.

This chap would also ring up ten minutes or so before his appointment to see if I was running on time. One day he added for the benefit of the receptionist: “Because I don’t want to sit in that nasty little waiting room of yours for any length of time.” That was the last straw. I decided at that time that there was a breakdown in the dentist-patient relationship and I sent him a letter stating such, copying in the local Health Authority. They were thoroughly cheesed off with him too and didn’t protest.

I have to admit that although I’ve had to deal with quite a few aggressive elderly ladies who I really felt could become violent if I DID lie them too flat, I’ve never really encountered a potentially physically threatening situation. I have to also confess that I never attended a course on handling threatening situations. I always deeply felt that the best way to deal with a very stroppy patient was to stay stock still. I deeply believe that like the Tyrannosaurus rex, patients can only see you if you move or try and charge more than was on the treatment plan. 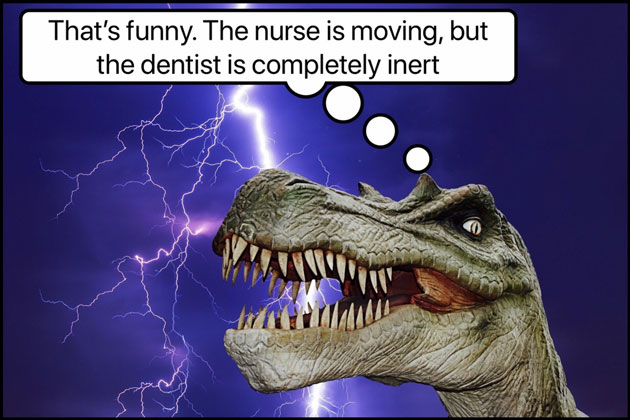 The other misbehaviour that is difficult to deal with is non-payment. Do you send the patient to county court and bear the cost if you lose, or just give up?  When I first qualified, I worked as an associate under a contract where I was responsible for my own patient debts. After several letter, and despite death stares from the receptionist, a gentleman refused to pay for his denture (this was about 1988). I rang up his home and his wife answered.  After agreeing that my work on her husband had ‘changed his life’ and he was a ‘completely different man,’  she still confirmed he wouldn’t be paying. “Well,’ she said.  “It’s a choice between paying you or the leccy people this month.  It’s becoming a bit parky and I don’t wanna be cold, so you’ll have to whistle for it.”

I wonder if the T. rex could still see you if you were gently sobbing?