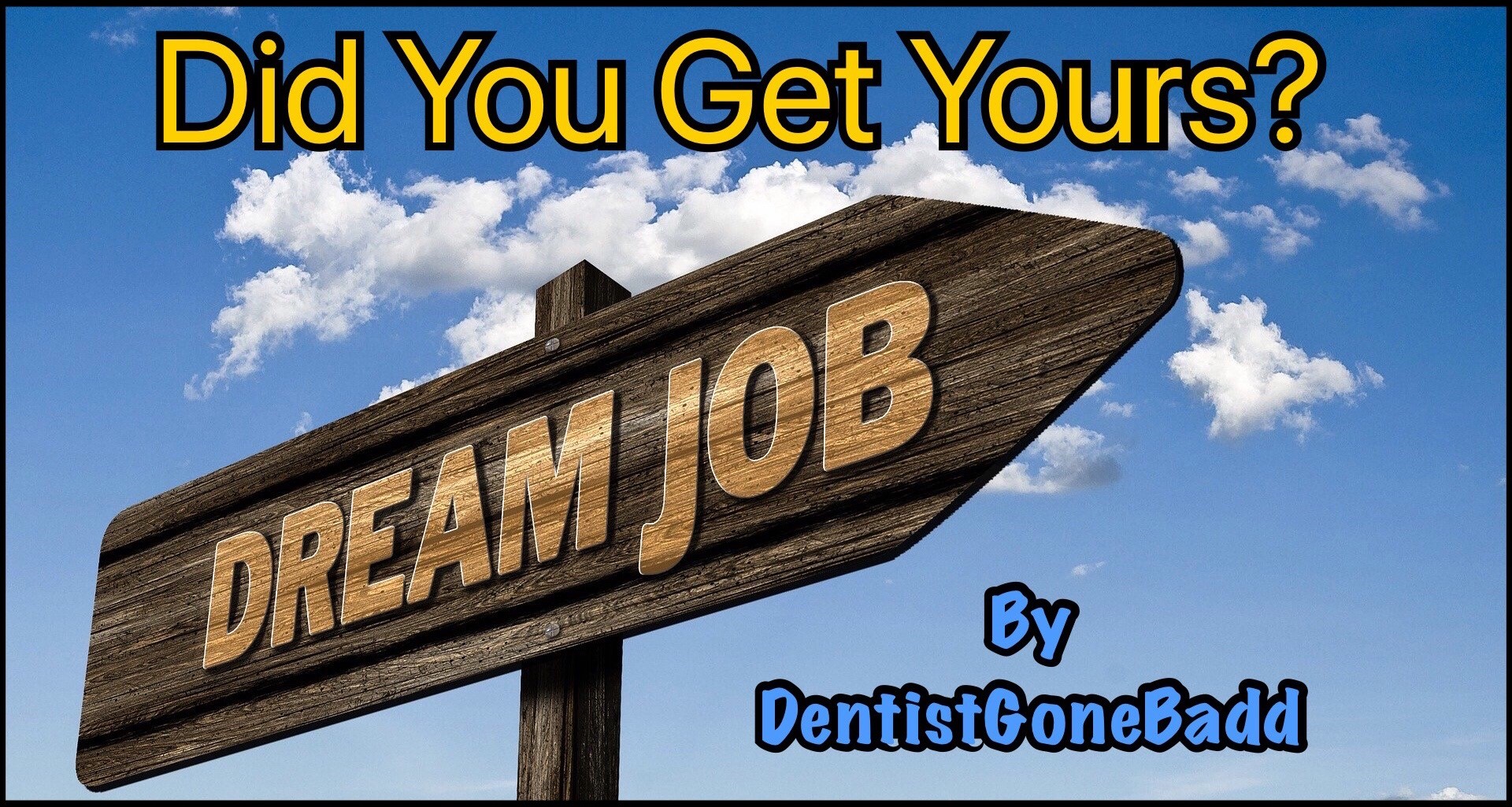 Abandoned Dreams - Which Career Dreams Did YOU Abandon?

Which Career Dreams Did YOU Abandon?

Anyone who has bothered reading my ramblings previously will know that I am obsessed with Donald J. Trump. My retirement from dentistry has facilitated my indulgence in learning everything about this incredibly interesting, yet revolting specimen – allowing me loads of time on YouTube to wade through Trump stuff put out by CNN, MSNBC and even the deranged Fox News.

My excitement was uncontainable a few weeks ago during the Congressional impeachment hearings (I watched every single minute) and now I’m beside myself with quivering anticipation, counting down the hours and seconds till I can watch his Senate impeachment trial live on C-Span.

When the awful Mitch McConnell and revoltingly obsequious Lindsey Graham finally smooth the path to an unfair Senate Trump dismissal, how will the 45th President of the United States actually feel? Well we can guess that he’ll immediately find the nearest helicopter and under the whirl of the rotating blades, proclaim that he’s been ‘exonerated,’ despite the growing daily evidence that he’s as guilty as hell – a fact the reptilian Republicans choose to turn a blind eye to lest they lose their marginal seats at the November elections.

But how must it feel to be a man who will go down in history as only the third President to have the term ‘Impeached’ forever attached to his name, no matter how many witches he blames for his predicament? 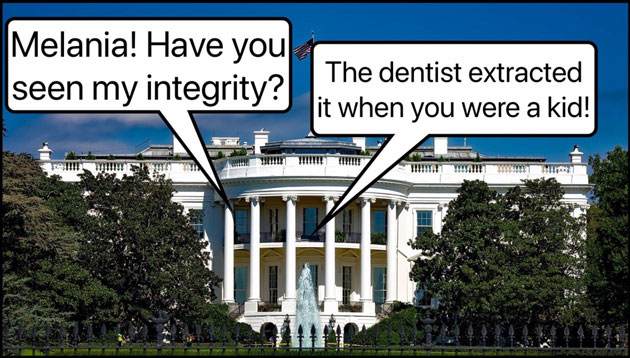 Any normal human being would be thoroughly ashamed I would have thought, but I doubt Trump will be.  He’ll convince himself he is universally loved and that he is God’s gift to mankind.  But it made me wonder how I would have felt if I’d ever ended up in the dental equivalent to impeachment – a Fitness To Practice hearing at the General Dental Council.

Mercifully I didn’t end up in a hearing during my career, but if I had have done, I couldn’t have lived with the shame – dismissal or no dismissal. Trump will doubtless call dismissal of the impeachment charges  a ‘victory’ despite the fact we all know his pants spontaneously ignite as soon as he opens his mouth.

I try really hard to find SOMETHING redeeming  in Trump, even at a  nano-level.  All I would like to see is some vague indication that he has a grain of humanity that is even remotely altruistic and opposes my notion that he is driven purely to destroy anything and everything that Barack Obama put into place.

Suffice to say, I can find nothing.  Nor can I find any achievements that he could possibly look back on and held as his legacy, other than a ‘love letter’ from Kim Jong-un.

But having said that, can I look back on my career and point to MY legacy, or is my career strewn with broken self-promises and unfulfilled ambition? Did I REALLY abandon my dental dreams?

This morning, I was looking through the dental news and one particular story caught my eye, and resonated with the clang of a probe crashing into the metallic moon that some conspiracy theorists reckon is hollow.  For Hamilton in South Lanarkshire is to have its own dental bus.  In my day we used to call such a vehicle a ‘mobile surgery,’ but I read this story and it took me back to the time when I REALLY, desperately wanted to run my own mobile surgery.

I don’t know why I fancied running a mobile, but I did.  I think it must have harped back my childhood when I had lovely caravan holidays on the Somerset coast, when everything was fun and the Dental Law Partnership was long yet to evolve from a primordial slime. I was actually running my own practice when I put in a business proposal to the Primary Care Trust.  To my recall, it didn’t get very far because there was a change of management at the PCT at the time, and the new manager of dental services and dental practice advisor both thought I was a lunatic.

But I could just see myself and a nurse at my side, careering around the Cotswolds, blasting out ‘Our Tunes’  on the Simon Bates show, only punctuated by the muffled cries from the receptionist who was being thrown from side to side in the back.  It could have been perfect, delivering NHS treatment to those Cotswold folk who could ill-afford the astronomical private dental costs that abounded in rural Oxfordshire at that time.

Most of all, I’d have embraced the freedom afforded by being in one or two different locations every working day.  I could also see the advantages in reducing clinical waste service costs, being able to shed the contents of the sweet-jar spittoon collector directly on the A40 just outside Witney as we passed between Oxford and Burford.  The young David Cameron had a lucky escape.

Another advantage of a mobile, as I saw it, was that I could justify the occasional extra day off for things like services and MOT’s, or having the dust caps changed on the tyre-valves.  Of course, the main attraction was if the CQC ever threatened to call, you could just put your foot down. Shattered dreams. 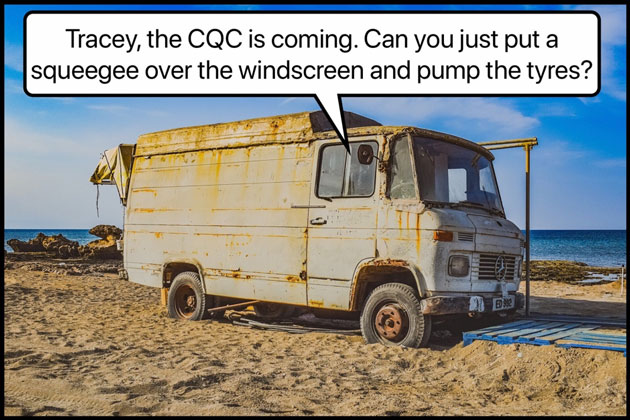 Another dental ambition I abandoned was to be an oral pathologist. I was a bit of a geek at dental school and I loved all the theory – it was just treating people I couldn’t stand. Oral pathology was gloriously complicated and I revelled in being able to identify cold, various strata of histology and pathology presented in spot viva’s. I particularly enjoyed the Licentiate in Dental Surgery exams at the Royal College of Surgeons in London, facing a panel of strangers and (in my mind at least), mesmerising them with my forensic knowledge of pathology and tissue stains.

My oral pathology hero was Jeremy Bagg and his quiet teaching style and respectful approach to students who knew nowt, only intensified my interest in the pathological arts. Unfortunately, that ambition was thrown out the window when I fully realised I’d have to go back to university after graduation and spend a few more years at the hands of the maniacs that had taught me as an undergraduate. The idea of spending my professional life merely peering through a microscope appealed throughout my career as a GDP though, and even now I regret not having done it, though practically, the need to feed a family was more of an obstacle to study.

I know it wasn’t ‘Casualty,’ but the idea of occasionally dramatically demanding “Bring me a microtome blade, stat!!” always had a ring of glamour to me. 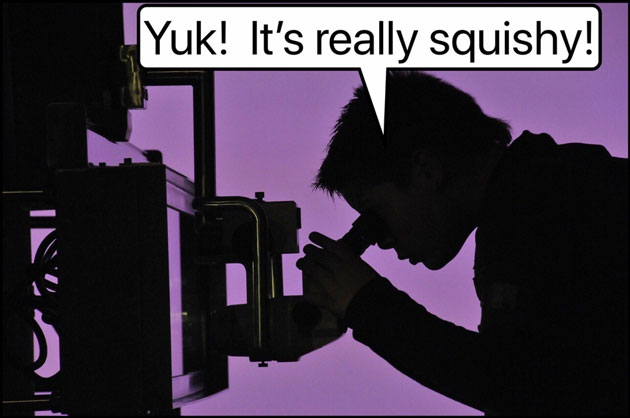 Now, I will admit from the off that I never fancied doing implants – there was way too much danger in the whole business as far as I could see. There was the risk of doing actual damage to a patient and the risk of litigation, so it was something I avoided like it was the Black Death. Having said that, I loved surgical extractions when they cropped up. I wouldn’t go seeking them out, but if one did put its head above the parapet, I was your man. I hated having to refer to the local oral surgery bods, seeing every referral letter as a personal failure.

So my love of ooze was in stark contrast to my love affair with dentures – and full dentures at that.   I don’t know why, but I loved making full dentures. And for years I harboured an ambition to restrict my practice to providing full dentures only. None of your fancy partials or implant-borne monstrosities, just straightforward common-or-garden complete dentures.

Another hero was the prosthodontist John Besford, who left me mesmerised at a lecture I saw him give in London one day. He was a complete denture genius and his enthusiasm was infective. To the end of my career I used techniques he imparted on that one-day course. It was after seeing him that I was inspired to try and restrict my practice to full-dentures only. The idea of no drilling or filling and no messy root-canals to get involved with was a dream. The problem was, patients in the area I was working in were as tight as a tick and the idea of setting up privately AND making a living was pie-in-the-sky.

Having said that, I DID eventually work one day a week in a private denture clinic, making just dentures. A friend of mine had set up a beautiful surgery with a laboratory on site, and it was an opportunity sent from Heaven. I spent two years at this clinic and it was like having a day off – EXCEPT when I occasionally had to get a drill out to prepare for a partial. It was at this practice that my affection for denture fixatives exploded into a full-blown love affair.

You weren’t concentrating. I said I loved making dentures. I didn’t say I was any good at it.

Yet another specialism in dentistry that I thought I might like, was orthodontics. But every time I vaguely entertained the idea of going back to university, an incident that occurred at dental school when I was an undergraduate came back to haunt me and threw me off the whole idea. 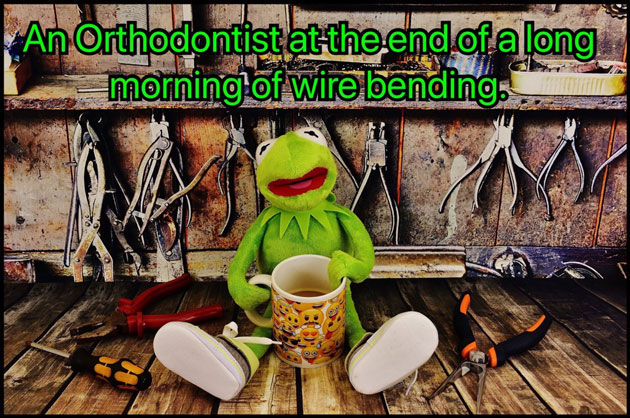 One day I was on clinic and was finishing a Concise composite with a polishing disc.  I hadn’t secured the mandrel in the slow handpiece properly and it flew off and went to the back of the patient’s throat.  The nurse retrieved it in a split second, but I was quite shaken.  That sort of thing had never happened before.  I apparently shook with anxiety in front of the patient I was told by the head of department when I had a disciplinary early the following morning.   I was given a dressing-down  not for nearly choking the patient, but for shaking afterwards. That was very unprofessional.

So, the reason I abandoned any idea of becoming an orthodontist was because of my fear of dropping brackets down the back of the throat, or decapitating the tip of the uvula when an elastic escaped my tweezers during seating.  As for the business of de-bonding, forget it.  The idea of a bracket flying off and going up the patient’s nostrils just filled me with rectum-quivering anxiety.

And if you think that was over-the-top, you didn’t see me in practice.  I used to bond floss to crowns with fissure sealant before I seated them, and the positions I used to get my fingers in to protect the airway when I was taking teeth out, it was like a dental Kama Sutra.

After a lot of reflection, I think my legacy will be I could give an injection pretty near painlessly and I could remove teeth more often than not, without breaking them.

I didn’t set the world alight with my dentistry, but at least, unlike Trump, I was never impeached.

Tweet
Tags:
Future of UK Dentistry dreams trump DentistGoneBadd Humour Dentistry Dental GDPUK.com
CPD, Or Not CPD - That Is The Question
It's a Question of Taste