"Beware That Patient's The HS2" - When Patients Act Like Express Trains. By DentistGoneBadd 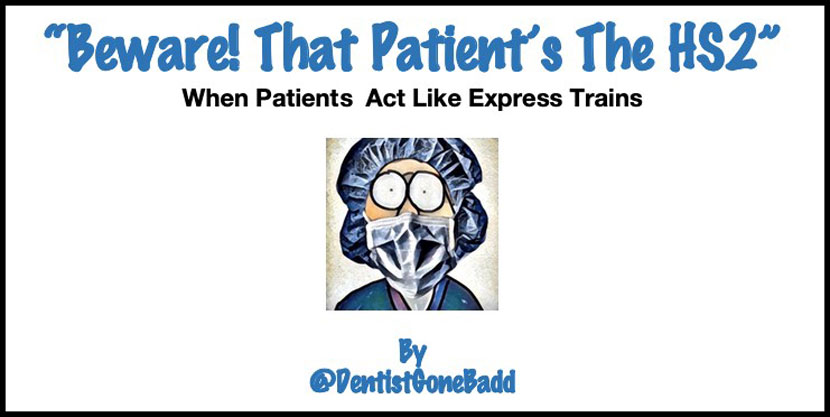 It probably doesn’t help that I spend a fair portion of my time looking online at professional indemnity websites, searching for case studies on dentists they have defended. I have no idea why I do this. I’m pretty sure it’s not dental prurience, I think it must be more of a Stephen King sort of thing. Fear is apparently there to keep us alive. Maybe I’m missing the adrenaline rush provided by dental practice, by scaring myself witless with tales of unfortunate dentists. The advantage I have now is that I can then calm myself down with a relaxing hot chocolate and Ken Bruce.

My internet trawling re-affirms that I’m better off out of dentistry, while I still harbour in the back of my mind, the niggling worry that I too could potentially end up as a case study in the not-too-distant future when a treatment I carried out in the past comes back and bites me on the bum. 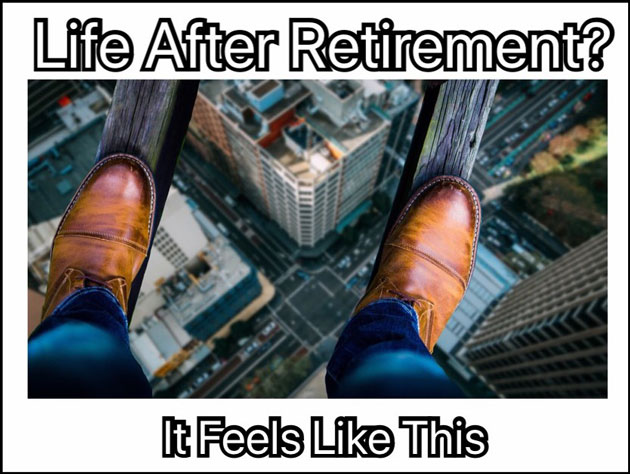 A case I read about this morning regarded a dentist who had been railroaded by a strong-willed patient into carrying out a treatment that had only a tiny chance of success. When the patient refused referral for the treatment – I’ll come out and say it, it was RCT – the dentist felt compelled to carry it out. It sounded like a nightmare molar RCT and despite the practitioner explaining fully the problem and why it wouldn’t, the patient thought a crown would sort the problem out. One canal couldn’t be found and when the patient turned up to see another practitioner with a request for a crown, it was explained the root-filling hadn’t been completed. The inevitable complaint ensued, but fortunately the resolution was ultimately, relatively easily resolved, with dosh of course.

The most troublesome situations I got into frequently, was as a result of me being vehemently anti single-tooth denture. I had buckets of empathy for patients who hated cumbersome full coverage dentures foisted on them by previous practitioners to replace an isolated tooth.

Having said that, my way of doing it was to provide Maryland Bridges, which I have always felt were created by Beelzebub himself when he had got a monk on. Everyone has been there. You’ve got a patient in front of you with a gum-stripper holding all sorts of munge against the lingual and palatal surfaces of the teeth. Three years before I retired, I saw a young girl of 14 with congenitally missing 1’s. She’d had ortho to open the anterior spaces but had then been provided with a full plate and Adam’s cribs on her sixes which she was condemned to wear until she was 18 and could be considered for implants - assuming she could then get them on the health service. So, I placed a couple of Marylands swinging off the 2’s and 3’s after consultation with an orthodontist, and mercifully they are still there now according to a colleague – probably help by a residual anterior open bite. It could have gone horribly wrong but I felt it was worth the risk and the horrendous lab bill to give the girl an easier time during the difficult teenage years. 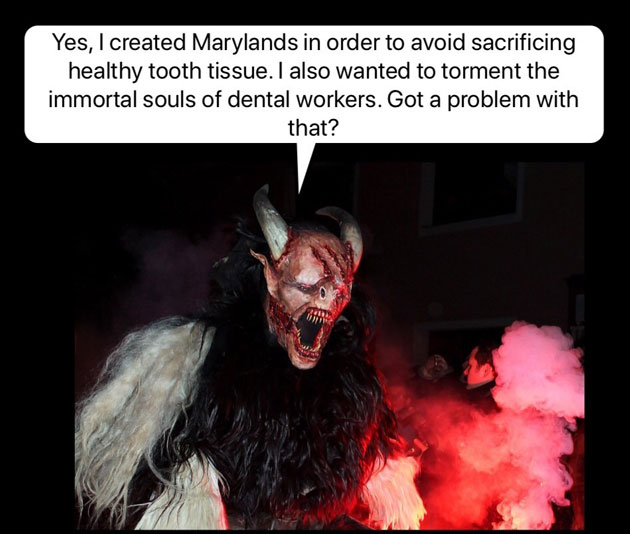 As I implied by my reference to Satan, my experiences with Marylands have been less than happy yet I still felt they were worth a shot rather than hack even a restored tooth into the shape of a micro-skewer.

My record success with a Maryland was 15 years up to the point I retired – I naturally assumed it had probably fallen off the day after my retirement date - and my record de-bond was less than 24 hours. I was lucky with my failures. The patients were warned verbally that the whole process was forged in the White-Knuckle School of Dentistry and thankfully, they were all forgiving – once I’d either refunded or rectified the situation with a costly replacement that is. I can’t say I remember being railroaded by a patient but I was always a sucker for pleading eyes and so the only brow-beating was self-inflicted. I never kept a tally of the number of Maylands that failed in my hands, but I would estimate that over 30 years, it was probably at least 30. That actually doesn’t look great when you write it down.

I had a nurse who worked with me for years and whenever I started to form the word Mm…she would wriggle in her chair uncomfortably, knowing that she was in for months of mixing Panavia and trying to calm a lisping patient down on the phone while explaining the tooth would have to be sent back overnight for sandblasting.

I think part of me wanted to emulate the work of dentists who had placed heroic Marylands that had lasted many years. I was irked by a Maryland placed by a retiring dentist I succeeded at a corporate practice. He had put the bridge in nearly thirty years previously according to the notes and it shouldn’t really have lasted. The patient was a prize-winning bruxist with an edge to edge anterior occlusion and the dentist had replaced all the lower two’s and one’s with a Maryland which had only two wings, swinging off the lower 3’s. The wings didn’t even cover the whole of the lingual aspect. Of course, the bridge came off when I was looking after the patient and had to be recemented several times. I still shudder at the look of disappointment in the face of the patient on each occasion. His previous dentist had kept the contraption in place for three decades and all I could manage at best, was three weeks. I was browbeaten into recementing it every time even though I knew another solution was needed.

I admit that I also got hectored into doing root-fillings on many occasions. Again, you will recognise this situation – when the patient desperately doesn’t want an extraction, can’t afford to see a specialist privately, and access to an NHS facility in a dental school is not possible either due to the centre being too far away or being oversubscribed. So I’d openly admit that my root-filling skills were less than optimal but I’d be prepared to ‘give it a go.’   Usually after I’d had about six attempts (truly, my average) at trying to find a canal(s), the patient would give up and either have the tooth removed or use the money they had saved during the course of treatment, to go privately. I played the long game.

Small point, but when I trained in the early 80’s and shortly after I qualified, I never experienced any problems with finding canals. Now it’s like looking for the needle in the proverbial haystack. I have always blamed calcium hydroxide-based lining materials and their abililty to encourage the growth of secondary dentine.  It was like the pulp chamber said “Right, that’s it. I’m off, you with me lads?” and the root-canals followed suit. When we used things like Stailine, the zinc oxide eugenols and the zinc phosphate liners under amalgams, there was never any problem finding canals. I’ve always blamed endodontists for introducing calcium hydroxide in order to expand their empires. 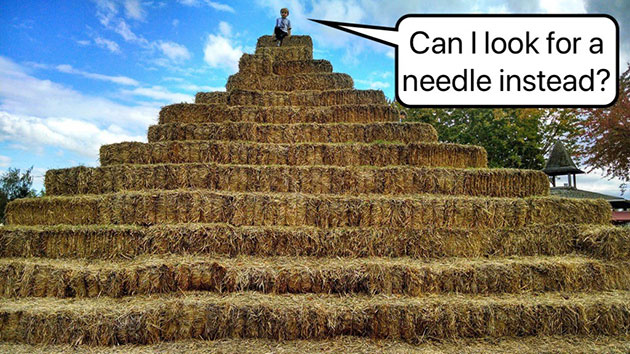 Another thing I got suckered into was doing extractions or surgicals I didn’t fancy doing in practice, particularly in the early days. When I left dental school I really didn’t feel equipped to tackle surgical extraction of 8’s and awkward molar roots, so I persuaded a local oral surgeon to show me how they were done. Effectively, I worked as a house officer one day a week in theatre and I learned all sorts of stuff including exposing buried canines and bonding ‘power-chains’ to them as well as removing horizontally impacted 8’s.

In the hospital environment, conditions were ideal – we had all the right kit and a compliant unconscious patient with no wriggling. It was a bit different in practice with an anxious patient and a less than ideal surgical set up where the coolant for the surgical burs didn’t exactly come out of a nicely packaged bag held up on a tripod. Again, and I don’t believe I’m unique in this, I was persuaded by patients who knew me as their long-standing dentist, to carry out extractions and surgicals that I just knew were going to be a…bitch. I fell for it every time. Other than dentures, extractions and surgery were the only thing I felt confident in, but even so there were certain situations I just didn’t relish and promptly regretted as soon as I heard the apical third splinter. I was never one to leave bits of root in so I’d go after every microscopic splinter of tooth till it was all out. I remember spending one entire afternoon and having to cancel all the rest of the patients, removing a lower seven from a lady with a jaw made of graphene. I blunted two surgical burs during the procedure and every time I used an elevator on the roots (we didn’t have luxators, we were savages back then), they broke. It was like taking glass out of granite. That particular tooth looked relatively straightforward and didn’t particularly have to be persuaded, except, a colleague warned me that he’d had trouble removing a tooth from that particular patient before. He said “Don’t do it,” but I did. Again, I railroaded myself into it and took a financial hit in consequence.

Another treatment that I often did against my better judgement was dentures. I think I was pretty reasonable at them, at least I enjoyed doing them. I’d often be asked to replace failed dentures for colleagues and I’d have a stab with a respectable success rate.

One day I was asked to do a new set of full dentures for a rather fiery pensioner for whom my colleague had failed with two attempts. The angry man had ridges so flat, they were almost inverted and he refused to be refunded and go elsewhere since “You lot have wasted so much of my bloody time, I’m going to waste yours.” He was like a bull in a China shop.

I felt I couldn’t refuse since my colleague was in a tricky situation, so to cut a long story short, after many fractious sessions with Mr Angry, I failed. I’d explained right at the start of treatment that he realistically had to expect to wear denture fixative and he accepted this since he’d used it since he was about 30. On the day of the fit, I slapped the fixative in the denture before I tried inserting it. The effect was immediate. As soon as he tried to talk, it was like watching Michael Flatley at his most frantic moment in Riverdance. The dentures danced about like Boris Johnson trying to avoid a press conference and I’m sure at one point, the lower denture somersaulted similar to Gene Wilder’s gambol in Willie Wonka And The Chocolate Factory.