Is your practice 'No Deal' ready?

"Roll Up! Roll Up! Get Yer Teeth Fixed While Stocks Last!". By @DentistGoneBadd 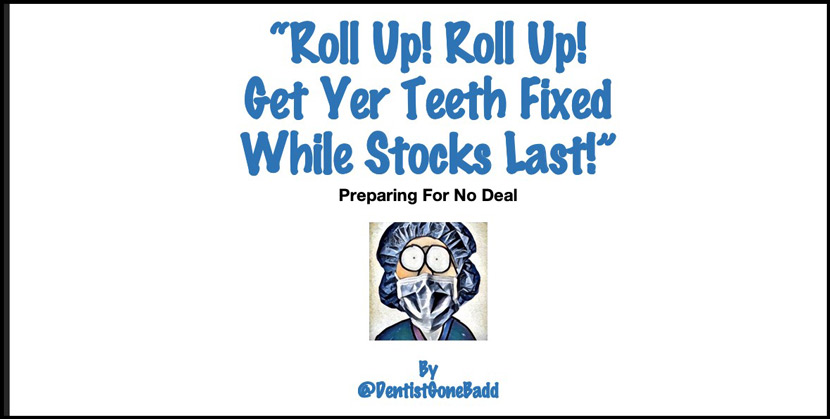 Roll Up! Roll Up!
Get Yer Teeth Fixed While Stocks Last!

(Bracing Yourselves For Brexit)

Last week, the Chair of the Principal Executive Committee of the BDA, Mick Armstrong, was a signatory to a letter to Barmy Boris, from the heads of 17 UK royal colleges and health charities saying that  clinicians are expressing that they have "significant concerns about shortages of medical supplies.”

The Government said that it was working with the health sector on “robust preparations” and a spokesman for the Department of Health said the Government was doing “Everything appropriate to prepare to leave the EU on October 31st, whatever the circumstances.”

Phew. That’s OK then. You can rest easy, just like Jacob Rees-Mogg in the chamber of the House of Commons last Tuesday evening. 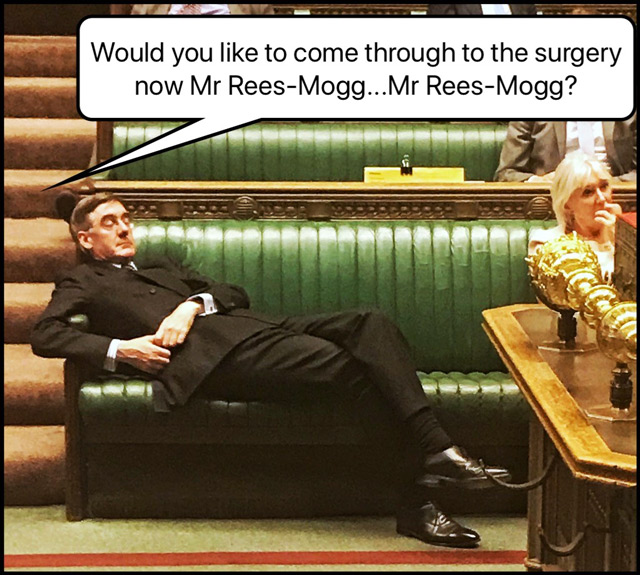 I would be the first to admit that if I were still running (I say running, vaguely nodding to everything my practice manager demanded would be more accurate) a practice, I’d currently be whirling around in a panic, rather like a rabid Manchester United  supporter, desperately searching for some past, but long-lost  and never to be regained, glory.

I’d be shapeless if there were shortages.  I remember how I’d be gripped by a mighty dread if we were down to six boxes of large examination gloves in the practice, despite it being only me that used them. No matter how often my PM said “If I order them today, they’ll be here tomorrow,” I’d still be overtaken by fantasies that tomorrow, all roads into Oxfordshire would be blocked suddenly by snow, even in mid-July. I don’t quite know what I was scared of, having to close up the surgery because we couldn’t work, or the thoughts of going anywhere near a patient without a blue nitrile barrier of 6-mil between me and them, whatever a ‘mil’ is. 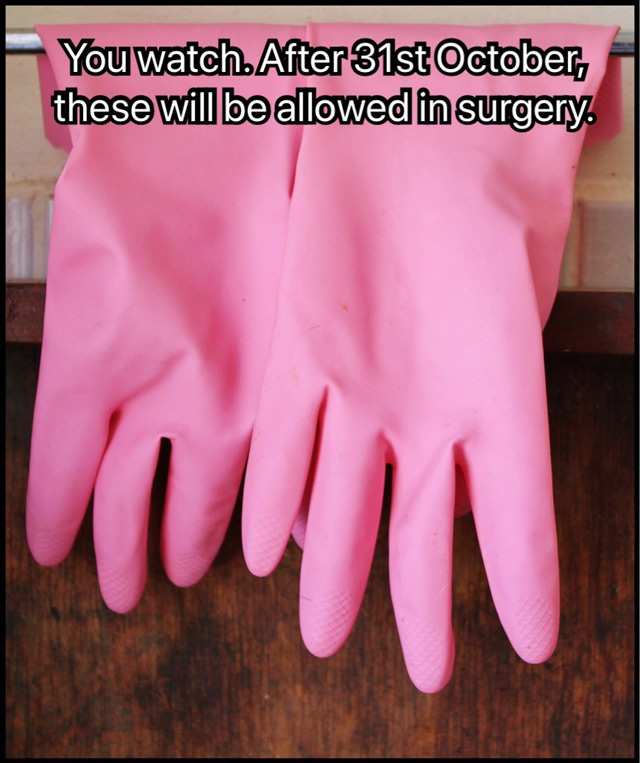 The same applied to masks. I couldn’t at one time tolerate those elasticated masks that made my ears stick out like Mr Spock. I have always had this thing about my ears being out of control anyway and felt that if they stuck out any more, the wind-resistance would slow me down as I ran to reception to tell them not to book me any more emergencies in. It was tie-ups or nothing, despite the fact that I once dislocated my arm tying the neck tie at the back. It taught me not to try a double-bow again. I don’t know why I did a double-bow. Tripping up wasn’t an issue. I still double-bow my comfy pensioner’s Clarke’s shoes, just in case I trip up if they come loose. My mother still frets about this possibility. 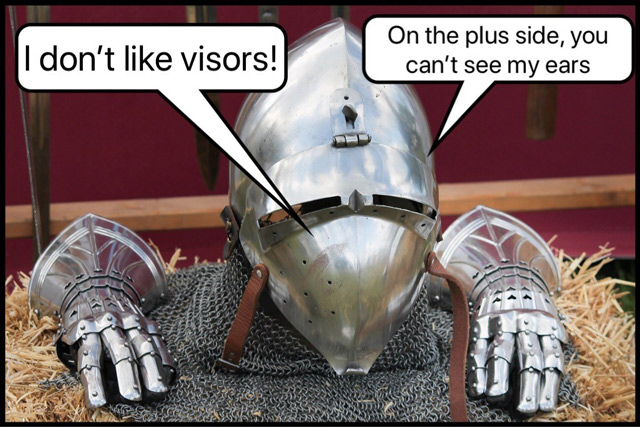 As for shortages of local anaesthetic, that really IS brown corduroy time as far as I’m concerned. Some years ago, I remember there was a shortage of anaesthetic – my dodgy memory seems to think it was prilocaine. I seem to remember that the shortage was due to a licence running out or something, or it may be that the weasel spit they use to stabilise the drug may have been depleted due to the great stoat cull of 2011. Even though I very rarely used prilocaine, I still worried about it. I once worked with an oral surgeon who advised against using it. He’d had loads of problems with patients not being sufficiently numb for minor oral surgery procedures and he reckoned the use of adrenaline in lignocaine was worth the risk of increasing blood pressure. His theory was that patients under stress, as they would be if they had poor analgesia, would experience a greater rise in BP than they would with lignocaine and adrenaline and good analgesia. It would certainly put my blood pressure up if I had to carry out a procedure without being able to numb someone up. 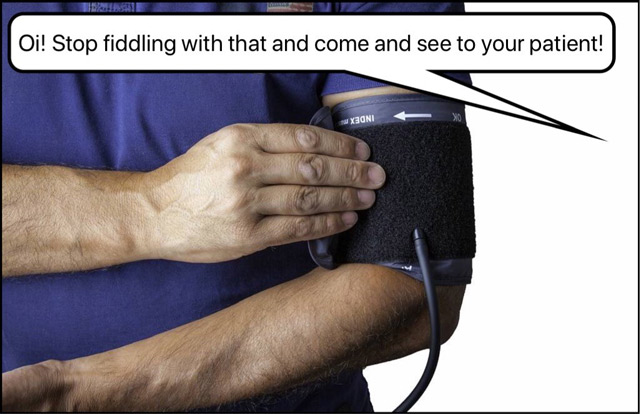 Not that long ago, in my area, we experienced a shortage of lignocaine paste for topical application. Since I used it on ALL patients irrespective of age, before giving local, I was inordinately stressed when we couldn’t get hold of it. I found myself eking the stuff out in 1mm increments instead of the quantifies I usually doled out – roughly the amount you’d need to grout Hadrian’s Wall.

I hope you’ve now got the impression of a man who doesn’t cope with material and equipment shortages very well. I know for sure that I’m not the only dentist who goes ape when materials are scarce.   A colleague went ballistic when we found we suddenly had only one etching syringe between the two of us because the contents of one of the syringes had solidified into what looked like a spikily weird, lime-flavoured jelly.

As a ‘no deal’ fearing avowed Remoaner with volcanic irritable bowel syndrome, a recurring story in the national papers that freezes my soul is the idea that toilet paper could be in short supply in October. Now I’m not sure whether that’s an EU supply chain issue, or a prediction of panic-buying from citizens who are similarly, slaves to their bowels. The paper industry has expressed concern at the risk of disruption to the supply chain in the case of no deal or a plunging pound. As consumers of vast amounts of paper in the form of tissues, bibs, disinfectant wipes, hand towels, sterilisation pouches and “I Heart My Dentist” motivational stickers, shortages of paper goods could cause incredible disruption. Most of us have had patients who have held us up or interrupted treatment because they suddenly realised they needed the loo – imagine if the patient decided to nip back home three miles to use their own facilities because the practice was out of Charmin Ultra Soft. 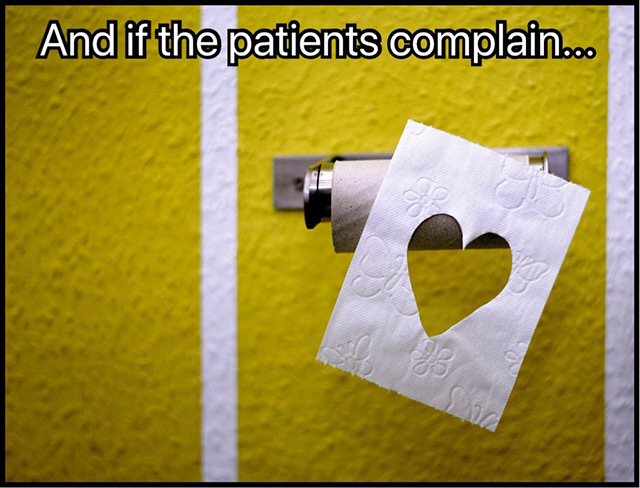 And paper shortages are no joke. It was admittedly down to poor management, but a sister corporate practice to the one I worked in before I retired, once ran out of disinfectant wipes. It was apparently the PM’s practice to keep stock down to an absolute minimum and to order as and when stock was critically low and could be ordered overnight. One day, her system failed and the practice had literally no disinfectant wipes left in the practice. They apparently got over the problem by saving the liquid at the bottom of the proprietary wipes and dipping tissues in it in order to wipe down. There MUST be rules and science against that.

The problem with Brexit, and particularly the ‘no deal’ variety, is that we really don’t know how the whole mess is going to work out. We don’t know which supply chains are going to be hit (if at all) and whether the possible fall in the pound and increase in tariffs if we DO access supplies, will make running a practice prohibitively expensive. Most practices and in particular, the NHS practices, can’t afford to stockpile. Most practices do order what they need on a week by week basis, simply because it is unaffordable to stockpile the incredibly expensive stuff we use every day. A bottle of bond can cost up to….well actually I can’t find that out without creating an account with a supply company. They are a bit cagey about the prices of bond because it costs so much, but I bet even just doubling up can cause a dent in most budgets, especially in the case of multi-surgery practices. 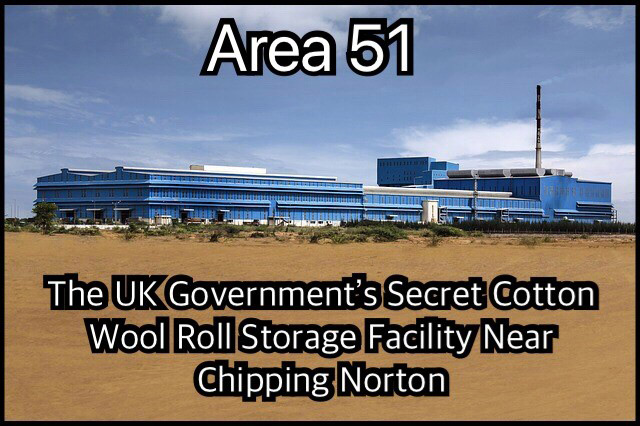 The problem I foresee is that I have my doubts as to what the Government would regard as medical supplies. WOULD they regard dental stuff as ‘medicines?’ I would hope so, but having a few seconds ago heard on Radio 4 that Boris Johnson has now even lost his own brother from Government, I wouldn’t put money on it.

Do I have any answers? No. The only thing I WOULD do, is hot foot it down to Aldi. Their loo roll is incredibly scratchy, but at least it’s cheap.

Tweet
Tags:
Dentistry Dental GDPUK.com
Two Lasers and a kilo of Ozone please.
Negative reviews can be upsetting by @DentistGoneB...