Negative reviews can be upsetting by @DentistGoneBadd

Negative reviews can be upsetting. Could the answer be an App? "We'll Be With You In Ten Minutes Mate" Should We Adopt The Uber Model? By @DentistGoneBadd 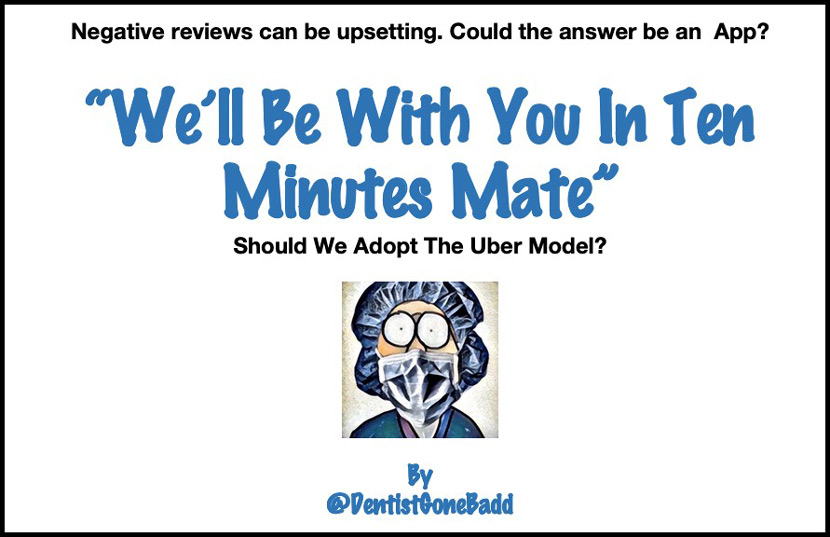 What Is A GDC Hearing, But A Negative Review That’s Gotten Well Out Of Hand?

A few days ago, the story broke that the Queen has given Boris Johnson permission to suspend parliament from 10th September until 14th October to allow the Government to head off parliamentary plans to oppose at a ‘no-deal’ Brexit. Many in the know have labelled this action as a ‘constitutional outrage.’  I would describe it a dangerous and ridiculous plan, devised by a dangerous and ridiculous man.

A couple of weeks ago, Donald Trump aired the ‘absurd’  proposal that the United States should buy Greenland off the Danes.  He did do this.  He said it on camera. I saw him do it.  He can’t claim it was made up by the ‘fake news media.’ A week or so later, there were reports from Axios  outlining that President Trump had suggested multiple times to senior Homeland Security and national security officials, that  they explore using nuclear bombs to stop hurricanes from hitting the United States. A number of people heard the President make the comments as well as being briefed on a National Security Council memorandum that recorded his comments. He did do this.  He said it to a government stenographer.

Please remember the above facts before dismissing my absurd proposal below.  I’m supremely confident that what I’ve written is far from being the most ridiculous thing you have heard over the past few weeks.

A few months ago, a young dentist I know admitted being deeply upset by  comments made about her by an ‘anonymous’ patient on the NHS Website (formerly NHS Choices).  It’s best I don’t go into detail, but the gist of the patient’s beef was that the practitioner kept her waiting for twenty minutes and wasn’t ‘interested’ in the patient’s concerns regarding a misaligned tooth.

Now, I know this practitioner very well and I know that she wouldn’t have been dismissive of any patient’s concerns.  She DOES run late occasionally for which she only has herself to blame.  She is meticulous in the work she does and won’t abandon treatment  unless it’s perfect.  She’s also incredibly popular in the practice she works at, and has patients coming out of her ears.  She’s also my new dentist.  I haven’t told her that yet.  I’ll break it to her in a couple of month’s time.

This comment on the NHS website was a surprise to both of us since this particular clinician has never received any negative comments as long as she has worked at her practice (a decade) and the comments book held on reception was 95% full of nothing but love and praise for my former colleague.  I would have been immensely proud of the stuff people said about her if it had been said about me (she is a wizard at aesthetic composite restorations) and it was a real blow for her that these comments were publicised on the NHS website for the world to see.  In the practice comments book, the best I ever got was “He didn’t hurt me.  He has a decent playlist.”

Many GDP’s  I know would agree that the patients you remember most, are the ones who are a nuisance.  Memories of the nice patients tend to be swamped by vivid recollections of the simmering cauldron of nightmarish experiences meted out by  awkward and unpleasant patients. I never really believed that patients acted obnoxiously simply due to anxiety.

Having negative comments displayed on the internet for all to see can have not only a detrimental effect on an individual practitioner’s morale, it can also have a profound effect on the practice (and business) as a whole.  I don’t know about you, but I DO look at TripAdvisor myself and look way less favourably on a hotel receiving a lot of  poor reviews, so who could blame a patient for doing the same thing?  Having said that, I am always a little suspicious of universally glowing reviews, particularly when the reviews contain similar adjectives or phrases.  The crooked practitioner who bought my practice a few years ago lost about 500 patients in 3-4 months because he was a singularly odious  individual.  He had quite a few negative reviews on the (then) NHS Choices website, which fitted in with reports of him I’d received off old patients, but they were countered with a torrent of glowing reviews which repeated phrases like ‘Friendly and welcoming,’  ‘Took the time to outline my options’ and the unlikely ‘Respected my privacy and dignity,’ as well as consistently spelling the same  words wrongly. 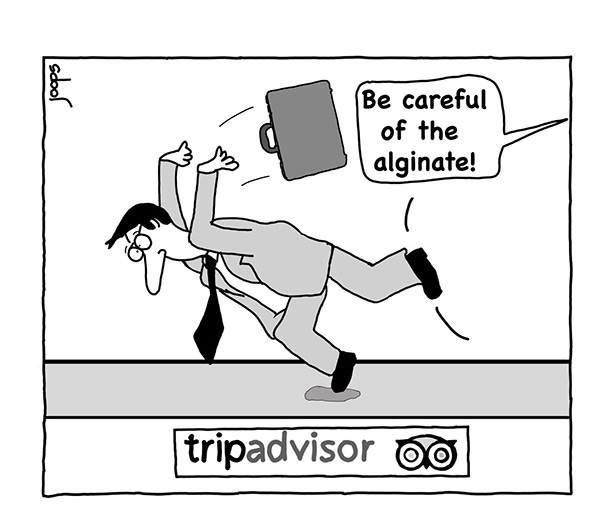 I vaguely remember a time when dentistry was considered to be a specialised branch of the medical profession.  In those days we had patients and we couldn’t try and attract them by advertising, because the GDC forbade it.  Nowadays it seems that the perception is that we’re a specialised  branch of the beauty industry, and even that distinction is being blurred by beauty parlours offering whitening and webmasters offering orthodontics.

The fact is, patients are now pretty much punters who look for the best bargains, and if their consumer desires aren’t fulfilled, they won’t hesitate to complain or give negative reviews. We’ve become service providers.

…you have to begrudgingly accept that we’re out of the medical enclave and are actually in an “I’m going to contact the Trading Standards people” dog eat dog situation.

Now the NHS website does allow practitioners to respond to negative (or in the unlikely event you get one, positive) reviews, but frankly, once the damning review has gone online, any web-based apology or attempt to look into a patient’s whinge will do little to allay in the public’s mind that there’s no smoke without a Bunsen left unattended.

So is there anything we could do to counteract, often unwarranted bad reviews? I saw a lot of them online last night and they really often are trivial or plain spiteful. Practices are allowed to report reviews as inappropriate, but half a day online before you notice them is enough to cause dents in reputations and delicate psyches.

Is it time to pre-empt unjustifiable criticisms? Time to put up a sturdy defence? If so, why not go for a sneaky punch while the referee isn’t looking?

Have you ever used Uber? I haven’t. I’ve read about it, but I live in an area where Uber drivers are as rare as pixies. I have read up on the system however, and was intrigued by the scoring system. On the Uber App, you are able to rate your driver on a range from 1 – 5 depending on your experience, and like the NHS dental website scores, the ratings are there for all to see.

Some people may NOT be aware though, that Uber drivers similarly score their passengers. A passenger who is rude or leaves a low tip may be scored a 2.5 and may be avoided the next time they try to summon a taxi. A passenger who vomits on the back seat may be given a 1.

Now, what if we were to borrow the Uber model and score patients? And that score was circulated on an App. Let’s not forget, we don’t have ‘lists’ on the NHS at the moment. Patients are officially only taken on for one course of treatment. So if a new patient turned up and had a low score due to being generally mardy or failing to pay patient fees on time, another practitioner would be able to see the score and decide whether or not to take the patient on. If the patients caught on what was happening and appreciated that they were being marked for the way they behaved, I reckon it would improve patient behaviour pretty swiftly. You could even mark them down if their brushing wasn’t up to the mark.

This is how it would work:

ALL patients would have to download the free App – let’s call it Goober. When they have downloaded Goober from the Apple App Store (I say Apple, it could be other App stores. I don’t know anything about these – cheap phones bring me out in a rash), the patient is allocated a QR code which represents a unique patient number which the patient is not allowed to see and from which they cannot be identified by other patients. When the patient goes along to register with a new practice, the QR code is scanned by the receptionist and the coded number is immediately transferred to the practice software system for the dentist to see. Dentists will have access to a different version of the Goober App. The dentist puts inputs the ID number of the patient into the App and he or she can immediately see the patient’s rating and decide if the score is safe enough to accept the patient for treatment.

No names will be used on the App and only the dental staff will know the patient’s rating. Existing patients will also be registered in the same way. Since the current NHS website allows patients to put up damning comments anonymously, dentists will also remain anonymous. The beauty of my system is that patients will be blissfully unaware of the scores they have until they try getting an emergency appointment at another practice after they have DNA’d for you fifteen times. Just for a laugh, these patients would be given a score of 1.2.

If they feel it appropriate, dentists can put comments up on the App to explain their scores. “Always claims to have been stuck behind a lorry” or “Fidgets and grunts” being examples. I would envisage once the App has been up and running for a while, introducing software bots into the system that trawl the internet for negative comments and alert the practitioners involved so they can update patient scores. 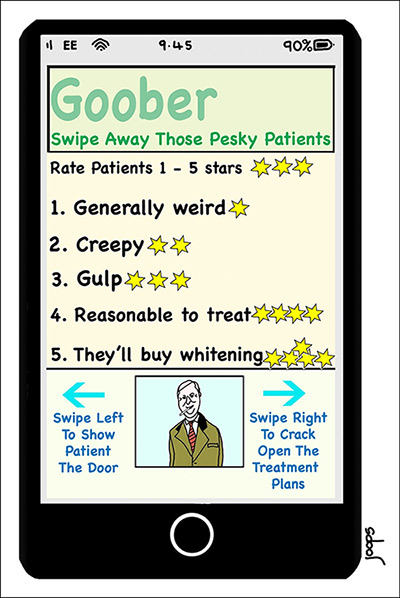 Yes, there are a few stumbling blocks. Patients will have to accept the small print conditions – namely allow information about them being spread around the entire UK dental profession - but nobody reads terms and conditions anyway and they can be presented in an inconsequential way such as “Do you accept derogatory cookies?”

I mean, really, it’s perfect. At a swipe, dentists will be able to tell reception whether or not to book the patient in, and if the patient kicks off at being rejected, you can give them another low score immediately. Result!

Yeah yeah, it probably contravenes all sorts of moral and ethical norms, but so do Boris and Donny.

In fact, I wonder if I could sell this idea to Donald Trump?

Tweet
Tags:
Brexit feedback online Review trump Humour DentistGoneBadd Dentistry Dental GDPUK.com
Is your practice 'No Deal' ready?
Who do you trust? Who can you trust?