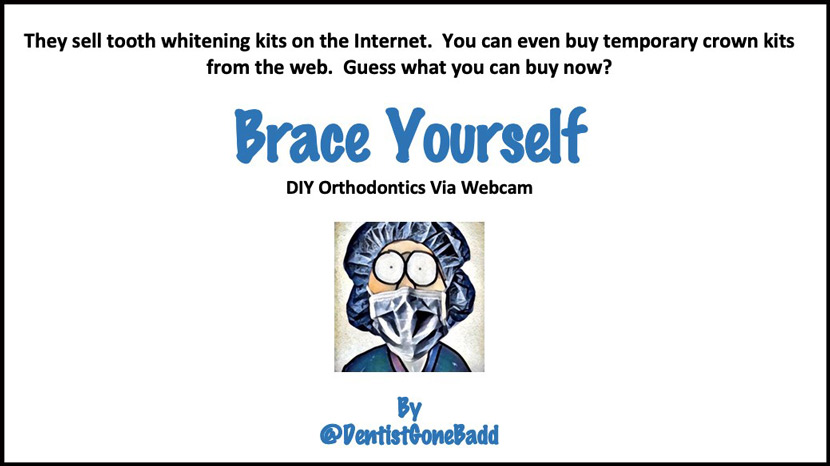 (Orthodontics On The Internet)

Eight years or so ago, I went on a mini-implant course. The course was aimed at arming dentists with the knowledge and skills to be able to provide abutments for denture wearers who found it difficult to achieve retention or stabilisation on their Lincolnshire-shaped gums. The course was held over a couple of days. The first day covered theory and an introduction to the tools of the trade and their practical use. The second day was held in the course tutor’s practice. Here, participants were given the opportunity to place an implant each.

The course was well run, and the tutor was excellent. At the end of it, we were given advice on what the equipment we needed to purchase in order to pursue mini-implant provision, and some participants clearly intended to launch into the teeny-implant bizz, the following Monday.

Up to the point I retired, the number of mini-implants I provided for patients totalled…one. That’s right - the one I did on the course. Being Mr Caution, I concluded that despite the excellence of the course, I just didn’t know enough or have sufficient confidence to drop another titanium rod in somebody’s atrophic jaw, let alone swing a denture off it, without further training. For me, unless I could prove to myself and the world that I had sufficient knowledge to place mini-implants, it was just another thing I could get into trouble for if anything went awry. As a youngster, there was always a policeman around if I decided to ride my bike across the pavement to get to the road. I would be bound to get into trouble. 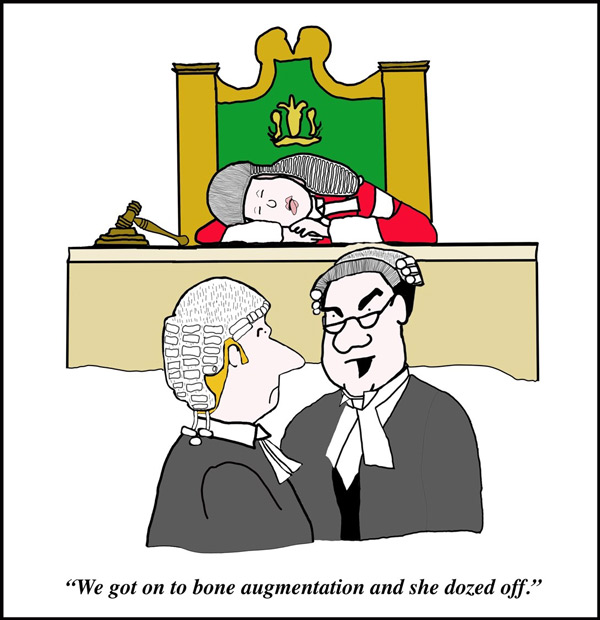 It’s probably no surprise then, that I decided not to enter the fantastic and ethereal world of rapid/quick orthodontics. I worked with colleagues who had dipped their toes in the swift orthodontics pool and superficially to this point, seem to have not needed dragging out, unconscious, by a lifeguard. But for me, I again felt that it was another thing that could potentially invite solicitor trouble in the future. Both my colleagues had attended courses of only a few (if that) days. One did a couple of weekends, the other did one day, didn’t think it was enough and did another day.

In my brain I pictured this scenario playing out at 37 Wimpole Street:

“So Mr Badd. What are your qualifications in orthodontics exactly?”

“Erm, I got a sustificate from the company that supplies the appliances.”

“I see. Can you tell the members of the committee what length of training you have had in orthodontics?”

I am old school and in my day, dental graduates who wanted to do sophisticated orthodontics did MOrth over three years, not have a few days of basic guidance then fly by themselves. It’d be like asking an amateur glider pilot to land a jumbo jet after a couple of days in a flight simulator. Occasionally, in the early days, I’d put a stray incisor back into line with a removable (We were allowed to do that back then. I think as GDP’s that’s probably a no-no on the NHS currently), but that was my limit.

So when I read recently that a United States based internet company was about to launch cheap ‘invisible braces’ online in the UK, alarm bells rang. The company claims that the cost of treatment is up to 60% less than comparative treatments provided by dentists in practice. Patients can opt to either order an impression kit to take their own imps at home, or go to one of only half a dozen of the company’s UK shops for an intra-oral 3D scan. If you go for a scan, it seems that it’s the only time you will have any human face to face contact. It’s not clear whether a dentist carries out the scan. 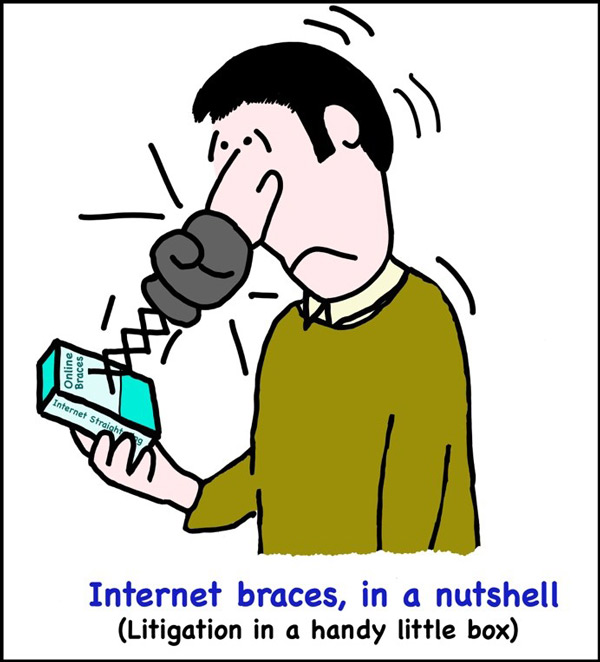 Now you may ask: “Why alarm bells? It’s an internet company. They’ll soon come a cropper!”

Well, once casts are made – and this is the worry – registered dentists or orthodontists then look at them and decide if treatment is possible for the client (I can’t bear to use the term ‘patient’). If treatment is deemed to be appropriate, a set of clear appliances is constructed, once the patient has approved a mock-up model of the proposed final result.

Rather than attend a clinic for checks to be made, ‘remote teledentistry’ allows an assigned dentist or orthodontist to check in with the client every 90 days to check on progress remotely. It’s like dentistry via Alexa. 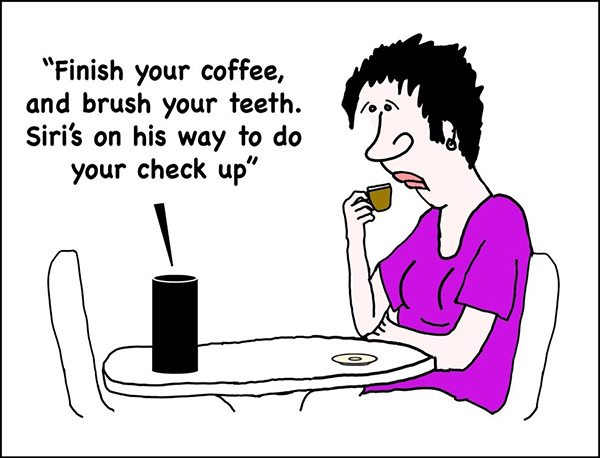 So many questions. So many qualms.

In my, admittedly inexpert opinion, anyone who contemplates taking on the role of teledentist would need their tele-head, testing.

A registered dental practitioner is effectively doing a case assessment based on models only and is then prescribing treatment without carrying out a thorough oral examination. There is no mention on the company’s sparse website which would indicate a patient would have to have an examination with their own dentist before entering treatment, to ensure they are dentally fit. This would be one way around a failure to examine the patient directly. Having said that, if you used that as a defence against a complaint for treatment you provided without carrying out an exam, see how far you get.

“So you didn’t do a full case assessment with examination before prescribing treatment?”

They may come later in the process, but there is no mention of the risks of treatment in the company’s blurb.   Root resorption, pain, increased caries risk or transient gingivitis is not mentioned. And of course, having not carried out a basic examination, there is no possibility that a proper assessment of risks could be relayed to the patient anyway. The supervising practitioner has no idea of the patient’s periodontal status, oral hygiene regime or mobility.

As for a check in with the dentist – by webcam (presumably) – every three months? How can you keep a close eye on treatment progress with a gap of three months, or carry out a thorough check via the client’s webcam (or phone camera)? How can the latter possibly equate to a thorough hands on examination with mirrors and an operating light? 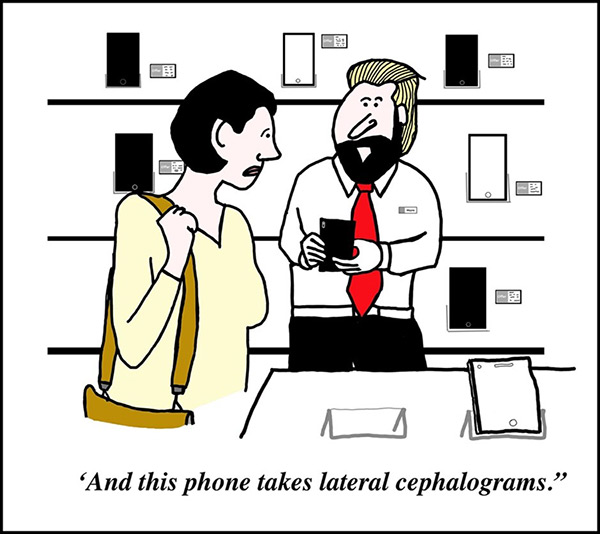 And if the treatment does appear to be successful, how will it be retained? Well the company offers retainers at £70 per set, but there is no mention in the company’s blurb as to what happens if a patient needs permanent fixed retention – not that I’m sure how that would be assessed from, say, 250 miles away anyway.

I tweeted a few days ago that the dental litigation fraternity must be rubbing their hands in glee at the prospects to come. And this is why I fear for any dentists who involve themselves in this sort of enterprise.

As far as I can see, as the prescribing and supervising dentists, they will be as defenceless as a beached mermaid – they won’t have a leg to stand on.

Tweet
Tags:
litigation diy webcam intervals orthodontics DentistGoneBadd Humour Dentistry Dental GDPUK.com
That'll Do Nicely by @DentistGoneBadd
Where would we be without the CQC?