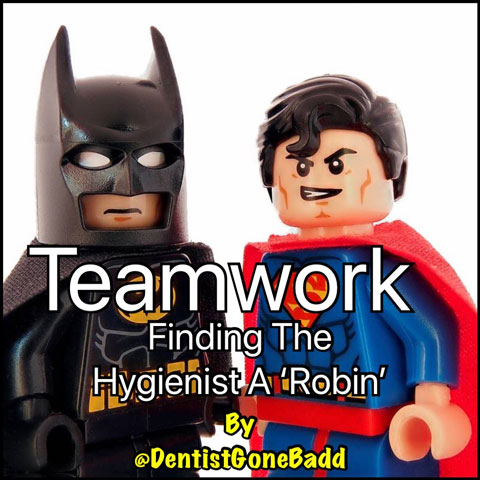 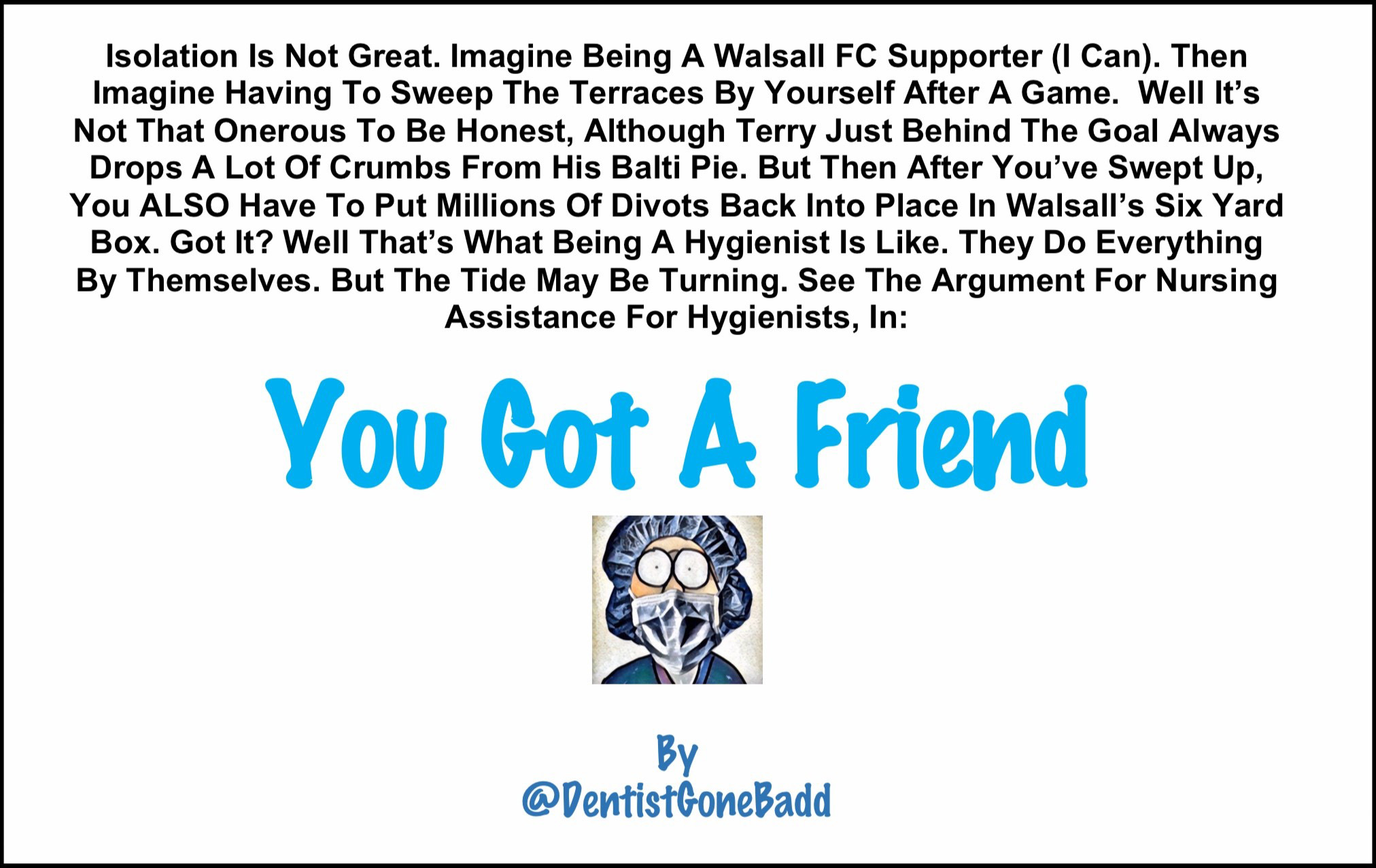 So Lonely
The Perils Of Dental Hygienists Working Alone

I admit it, I’m a worrier. As a practice principal, I was a worrier on steroids. I recall even my thirteen year-old daughter at one point looked me in the face and said: “Dad, you’re a stressmonger.”

The source of my stress, apart from having a daughter that dished out such searing home truths, was (obviously) running a dental practice, though I sold it, escaping through the back door just as the CQC was coming in the front. 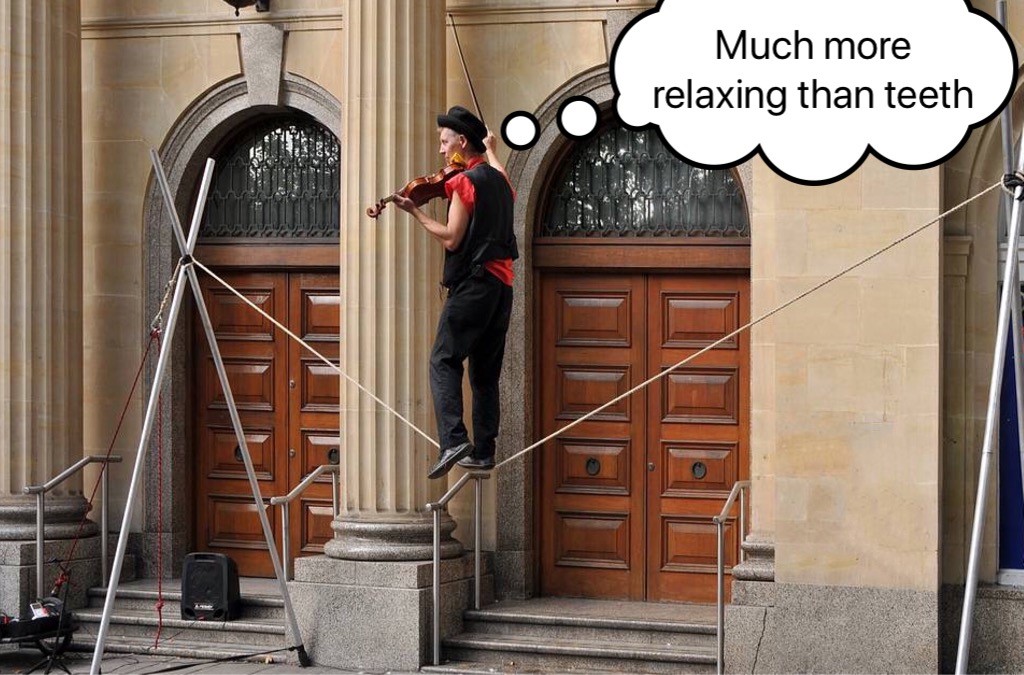 There are many stressors facing practice owners these days, not least, particularly in NHS practice, the question of viability. With all the costs associated with meeting CQC compliance and ensuring legal protection, a lot of practices, despite what patients and some dental nurses think, struggle to make ends meet on a week-to-week basis.

So it may be concerning to some practice owners that a debate is at long-last being opened up - the proposal that dental hygienists should be routinely provided with dental nursing assistance when they are treating patients. The conversation began following a recent article in the BDJ in Practice Journal by Len d’Cruz and Reena Wadia which asked ‘Can a Hygienist work without a Nurse?’ The British Society of Dental Hygiene and Therapy (BSDHT) at the time of writing was still to post its response on its website and was awaiting input from members – I assume the servers are overwhelmed. In essence, the article was outlining how the day and practice of hygienists could be arranged in order to facilitate solo working. 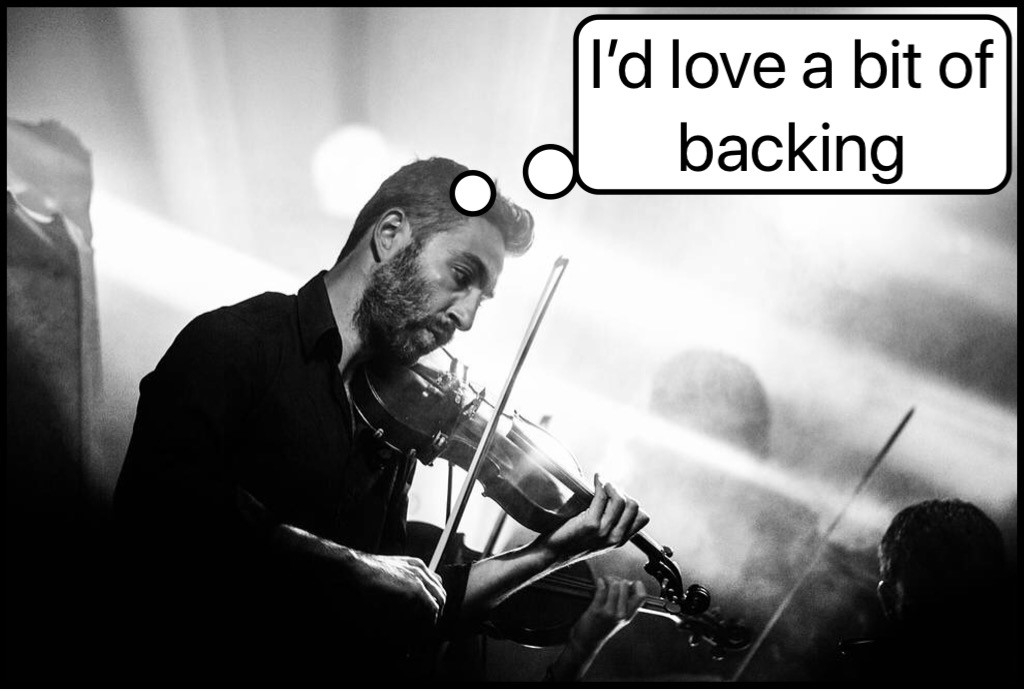 Affected participants on social media however, were pretty swift to react and a lengthy response was posted by Dental Hygienists/Dental Therapists Shaun Howe and David Bridges. They provided a full and sound argument for nursing support, far better than my input, but here goes. You may not like this…

I bought my practice from a retiring practitioner in 1994. It was a two man NHS practice. I worked full time and my associate worked two days a week. I inherited a hygienist who worked two days a week. Having just left a practice as an associate where to my recall we had four hygienists (albeit mainly working privately) who each worked alone, I could see no reason to change the same arrangement at my practice….until….

In about 2010, I employed a newly-qualified dental therapist/dental hygienist, to replace an old knackered hygienist. When the new addition had therapy-related treatments in, she had nursing cover. When she was working as a hygienist, she didn’t. She worked well and initially didn’t experience any problems. We gave her 30 minutes per patient and yes, she WAS working under the NHS – as I stated above, I was a worrier and was concerned if I didn’t allow scaling treatment by a hygienist under the Nash, I would be struck off.

One day, I had a male patient in for an examination. He had seen the hygienist three months earlier. I asked him how he had gotten on with our new hygienist and he said: “Great. Nice norks!” 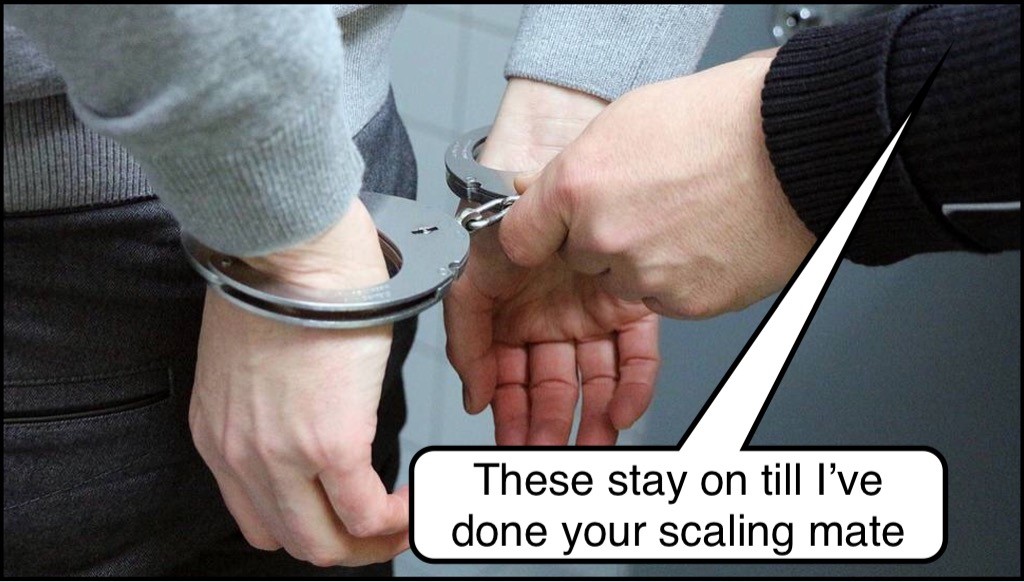 That was it for me. I felt that I had left a young woman potentially in danger from male patients by failing to provide a chaperone. From that point on, we increased our part-time nursing cover and the hygienist had permanent cover. The wage bill took a bit of a hit, but overall, the hygienist/therapist combo was still profitable (just), even though, being newly qualified, she was slow and was working under the (then) relatively new UDA system.

Over the last few months of my recent associateship at the corporate, I was paired up with a 17 year-old trainee dental nurse. She was a very pleasant girl and very competent, but she was VERY slow. Having personally been ‘investigated’ by the GDC (see previous blog) a few years previously, I was very uncomfortable every time my nurse left the surgery to put instruments through the decon or try and find scarce corporate materials, particularly if there was a female in the chair and I was doing a simple hand scaling. I was even more uncomfortable in being in control of R4, finishing my notes and completing the treatment and charging fields, particularly in the light of the practice having recently been picked up by the NHS Area Team for not ticking the correct boxes before submissions. As for the cross-infection rigmarole between patients – whoa! Me? 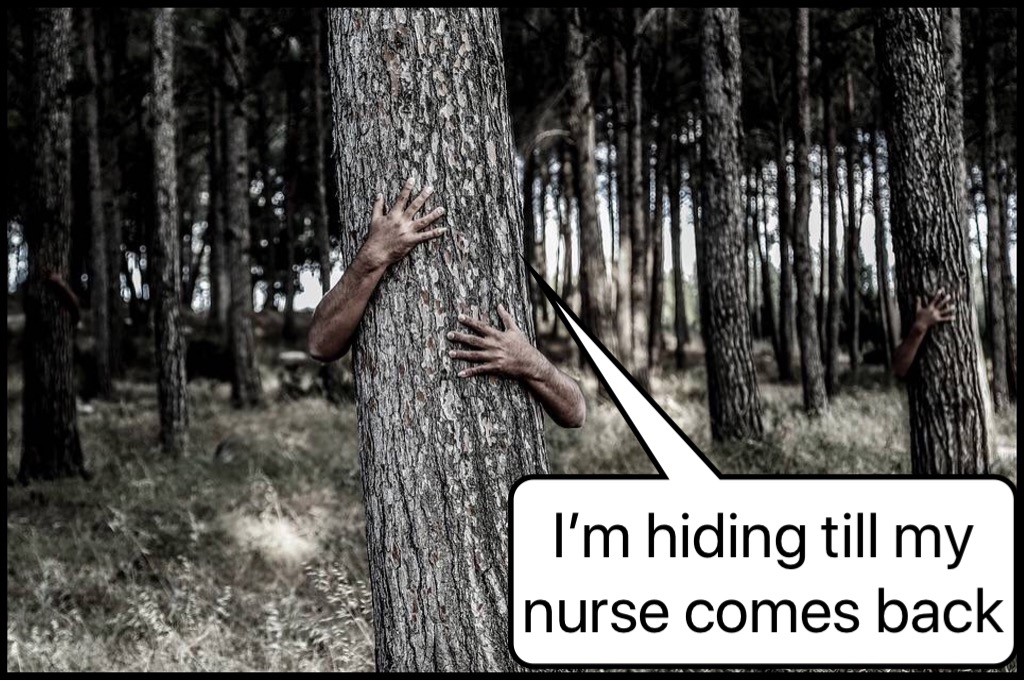 I don’t know how hygienists do it. Near the end of my career I feared litigation like I feared Lady Gaga and Bradley Cooper REALLY being an item. Like I daresay every dentist in the land, I was paranoid about missing out entries on patient notes, bearing in mind you now have to not only note what you did, but what you DIDN’T do. How does a hygienist absolutely ensure they do that, when they are battling against limited, time – doing the R4 thing, getting the patient out the surgery, cleaning around, setting up for the next patient, running to the decontamination room and trying to decipher the prescribing dentist’s treatment particularly since they work in the most litigious area of dentistry – periodontology? As my wife once said when beleaguered with household chores: “Why not stick the broom up me bum and I’ll sweep the floor as well.” 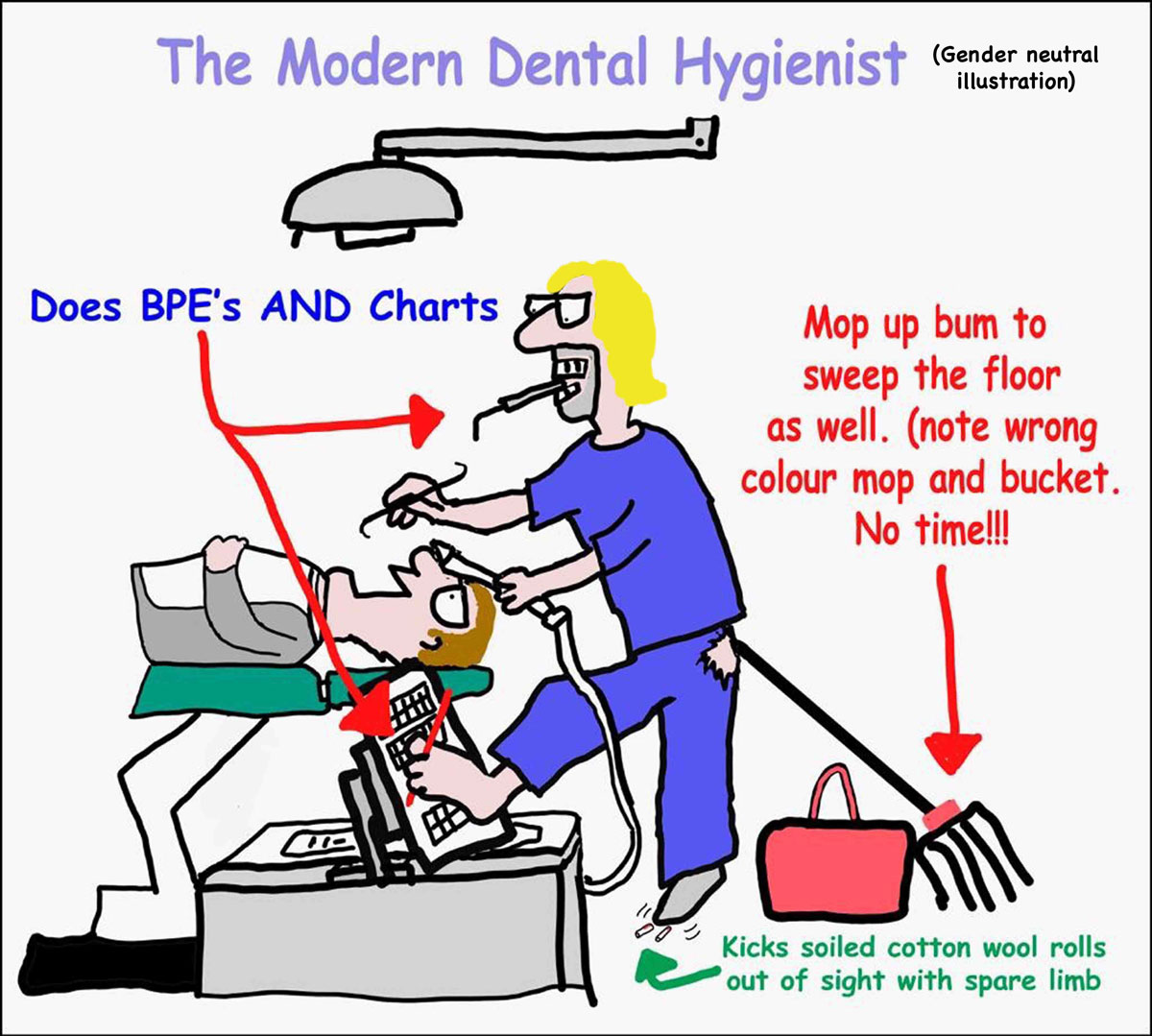 Mistakes are made. The GDC clearly states that practitioners should work with appropriately trained assistants and yet dental hygienists are apparently ok to work the aspirator, light cure after catching the etch off the 6’s and administer local. How many vasovagal episodes have you witnessed after delivering local anaesthetic? The hygienist’s job is to remove bits from the teeth. How many people have you had start to ‘choke’ on a bit of old filling, and YOU had a nurse aspirating?

To me, the value of the chaperoning element of a nurse being present cannot be emphasised enough. Not only can a nurse act as a witness to any negligent act on behalf of the hygienist, or inappropriate behaviour on behalf of the patient, they can also spot the bloody cotton-wool roll the hygienist didn’t spot while tearing round like a blue-a***d fly. Besides, the dental nurse is the expert in cross-infection control. I have no idea how to work the autoclave and wouldn’t have trusted myself not to slip up on optimal cross-infection control. My reason for providing permanent nursing cover was to protect the hygienist from inappropriate patient behaviour, but the risk of accusations of sexual misbehaviour towards patients from dental hygienists, especially since there are a good many male hygienists out there, I would consider to be high. Many many years ago, I was told off by a dental protection advisor for turning out very late one Saturday night to see a female patient without a chaperone. If they were worried about a male dentist seeing a patient without a chaperone in an emergency, why is it ok for a dental hygienist to see patients without a nurse as a matter of routine?

In our current dental situation, with litigation bouncing off the walls, it seems a no-brainer to ensure that all aspects of practice are watertight and impenetrable to attack by chancer patients and voracious solicitors, intent on grabbing the money the hygienist just brought in.

Anyway, I need to go and see a surgeon to remove this broom.

More posts from author
Monday, 10 August 2020 Now Where DID I Put That Enthusiasm?
Monday, 27 July 2020 What Dentistry Taught Me About People
Monday, 20 July 2020 Dentistry's Battle against Racism

Thanks, a change in culture is difficult but can be achieved if we have the support you have obviously shown. The BSDHT/BADT response will be published in the next BDJ in Practice due this week - protocol dictated that it could not be shared before this.

0
Thanks, a change in culture is difficult but can be achieved if we have the support you have obviously shown. The BSDHT/BADT response will be published in the next BDJ in Practice due this week - protocol dictated that it could not be shared before this.
Cancel Update Comment