How the GDC struck a Dentist off by mistake 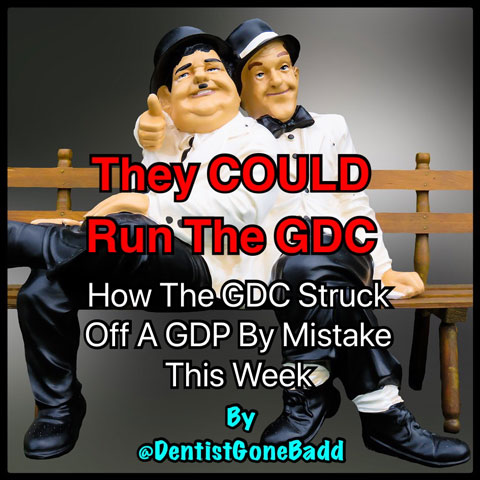 You Couldn’t Make It Up

(How The General Dental Council Fouled Up – BIG TIME)

Anyone who read my blog of a couple of weeks ago, which attempted to satirise the General Dental Council’s recent online opinion survey, will probably not be surprised by the alacrity with which I have jumped on the opportunity to outline the following episode, which beset an unfortunate general dental practitioner a few days ago.

The following events are true. The main action took place on Friday 12th October, 2018. The names of the “very professional” GDC employees have been withheld and the name of the protagonist has been changed. With a deferential nod of acknowledgement of the recent Royal Wedding, I will call the protagonist, who is very well known to me, Eugenie. I thank her profusely for granting me permission to relate her sorry tale to you.

Eugenie is a GDP currently working in general dental practice in a dental corporate. Her precise location she would like to also keep secret, but she describes it as ‘Moderately gentile, Middle Earth.’

Eugenie has been an NHS dental surgeon for 30 years and after a career as a full-time GDP, she decided earlier this year, to take early retirement and “escape the nightmare of NHS corporate dentistry.”

Eugenie being ‘exceptionally anally retentive’ (her words), she put in the appropriate pensions paperwork to the NHS Business Services Authority, informed her employer of her intentions and also the local NHS Area Team.

The latter irritated her somewhat, since she received communications twice from the Area Team, asking her if she was taking ‘24 hour retirement’ – her Area Team being unable to fully comprehend and understand the phrase “taking full retirement.” The Area Team also asked twice if she could confirm she had told her ‘employers’ of her intentions – the Area Team also failing to remember the concept of self-employed associates.

Being mindful that the GDC had taken over £900 quid off her earlier in the year for 12 months of exquisitely executed administrative services, Eugenie wanted to get her money’s worth and decided to retire on December 31st, 2018. Remember that date, it is important. That date was disseminated to all those that needed to know at the business end of dentistry, and she decided as a conscientious i-dotting and t-crossing individual, she would also inform the GDC of her desire to be removed from the General Dental Register on……come on, I told you to remember the date…yes, correct, the 31st December.

Ten days or so after submitting her letter, the GDC sent a form back to her via email, for ticking and signing and posting. Eugenie was surprised to find that she didn’t have the final say as to whether she could remove her name from the Dental Register. It was up to the GDC to decide if she had a valid reason to leave and the letter advised her that she would be informed of the GDC’s decision on whether to remove her name, in due course. Eugenie speculated that this was possibly to prevent someone in a spot of forthcoming bother, from removing his or her name before the GDC had the opportunity to strike them off themselves.

On the form, Eugenie was adamant that she made it clear she was removing her name due to retirement AND noted on the form, her desire for that procedure to be carried on after….come on…..anyone….31st December, 2018.

Skip forward to last Friday, 12th October. Eugenie was on an ‘early’ and by 9.45am had seen a bridge prep, a filling and two examination patients. It was the custom at the corporate practice Eugenie works at, for reception staff to hand letters to dentists at lunchtime, or earlier if the letter looked like it needed early attention. On Friday, the head receptionist handed Eugenie an unopened letter marked ‘General Dental Council.’ Eugenie nearly tossed it behind the computer monitor for later perusal, suspecting it was a letter confirming her removal at the end of the year. But something, fortunately, made her open it, because it was a letter from a ‘Registration Operations Officer, dated 10th October informing Eugenie that she had been removed from the Dental Register as from 9th October – TWO DAYS EARLIER. This mean that Eugenie had not only worked illegally as a dentist that day, but since the previous Tuesday. In other words, she had been, without her knowledge, breaking the law for four days, with, presumably, invalidated dental indemnity insurance. 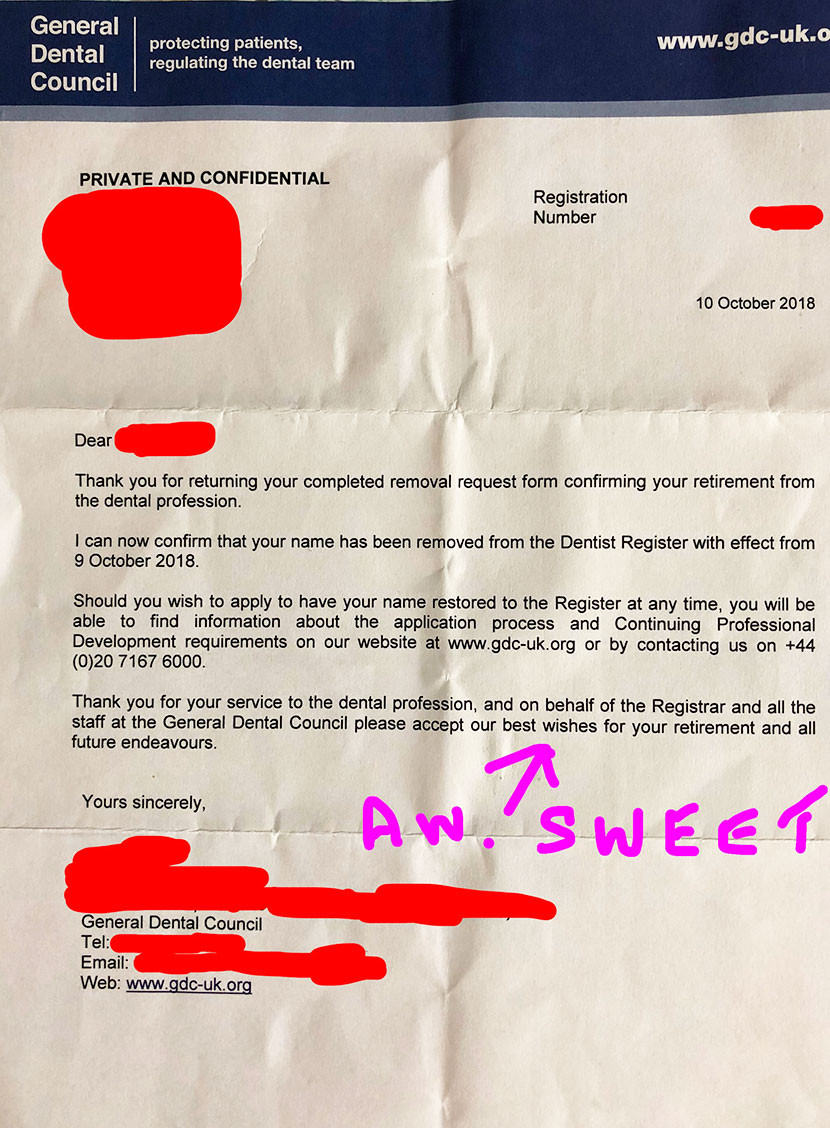 She was chilled to the bone when she looked at the GDC register online and found she definitely wasn’t registered.

The practice manager was called. Eugenie and the manager agreed that she had to stop work immediately and her day was cancelled. The next patient, sitting patiently outside her surgery was fortunately very nice about the fact that she had wasted a forty mile round-trip, and happily rebooked.

An understandably irritated Eugenie then rang the GDC and spoke to a ‘very nice lady’ who eventually told her that on neither Eugenie’s letter or returned form, had she informed the GDC of her retirement date. After Eugenie’s protestations that she knew she had put the date on both pieces of correspondence and following the GDC representatives’ ‘consultations with colleagues,’ the GDC lady apologised for the ‘mix up’ – she had apparently been ‘looking at another person’s letter’ when she had given the previous statement that there was no date on Eugenie’s correspondence. The GDC lady said that a member of the Registrations Team would ring her back.

After one hour, at 10.45am, there was no call and Eugenie rang again, this time speaking to an equally pleasant GDC worker. She couldn’t apparently raise the Registrations Team and so Eugenie left her with the chilling message “I’ll be back.”

At 11.45am, still no joy, but this time the original person Eugenie had spoken to, answered the phone. She said the Registrations team were at that very moment looking into the matter and would definitely be in touch in the afternoon. By this time, Eugenie had decided not to leave the practice until the GDC had telephoned on her mobile, not wanting to be caught out having to take a call in the car. She said she spent the whole morning whining to colleagues and swearing a lot, as well as threatening the Registrations people by email with ‘action’ if she was not reinstated immediately.

Around midday, a sheepish, very polite gentleman from the Registrations team telephoned Eugenie and apologised profusely for the mix-up and reassured her that she would be reinstated immediately and that her name would reappear on the register online, after midnight.

What confused Eugenie was that this particular Registrations officer gave her a totally different explanation as to why the mix-up had happened. The first GDC worker said that the wrong registrant’s application had been accessed initially, while this Registrations man was saying that while Eugenie’s first letter to the GDC clearly stated the date of deregistration had been seen and noted, a second registrations officer had processed the GDC form without seeing the original letter and that form did not state the date. To Eugenie’s recall, she did date the form, the need for the date being critically important.

On having an early finish on Friday, Eugenie fired off an email and recorded delivery letter to the GDC, asking for a scanned or hard copy of her returned form – a form they still had in their possession and had apparently accessed on Friday. This letter was mainly to check and reassure herself that she wasn’t actually going insane, so sure was she that she had put the date carefully on the form, which the GDC were adamant she hadn’t.

Eugenie checked online on Saturday morning and found that her name was back on the Dental Register.

One of the primary roles of the General Dental Council is to, (to quote the recent survey):

“Maintain(s) a register of dentists and dental care professionals, and check they meet requirements.”

I dunno, but I would have THOUGHT that if there was any ambiguity with regard to a dental professional’s intended removal, they would have double-checked with the practitioner. The GDC had responded to the original request for removal by sending the form to Eugenie, so surely that correspondence could have been looked at? After all, it is the most final act in a dental professional’s working life.

The other question regards the first GDC worker’s statement that she had been looking at another registrant’s letter! What???? Another letter on Eugenie’s file belonged to another registrant? I mean, GDPR and all that, surely???

I REALLY hope you all took the opportunity to fill in that survey, and if you did, you give them Hell when they start the telephone survey.

0
I'd have liked to give my views - But the the first question " Are you *Male * Female * Prefer not to say" I responded "Prefer not to say" and got the response that my "views were not what they were seeking this time" So the GDC are discriminating against those who prefer not to be classified by gender :o
Cancel Update Comment