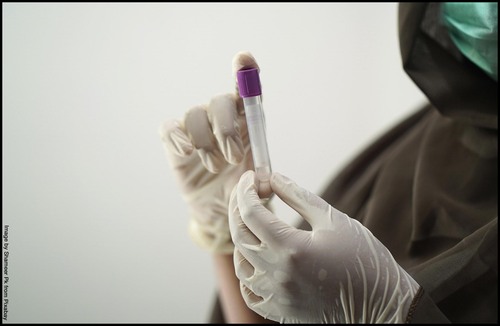 A newly-published study on the prevalence of SARS-CoV-2 antibodies in dental workers, has further clouded the true picture of infection risk in dental practice.

In June 2020, researchers at the University of Birmingham, took blood samples from 1,507 ‘dental care practitioners’ from the Midlands (which included dentists, dental nurses and dental hygienists), to measure their antibody status against SARS-Cov-2.

The team found that 16.3% of the volunteer participants from general dental practices had SARS-Cov-2 antibodies, compared to “Just 6% of the general population at the time.”

The study also found that dental practice receptionists, whom the University of Birmingham website said “Have no direct patient contact,” had antibodies comparable with the general population, at 6.3%.

The study, published in the Journal of Dental Research concluded “Finally, in this community-based cohort of over 1,500 individuals, we demonstrate that DCPs had a significant occupational risk of exposure to the SARS-CoV-2 virus prior to the closure of routine dentistry, which occurred on March 25, 2020 in England.”

However, it is not clear how the researchers came to the conclusion that the dental professionals were exposed to the SARS-Cov-2 virus occupationally, before the dental shutdown on March 23rd.

The Centres for Disease Control and Prevention (CDC) says that antibodies are formed from “1-3 weeks after the infection.”

It may therefore be possible, that some participants in the study may have been exposed to the coronavirus after the dental shutdown, bearing in mind that a number of dental professionals were seconded to other general roles within the health service to help out in the pandemic, before the return to ‘normal’ dental practice with enhanced PPE on June 8th 2020.

The conclusions drawn in the paper ‘COVID-19: Seroprevalence and Vaccine Responses in UK Dental Care Professionals,’  contrast with research recently reported on by GDPUK.

From the outbreak of the COVID-19 pandemic, there has been much focus on whether dental workers are more exposed to the risks of contracting  the SARS-Cov-2 virus due to the production of aerosols during some dental procedures.

GDPUK reported recently that researchers from Ohio State University found that wherever condensate from dental surgery aerosols had accumulated, it was the irrigant used as the coolants which contributed to most of the organisms found (78%) on surfaces such as face shields and patient bibs. Only 0.1%-1.2% of the microbes distributed around the surgery came from saliva.

In a study which involved 10% of the French dental workforce, it was found that  the prevalence of laboratory-confirmed COVID-19 was just 1.9% for dentists and 0.8% for dental assistants.

In a recent study of Scottish Healthcare workers, which included only 50 dentists, thirteen of them tested positive in blood tests, showing that they had been infected.

From that very small number of dentists included in the survey, researchers concluded that dentists had the highest seroprevalence rate of at 26%.

Iain Chapple is a co-corresponding author of the latest Midlands study and is  Professor of Periodontology at the University of Birmingham and Consultant in Restorative Dentistry at Birmingham Community Healthcare Trust.

He told the University of Birmingham website “Dental professionals are thought to be at high risk of exposure to SARS-CoV-2 because they routinely operate within patients’ aerodigestive tract and regularly carry out aerosol-generating procedures that result in the production of airborne particles.

“Through our research, we have clearly shown that dental professionals were at increased occupational risk of exposure to SARS-CoV-2 prior to the new PHE guidance on PPE. The occupational health measures that have been put in place in general dental practice as a consequence of COVID-19 appear to remove that increased risk, however, this will need to be thoroughly investigated to see if they have successfully interrupted transmission of SARS-CoV-2 and other respiratory viruses.”

What research is Prof Chapple referring to that "clearly" shows "dental professionals are at increased occupational risk of exposure to SARS-CoV-2 prior to the new PHE guidance on PPE"???
0