Contract Reform – with a dash of history and art 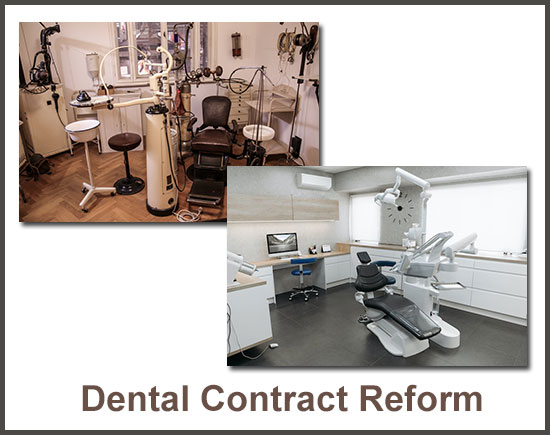 Contract reform is on the agenda again – or maybe it never left. A recent paper in the BDJ from Rebecca Harris and Rachel Foskett-Tharby of NHS England describes the problem of the current dental contract as ‘wicked’ or ‘stubborn.’

‘Wicked’ or ‘stubborn’ are apparently technical terms for the problems have ‘contradictory and changing requirements; are hard to define and solve because different stakeholders see the problem differently; and there are usually no clear solutions.’ Problems become ‘super wicked’ or presumably ‘super-stubborn’ when time is running out to solve the problem. Despite time apparently running out to reform the current contract, they argue for slow and steady change.

What might history show us about solving the problem? In 1945, as the 2nd World War ended and the universalist promises of the NHS for dentistry were being developed, Mr CW Pimlott of Newbury wrote to the BDJ, defining the problem as he saw it. There are 3 methods of remuneration possible for a dental service available to the whole population, namely

Under a scale of fees, he writes, the largest incomes go to the fastest operators. Discount this system, he says, because dental practice will never advance beyond ‘repair and replace’.  Paying a salary would involve the ‘supersession’ of existing practices. Capitation however favours minimum operative treatment and favours prevention. The largest income goes to those who keep the maximum number of mouths in health.

Squadron Leader Brown disagreed. There should be a fixed basic itemised fee list which would cover core expenses and this would be topped up by additional fees decided by the practitioner’s skills and experience levels, the need to attract dentists to high needs area or where the cost of living in an area was particularly high.

The British Dental Association had another solution.  Full page advertisements in the BDJ quoted the Lord Rosebery, saying in Parliament that grant-in-aid was the solution because a fixed fee scale gave the dentist ‘no incentive to improve either themselves or their amenities.’ Grant-in-aid, as practised in New Zealand, meant that the patient paid the dentist’s charge and the patient then recovered a fixed fee from the government. If the patient chose to attend a dentist who charged more than the fixed government rate, then the patient is responsible for the balance.

Despite all the other objections and ideas, the government, as we know, went down the fee per item route and Mr Pimlott called it right – the largest fees went to the fastest and by 1951, dentists had overperformed so much that the costs to the government exploded and patient charges were introduced.

Lord Rosebery was wrong, though. Fee per item did not prevent dentists from improving their amenities. Advertisements for jobs in dental practice since 1948 have shown that dentists grasped with open arms the opportunities of low seat dentistry, high volume aspiration, new materials and putting in that extra surgery. Much of that, up to 2006 and the introduction of the UDA contract, happened under an NHS fee per item system. The dangers of any cash limited contract, if the NHS is the sole source of practice income, is that there is no money for development and innovation.

This year, King and Charlwood, in discounting the arguments of NHSE put forward by Harris and Foskett-Tharby for slow, steady change to the wicked UDAs, argue for the urgent introduction of a capitation-based system of remuneration, fully supervised to prevent neglect, in order to encourage a preventive approach to oral healthcare.

History shows us then that, for the past 70 odd years, just like the rotating rosehead bur in your slow speed handpiece, clagging up with squishy carious dentine, what goes around comes around.

A paper published recently about contract reform in Wales took an arts-based approach to discern the thinking of practitioners. Supplementary to an interview study, 5 participants were asked to place a selection of random objects (objets trouvés, in the arts jargon) on a board, centring the object which represented their priorities and placing others of lesser importance around the periphery. Two boards were used, one defined as ‘current contract reform, the other as ‘ideal contract reform.’ Such visual representations of ideas and ideals reveal priorities not found in verbal interviews.

An associate, for instance, on the ‘current’ board centred a die for uncertainty and a toy soldier for the stamina needed to soldier on.  On the ideal board, he placed a tortoise in the centre, to indicate a desire to slow down and spend more time with patients. A model house represented security and safety. On the other hand, for a practice owner, the model house represented funding issues and budgetary pressures.

The authors argue that this visual representation of ideas releases emotions which might not be apparent in an interviewing process. One practice owner opened up about the difficulties of meeting targets, recruiting staff and a lack of support.

Multiple suggestions for an NHS dental contract have been made over the past 75 years. Probably none are ideal neither from the government’s point of view, nor from the dentists’. One thing is certain. History shows that dentists will never agree amongst themselves about the best way forward with regard to their relationship with the NHS.

There may be another certainty. Dentists will protect their investment in their practices above all else. They need certainty of income streams, the ability to budget, to invest in new materials and techniques, to recruit and retain staff and to manage their own time to stay afloat and protect their sanity. If that certainty is not available from the NHS, they will (and are) leaving for the (slightly?) greener pastures of private capitation and fee per item.

All of that to say and sadly I’ve run out of words to mention of the person who should ideally be at the centre of the board ……. the patient.

Tweet
Tags:
contract reform Dentistry Dental GDPUK.com
What’s in store for dental practices, through the ...
Dentistry – are there more opportunities in dentis...