All that's new in the world of dentistry
MAR
14
0 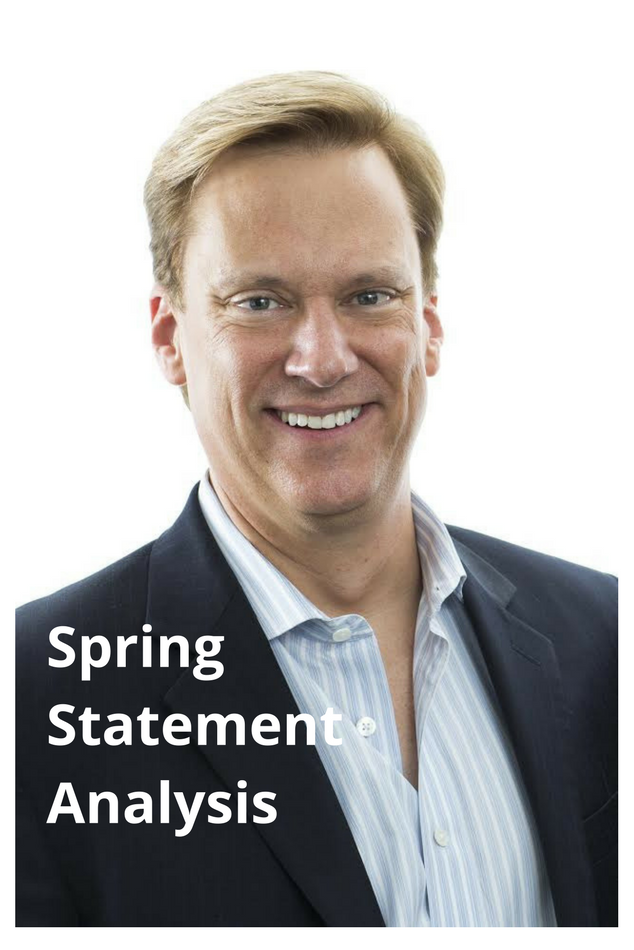 Michael Lansdell is a founding partner of specialist dental and medical accountants Lansdell & Rose and a chartered accountant. Here, he gives an overview of Philip Hammond’s first Spring Statement, and the key points for dental practice owners…

We had two Budgets and three Financial Bills in 2017, which for many, was more than enough! The Spring Statement lasted a grand total of 25 minutes, and was essentially a review of the public finances. It was also an opportunity to publish consultations before any announcements in the Autumn Budget.

So, nothing headline grabbing, but here’s a glance over the Spring Statement and how it may relate to your business.

From April, the VAT threshold will remain at £85,000 for the next two years, as per a previous announcement. Mr Hammond said he would consult on whether growth could be incentivised by looking again at how VAT is structured.

Payments/settlements systems (including the Bank of England’s) are to be renewed in order to harness the power of the latest technologies. The government pledged its support to these changes, and it will be consulting on them.

On a related note, views will also be sought on how online platforms could help users comply with their tax obligations.

If an individual now owns less than 5 per cent interest in a company, because the company has issued trade to raise capital, they should be able to claim Entrepreneur’s relief, says the government.

Views had previously been sought on this topic. It was announced that the first of more frequent, three-yearly revaluations for business properties would be in 2021.

Have you – or a colleague – undertaken this? Well, the government is going to look at how tax relief can be extended and how the system can be both simplified and protected from misuse.

Coming up in April…

No new tax measures were introduced, but some previously announced changes are coming into force in April. The personal allowance is rising to £11,850 (for basic rate, to £34,000 and higher rate, £46,350). This excludes Scotland, who will have five new tax bands for 2018/19. If you are on a higher rate in Scotland, this isn’t great news as the threshold is going to start at £2,920 below the rest of the UK. As previously announced, the dividend tax allowance will be reduced to £2,000.

The national insurance contributions (NICs) threshold is also increasing by 3 per cent and Class 2 NICs will now be phased out for 2019/20.

If you have a company car, tax will rise for all by the highest emission vehicles.

The residence nil rate band for Inheritance tax (IHT) will rise; the main rate band will remain unchanged. There could be changes afoot by the Autumn Budget, however, a review of IHT conducted by the Office of Tax Simplification is due to report around then.

As for pensions, the minimum contributions for workplace pensions under automatic enrolment will increase. The lifetime allowance will rise in line with inflation (it’s been on a downward path since 2012).

Finally, both income tax and NICs will apply on all payments in lieu of notice (PILONs) in 2018/9.

If you want specific data, or clarification, contact Lansdell & Rose. We can help your practice to stay ticking away efficiently and profitably during the next financial year and beyond.

The Big Bad Budget - With the new tax year looming

With the new tax year looming, it is important to re-examine how the latest Budget – the first Conservative Budget for 19 years – will affect the dental profession. Having had time to evaluate the pending changes, it seems that dividend taxation could have the largest impact, especially those drawing dividends from their own limited company.

As dividends from UK shares are currently paid for with a 10% tax credit, previous years have presented incorporations with opportunities for reducing tax. From 2016, however, all dividend income will be treated as untaxed income and the current system will be replaced with a tax-free dividend allowance of £5,000 with higher taxes on income above that. What this ultimately means, is that practices will see a 7.5% increase in tax on any dividend income above the £5,000 tax-free allowance.

Although this is an aspect that will undeniably affect incorporated practices and their overall income, for those considering the decision to incorporate in the future, it could be pertinent to seek out professional financial advice to determine if it is the right decision to make.

In regards to dividend income received on Stocks and Shares ISAs and private pensions, however, thanks to the 1997 Budget, there will be no tax consequences introduced. This is good news for private pension protection, especially as tax relief claims will shortly be changing from £40,000 to £10,000 for dentists with incomes over £150,000 per annum.

The changes to employment allowance, income tax and inheritance tax are much more promising. Indeed, as from April, the employment allowance will be increased from £2,000 to £3,000 for all private practices. With the additional increase of the income tax higher rate threshold from £42,385 to £43,000, the Budget does present potential benefits to practices and dentists alike.

This is especially true where inheritance tax (IHT) applies. With the transferable main residence allowance set to gradually increase from £100,000 in April 2017 to £175,000 per person by 2020/21, this may prove to be a comforting thought for dentists and their families who have concerns about the effects of the Budget.

All in all, the Budget has revealed some interesting changes. While George Osborne and his fellow Conservatives expect to see public finances run at a surplus from as early as 2019, it would be prudent for all practices and dentists to stay cautious of what the future holds. Ultimately, until the changes take full effect it is uncertain what financial downfalls and benefits may occur, which means for now, preparation and calculation are very much advised.  If you are unsure of how the Budget affects you, contact money4dentists today.

The majority of earnings are likely to be paid out of the company via dividends. Currently, UK dividends are paid with a notional 10 per cent tax credit; as of April 2016, the dividend tax credit is being scrapped and replaced with a tax-free dividend allowance of £5,000 per year for each shareholder. Additionally, the income tax attributable to dividends is increasing by 7.5 per cent within each income tax band, including the basic rate band – which was previously tax free.

Hayley Hudson ACA, Manager for PFM Townends LLP, says: “There are a number of beneficial reasons to incorporate as part of a tax planning scheme, however, there are many factors to consider. Incorporation should be analysed on a case-by-case basis to ensure it is indeed the best course of action.

“At PFM Townends we always proactively discuss all the advantages and disadvantages with our clients.”