All that's new in the world of dentistry
AUG
17
0

That'll Do Nicely by @DentistGoneBadd 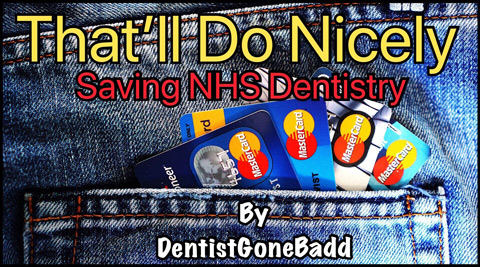 Well, what do YOU think would help the NHS General Dental Service Survive? A It More Posh Would Be Nice - Saving The NHS by @DentistGoneBadd 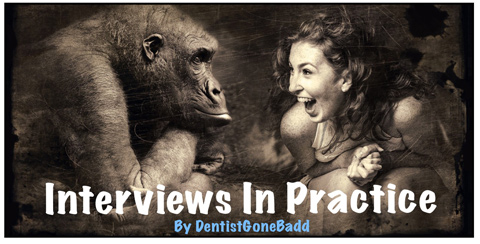 I was initially quite scathing of the Tory Leadership selection process, but when I looked back critically at the way that I chose members of practice staff, I thought better of it. "You'll Do" How NOT To Choose Practice Staff By @DentistGoneBadd

What can Challenge do?

What can CHALLENGE do?

Any new system must concentrate its efforts on delivering –

·         Improved oral health for the population as a whole

·         An oral care system that patients understand and can trust

These are the simple but important features of a successful contractual arrangement between the dental profession and the Government.

In addition, CHALLENGE would say that the following issues are just as important -

·         A system in which the NHS and non-NHS system work in combination, not in opposition

Whatever emerges from the discussions between the profession and the NHS must be able to demonstrate that it has matched these issues with due sensitivity to the needs of both sides. Both sides need to recognise the need for fiscal control and integrity and both sides need to understand that if high clinical standards are required then the funding has to be there to support those standards.

Chief Dental Officer for England issues a ‘Call to Action’ to the dental profession to help find workable solutions to the contractual problems that have beset the NHS general dental service since the introduction of the last set of contractual changes in 2006.

You’re a bit late getting to the party, Barry, but now you are here you will be pleased to know that your old adversaries CHALLENGE have been resurrected and are looking forward to joining a robust debate alongside you.

Barry, you will remember, but for those who are too young to recall, CHALLENGE was a political pressure group set up in the wake of the 2006 contract debacle. They argued long and strong for major changes early in the life of the new contracts. They even made a significant appearance in front of a Parliamentary Health Select Committee back in 2008. The three founder members were Eddie Crouch, John Renshaw and Ian Gordon. These are well known names with a long track record of standing up for GDPs in the one-sided battle with the Department of Health. The same three professional leaders are still the face of CHALLENGE.

The call for action from the CDO provides us dentists with quite an intriguing headline, especially coming from one of the most obdurate supporters of the status quo. Barry Cockcroft comes to the vexatious arguments over the way the NHS GDS and its various contractual formats work for patients and for dentists after telling anyone who would listen - for years on end - that the service is in great shape and patients are deliriously happy with the way they are treated.

Well, if Barry wants to hear from the profession, CHALLENGE is willing to take up the cudgels once again to promote and articulate the message we hear coming from all the GDPs we listen to on a regular basis. In the near future we will be running our own listening exercise to gather up data on how you see the contract and how you feel you have fared in the eight years since it began. We also need to know your concerns about the pilots being run at the moment and the possible shape of a new service that may emerge.

If we as a profession are to make any real impact other than making a lot of noise and blowing out a lot of hot air, we need your input to validate what we are saying. When that chance comes along please take the few moments it will require to put down, for our benefit and for the benefit of all your colleagues, exactly how you feel about the situation you find yourself in.

If Barry wants action, CHALLENGE says let’s give it to him!!

Start a Revolution - in writing, if you please ... 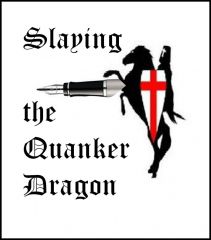 Come the revolution, my father used to say, some group of ne’er do wells would be the first to feel the pointy end of his sword.  I am left wondering if this advice is as pertinent as ever.

In a week that the CQC almost imploded we now have three examples of groups for whom professional respect runs low.  Low – pah! If only our respect was THAT high! It’s more the unfairness of it all: we do our job and they simply  don’t do theirs.

In dentistry, all we are asked is to do the job. Whether it be the check up, the filling, the root canal or the moistening of nervous brows – we just get on and do it – in arguably the most efficient health care delivery model around – namely the small practice.

IT'S NOT DIFFICULT  we all think - actually - since there are so many incompetents around, maybe we should start by recognising how good we are doing a very demanding job. Back to revolutionary thoughts ...

Firstly there is the dreadful CQC.  Moving aside the argument of whether they achieve anything toward patient safety, this last week has seen both previous and current senior management trying to bury the Morcambe Bay truth about incompetence, incompetently. They were saved only by the Metropolitan Police ringing the Stephen Lawrence bell.

Next up the gallows are those at hospital level who invented Triage Referrals – all we want is for Mrs Grumbles and her nasty wisdom tooth to be seen to get the bloody thing out safely.  Now the forms have to be the latest version, and every box ticked in a remake of that 1970’s film noire  The Ultimate Quanker Revenge. Only one “tick” need be “a cross” by mistake and voilà! You have helped the hospital meet their waiting targets.  How magnanimous of you all …

Finally and worryingly Madame la G awaits NHS England.  The stories of what is happening with Local Area Teams and the slow moving nature of this organisation give little confidence. When you consider what has happened to LDC Levies, allied to the fact that the new contract will likely be finalised by this already seemingly incompetent body - don’t even mention the seniority payment scandal [also known as THEFT, Minister] - we all have good reason for “CONFIDENCE Zero” – an organisation free from all useful contents! Dentistry risks, once again, being cut out of the healthcare planning loop.

The NHS Changes on 1st April it appears  served simply to shut all the PCT offices, reopen some new ones [at your expense] while many of the old guard simply ported their redundancy payment & employment to the new organisation, around the corner in its new offices with its new water machine and new coffee facility. A change of biscuit was no doubt also essential. These doors were revolving so fast that Superman would have struggled to keep up.

The only consistent cause factor has to be the politicians.  We need to rise up ladies and gentlemen. Our MP’s need to be attacked eruditely and daily by a vociferous professional demand.

Enough is enough and this has to stop.

The summer is a great time because that’s when they go away. But we must believe that in this revolution, the pen IS mightier than the sword.

It is YOUR politicians who have created these organisations and undue authority to act with ALL power and NO responsibility. Their purpose is solely to deflect responsibility from Westminster.

It has to stop. I don’t know about you lot but for me, the time for professional revolution is fast  approaching.  Where's my pen?

Are you reading Lord Howe? [2]

After an urgent motion on Friday 7th June at the Annual Conference of Local Dental Committees about bullying by NHS Bodies was passed with an overwhelming majority, Minister of Health Lord Howe stated that this form of pressure was wrong. We now learn that the unreasonable over-priced invoices foisted on dental practices by the CQC are now being enforced in advance of the due date by over-zealous credit controllers working for NHS.

One practitioner has contacted GDPUK having been chased for payment several days before it was due. The email in question stated that the credit controller knew the dentist was on holiday, but wanted assurances that the invoice would be settled by during this holiday period. And the invoice is not even due yet!

GDPUK readers were recently informed that an over-keen CQC inspector wanted to see a log of items kept in the staff room fridge, the sort of fridge that contains two yoghurts, a salad and a couple of sandwiches. Does any politician, or the CQC itself, feel dentists and their teams should be keeping this sort of record? It's the sort of thing that might get a weak laugh on a BBC3 sitcom, but this is how modern professional people in the UK are hounded.

Our medical colleagues face lower bills for the same unwanted inspections, starting this year. Dentistry should not have to put up with this, and both professions should be charged the same lower fee, or no fee at all. These inspections are demanded by the all encompassing Health and Social Care Act, the professions certainly did not ask for this Act, nor for the ridiculous costs and demands associated with implementing it.

Will profession have to face more uncertainty?

Posted by Tony Jacobs
in  Tony Jacobs
MP Jamie Reed put his foot in his mouth this week when asked about a Parliamentary question. His comment suggested he thought that patients can register with an NHS dentist in England, when this registration concept and payment for registration was removed by a Labour Government in 2006 when the present GDS contract was imposed on the profession and patients.
Continue reading
28825 Hits
Tags:
Government Healthcare Dental education dental opinion dentistry opinion Forum GDPUK Dentistry Dental GDPUK.com
Tweet
28825 Hits
MAR
20
0


Any one who casts an eye around the virtual dental world will sense that the heat of practice is growing. A junior colleague on another site is struggling to understand how he interacts with his colleagues and whether a whistle needs to be blown. The argument for and against the benefits of CDT based denture treatments seems to have pricked a conscience or two. And now we have an interesting discussion emerging about the idea of private gaming.

It seems that whether you are trying to make the NHS work in day to day practice or are in patient-funded private practice, there is a wide range of opinion about any circumstance - clinical or administrative. Those of you of a confident age value that very opportunity to be 'individual'.

It has always been difficult for dentists to be consistent in their approaches and their activities. But suddenly it seems that the width of the zone of acceptable opinion may be narrowing. Are we witnessing a profession wide loss of tolerance?

Perhaps the unexpected outcome of a long recession , regulatory changes by the truck load, and an uncertain Government commitment, allied to the perverse certainty of uncertain but major change, is that we have all become a bit too twitchy - in planning our self-defence, maybe the trigger is a little too light. A word or warning to all, though: there is a fine line between a healthy difference of opinion and infighting. And we all suspect we know which way the Government would like things to develope, so that they can slide though their changes of choice.

Calm down dears, its good to differ. But let's remain allied in professional friendship and mutual respect.