All that's new in the world of dentistry
SEP
18
1 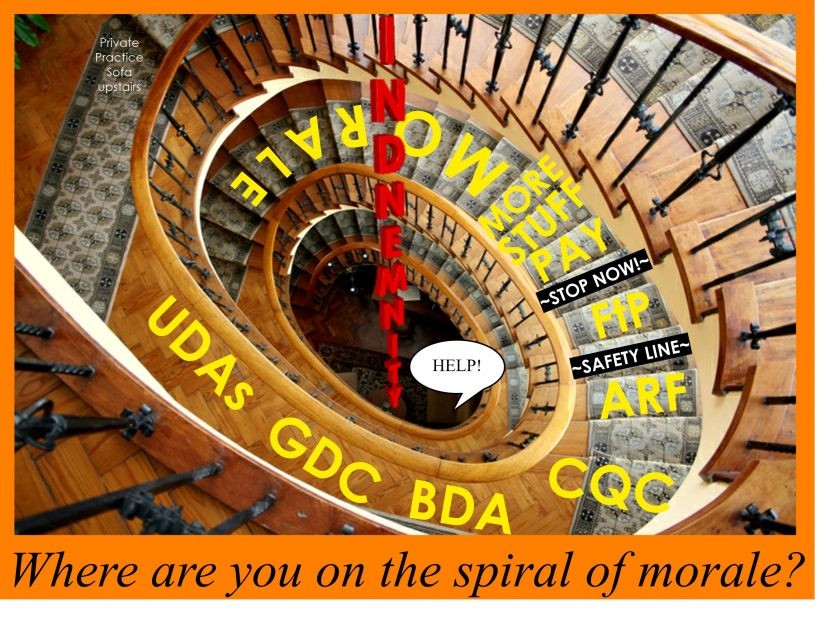 Welcome back to the Indian Summer of tropical rain…

There was a time when those of use of a certain age [OK Old if you will, but take that tone out of your voice!] decided to pursue dentistry for many reasons one of which was the life time career of care which happened to be comfortably paid.  Professional life was stable, practice management was an ongoing process. Interestingly by and large we saw all the patients who wanted to be seen and managed their dental needs without any political calls for damage limitation of a crisis of “Access”. Those of us so inclined went home for a celebratory glass of cheap Chateau Rinse de Bouche over an FP17. [For those of our younger colleagues unfamiliar with such things, these were the old claim forms that allowed a course of treatment to be ‘claimed’]

Complaints were rare. The GDC were a body to whom one looked up in awe and respect, and yet who played little part in day to day practice. Indemnity was low cost as was the ARF.  At some point in one’s career one would make the decision to up the standards of ones work and seek to change the way one practiced. It was a cycle of professional life.

Meetings [long before CPD became a fashion statement] were a cacophony of chit chat about practice matters.

Morale I would be so bold as to say was always, broadly, high

So what on earth has happened? How do we find ourselves at the edge of a perfect storm of change for the worse?

The GDC are a runaway train of high cost complaints handling and we are all paying through the nose and other orifices too, I should think.  The persistent arrogance and lack of accountability of the GDC and its leadership remain a real cause for concern.  A worry in part because they affect us but we do seem to be able to affect them, nor can the PSA, it seems.

Just look at Indemnity as an example. On the one hand it is a significant chunk of income on an annual basis, now being compulsory [so the lawyers can REALLY get their teeth into you]. On the other hand, despite reassurances, there is a pervasive sensation that they will dig you out of a shallow pit of excrement, but if you are truly up to your neck they may simply leave you to flounder. A worry in part because they affect us but we cannot affect them.

Now we have news of the falling away of dentist incomes.  In a separate and apposite piece of Government news, even that respected statistical body HSCIC, thinks morale is a worry amongst dentists. Now incomes falling is hardly news because most of us have noticed this in the last 5 years.  How? Well, we run these efficient Micro-Businesses, Minister and produce the annual accounts.

Practice Plan’s latest Confidence Monitor is hardly an advert for happy campers under the Governments clinical cosh that is the UDA.  The vast majority of the NHS dependent sector must be feeling very uneasy.

What has caused this change of circumstance?  Why are all the pointers suddenly running the wrong way?  If morale is a precarious state of mind, all this news must surely cause the spiral of decline to turn more quickly unless something is done?

Now hold on Dr Prism … Dentists are a resilient bunch – we get by, we generally don’t moan, and we take the rough with the smooth because, let’s face it, there are many worse off than us and despite what the Daily Fail et al may say, we do have a social conscience.

In our day to day work, we [you me and all the other GDPs] take personal responsibility for our situation. It is up to us to be happy … or not as the case may be.  It is up to us to run our businesses. All good so far.

But for the bigger external problems we rely upon an external body to do our work for us.  We reply upon our Academic colleagues to lay out the ground for evidence based clinical practice. Not some random bunch of Red Braces in Wimpole Street who would not know a dental practice if it hit them on the head! We rely upon a representative body to keep the bad news at bay – to fight off the bad guys as it were.

Where are the BDA as our ‘Union’?

Perhaps they themselves experiencing a decline in morale as time and again they fail to make an impact against the onslaught of Government regulation and initiative?  Not so long ago there was the change of subscription system and I seem to recall there was a ‘bit of a fuss’.  Even on a professional matter such as obesity and the sugar debate, it was the medical fraternity that snatched the victory, and the BDA were left to issue a “told you so” PR statement which barely caused a public ripple.

Perhaps the lesson of influence here was that we need strategic alliances to amplify our voice and our influence.

Why is the BDA so effective on so many levels of “back office” matters and yet on the “Front Line” of headline influence and involvement, it is abjectly falling short. Why is it that as a body of 20000 dentists, they are neither first to be thought of in the media domain nor are they regarded with respect by our political masters?

Incomes … the UDA system …  the Prototypes … the CQC … the GDC and its quisling Dental members …  the GDC and it expansionist ambitions … FtP … more FtP … Professional Morale  … a vision for UK dental care …  Children’s Dental Health … Young dentists and early training...  Planning for Tiers ...   the list goes on where as members [and non-members] we cry out for some serious bloody Bolshiness – and time and again we feel they fall short. Too busy having ‘polite meetings’? You might say that, but I could not possibly comment.

By and large of course those who are in private practice are able to manage their lives and rise above the challenges of NHS practice.  This indeed is reflected in the consistent theme of the HSCIC, Practice Plan and others: their findings relate to NHS practice

So if the NHS GDP is the poor bloody infantry, who are their Generals?

Well certainly not the new CDO, ironically Colonel [Retired], who is happy to discuss the present and future problems on the same stage as the very man who was their architect, now relishing his role as a non–exec director for a leading Corporate.

The sign of poor morale in an organisation can be its collective ineffectiveness of leadership.

Perhaps the problem of spiralling morale in GDPs is in part due to a perception of low morale at the BDA?

For sure as profession we need a dose of Feelgood Salts and a good kick where it hurts.

The season is underway.

The BDA need to start scoring some goals.

It’s not like the ball is not in the open, and for sure the net is wide open.  The NHS GDP needs its leaders, its “Generals”, to start doing more than limply waving a PR flag.  I suspect members would prefer one action over the hundred words of a glossy Press Release.

Can it really be a year since we and the BDA all went up in arms over the ARF change?  A fine campaign of action but has 2015 seen it followed through?…  It’s a sad reflection that, as no doubt predicted by Madame Gilvarry and Dr Moyes, the ARF is now seen as small beer – have you looked at your Indemnity bill?

Get a grip BDA.

Start earning your members fees.  Before a large part of the profession withers under your watchful gaze.

The signs are out there. How many more hints do you need?