One working day in April 2018, precisely at 4.50pm, ten minutes before the unseemly scramble by the dentists to get out the door to avoid the dry-retching of the nurse’s as they clean the filters out, I was presented with a sheet of paper.

A nurse delivered the A4 sheet with a flourish and the warning that our corporate practice manager required my signature before five, since she was going away for a few days.

I certainly hadn’t completed the in-house training in question personally and definitely hadn’t noticed a facilitated practice discussion, unless I missed it because I was engrossed in Facebook at the time, doing a fun quiz on ‘is your line manager a homicidal psychopath?’ (My answers were probably of great value to Cambridge Analytica and the ‘Leave’ campaign).

More interestingly, three of my colleagues hadn’t even been employed by the corporate around the date mentioned and I figured that two of them couldn’t possibly have done the training since they are new trainees, though they MAY have read the policy during induction. One of them admitted they had only signed the policy sheet “To avoid a lot of hassle.”

I dismissed the nurse with an “I can’t sign it since I haven’t done the training,” to be met a few minutes later by a text from the head nurse with a link to a video on, presumably, needlestick injuries.

The upshot was that I actually went online and found the subject on the website of a training organization I occasionally use, and produced a CPD certificate before six and signed the form anyway.

Yup, I wimped out rather than be met with the ‘I’ve Been Bagging Angry Wasps Into A Sack With My Bare Hands Face’ of my corporate practice manager.

Of course, the nub of the above was that someone in management (I don’t know at what level) had fouled up and had realised that CQC requirements had not been met. In order to meet requirements, staff had been browbeaten into fraudulently signing a statement that would give the authorities the impression the company was complying with regulations.


And the reason I have outlined the above?

At this time of year, independent dental providers are bidding for contracts against the corporates and increasingly, they are being undercut by the latter, who use their low wage, high trainee workforce ratio and dubious interpretation of NHS regulations to undercut independent practices.

NHS commissioners are desperate people. They need to secure services at the lowest possible rate and the corporates present them with exactly what they need to satisfy the number-crunchers at the Department of Health - high numbers at low prices. To quote from a popular 70’s sitcom, “Never Mind The Quality, Feel The Width.”

It’s a subtle form of bullying, but it’s bullying nonetheless. The Independent practices cannot possibly hope to compete on an equal footing with companies that run their practices on trainee nurses and (largely) EU dentists willing to work for £8 to £9 per UDA until Brexit is put into effect.

It’s the equivalent of being elbowed in the face by the school thug as he pushed into the lunch queue.

I have worked for a corporate for over five years after selling my own practice, and during that time we have had a huge turnover of nursing staff. As nurses qualify, they leave within months for the independent sector - not once has a qualified nurse been replaced with a qualified nurse. The company just takes on another trainee, and often the £9-per-UDA associate finds him/herself providing the in-surgery training.

The playing field is definitely not level. Low quality materials, poorly maintained equipment and restrictions on which laboratories can be used all contribute to the ‘Poundstretcher’ mentality. At one point last year, we had absolutely no x-ray facilities while head office sourced the cheapest scanner possible.

Unfortunately the commissioning Area NHS Teams are either oblivious to what is happening in the corporates, or are turning a blind eye. And by no means is my corporate the worst offender - I’ve seen worse with my own eyes. As corporates go, mine is considered to be one of the ‘good guys.’

So what is to be done? Your guess is as good as, although I would LOVE to see widespread and coordinated unannounced CQC inspections nationwide at 9.00am. Or else a mass walkout of the Nash by the independents? The corporates definitely wouldn’t cope - few of them hit their contracts annually anyway.

As for me, I’m off to Poundland.

Six years ago, I attended a two-day residential course. It was a CPD course I hasten to add, not the usual anger management or ‘appropriate behaviour in the workplace’ type of thing I used to have to attend before they found the right tablets for me.

Anyway, it was very interesting, although I freely admit I never put a single thing I learned into practice – mainly because the dental corporate I work for wouldn’t shell out for the equipment I needed unless I could produce a business plan that proved I could earn them at least a tenner for every quid they invested. But that is by the by.

On the evening of the first day (a Friday if I recall correctly), the ten participants plus the lecturer and two representatives of the sponsoring company, enjoyed a meal in the hotel where the course was being held. After a very pleasant starter and main course, I moved to where a gaggle of four youthful dentists were sitting and enquired as to where they were in terms of their careers. It transpired that all four had graduated from the same Northern dental school and had all been qualified roughly two years. They were all general dental practitioners and had all taken up associateships in NHS practices.

As the most experienced dentist on the course – actually, why mince words, the oldest – I was interested to see if the youngsters were enjoying their chosen profession so far. I think I was trying to vicariously re-establish myself with my early enthusiasm for dentistry.

I posed, what I felt, was a fairly innocuous question to the group:

One female dentist confessed that she cried every night when she arrived home from work, and sometimes did it during surgery sessions. One of the males said he was so anxious about work that he threw up most mornings and that brushing the lingual aspects of his teeth was impossible, while the other female said she had trouble sleeping and had been put on antidepressants six months earlier.

Perhaps the most troubling response was from the other male, who confessed that he had on a number of occasions, thought of ‘ending it,’ having realised that he had made a dreadful mistake in going into dentistry, and couldn’t see any way out. My concern for him diminished a little when I saw that he had an incredibly healthy appetite, demolishing his own rhubarb crumble and a female colleague’s lemon sorbet in less than three minutes.

When I questioned them more closely, the reason for their universal despair was not down to the pursuit of ridiculous UDA targets or the student debts they were saddled with, but the fear of dental litigation.

All four were constantly worried that they would see their careers end either in a GDC meeting, or more likely, through the bad publicity and financial ruin brought about as a result of a civil action facilitated by a dental litigation firm. They felt that the chances of those events happening to them were high, since one of their fellow students had already found himself in the middle of litigation as a result of an NHS root-filling having not worked.

Now that was six years ago, and I would argue that since then, the UK dental profession has slipped into a febrile anxiety that I have never previously witnessed in the 30 years or so that I have been working in dentistry.

Never have I seen dental colleagues (and even strangers) so jaded and so preoccupied with fears of dental complaints and ‘the dreaded letter’ from a certain Northern dental litigation firm.

I will freely accept that I have no scientific evidence for my observations and that my views are based purely on the empirical, but I personally know of no dentist who has not recently entertained thoughts that a patient might ‘turn legal’ if the wind blows the wrong way.

Over the past 18 months, I have been offering support to a close young colleague, being pursued by an extremely aggressive young solicitor (she IS young, I looked her up) who is alleging ‘negligence’ after her client developed dry socket after a routine extraction of an upper first molar. Rightly or wrongly, my colleague decided she did not want to consult her defence organisation and so I have been (rightly or wrongly) equally aggressive in demanding expert witness or consultant reports in support of their absurd claim. So far, the solicitor has failed to provide any evidence of negligence or give any reason why an expert assessor’s report has not been provided. All I know is, it has been fun ‘having a go’ back, but it to me illustrates a sad fact – nobody in the UK-based dental profession is safe from opportunistic punts from patients who want to make a quick quid from the no-win-no-fee mob.

A few months ago, a solicitor I know told me that during a local meeting of his legal colleagues, a speaker said that a lucrative and growing new source of business was dental litigation and that it was “something to think about” since the clampdown on spurious ‘whiplash’ claims and ‘Benidorm Belly’ – where package holiday tourists claim compensation for stomach upsets caused by dubious calamari and fries - had resulted in less opportunity for successful claims. 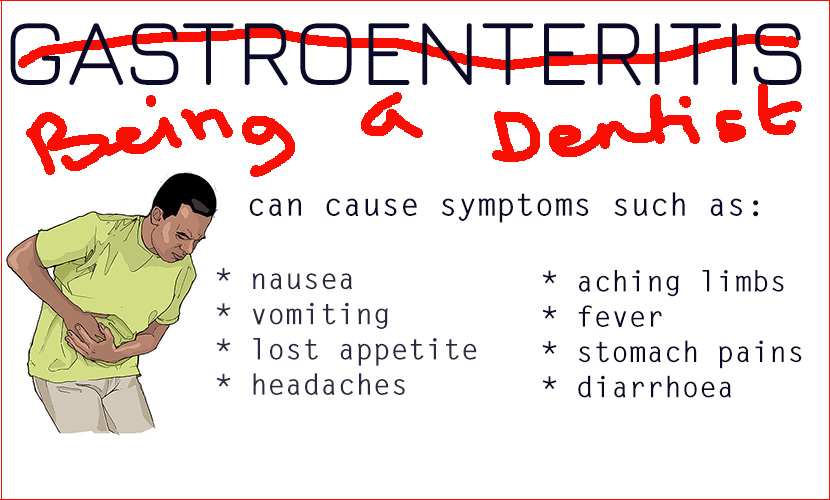 Recent experience has taught me that dental litigators are a tenacious and avaricious species and are unlikely to give up easily on an area of medical law that they consider to be easy pickings. Certainly, according to my legal friend, lawyers see it as a much easier area to be successful in than medical litigation.

Soon, the cost of dental defence subscriptions will be prohibitive to viable practice, and the profession, once all our European colleagues go back home, will find itself unable to cope with patient demand. What is the answer? Your guess is as good as mine.

Until then, I am going to have a rhubarb crumble and some sorbet.