Why Call The Ghostbusters When There’s A Nurse Around? 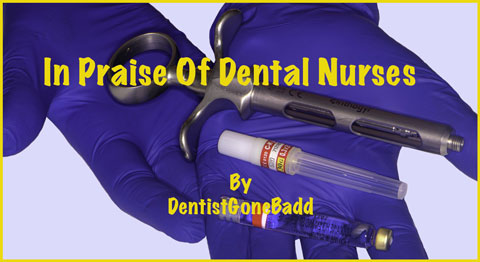 Admittedly, it wasn’t that often, but I did socialise occasionally before the eternal lockdown cycle kicked in. At the corporate I joined after I sold my practice in 2013, I was introduced to a new phenomenon - actually socialising with dental people that I worked with. Previously, I had shunned mixing with ‘dentals,’ but this lot were very different.

Why Call The Ghostbusters When There’s A Nurse Around?

I remember going out.

Admittedly, it wasn’t that often, but I did socialise occasionally before the eternal lockdown cycle kicked in.

At the corporate I joined after I sold my practice in 2013, I was introduced to a new phenomenon - actually socialising with dental people that I worked with.  Previously, I had shunned mixing with ‘dentals,’ but this lot were very different.

For a start they were all much younger than me. Previously I’d always worked in dentistry with people of my own age.  At my own practice, the staff had all put on the years at the same rate as me and although we had the odd younger trainee nurse interloper, we old wrinkles stuck together and could communally share the Nivea freely with no embarrassment or criticism to fear.

I became close friends with a few of my corporate colleagues and two in particular - a funny and immensely talented Mediterranean dentist, ‘Sofia’ and an equally amusing and clever English-Middle Eastern dental nurse, ‘Cara.’

A couple of years ago I twigged that Sofia and Cara were regularly going out on a Friday night for sushi - a food I didn’t previously like the sound of because I’d got this old-fashioned Brummie idea from the 1960’s stuck in my mind,that sushi was raw, still writhing, flapping fish.

One day the girls asked if I wanted to join them and from then, the ‘Secret Sushi Society’ was born and just the three of us went out usually once a month, to the local sushi franchise after work on a Friday night.  When I retired, I’d meet them there.  Almost invariably they would be late, leaving me sitting by myself in a booth, like the last forlorn Yasai Roll on the sushi train.

I really enjoyed these evenings, despite the ribbing I’d get when I’d inevitably start sneezing and coughing for some strange reason after consuming some of the Japanese fare.

The last outing with the girls was in February 2020 before COVID became a thing and I had to put my training in the use of hashi (Japanese chopsticks) on the back burner.  Amazingly, I could cope with chopsticks.  It must have been down to my prowess with my favourite Couplands. 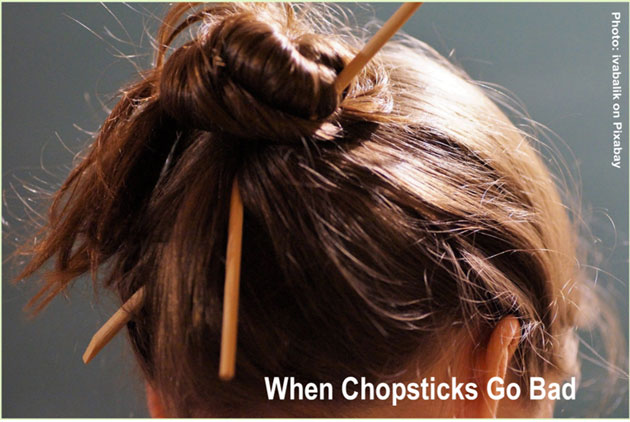 Now with all this COVID business and the delivery of vaccines being the dominant subject on Twitter, I’ve been thinking a lot recently about how my former colleagues are coping at the corporate.

Cara bothered me in particular.  She suffers from severe asthma and never one to do things by halves, also likes to collect allergies.

Cara’s history of allergic reactions raised a temporary question mark over whether she would be able to receive the COVID vaccine and it caused Sofia and me some concern, since although we didn’t discuss it overly, neither of us thought it would be a good idea for Cara to catch a dose of the COVIDS.

I heard the other day that Cara had received her first dose of the vaccine without any catastrophic reaction and all is well, much to the relief of both me and Sofia, with whom she works closely.

If Cara had to go off sick for any period of time with coronavirus, I know Sofia would be lost, and it made me think about all the times that dental nurses have come to my rescue over the years.  I really don’t know where I would have been without them. I know many dentists who would feel lost without their closest nursing colleagues.

Dental nurses have come to my rescue on more than one occasion over the years, and the bond between dentist and nurses can be an extremely strong one. Just think about how much time YOU spend with your nurse during the week.

Calgary-based Dentist Bob on Twitter summed it up best this week: 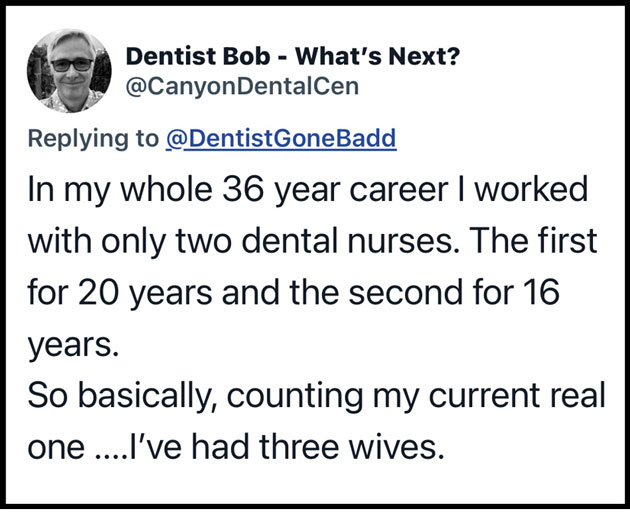 For example, on a personal level, when I started to develop severe migraines during my last few years in practice, they would look after me really well.

The first one I experienced during a surgery session caused blindness, a lopsided face and a temporary spooch impigiminge so I couldn’t convey to the nurses that it was just a migraine and there was no need to call an ambulance and go to hospital to get a CT scan in case I’d had a stroke.

I don’t know if you have EVER tried to resist a wilful dental nurse, but it is futile.  After an ambulance ride, a CT scan and a thorough work-up, the conclusion was that I was having a severe migraine.  In fairness to the nurses, the paramedics also thought I was having a stroke.

But clinically, dental nurses are invaluable.

Quite a few years ago, I  saw a lady for a filling.  She had been in for an examination a few weeks previously and had seen the hygienist at that time. I gave her a local and while she was having a rinse, my nurse frantically gestured, pointing to the floor of her own mouth and then the back of the patient. When the patient lay flat, I looked at the floor of her  mouth on my nurse’s side and there was a very faint while patch about 1cm in diameter roughly in the first molar region. It didn’t look particularly worrisome, but it hadn’t been there at examination, so I referred.  The white patch did turn out to be sinister and mercifully, the patient was treated successfully.  If it hadn’t been for my nurse spotting it when she was aspirating, it might have been a completely different story.

When the occasional patient fainted in the waiting room, it was always the nurses that sorted the victim out long before the dentists became involved, and they always drew my attention to the colour of a patient just before they flaked out in the chair.

One day, a lady turned up for treatment early, towards the end of the lunch hour.  We sat her in the waiting room, but a couple of minutes later, my nurse came in to say the female patient’s lips were looking a little ‘blue’ even though she didn’t appear to be in any distress.  The patient was known to us as an asthmatic.

It was only when we questioned the patient that she admitted to feeling ‘off colour.’ We took her into the surgery and lay her down.  She said her Ventolin hadn’t worked after a couple of tries.  We put her on oxygen and she remained conscious, but we called the paramedics.  My nurse remained calm throughout and chatted reassuringly to the patient while I quietly panicked inside, being quite concerned  having known the lady since I first qualified and she had followed me to several practices.

The paramedics arrived and after their examination, they were insistent that she went to hospital.  We had to persuade her to go to hospital and she only relented when we arranged with a neighbour to care for her dog - the patient’s main worry.

Had I known what was actually wrong with my patient, I’d have melted down completely. She was actually experiencing an aortic aneurysm it was diagnosed later, and she ended up successfully having an emergency aortic prosthetic replacement after being flown by air ambulance to Birmingham’s Queen Elizabeth Hospital.  We were told that putting her on oxygen straight away probably helped her survive until the paramedics arrived. Had it not been for my nurse spotting the lip colour at a distance, it may have been a different story. 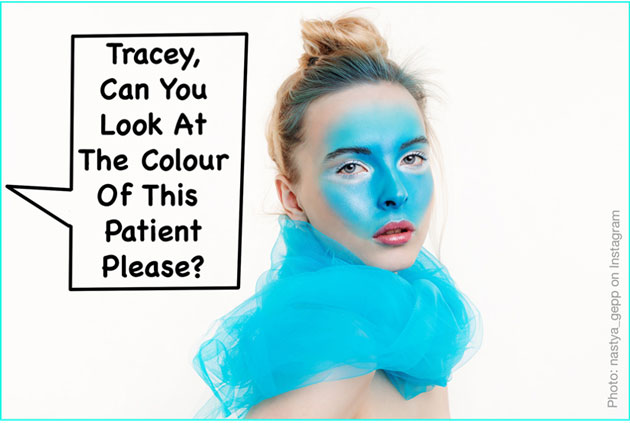 And just on a practical, day to day basis, the nurses always came to the rescue when equipment went wrong.  I’ve said before that I received no instruction whatsoever at my dental school on equipment maintenance or equipment failures.  So when that eerie beeping noise comes from the autoclave room and you have no idea what’s going on, who ya gonna call?  Well it’s certainly not the Ghostbusters.

Yes, nurses have shouted “Duh” in my face, and I’ve been called a dork on more than one occasion, but I’d rather leave the experts to it, than mess it up.  Over the years, nurses have always come through to save me from closing the surgery down, by effecting some sort of temporary repair until the engineer arrived.

Talking of dorks, have you ever been called a ‘dag?’  My first associateship after qualification was in a single-handed practice in a Worcestershire town. The practice was effectively a branch practice owned by Simon, who had another practice in the Cotswolds, where I also worked part-time.

My nurse was an Australian from Queensland.  Jill was a lovely, gregarious girl, who was travelling the world with her boyfriend and had decided to stay in the UK for a year or so.

After a couple of weeks, whenever I made a slight error, she would call me a ‘dag.’  I didn’t really know what that was, but I rightly guessed it wasn’t complimentary.  This was well before the internet when you couldn’t look these things up so easily.  Very occasionally, she would call me a ‘big dag’ and I really knew then that there was no doubt it was an insult.  She even suggested that BDS stood for Big Dag Society.   Once the internet was born, I looked up the  expression, to find it’s a lock of wool, matted with dung, hanging from the hindquarters of a sheep.  The alternative definition is that of “an entertainingly eccentric person.”  I much preferred that attribute, but I never asked Jill which one I actually was.

I have a lot of affection and respect for dental nurses and their knowledge.

When I first went to the corporate, the head nurses at the two practices I worked at brought me up to speed with optimal note-keeping and the use of computerised record-keeping, for which I was extremely grateful.  At my own practice, we were still on cards for patient notes, but at the corporate I was dragged into the 21st century quite happily, by computer-literate nurses who seemed to know everything there was to know and could answer any elementary query I had to pose.

Occasionally, nurses had their faults.

Like the  one who told me that one of my old patients was dead and I was alone in the practice one spooky winter’s lunchtime, when the patient suddenly poked his head through the waiting room reception hatch while I was engrossed in paperwork.  That was brown scrubs time. She knew all the patients and their affairs, but on this occasion she got it hideously wrong.  Fortunately my pacemaker was fully charged at the time.

At that point, I really DID feel like calling Ghostbusters.