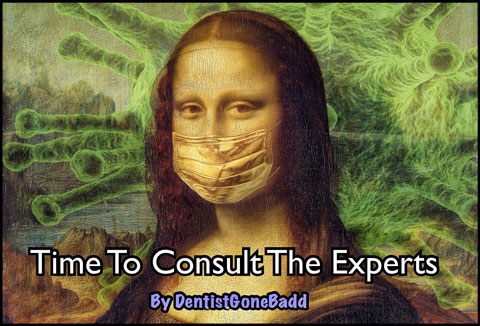 You Can’t Be Brilliant At Everything! - Let The Nurses Take Charge

You Can’t Be Brilliant At Everything!

People are now beginning to talk out loud of the reopening of UK dentistry in terms that aren’t purely ethereal, wishful thinking, or out-and-out pie-in-the-sky. Admittedly, many foresee a phased return to practice rather than a full-on nationwide and choreographed ‘ta-daaah!’, but at least there is a chink of light dimly gleaming at the end of the dark, dark tunnel where they keep the decent PPE.

I took heart on behalf of friends and colleagues who are still desperate to get back to their patients last week when Jason Wong said on Twitter: “Having examined the evidence I believe that we now have enough to have a strategy to mitigate risks within a dental surgery setting.’ He added: “Declaration of interest I have whole day of virtual meeting & am missing clinical work very much.” This was good news, because Jason knows his dental onions.

I have friends and ex-colleagues who are currently desperate to get back to their patients and my sentiments echo those of Calgary-based and red sports car obsessed dentist Dr Rob Ronaghan (known to his Twitter friends as Dentist Bob). Bob said: “If I hadn’t sold my dental office three years ago, I would be under a tremendous amount of stress right now. Actually, I am anyway, as I worry for all my dental brothers and sisters.” He reassured everyone with: “It’s going to be ok...but it will take some time.”

Late last week I put a quick survey up following an update released by the CQC. The release said: “The decision to offer dental care services is one for the provider to take. Alongside guidance given by Public Heath England (PHE) and the General Dental Council (GDC), CQC encourage dental providers to give proper consideration to the communications from the Chief Dental Officer (CDO) regardless of whether their practice is NHS, private, or mixed.”

Some dentists took the first line of the CQC’s release as a greenish light to reopen practices but the majority said they were waiting for direction from the Chief Dental Officer before opening up. Others said even if they had the will they couldn’t anyway because they didn’t have the PPE. 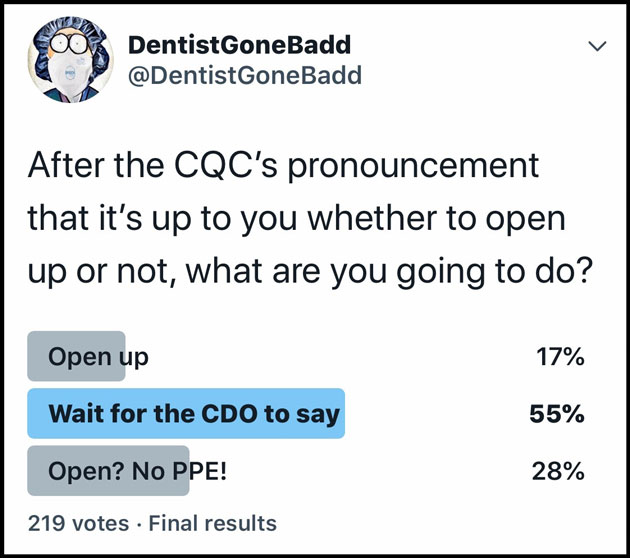 So, it appears that until the four CDO’s give the go ahead, the majority of dentists will reluctantly continue under the present arrangements for caring for emergency patients that many dentists are finding both stressful and frustrating to sit back and witness. It doesn’t help the anxiety of dental professionals that in the past couple of weeks, the profession has come under growing fire from patient-led social media groups that have been less than sympathetic with the plight of dentists who have no choice but to comply with CDO directives - as soon as she makes them widely available and provided they are not just printed in an online dental publication not everyone reads or has access to.

It appears the main focus of practitioners is how they will actually put the ‘new normal’ dentistry into practice on the return of general dentistry. Until the profession gets specific directives from the Sara Hurley and her CDO colleagues, it will be difficult to know exactly what is required from practitioners in order to be deemed to be practising safely, although I do know of practitioners who have already made moves to equip their surgeries ready for the green light.  I know of at least one practice that has invested in expensive and heavy-duty hospital grade air filtration units which filter a surgery’s air in 2-4 minutes.

Many think that ‘shifts’ will be introduced into practice in order to free up surgeries to allow for the inevitably increased decontamination times required between patients. I’ve heard of a couple of practices that are planning split shifts of 8.00am – 2.00pm and 2.00pm – 8.pm. However the profession opens up, it’s going to take a lot of planning and it made me wonder which members of the team are best suited to lead the cross-infection/COVID battle when dentistry is finally off the starting blocks?

To me, it’s obvious. The dental nurses!

Now before you dash off to find a pitchfork to lynch the sacrilegious witch, hear me out.

Let’s face it, are you as a dentist REALLY capable of leading an in-house revolution in cross-infection procedures? Yes, you WILL have to fork out for any new kit the authorities decree is essential to practice, but have you the time, the energy or the knowledge to blaze a trail through new guidelines?

So why not leave it to the experts? And dental nurses, are THE experts in cross-infection control, knocking the ball out of the park over dentists, medics and even general nurses. Every day, dental nurses are hands on in practice, turning over hundreds of instruments quickly to an operating theatre standard, as second nature. Most State Registered Nurses would be hard pushed to name and describe the sterilisation processes involved in preparing instruments for reuse, since most hospital instruments go to central sterilisation departments in some mysterious and never seen secret building where they probably also keep Donald Trump’s tax returns.

When you are making final preparations to open up again, you will be preoccupied with the finances of your practices and trying to figure out how you are going to accommodate all the patients who have been clinging on desperately, waiting for you to fix their broken cusps, clasps and caries. Do you REALLY want to do the cross-infection planning as well?

Dental nurses know how you work better than you do. They know how long you spend faffing about in the surgery with patients and they can sort your patient lists and timetables out with no problem providing you don’t interfere, so don’t interfere. Let the nurses liaise with reception so you don’t double-book yourself in and find yourself walking into a face full of disinfectant in the room you aren’t supposed to be in for another hour. 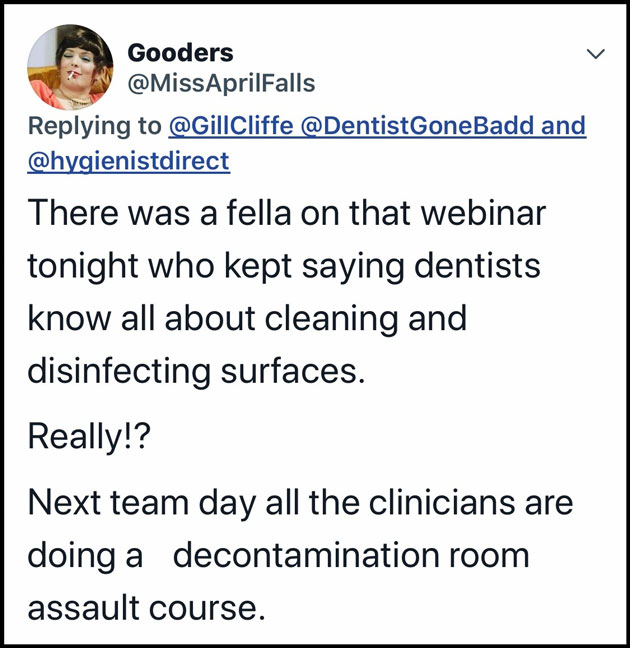 Be honest.   Have you EVER inducted a new trainee nurse yourself into the ways of decontamination and sterilisation? Of course not – mainly because you forgot all that sort of stuff after finals.

Do you know how what to do when the autoclave beeps and there’s an ‘F2’ warning?* Would you know how often to put a test strip in the autoclave and what does it mean when the spot on the strip turns amber?* How often should you monitor an autoclave cycle and is there an App that will do it for you?

Why did that thing melt the last time you DID try to put the autoclave on? And which bits have to go in the sharps box and which can be chucked in the orange bag? Admit it, you are WAY out of your depth.

How often should temperatures be checked as part of the Legionnaire’s regime for example? How often does the thermometer need calibrating against the SDI standard? And the water purity check for autoclaves – how often is that done? Not a clue? Well that’s because I just made the last two things up but you didn’t know that.

Finally, would you know how to put a washer-drier on and would you need to change the regime post-COVID? I haven’t a clue either, but the nurses almost certainly would.

In my experience, and I include myself in it, dentists are the greatest cross-infection risk in dental practice and the nurses are the ones who know how best to control you. Cross-infection regimes are suddenly going to become very complicated and most of it is going to go straight over your head.

So, give yourself a break and leave it to experts. You’ll feel better for it.