Dental Burnout - Don't look at me, I don't have a clue how you fix it! 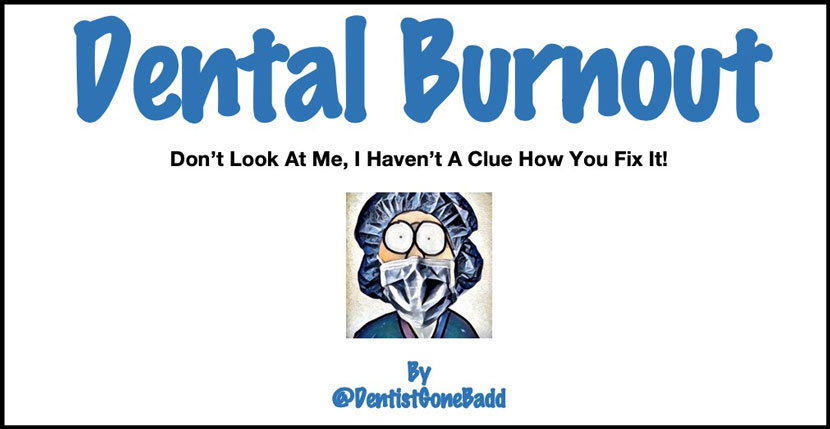 Two worrying reports came out last week which indicated that significant numbers of practitioners in both the dental and medical professions may be suffering from burnout.

A Dental Protection survey of UK dentists showed that 50% of respondents had thought about leaving the profession for reasons of personal wellbeing, while The Guardian reported that almost a third of UK doctors may be suffering from burnout, stress and “compassion fatigue,” following the publication of a survey of over 1600 doctors in the BMJ Open journal.

These figures didn’t surprise me in the least, particularly those related to dentists. Although I couldn’t put an accurate figure on it, for example, I didn’t use my usual:

formula to figure out EXACTLY how cheesed off my ex-colleagues are, I can just tell – in the same way a patient intuitively knows they need antibiotics instead of a root-canal – but I unscientifically established that a lot of dentists are pretty down and almost out.

And the reason I reckon I can recognise signs of stress and burnout in dental colleagues is that I self-diagnosed burnout in myself some years ago – probably a month after I qualified. Mild exaggeration maybe, but I began dentistry stressed and over the years I picked up more and more anxiety at an increasingly fast pace, like a snowball rolling down a fluffily snowclad Cotswolds hill until finally landing in rabbit poo.

The causes of stress in dentistry are manifold and have been done to death: High patient expectations, treating challenging patients, chasing targets, keeping up with regulations, financial pressures, chasing NHS ‘treadmill targets,’ staffing problems, fear of litigation and the GDC - the list is endless. Just as an aside, I always thought ‘Fear Of Litigation And The GDC’ would make a great name for an Indy band. 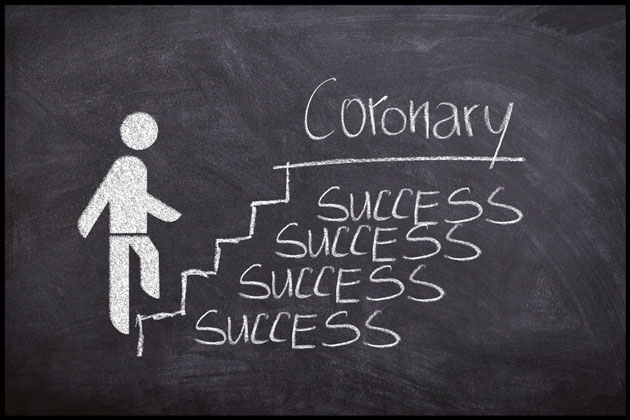 I always felt that one of the main pressures on dentists comes from within. Dentists are way too picky and critical of themselves for their own good. I’ve known loads of dentists over the years who’ve beaten themselves up for things that haven’t gone quite according to plan because the task they attempted was frankly impossible, and the only support you can offer is “I’m bloody glad it was you, and not me.”

Burnout is defined by HelpGuide.org, a website specialising in mental health and wellness, as:

“A state of emotional, physical, and mental exhaustion caused by excessive and prolonged stress. It occurs when you feel overwhelmed, emotionally drained, and unable to meet constant demands. As the stress continues, you begin to lose the interest and motivation that led you to take on a certain role in the first place.”

It is, isn’t it? Well according to the Dental Protection survey, there’s a one in two chance of it being you. Certainly, if I’d been a respondent, I would have broken the internet adding extra comments about how dentistry nearly broke me like a dodgy foldable Android phone screen.

According to HelpGuide.org, signs that you are on the road to burnout if you consider that “Every day is a bad day.” If you are “exhausted all the time” or “feel that nothing you do makes a difference or is appreciated” or you feel “the majority of your day is spent on tasks you find either mind-numbingly dull or overwhelming,” then you could be on your way to burnout.

The physical signs and symptoms of burnout can include lowered immunity and frequent illnesses to frequent headaches and muscle pain as well as sleep disturbances and change in appetite.

Emotional signs and symptoms of burnout can result in a loss of motivation, a sense of detachment and a feeling of being alone, a sense of failure and self-doubt and decreased satisfaction and a sense of lack of accomplishment.

Yup, I had all of those as well as being a devotee to procrastination, isolating myself, taking out my frustrations on others and very occasionally, skipping work. When I ran my own practice, if there was a snowflake in a county 100 miles away, I’d shout to my receptionist “CANCEL,” leaping on any excuse, no matter how pathetic, not to work.

One snowy day in about 2010, I was travelling to work and went into a skid down a hill and was heading towards a road blockage caused by two cars which had already crashed. I managed to veer off on to a verge a few yards short of disaster, perilously close to a ditch. I was completely unscathed apart from being a little shaken. I gave myself the day off, feeling it was fully justified in order to get the tracking on my car checked after hitting the verge. In short, I would leap on any chance to not face patients. In fairness, most patients said they were going to cancel anyway when my staff phoned to make another appointment, but that’s not the point.

My self-diagnosis was based on the nausea-inducing dread in the pit of my stomach I experienced every single work day morning. It didn’t necessarily get any better at the weekend. It didn’t matter whether I was on a day off, or even on holiday, I couldn’t get past the fact that it was inevitable that time would march relentlessly and inexorably towards more patient-time. For patient-time, read blackness and despair.

I have spoken before about my IBS and although I remember having it when I was ten years old, I can’t remember having had it as badly as when I started work in practice. Exacerbations were definitely related to particularly stressful times in surgery and my gut has definitely eased since retirement, though it’s not cured by any means – probably because I still worry about the things YOU are getting up to.

The other malaise I developed about ten years ago, was frequent migraines. Until I got used to them, these were very scary, since I would actually lose sight in one eye and get impaired vision in the other. Some of the migraines affected my speech and when I first had one at the corporate, despite my protestations that I was just having a migraine, my nursing colleagues called an ambulance and I ended up in A&E having a CT scan, checking for stroke. I refrained from saying “I told you it was just a migraine” when the A&E consultant finally came round to my trolley to give me the good news that “We think you’re just having a migraine.” 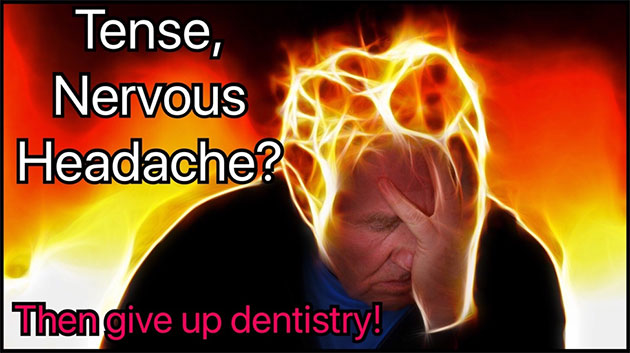 Being in my own practice and being the only full-timer in the place (I had two part-time associates), it was difficult to take time off from either patients or paperwork. I hated every second of running a practice and having to be there pretty much all the time (I never had half-term off in 19 years since the associates always bagged those weeks), there was no escape. My stress met the definition of burnout – it was excessive and prolonged and I found myself withdrawing from everything and everyone, including family. I took little interest in what was going on around me, either at work or at home and I took no pleasure in anything that was presented to me as entertainment.

I tell a lie. There WAS one thing that cheered me up. We had had some minor malfunction at the practice – I vaguely remember it might have been a leak or something similar. At lunchtime one of the nurses asked what would happen if we had a major malfunction that stopped us working. There followed half an hour or so of lively discussion while we fantasised about a disastrous Act of God that put us out of action for a year or so and the insurance company met our expenses and wages for the whole period while the place was rebuilt. That made me happy.

I can honestly say that I didn’t reach the point where I had stopped ‘caring’ about patients, but I can see that it could have gone that way if I’d had to endure another year or so in my own practice.

So, what CAN you do about burnout in dentistry? Getting rid of UDA’s and banishing all dental litigation lawyers to the colonies would be a start, but that would need legislative changes and a cattle prod. There are various methods that are suggested (see URL below) like taking regular exercise and eating properly (that’s where I probably went wrong, I was addicted to Crunchies), but I would suggest these strategies probably aren’t that helpful in the situation where practitioners bear so much responsibility for themselves and patients. In my case, seeing a psychotherapist helped, but not completely.

Another strategy suggested is to take time off. I once worked with a chap in the early 90’s who holidayed every six weeks – he was pretty chilled, but I very much doubt that would work nowadays in such intensely demanding quota-driven times.

Suggestions for combatting burnout range from making friends with colleagues (just avoid the miserable old chap in the corner who is waiting for his NHS pension to ripen and spends his lunchtimes Googling senior citizen funeral plans) to getting more sleep (I can’t say I actually slept properly for about 19 years).

I know this isn’t helping a lot, but I DID manage to escape the oppression of burnout, though it was a bit drastic – I changed my job. I sold my practice at a deliberately knockdown price and went off to a corporate to work as a carefree associate for the final seven years of my career.

I know I moaned incessantly on Twitter about the corporate and corporates in general, but the last seven years in dentistry was the most enjoyable period of my dental life. I can’t put my finger on exactly what it was that brought me out of the doldrums – it could have been my numerous and delightful young colleagues that I mix(ed) with socially (I could never bring myself to socialise with the associates at my own practice), or it could just have been that I didn’t feel so isolated as I had been for the previous two decades. Or, it may just have been that I had shed myself of the administrative burdens that shackle the principals of independent practices, the corporate having PM’s and specialist departments that dealt with all that stuff.

They say ‘change is as good as a rest’ – I would go further than that. Change is a life-saver. I had to do it.

There is nothing more pathetic than a senior burned-out dentist addicted to Crunchies.