Prolonging the agony? - My view on Slow Dentistry - By @DentistGoneBadd

Slow Down, You Move Too Fast

(Simon and Garfunkel Knew Quite A Bit About Dentistry)

GDPUK reported last week on the UK launch of Slow Dentistry® a movement designed to introduce the notion that patients would be better off being treated in a calmer manner, by practitioners who aren’t battling against the clock. As if we hadn’t worked that out within a couple of hours of starting in general dental practice. The idea is that the patient will receive better treatment and the dentist will gain inner peace and contentment.

The Slow Dentistry® network was started in Switzerland early in 2019 by Dr Miguel Stanley and his sister Nina Blaettler, who had apparently had a bad experience at the dentist. It wasn’t quite clear what that experience was, or whether it was related to fast dentistry – it might just have been that the dentist treating her possessed all the clinical finesse of a hamadryas baboon, but for the sake of argument, let’s assume it was down to the clinician working fast because his impatient nurse had an Uber waiting outside to whisk her away on a hot Tinder date.

Anyway, the Slow Dentistry® network launched in the UK a couple of weeks ago and 200 dentists were said to have attended the launch event. The campaign to get dentists to slow down claims it is receiving twenty applications to join its network, per month. There are reportedly five UK practices already approved to join the network. (You can’t just join, you have to be approved – I am assuming a stopwatch is involved somewhere).

Slow Dentistry® recommends a minimum of one hour for each patient appointment  (I assume treatment appointments) in order for practitioners to meet its four main ‘cornerstones,’ one of the most important being ensuring thorough disinfection of the surgery.

The launch of Slow Dentistry® in the UK was preceded by the network obtaining information from the Care Quality Commission under a Freedom of Information request which showed that one in 20 dental practices inspected by the CQC last year, breached Department of Health rules on infection control and safe premises.

The cornerstones of Slow Dentistry® are:

Before I launch, let me say, I completely empathise with the aims of Slow Dentistry®. I mean, what UK dentist, particularly an NHS dentist, want to take a comfortable amount of time to carry out a procedure?

The Swiss don’t have an extensive public dental service and treatments are very limited and are confined to the treatment of serious problems associated with the masticatory apparatus and genetic defects. Some basic provision is made for the extremely poor. So general dentistry is provided either under insurance or on a private basis.

I saw the cost of some restorative items in Switzerland being described as ‘eye-watering.’ For a 3-ply gold filling (whatever that is), it was priced at 1254.09 francs, which is £975.76. So, at those sort of prices, it would appear that the Swiss have a little bit of latitude in their ability to stretch appointment times to accommodate a slowing up of dentistry, without, I would suggest, a significant reduction in income. 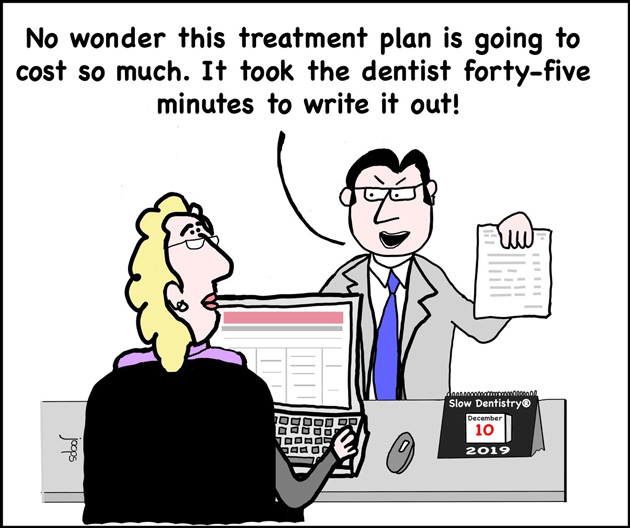 Ensuring that surgery cross-infection control is impeccable, is obviously a laudable aim, but the cornerstones of Slow Dentistry® would imply that anyone who is NOT a Slow Dentist is running a less than salubrious dental emporium.

What’s not clear is when, exactly, are the cross-infection procedures carried out during a Slow Dentistry® session? You’ve already promised a leisurely full hour with the patient, so when, exactly, do you tidy everything up? In between patients?

A quick 90 second wipe-down at the end of the surgery? In that case it would really be Slovenly Dentistry©. Or do you pinch fifteen minutes off the patient’s precious hour to make it Procrastinatory Dentistry™, which is what I developed and practised throughout my career, though most of the spare fifteen minutes was filled with cakes rather than all Gigasept.

I would have loved to have worked at the speed I did AND made money, but the fact was, I was NEVER even a medium-paced dentist, let alone a speedy one – hence the reason I didn’t make a pile of cash, especially out of the Nash where I chose to stay throughout my career.

Again, I wholeheartedly embrace the idea of waiting until the local anaesthetic works, but to be honest, I thought that the vast majority of dentists did, otherwise what would be the point in giving one in the first place?

Fair enough, I used to go a bit over-the-top with regard to anaesthesia. I have written before that I hated giving locals and would ensure that the topical anaesthetic had almost given the patient pulpal anaesthesia before it’d introduce the needle into the situation. I’m not sure who the topical was for, whether it was to help the patient remain comfortable, or to stop them jumping at the hypodermic, which in turn, would stop me from jumping, which was more important since I have an erratic heart rhythm.

I can fully embrace the sentiment that local needs to be given time to work and have never understood those of my colleagues who seemed to put the local down and pick the drill up in the same movement. In a half hour appointment for something like a simple occlusal, I would spend twenty minutes waiting delivering the local and ten minutes carrying out the work.

It was worse with ID blocks. I NEVER had any confidence in my ID technique, hence the reason I waited so long to ensure they worked, and that was despite the fact that I once attended a symposium on local anaesthesia and the lecturer (an oral surgeon who I forever after, worshipped), said there was no shame in giving two cartridges of anaesthetic for a block. I met up with an old friend that I trained with recently and he disclosed that he also gives two cartridges for ID blocks. It must be an oral surgery thing.

The idea of giving the patient a full and thorough explanation of treatment options and ensuring they can give fully informed consent appealed to me. Sometimes I would almost leave no time for treatment at all after I’d finished blathering on about the pros and cons of treatment. I once had an associate who had fully embraced Procrastinatory Dentistry™ to the point where he could talk himself through all the pros and cons of treatment that he would completely run out of time. His favourite saying was, when the patient asked for guidance: “I’m going to sit on the fence about this one.”   It took a couple of years to sort out all the work he failed to do once he left the practice. 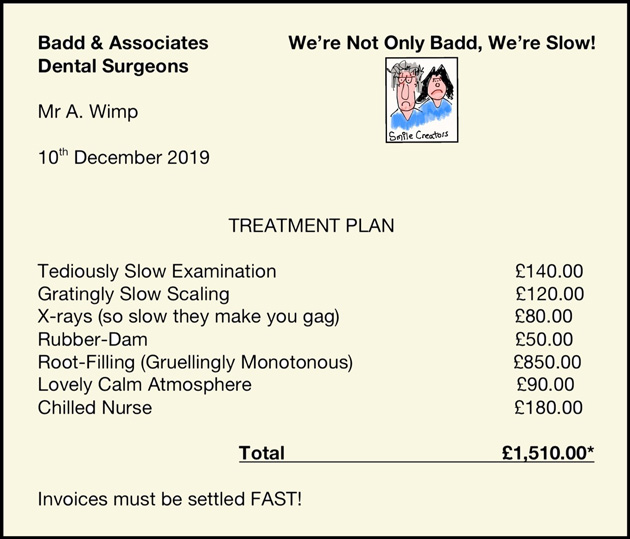 And as for putting rubber dam on in appropriate circumstances, forget it. It would take me a full hour to get one on, my main concern being that I didn’t perform an inadvertent palatal gingivectomy when I was placing the clamps. I needed a full hour to write an endo referral though.

While completely seeing the point in a movement towards a slower pace of working for dentists, I can’t see it taking off in the UK, except maybe in Wimpole Street and Harley Alley. For the vast majority of dentists, even private dentists, focus is on remaining competitive and trying to achieve impossible UDA targets. I have no idea what overheads are like over in Switzerland but I wouldn’t mind betting they don’t have all the expenses that UK dentists have to absorb in order to meet mandatory regulatory requirements.

Because NHS dentists adapted (or had to adapt) to the harsh economic environment the health service threw at it, the UK Government is used to getting bulk dentistry delivered quickly and cheaply. We learned to carry out procedures quickly under the old fee-per-item system and inadvertently shot ourselves in the foot when the evil UDA system came around.

Early rumours about the much awaited and forthcoming new dental contract indicated that we would have much longer to carry out an examination – mainly because of all the faffing about with traffic lights you have to do, but I would doubt if that would necessarily indicate that we’d have a commensurate increase in allowed treatment times, compensated by an increased range of fees.

The BDA Chair Mick Armstrong made the same point about dentists chasing targets. He told The Telegraph “As health professionals, we need the next Government to give us time to care.”

Unfortunately, Mick, I think we’ll be waiting a bit more than an hour.

So what would be the benefits of Slow Dentistry®?

Calm dentists? Sure. Calm nurses? Hopefully. But what about things like, l dunno, WAITING LISTS??? 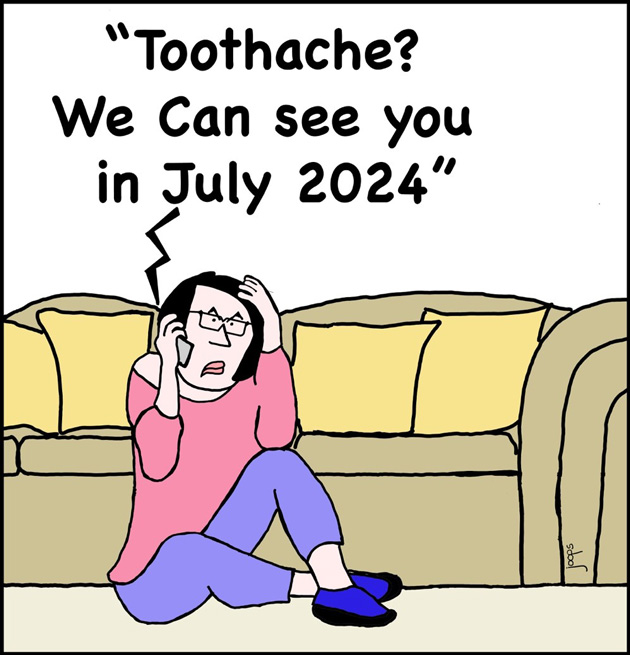 Most dentists have pretty long waiting lists and assuming you normally see three patients an hour (not my estimate), if you go down to one patient an hour, you are reducing the numbers of people you can see per day by two thirds (impressed with my maths?).

So what will be the effects of inordinately long waiting lists?  I would suggest angry and frustrated patients (apart from the ones in the chair), not to mention receptionists on the edge of despair and resultant in-practice conflicts between reception and clinicians which neutralise the benefits of a calmer surgery.