The holidays are coming

It's the summer, and soon you'll all be inundated with patients wanting their teeth fixed before they smile nicely for the border control people. Brace Yourselves, People - The Holidays Are Coming. By @DentistGoneBadd 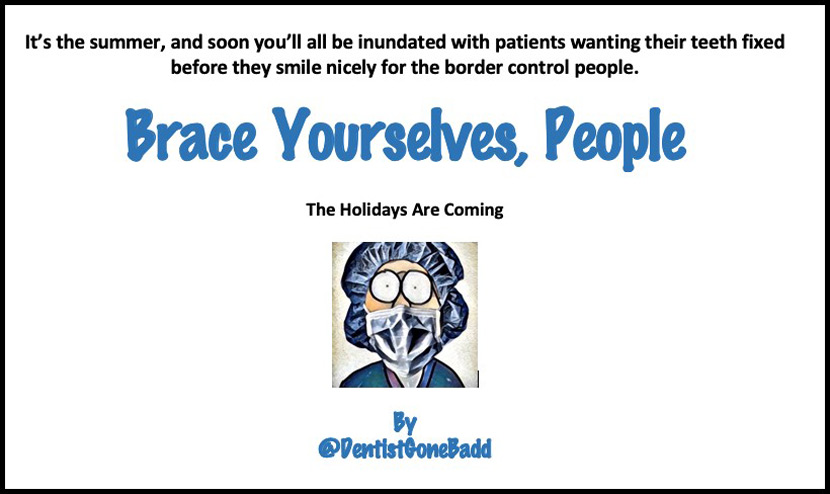 Was That A Cuckoo Or A Turbine?

Before I went into dentistry, I always thought the song of the cuckoo was the first sign of summer. I remember way back it was a tradition for Radio 4 listeners (usually called Mrs Cholmondsley from Thrush-on-the-Wold) to write in and tell Brian Redhead when they heard the first cuckoo of spring. Nowadays, the ornithological world is torn. It could also be swallow, swifts or house martins.

There is no such debate in dentistry.

The first sign of the height of summer in UK dental practices is the call of the desperate: “Can you see me today? I’m going on holiday tomorrow.”

As I write, the schools around my way are three days away from breaking up for the summer and that means many families will be heading off to Brittany, Cornwall or Tuscany, assuming Thomas Cook are still operating come Saturday. 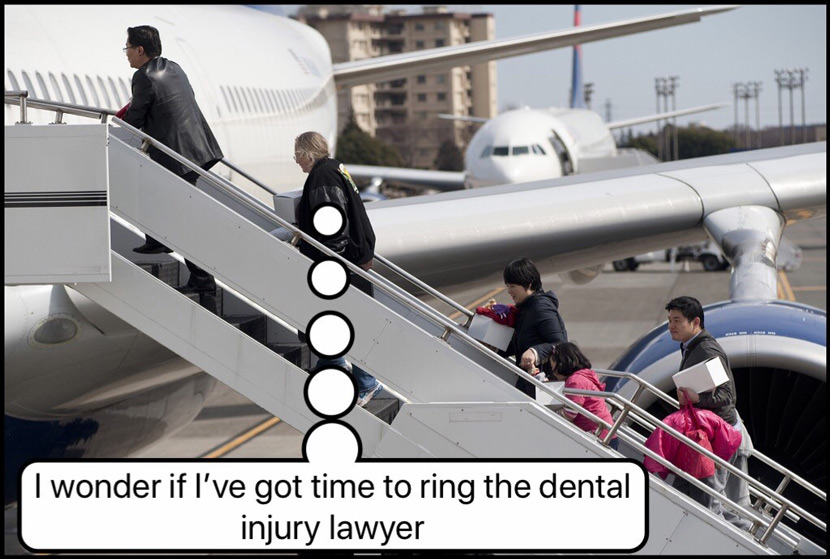 And this means GDP’s will be bracing themselves for the tricky last-minute emergencies that require definitive treatment instead of a “That’ll keep you going till Monday” approach.

This is the time of the year where you will often find yourself throwing away long-held and fiercely cosseted principles, just to get the patient (and you) out of trouble

You know the sort of thing – where a patient flattens a crowned tooth hours before flying off to Florida.   It’s ALWAYS an upper central and it’s always to gum level. The patient has had no pain or sensitivity with it and a radiograph shows there is no apical radiolucency….yet. You suspect that at some time in the not too distant future, you’ll be having to RCT the tooth (which fills you with fear because you’re looking at where the pulpal roof should be and can’t see it), so what do you do in order to not compromise your future doomed endodontic adventure?

I’ve known a couple of dentists over the years who would whip the pulp out (if it’s still there), start RCT, create a post-hole and put a temporary post-crown in. I have a very vague recollection that was the teaching at my dental school. In the real world (and by ‘real’ I mean NHS), that would be impractical and fraught with danger. In my hands, I reckon that sort of treatment would result in post-operative pain and infection in a previously symptomless tooth. “My holiday was ruined by what you did!”

My approach used to be give LA (even I thought the tooth was Dodo) and use dentine pins – yes, pins – to build a composite core up for recementing onto. It was pretty much the only time I would use pins, having been haunted by a career-long fear of splitting the peripheral tooth structure or worse, saying hello to Mr Pulp. The advantage of this was that you hadn’t committed to RCT at that point and you might even get away with it. I had several patients who at the point I retired, still had crowns functioning that I’d pinned as emergencies many years ago.

Very occasionally, I’d meet a root that had poor dentine that wouldn’t take any pins for whatever reason and that left you struggling, particularly if there was nowt around to support a temporary. A few years ago, as a temporary measure, I abandoned even attempting pins and built up temporary crowns using composite temporary crown material. I’d hold a clear matrix strip with my finger across the palatal area of the missing tooth and then flow the composite against it and between the abutment teeth, ensuring it engaged the cervical undercuts of the adjacent teeth and overlapped the palatal and labial surfaces of the adjacent teeth. I then let it set rock hard before removing the matrix strip and shaping up. If I threatened the patient with a gruesome death if they ate on it, the temporary was invariably in place when they returned off holiday, even if the gum around it was a bit the worse for wear. The advantage was that I didn’t have to invade the tooth and the temporary was easy to remove and find the root canal when I carried out the definitive treatment. As someone on Start Trek once said: “It’s dentistry Jim, but not as we know it.” 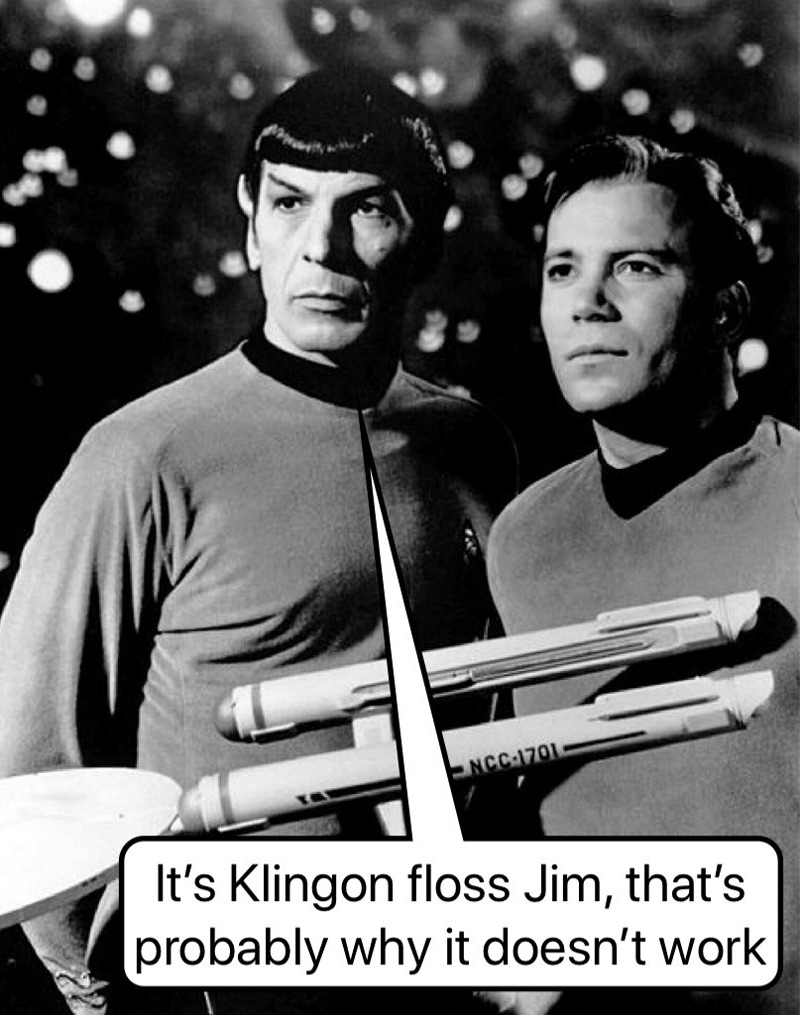 The debonded Maryland bridge (or resin-bonded bridge as they insist on calling them now) is a real nuisance if you have no time. Most surgeries I ever worked in didn’t have a micro-abrasion unit next to the laser, so obtaining a decent bonding surface for a reasonable chance of fixing the bridge for the length of a three-week cruise were negligible. Almost invariably the biggest portion of old cement was clinging to the metal framework with a few tenacious bits still on the teeth, ripping into the patient’s tongue. On one occasion out of desperation I ended up turning a Maryland into a Rochette. The patient was a dancer on a cruise ship and was due to sail early the following day. The pontic replaced a congenitally absent lower left two and the pirate look didn’t become her.  A few strategically placed holes and a dual-cured composite and the bridge stayed in place until the very day she came back.

I once tried cleaning up a Maryland as best I could and then bonding. I then covered the whole of the back of the wings and overlapping on to the tooth with composite, just to try and increase the chances of bonding. It apparently lasted 13 days into a two week holiday, so I suppose that wasn’t bad. The patient wasn’t impressed though. 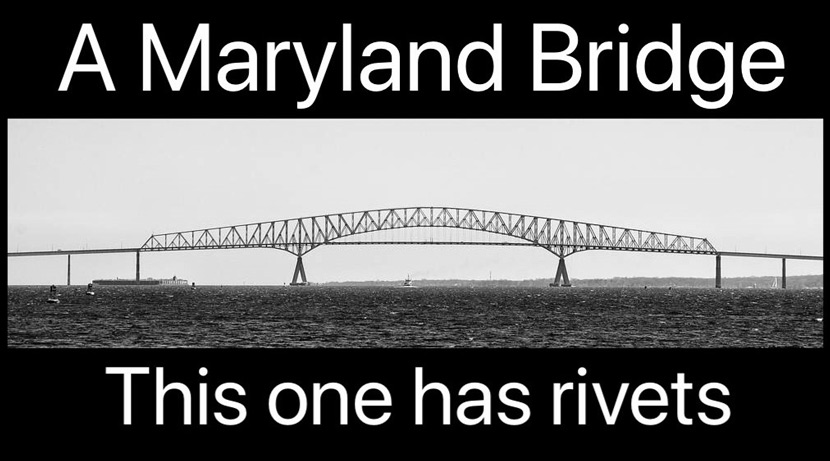 Pulpitis is always a tricky one.  If it’s reversible, do you do a definitive restoration or temporise? How do you know with 100% certainty you do have reversible pulpitis? If you take the risk and provide a permanent restoration and the patient ends up in some far-flung emergency surgery and the dentist ends up removing the filling or worse, the tooth, you either way, will be to blame.  I always as a matter of course, placed sedative dressings, used GIC as a temporary and brought the patient back. I know of a dentist who recently got caught out in this fashion.  He got slated by his own defence organisation for not providing a temporary (his final restoration was deficient in two areas because he did it quickly under pressure) and then getting the patient back for review and placement of a permanent filling.  The defence organisation said that providing treatment under duress was no defence.

Abscesses are also a difficult beast. If it’s drainable, then you’re on to a winner.  No doubts about the course of action – a sharp slicy thing and hot salt water.  But what about the tooth with a very vague area periapically and no root-canals?  Do you recommend ripping it out (assuming you could get it numb in the first case) or give antibiotics and hope to refer it later. Frankly, I always did the latter.  If you removed a tooth you’d almost certainly be blamed for  a dry socket afterwards.  Trying in futility to open the tooth up usually does little other than make the tooth more tender, though taking it out of the bite does help.  And in the unlikely event that you did actually get some drainage through the tooth, what do you do then?  The flight leaves at 5.00pm and you can’t leave the tooth open and bring Mr Snurd back for closure tomorrow.  I have personally seen loads of patients who have had a dentist open up a tooth and then close it again with a bit of cresophene on a cotton wool pledget, only to be back in agony the next day.  If the tooth wasn’t excrutiating, I’d  put the patient  on  antibiotics  and a decent analgesic.  Antibiotics is the safety net of the wimp, and I needed a safety net and thick mattresses underneath.

Denture repairs are a thorny issue also.  In my practice (and I assume every practice unless there is a lab on site), denture repairs were sent on the van to the prosthetics lab and returned the following day.  One day,  late in the afternoon, a man who had a flight from an airport 120 miles away later that evening, came in with an upper full denture fractured right down the middle. When I explained we had missed the boat for our lab, he was incredibly miffed.  He was even unhappier when I couldn’t point him in the direction of one of those 24hour denture repair laboratories. 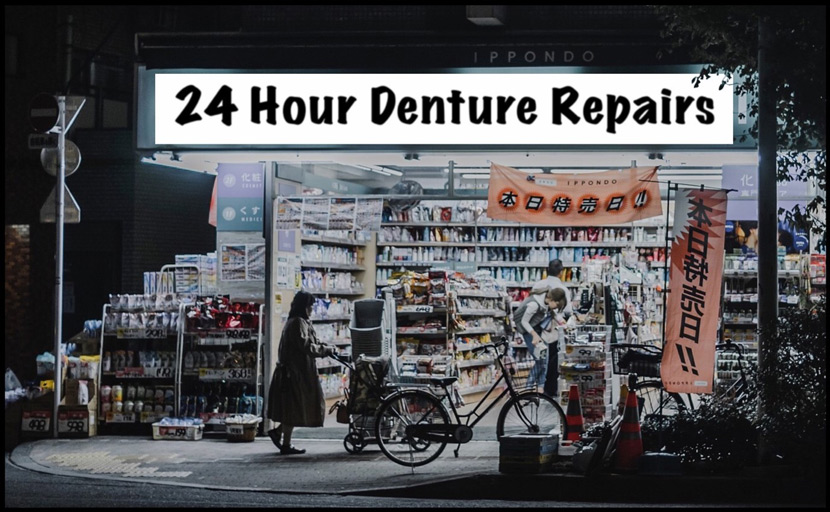 Many years ago, I’d have had a go at trying to fix him up myself with cold-cure acrylic, but since the medical devices rules came in, I wouldn’t have touched him with YOUR bargepole.

Having said that, I did have a lady some time ago who lost a tooth (again, an upper central) from her upper full denture. I undercut the distal and mesial acrylic and ran some composite temporary crown material into it. She was off on a cruise and I took pity. It looked a bit yellow in comparison with her other teeth but it filled the gummy gap until we could send the denture off for the experts to sort.

I was pretty fortunate that I can’t actually remember any children needing emergency treatment before holidays. I think parents probably see that the kids (certainly in the Cotswolds) are sorted before themselves.   But I have had quite a few youngsters present with wisdom tooth trouble just before they have been going off for gap years before university. If I could get to the offending gum flap, I’d give the area a flush with an antimicrobial, but I openly admit that I used to give them ample antibiotics to get them through the year. I doubtless broke all the rules, but pericoronitis laughs in the face of chlorhexidine.

I once had a colleague who used to run a practice which was based on a well-known national capitation-based scheme. His approach to emergency pre-holiday treatment was “Make sure you take your membership card with you. ******* will find you an emergency dentist.”

He was a pretty chilled bloke.