Sometimes, keeping quiet is the best way to remain diplomatic in dentistry. There are various ways of stopping yourself from putting your foot in your mouth. Here is my favourite.
Stock Up With Lip Balm
When Biting Your Lip Is The Best Policy
By @DentistGoneBadd 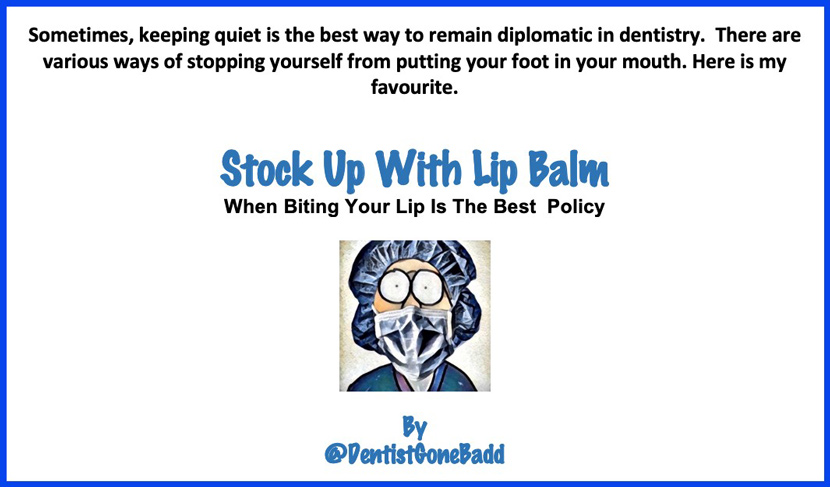 (The Art Of Silent Diplomacy)
By
DentistGoneBadd

Last week, the 45th President of the United States of America, paid the United Kingdom a visit.

We dusted the bunting off and inflated the balloons, well, one big balloon certainly, and Mr Trump dragged most of his extended family with him from the States – a bit like the bloke whose family insist on trailing into the surgery with him to watch him having a filling or a surgical extraction.

By all accounts, Trump and the clan enjoyed the welcome they got from the Royals and the Prime Minister, and he only managed to sow minor discord. Firstly, he slagged off the Mayor of London via Twitter at the same time Air Force One was making its final approach into Stansted. He was apparently not put off tweeting by the giant phallus some wag had mowed into the grass near the final approach to commemorate his visit. Trump also reportedly referred to Meghan, Duchess of Sussex, as ‘nasty’ in an interview with The Sun, though he later said he didn’t, despite it being on tape. Finally, he told Theresa May that any UK trade deal with the USA had to include the NHS being ‘on the table.’ Presumably that meant the UK being spread-eagled on an operating table, legs akimbo, awaiting castration. Within hours, he had metaphorically sewn them back on, reversing his position when he told Piers Morgan that the NHS isn’t ‘trade.’

Our current precarious economic position in the world made it crucial that our welcome of the President was warm and diplomatic. We may well be calling on trade favours near the end of the year and it was excruciatingly important that the Royal Family in particular, made the 45th feel warm and loved. You can rely on Queen Elizabeth II to be ever the diplomat and the only leakage of Royal ‘dissent’ came from the delightful Duchess of Cornwall, who was caught by the cameras winking playfully as she and the Prince of Wales entertained the President at Clarence House. It was like she was signalling that she was putting up with the whole business, just to keep the peace. 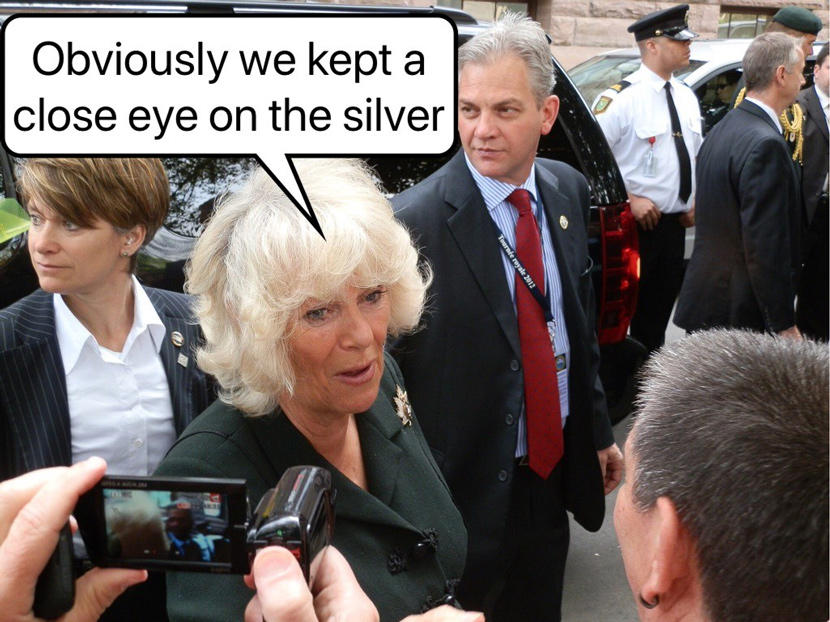 The reason I waffle on about Trump’s visit is that, bearing in mind the President’s track record of….well, everything, there MUST have been a lot of lip-biting going on among the Royals, politicians (Farage being the exception) and civil servants during the visit.  Prince Charles in particular must have been in need of super-strength lip balm after trying to put his point across on climate change during a ninety-minute meeting,  to the renowned climate change denier.

The Royals may be the masters at lip-biting and diplomacy, but Trump’s visit made me think, dentists and dental staff MUST run a close second.

There can’t be any GDP out there who hasn’t bitten his lip in the past WEEK in order to keep the peace – either with regard to staff or patients. I bet everyone reading this will be able to instantly reel off at least half a dozen occasions they decided to zip it in the interests of maintaining an easy life.  I certainly can.

You’ve probably been there.  You gave the patient all the warnings, all the risks of treatment, all the limitations and likely poor prognosis, but the patient STILL wanted to go ahead. 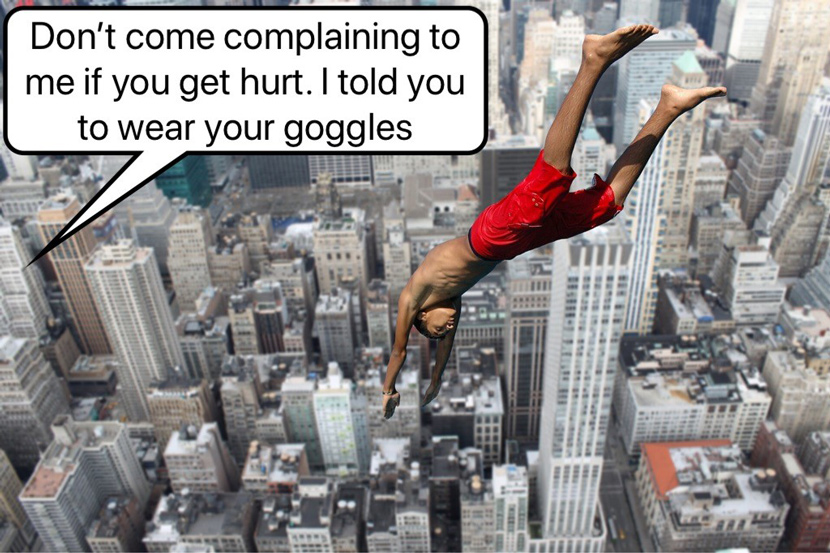 I had a new patient a few years ago who came in with a badly broken down and abscessing lower left five. He’d not been seen by a dentist for (by his reckoning) five years. He was extremely anxious and was desperate not to lose the tooth. The fractured MOD amalgam was subgingival and I warned him that the chances of a root-filling working was not great (particularly since I was doing it). He still insisted on having the root-filling done. It all went reasonably well and at his exam and review subsequently, the area at the apex looked healed radiographically. Six months or so later he requested a crown. He had lost part of the lingual cusp and I again warned him of the poor prognosis since although the root-filled had miraculously worked, the distal margins were subgingival and would have to be diligently cleaned interproximally. He agreed, accepted my warnings and asked to proceed. At the recall a few months later, the tooth was symptomless and functioning well. The distal gum was looking good although the gingivae wasn’t obviously attached to the distal porcelain. In my notes, I wrote that the patient was ‘exceptionally pleased’ with the result. I know I wrote that, because a few months after I left the practice, I got a letter of whinge. The patient had gone in for examination with a colleague and had complained that the gum was swollen around the five. My former colleague x-rayed the area and the radiograph showed a minimal negative ledge on the distal crown margins. My colleague recommended remaking and he wanted me to pay him the Band 3 fee for the remake. I pointed out all the remarks I made in my notes, gently pointing out the folly in attempting to remake – particularly with regard to the risk of removing the post. I also suggested maybe the patient resumed interproximal cleaning, which he had desisted. “I had no problems, so I couldn’t see the point.” I never heard any more, but my bottom lip took a little while to heal, despite the Difflam.

Another occasion I felt that I might actually perforate my lip was when an elderly chap came in and started saying at the end of his exam, that “Your colleague didn’t treat me very well last time.” I asked him what was wrong (I thought I’d missed something) and he said, “Nothing in particular, he just didn’t have your approach.” I was a little surprised because I had been seeing the patient regularly for a few years and hadn’t realized he’d seen any other dentist in the practice. My nurse scoured through the notes and made a classic nursey ‘the patient is confused’ gesture. It turned out that the dentist he saw WAS me – but minus the pathetic excuse for a beard that I normally sport due to an upsetting accident with my trimmer setting. I gently pointed out the confusion and the patient told me “You don’t know what you’re talking about. I was there. You weren’t.” 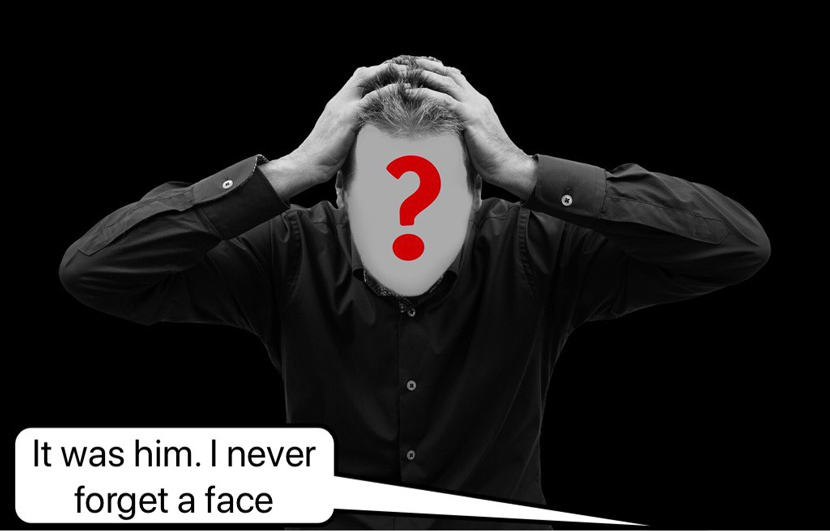 Sometimes the thing that patients can accuse dentists off are so absurd, you could run the real risk of laughing in their faces if you didn’t have the lip to fall back on. Many years ago, a lady who was worried about catching AIDS and had to be reassured about the risks of catching HIV from an ultrasonic scale to help her advanced periodontal condition, then accused me of spraying calculus into her mouth from the ultrasonic tip. I pointed out that the calculus was being removed from her teeth, but she said “If you say so. I know what you’re REALLY trying to do.” I never found out what she thought I was trying to do.

Occasionally, colleagues can also induce lip-munching. I was once asked by a younger colleague to give an opinion on a lower partial acrylic denture he had provided for a man in his late twenties. He had complained that the denture was not retentive and was difficult to eat with. I saw the patient and had to agree with the patient that the denture needed to be replaced. The denture only fitted where it touched and the incisal edges of the two anterior denture teeth sat about three mm short of the surrounding incisors. Although I was only asked for an opinion, the patient asked if I could carry out his re-treatment, refusing to go back to my colleague. “He thinks I’m a moaner” said the patient. When I later outlined by opinion to my colleague, he went ballistic, accusing me of ‘stealing’ his patient. A few weeks later, he asked me again to give an opinion on another denture that had gone awry. When I hesitated, he was affronted that I had taken offence at his previous reaction to my opinion and vowed never to ask for my opinion on anything again. “Apart from this one.”

Sometimes, patients say or do something that is either completely inappropriate or not germane to the issue. The instinct to ask them to keep it to themselves has to be supressed.

The VERY first patient I ever had in practice came in as a new patient. I took a thorough medical history and there was nothing relevant but then the lady, in her early fifties virtually shouted “Do you need to know about me periods?”   I said no, they were not really a problem or hindrance to dental treatment. She again said very loudly so that the waiting room could hear, “You sure? Me doctor likes to ask me about ‘em. Me periods am all over the place at the moment,” which I thought conjured up an unnecessarily graphic image for the throng in the waiting room.

I also saw a lady once, who had been referred to the local oral surgeon for the removal of deeply impacted 8’s which kept giving bouts of severe pericoronitis. The problem was that there was barely anything to see of the teeth in the mouth and so local measures didn’t help. I had to resort to antibiotics on a couple of occasions. The patient said, “Not more antibiotics. They give me thrush…” As luck would have it, another nurse came in just as she was finishing the sentence “…in my vulva.” 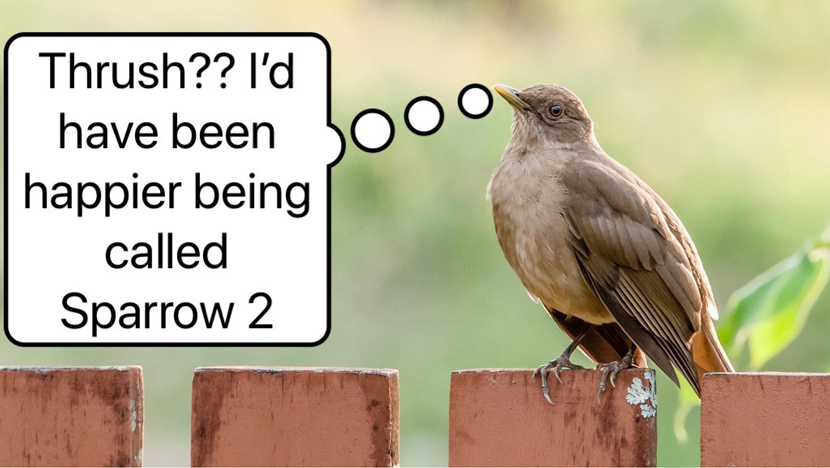 I had another young bloke – a persistently quirky one – who insisted on telling me every appointment for about five years that he was waiting to have his foreskin removed.  I am not sure whether he was doing it for shock value or to impress the nurses that he possessed the right equipment for such a procedure to be practical. He suddenly stopped turning up for appointments and I’m assuming, and hoping,  the operation turned his life around.

Which brings me to the middle-aged health service administrator who seemed to be struggling as he walked into the surgery one day.  As he entered, he said “sorry” and what I thought was “I’m an old chap.” I said “You’re not that ancient.”  From his reaction I realised he wasn’t referring to age-induced decrepitude, but was in fact  referring to his “Old Chap.”  He had just undergone circumcision and was still recovering. I’d not heard that expression out loud before and I really did have to bite hard to not explode into fits in case he thought I was mocking his affliction.

It has to be pointed out that the only time patients ever bite their lips, we get blamed for it.