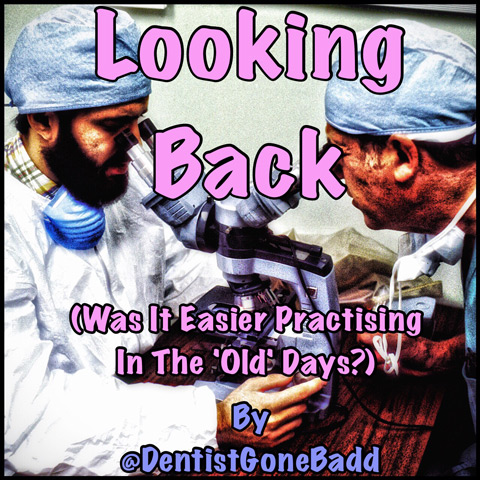 The Times, They Are
A-Changin’

(For the better? YOU decide)

As we approach the end of another wonderful year in dentistry, I expect many of us will be looking back wistfully over the past twelve months, critically reviewing our year in General Dental Practice (or Satan’s Privy as it’s known in my house), revelling in the highs, and reflecting on the lows.  More realistically, I suspect dental people will be trying to forget dentistry over the holiday period by getting trousered on iced-Baileys and Schottlander’s Old Peculiar. 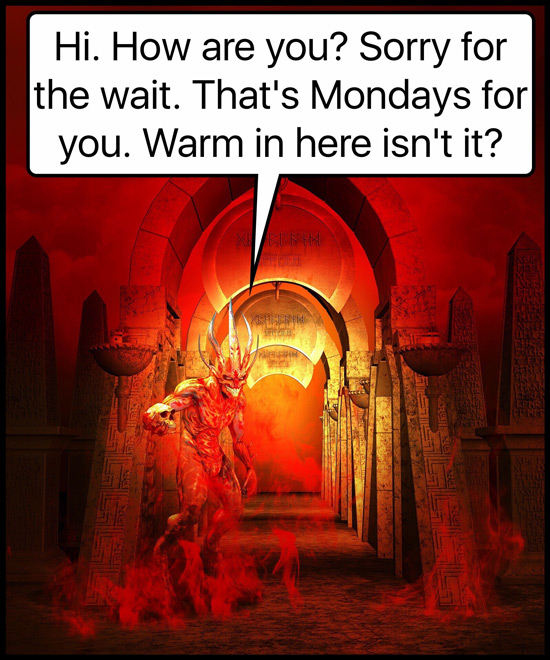 This year though, I’m genuinely reflecting on the past, since this year I have hit quite a milestone - my 30th anniversary since qualifying as a dental surgeon (as I insisted on being called in my early days. Was I ever THAT young?) and effectively condemning myself to three decades of chronic anxiety and Immodium addiction. 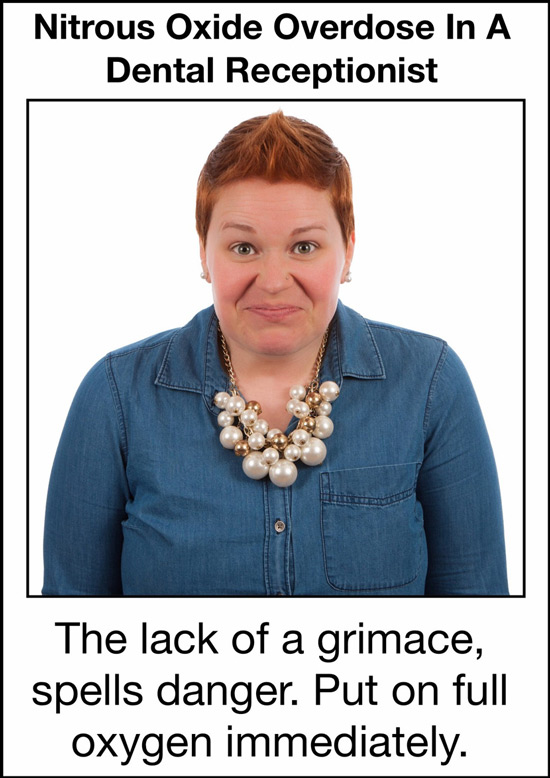 But has it ALL been bad? Pretty much.  I seem to recall having had a laugh in practice in 1992, but I put that down to a leak from the Nitrous Oxide pipework. We all crumbled that day apart from the receptionist, who grimaced marginally less than she normally did.

I have been wondering if I’m looking back over the years with a too jaundiced eye.  After all, this current period in dentistry has been the most pressured I can recall, in terms of GDC overzealousness, micromanaged regulation and patient/lawyer greed and it’s sometimes hard to recall those easier times, when you could shove a silver point and endomethasone in a root-canal without worrying about rust and the poor endodontist who had to valiantly address the subsequent failure. I mean, sometimes, specialist endodontists would spend  literally 0.05 milliseconds retrieving the point with a pair of fine tweezers.

Now I come to think about it, it surely wasn’t THAT bad back in the 80’s and early 90’s, it’s just that I am a miserable sod. We DID have easier times back then, I think,  and society seemed more forgiving as a whole. I didn’t encounter even a sniff of a solicitor’s letter until early in this decade. Then I got another one, and another, and another.  Dental litigation solicitor’s letters are like the matryoshka doll in reverse - each one getting bigger and fatter, fed by missed BPE scores and misinterpreted radiograph frequency guidelines. 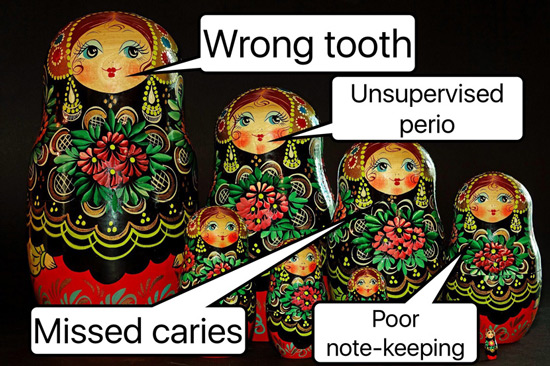 But it wasn’t only the legal atmosphere that was different back in the 80’s and early 90’s.  Techniques, materials and patient requirements were vastly different back then. We didn’t have Google to check up on us in those days, or Instagram, where our patients will instantly post selfies and give to give our newly finished work instant critical reviews. 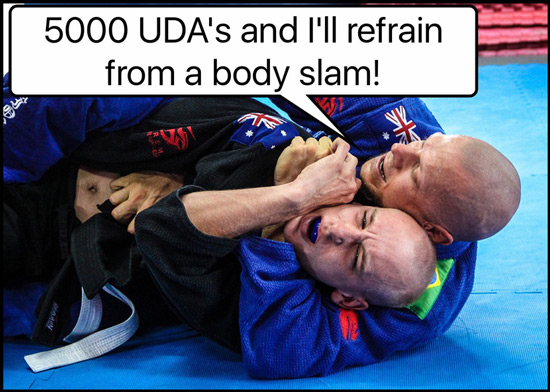 So, how was life different for GDP’s in the days of the FPC? Remember the Family Practitioner Committee? They were like a benign local branch of the Women’s Institute. They kept lists of dentists and gave you money when you handed your NHS claims in.  They didn’t dish out contracts - I say ‘dish-out’ – that expression gives the impression that you DON’T have to arm-wrestle the local Area Team for your contract, and the FPC’s pretty much had an open budget for dentistry. What treatment you did, you got paid for. Imagine that. If you did one filling, you were paid for it. If you did six fillings, you were paid for six – you weren’t paid a lot admittedly - but there was a sense of fairness about the system, even if it was still underfunded. And if you wanted to set up a squat practice in the middle of a traffic roundabout, you could.  You didn’t have to wrangle with the local authority for a contract, you merely applied for a number, and Bob was your weird uncle. 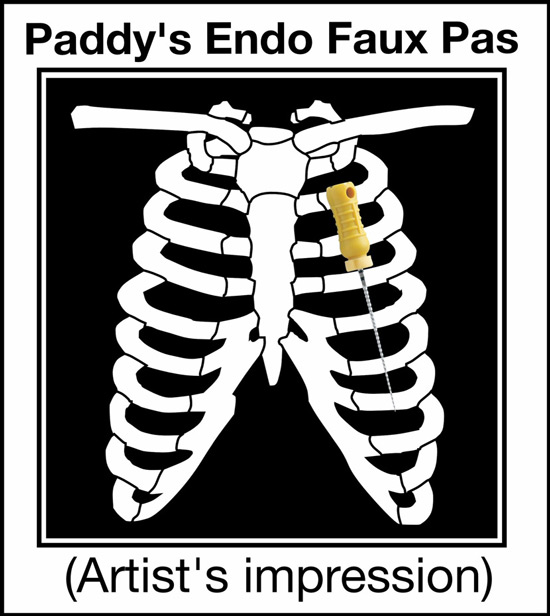 My only slight tussle ever with the FPC was with regard to ‘prior approval’ – the process you had to go through if you wanted to do a lot of bridge/crown work that exceeded the prior approval limit – that limit was roughly how much patients now pay as their portion of a Band 3 treatment. I once had to go with a patient and plead our case for bridgework in front of two local practitioners. Our plea for a bridge to replace anterior teeth on a patient in whom denture wearing was impossible due to a tooth to soft tissue anterior overbite, was turned down. This was particularly galling since I attended a lecture by the local oral surgery consultant a few months later and one of the GDP’s who sat on the prior approval appeal was singled out for special mention. I can’t remember the actual lecture subject, but suddenly the surgeon put up a slide of a chest x-ray with a No.15 endo hand file lodged in the right bronchus. Everyone gasped and the oral surgeon emphasised the importance of rubber dam, or at the very least, flossing up the files (in those days, safety seemed to be more important than treatment efficacy). After the gasps and sniggers finished, the oral surgeon (a tyrant) asked “Paddy, would you like to stand up?” Dutifully, a very red Paddy, stood up. Karma. You can’t order Karma from Kent Dental now at the corporate. Too expensive.

Nowadays, you can’t open up an NHS shop unless your practice and/or plans have been approved and the modern Area Team is prepared to distribute the UDA’s they have been saving for a rainy day. These are UDA’s they’ve nicked off another practice, by the way, so don’t get complacent, they will pinch yours next, on a whim. Overall, the FPC pretty much left you to your own devices, only occasionally sending the Dental Practice Advisor around for a friendly chat and a biscuit. Nowadays the DPA shuns your chocolate Hobnobs and is only interested in seeing your waste transfer notice and x-ray audit (all 1’s).

As I said above, I can’t remember encountering any legal challenges in the 80’s or 90’s and I personally never encountered any colleagues who did. Even Paddy wasn’t sued, apparently. It seemed a completely different environment back then. Dentists were positively encouraged not to

‘Tell-tale-tit’ on their colleagues and at my dental school, this was a general philosophy, even one of the lecturers, who was frankly, an evil bastard, said you shouldn’t whistle-blow on your colleagues since you didn’t know under what circumstances or what difficulties the operator faced in producing the said sub-standard work.

That rosy, cosy atmosphere of decades gone by, no longer pertains. Many of the complaints dealt with by the General Dental Council over the past few years have been quietly initiated by general dental practitioners, who push the patient in the direction of the GDC for whatever warped reasons – presumably spite – they can justify. Now that’s not to say I’m against whistleblowing. Where patient health is threatened, it is essential for this to be drawn to the attention of the authorities for them to take immediate action, but we have the Care Quality Commission and NHS Area Teams for that and few years ago, I was compelled to report a practitioner for blatant NHS fraud – which I think is fair enough. But splitting on a practitioner for a leaky composite? Pur-lease!

It’s easy to look back on those days through the rose-tinted’s and see the dental profession as being a much more gentlemanly time, but it’s also easy to look back and think that maybe we were too relaxed, or even slack, in our attitudes. If, we weren’t, then the bloke I worked with on qualification would have been reported to the GDC for opening my referrals for child GA’s to the local hospital and doing them himself with a dodgy anaesthetic machine. If we were more whistle-blowy, then perhaps another bloke I worked with would have been reported for doing extra-oral apicectomies – he used to take out teeth and plug them with amalgam extra-orally, before whacking them back in the socket and splinting them. He used to call them ‘implants’ in front of his patients.

And if it had happened now, then perhaps the rural practitioner whose garden backed on to a local park and was visible to all, would have been reported for gardening ‘al fresco’ (if you know what I mean), in full view of the park users. Back then, in those gloriously un-PC times, we’d have said he was gardening ‘stark b******k naked.’ 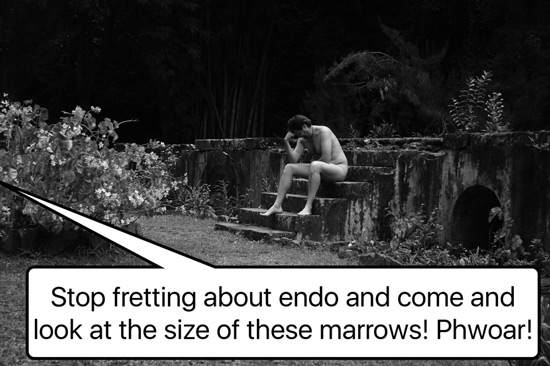 More posts from author
Monday, 10 August 2020 Now Where DID I Put That Enthusiasm?
Monday, 27 July 2020 What Dentistry Taught Me About People
Monday, 20 July 2020 Dentistry's Battle against Racism