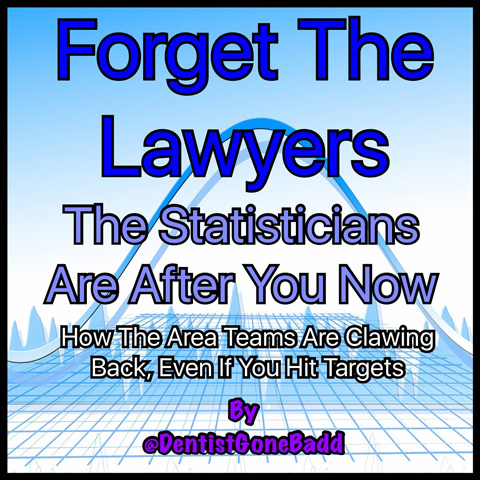 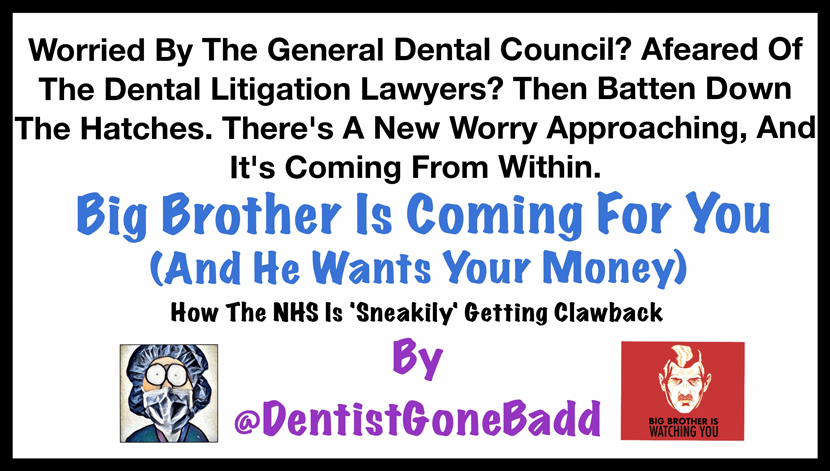 Beware Of Big Brother
He’s Not Only Watching, He Also Has His Fingers In Your Wallet

If you were ever lulled into the false notion that the only bad boys of the dental world were the dental litigation lawyers and over-zealous members of the General Dental Council’s investigations unit, think again.

For there’s another bad kid on the block, even more effective at dealing you a nasty financial blow than the above, without the need for recourse to litigation or lengthy disciplinary hearings.

You may have thought up to now that the benign members of the local NHS Area Team were, if not your ‘friends,’ harmless administrators, but it seems they have now decided to turn all the statistics they gather on the treatments carried out by NHS general dental practitioners, into hard cash. 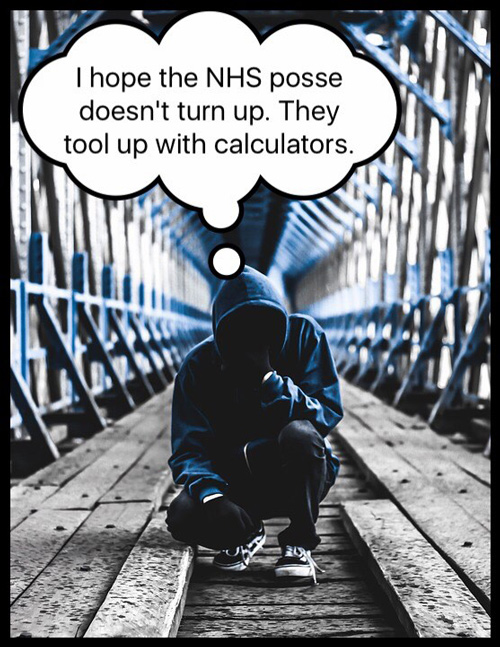 For up and down the country, in England at least, NHS Area Teams are now on a mission to clawback money from practitioners even if they have hit their targets.

The Dental Assurance Framework Report is produced by Clinical Advisors at the Business Service Authority and in effect wags its finger at dentists and says, “You have been a naughty girl. You haven’t been doing your sums exactly the same as all the other boys and girls in the class. Now go and do some lines, and then bring us your pocket money.” 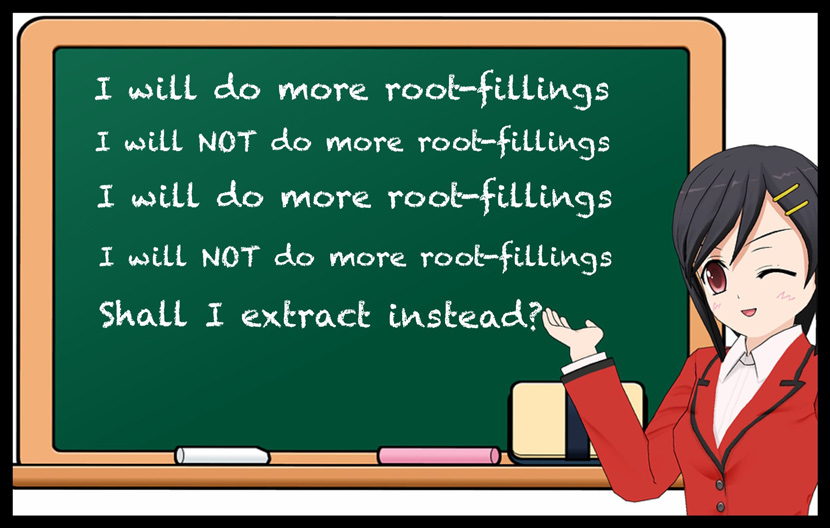 A DAF report is generated when the statistics gathered about a practitioner or practice strays outside the ‘average’ norms for the provision of a particular treatment, either nationally or locally. As an example, if you were a general practitioner who provided 33 soft occlusal splints per week, you would almost certainly stray outside the median figure for nightguard provision (in the world, let alone locally) and would (rightly) warrant further investigation.

But what is happening, is that busy practitioners are receiving these DAF reports, with the threat of clawback, for providing valid treatments that they feel appropriate for the patient, with the patient’s consent.

I have over the past week received messages from practitioners all over the country who have been on the wrong end of DAF notices, which are resulting in clawback of thousands of pounds even though the practitioners have fulfilled their UDA contracts and their duties to patients.

The statistics the BSA and Area Teams gather every day from our EDI submissions, threaten to undermine clinical freedom and drive a nail into the coffin of the already deceased morale of the UK NHS dental profession.

A common tale is of practitioners being advised that they are providing too many inlays in courses of treatment. Whether you like or hate inlays (I loathe them with a passion), you have to admit that they are a valid (and in the right mouth) sensible alternative to full crowning, where the preservation of tooth tissue is paramount. Criticising dentists for using inlays can only potentially result in either more destructive restorations being used, or less robust restorations, resulting in traumatic breakages to teeth which could have been otherwise protected.

Some practitioners have even been accused of doing TOO FEW extractions, while at the same being charged with doing too many root-treatments. Admittedly, the most common scenario is that dentists are being caught in the ‘red flag’ zone for doing too few RCT’s compared to colleagues, and more extractions – a situation perhaps understandable when practitioners struggle to remain viable under the ludicrous UDA remuneration system. 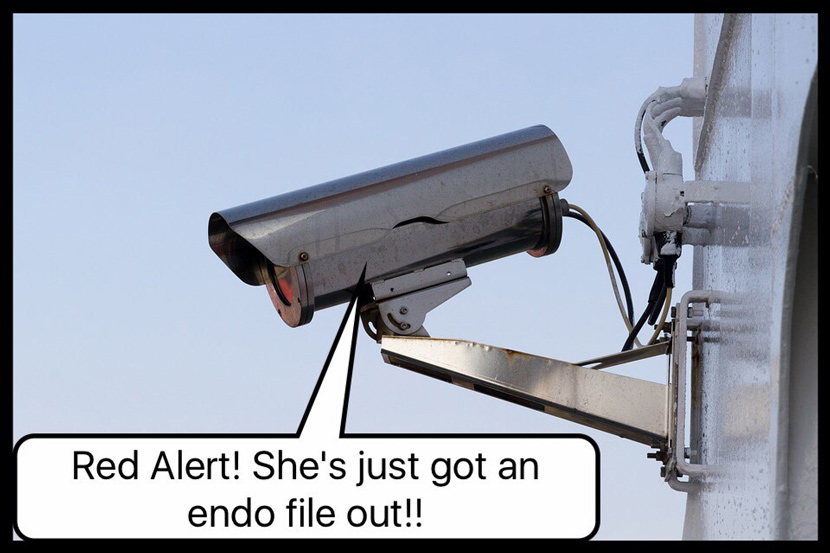 A corporate practice I know of has been red-flagged for doing too few fissure sealants. The dentists there had thoughtfully considered the evidence for and against fissure-sealing and had concluded (as many practitioners have) that unless optimum isolation in a dribbly child was obtainable, the placement of a seal was more likely to cause harm through occult caries than prevent harm, as well as then introduce the need for invasive radiographs subsequently, in order to check youngsters for recurrent caries. And although the practitioners at this particular practice always followed Delivering Better Oral Health guidelines on the application of fluoride varnish, they were red-flagged for not doing it, simply because nursing staff shortages meant that locum agency nurses were forgetting to put the code on the surgery software.

Other practitioners are being taken to task if they flag up for ‘inappropriate 28 day re-attendance’ and one practice has already had a demand for £1600 for this ‘offence’ going back to 2016. The figure represented about 70 UDA’s out of a contract of nearly 25,000. Patients are patients. They eat pork-crackling. Cusps are broken in the Sunday lunchtime battle.

Other practitioners have been targeted for doing ‘too few’ bitewings compared to the average, but surely this depends on the patient base. I work in a fairly affluent little rural town where the local population is very dentally aware, with pretty good oral hygiene habits and our practice has been deemed to be below average in bitewing taking, compared to a city eight miles away with a vastly varied socio-economic population. Half the time I take bitewing radiographs, 99 times out of 100, I KNOW I am not going to see anything on them which provokes me into providing treatment.

From conversations I have had with numerous practitioners in England recently, local Area Teams appear currently to be in a coordinated frenzy, determined to achieve clawback by interpreting treatment patterns based on statistics alone, although some Teams are demanding the submission of notes for scrutiny before making their final decisions on clawback penalties.

Whoever is directing this move towards the recovery of money (Doh! It must be the Government – am I thick or what?) the effect is that it is further acting to demoralise the profession and also, more disturbingly, introducing a restraint on clinical freedom.

While fully accepting that inappropriate claims need to be picked up and acted upon, many very good and honest hard-working practitioners are now facing the extra stress and financial burden imposed by a new zeal that is driven by a Government obsessed (despite the claim that ‘austerity’ is ending) with financial cuts and penalties.

The really scary thing is that the NHS Area Teams can just take the money out of your next schedule, no questions asked. I just hope when they are rifling through my pockets, they leave my iPhone alone.