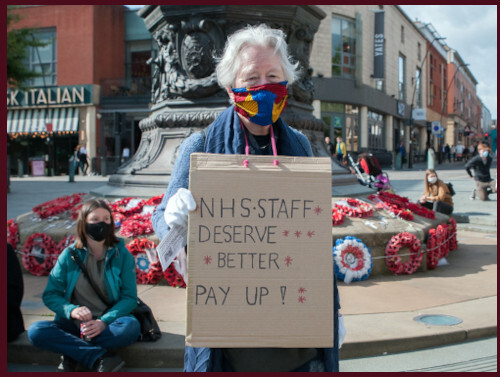 After months of delay the 2022/3 pay uplift for NHS dental contract values has been announced. The announcement had been postponed for months, given that the increase was meant to apply to schedules from May 2022.

This year there had been much speculation regarding the percentage uplift that would finally be announced. Against a background of the escalating access crisis, record inflation, and increased numbers of dentists reducing their NHS commitment, there were hopes that the uplift would reflect the governments frequently stated wish to improve availability of NHS care.

The figure for general practice is 4.75% backdated to April 2022. It is based upon a 4.5% pay increase and an extra element to reflect practice expenses. At a time when commercial energy prices have rocketed, there is increased competition for staff in a tight labour market, and general inflation has exceeded 10%, the uplift has come as a huge disappointment.

In a letter of response to the Health Secretary, Steve Barclay, BDA Chair Eddie Crouch pulled no punches. “Officials have finally confirmed the NHS figures for 2022/23. The substantially delayed uplift in contract values for general dental practice in England is 4.75% for 2022/23, backdated to April, reflecting a 4.5% rise in pay with an additional uplift applied for practice expenses.  It’s an unprecedented pay cut at the 11th hour, and ministers need to turn the page.”

A meeting between Steve Barclay, the Secretary of State for Health and Social Care, and representatives of the BMA and BDA was cancelled the morning of the uplift announcement [Wednesday], by Barclay. Confusingly, Barclay spoke of the meeting in an interview on Radio 4 after he had cancelled it. His reason for cancelling was so that he could do the media round.

On Wednesday afternoon during Prime Minister’s Questions, Rishi Sunak was asked about NHS dentistry. In response he made a number of incorrect claims which both the BDA and the questioning MP have asked him to correct.

The whole review body system is now looking vulnerable. In Eddie Crouch’s words, "Current pay review processes offer textbook examples of what not to do.”

“The pay review process itself is broken. Our members – like all health professionals - deserve fair and timely pay uplifts. When so many are reconsidering continuing to work in the NHS, to do otherwise is an act of self-harm.”

With a BBC website Reality Check feature Is the NHS pay review body independent? - BBC News  explaining that the bodies are not fully independent, a general discussion about the continued relevance of the review bodies has begun.

On the same day, health unions representing many NHS workers, said that they were withdrawing from the NHS Pay Review Body (NHSPRB) for the next pay round.  They will not be submitting evidence to the NHSPRB while the current industrial disputes remain unresolved. Unite leader Sharon Graham described the Review body as “long past its sell-by date” and asserted that it was no longer independent of government and could not make major decisions about pay. She asked, “So what is the point of it?” NHS dental contractors will be asking the same question.

The meeting cancelled on Wednesday, then went ahead on Thursday 12th January, when the BDA met with Health Secretary.

In a tweet reporting on the meeting the BDA said “The case was made that health professionals deserve fair and timely pay uplifts. But it’s one thing for government to listen. It’s another to act. What is clear is this service cannot go on this way.

The BDA tweet added “It was a civil exchange, and very much a listening exercise from government. But we’re very clear Ministers need to be willing to act.”

Early reactions from dentists who read of the BDA’s meeting were mixed. Lauren Harrhy, well known dentist on social media. tweeted “Well done to those involved, though this fight feels futile.”