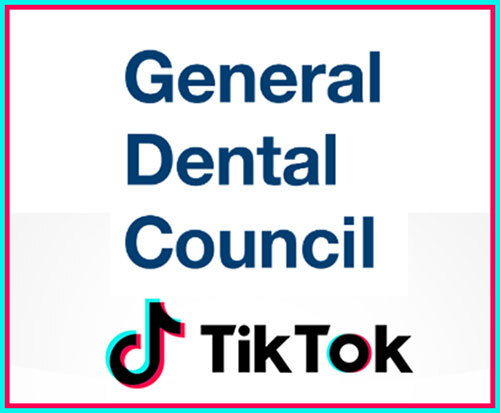 Mike Mew like his father, John Mew has a distinctive orthodontic philosophy which they call Orthotropics. It is not mainstream and both Mews have drawn extensive criticism from the conventional orthodontic community, in particular regarding the lack of evidence to support Orthotropics.

Mike Mew has not been reluctant to promote his approach having become a TikTok and YouTube sensation. The Times itself, in 2019 carried a feature about “Mewing,” as the exercises claimed to help develop a stronger looking jawline have become known. Apart from an official YouTube channel run by the Mew’s there are many more videos produced by exponents of the exercises, with just one having had over 2.4 million views. On Tiktok, “The power of Mewing” has had 24 million views.

There is a high level of ‘blue on blue’ complaints in dentistry, many leading to GDC Fitness to Practice proceedings. The complainant against Mike Mew is a dentist and consultant who was concerned by the “harm the appliances were doing.” Two patients are cited in the case. Reference is made in the GDC’s case to photos of one of the patients that shows, ”upper and lower teeth slanted forwards” as well as, “recession of the lower front teeth and an unaligned upper tooth” post treatment. Defending Mew, his representative asserts that the patients mother was “entirely supportive” of the treatment and “very happy” with the result.

Mike Mew argues that Orthotropics, which is the invention of his father, has “sufficient, objective evidence” to back up his approach to treatment. The appliances are designed to expand the arches and it is claimed that they can also “improve the midface” and “guide facial growth” so “all 32 teeth align naturally without the need for fixed braces.”

After a series of tussles with the GDC Mr Mew senior was finally removed from the register in 2017. Reading the FTP determination it can be seen that the panel agreed that there had been no patient harm in that case. Nor was there any suggestion of financial misconduct. The main issue appeared to be Mr Mews “attitude” towards the Council. Perhaps the Council prefers the attitude shown by the direct to consumer providers, since it seems more concerned about a single practitioner than a multi-million dollar international operator.

Unfortunately the list is increasingly long and tedious and usually has little or no relevance to protecting patients.

I really do think there needs to be a much better, much more relevant way of sifting out the cases that should be investigated and the others should be wrapped up much more quickly. I suppose we need some people who are dentally savvy and can take some responsibility for making sensible decisions?
0

A nurse at our corporately owned practice suffered from alcoholism and a drink-driving conviction led to a referral to the GDC. She resigned from the practice and has not worked in dentistry since (or has any intention of doing so again). After two years she has a hearing at the GDC which she is not contesting. Nonetheless we have to cancel patients for the scheduled dates in case the tribunal want to ask us about the statements that as registrants we were required to make.
So any emergency will need to wait until the GDC protects patients from someone who was never going to be involved in their treatment.
Another one for Keith’s list?
0