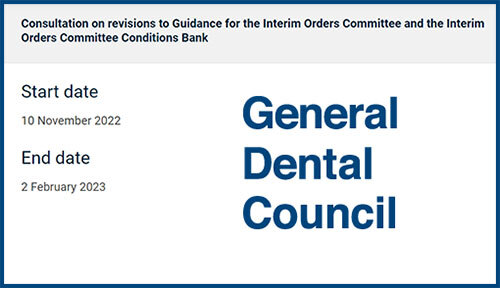 In another “soft launch” the GDC have quietly announced a consultation that could affect all registrants. It would add to the particular powers that the GDC has to suspend any registrant, before they have had the opportunity to defend themselves in the full Fitness to Practice (FTP) process.

Tucked away on their website, the consultation which closes on February 2nd 2023, concerns updates to the Interim Orders Committee (IOC) Guidance. The IOC is tasked with considering any immediate risk to public safety or confidence. It can suspend or impose conditions on a dental professionals practice before their FTP hearing.

Suspension or the imposition of conditions, without the proper FTP disciplinary process, is not a theoretical risk. Of 152 cases sent to the IOC in 2021, 41 had conditions applied, and 51 received an interim suspension. Any such restrictions would remain, typically for a minimum of six months, and likely until completion of the FTP process.

The form of GDC consultations is that the Council sets out what it intends to do, and interested stakeholders can then offer an opinion. At the end of the consultation the changes are made, possibly modified to reflect the results of the consultation. History shows that the GDC has usually got its way. However, it is expected to consult on significant proposed changes. It would be in a difficult position if it pushed changes through, where an overwhelming number of responses made reasonable criticism of the GDC’s proposals.

Clinicians will be well aware that “guidance” often becomes “direction” and may be concerned that the IOC will be increasingly rubber stamping decisions dictated by the increased GDC guidance.

The proposed guidance document can be found at Guidance for the Interim Orders: Draft for Consultation (gdc-uk.org)

Some items that might concern registrants include: Paragraph 24: “A registrant does not have an unfettered right, in any case, to insist on instructing a legal representative, regardless of the consequences for the public interest and the other parties involved”. And Paragraph 57 begins, “In conducting a risk assessment, the IOC should not engage in fact finding or resolve conflicts of evidence. As the IOC will often be considering a matter at an early stage of the investigation, it may only have limited information available.”

There is an element of Catch 22 in the proposed guidelines. For example, Paragraph 57 begins: “In conducting a risk assessment, the IOC should not engage in fact finding or resolve conflicts of evidence. As the IOC will often be considering a matter at an early stage of the investigation, it may only have limited information available.” Yet to quote paragraph 62, “An interim order is an emergency measure. A referral should be made promptly after the receipt of information that a registrant may pose immediate risk. The panel should, however, recognise that such information may be received at the time the GDC became aware of an issue or at any time thereafter. A delay without good reason could reduce the likelihood of the order being made.” This would appear to imply that the less evidence is available, the more the guidelines would encourage imposition of an Interim Order.

John Cullinane the GDC Executive director, Fitness to Practice, closed his comments in the website on the announcement, “but capturing the opinions of our stakeholders in relation to the proposals is a vital step in ensuring we get this right. As such, I encourage all with an interest to share their views by responding to this consultation.”

As noted the GDC usually get their way with consultations. This may not be surprising, for more than one reason. A previous consultation into changes to FTP (relating to changes to Rule 4, and published in 2020) received a grand total of 9 responses, seven from organisations and only two from individuals.

The proposed changes are complex and cannot be fully summarised here. And there is a tendency to believe that the GDC always ignores registrants concerns, which may put dental professionals off from responding. That is not entirely correct, as shown by the GDC’s  long overdue about turn, over refusing to provide information on registrant suicides.

Registrants, however busy, however dry the material, might want to invest their time in reading what the regulator would like to do to them, and providing feedback. As a diligent regulator, the GDC would be delighted to have a bumper crop of responses to this consultation.

The link to participate in the consultation can be found at:  https://www.gdc-uk.org/about-us/what-we-do/consultations-and-responses#ioc