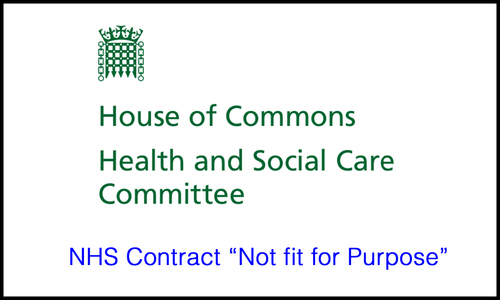 The Government Health and Social Care Committee has concluded that the NHS dental contract is “not fit for purpose.”

The House of Commons committee looking at the health Workforce has published its Third Report of Session 2022-23.

On dentistry, the Committee said “The current UDA-contract system is not fit for purpose, and urgent reform is needed to boost recruitment and retention in NHS dental services. We will return to this issue in a forthcoming inquiry into dental services.”

The British Dental Association said on the BDA News website “We welcome the conclusions of the Health and Social Care Committee inquiry which has dubbed the system underpinning NHS dentistry as not “fit for purpose” and pledged to hold an inquiry into the crisis in dental services.”

BDA News went on “The news comes just days after government announced only marginal tweaks to the widely discredited NHS contract, in which dentists are remunerated for hitting targets that often bear little relation to the work carried out. The tweaks change none of the fundamentals in a system that provides access for barely half the population and puts government targets ahead of patient care.”

“The Health Committee made the same judgement in 2008 and we have stressed that NHS dentistry will not survive without radical and urgent action from both the Department of Health and the Treasury.”

“With every day that passes dentists are walking away from the NHS, and it will take more than rearranging the deckchairs on the Titanic to stem the flow.

"We have yet to see any movement on meaningful reform and adequate funding. Until Ministers wake up the very future of a service millions depend on remains in doubt.”

The report said “Shawn Charlwood, Chair of the General Dental Practice Committee at the British Dental Association, told us that NHS dentistry is “facing a crisis the likes of which I have not seen in my 35 years in the profession.”

“Although the General Dental Council Register has the largest number of dentists in its history, the number of dentists doing NHS work is decreasing: during the pandemic, there were “3,000 fewer NHS dentists available to treat patients” than before.”

“In 2020–21 alone, there was a decrease of 951 dentists with NHS activity in England, which, as the Association of Dental Groups points out, is “the near equivalent of the whole dental student intake target for this year.”

“This brings the headcount of primary care dentists in England to its lowest level since 2013/14.147 107. Units of Dental Activity (UDAs) were introduced as a measure of dental activity and as the basis of renumerating dentists employed by the NHS in 2006, and they proved immediately problematic.”

“Our predecessor Committee advocated for reform to NHS dental contracts in 2008, noting that the introduction of UDAs “has proved extremely unpopular with dentists” and that many of the targets were “unrealistic.”

“Shawn Charlwood stated that in the intervening 14 years “nothing has been done by the Government on NHS dental reform,” arguing: “we need a new, non-UDA contact for NHS dentistry by April 2023 at the latest”

Wasn't this the conclusion from the Parliamentary Health Select Committee enquiry into England's nhs dental system problems in 2008 ?!?!?

Since then every Pilot alternative has been tried and has FAILED because no matter HOW you do this, for the same limited funding that provides for maybe a third to one half of the Clinical needs of the population, you simply cannot make that work.

So after 14 years NHS England makes some amendments, which were basically lifted right out of the 2008 Health Select Committee report as an interim measure back then :o

14 years the misleading and unfit for purpose UDA target system in England has been fudged, extended and basically not changed - were the Civil servants at NHS England or the Treasury just sticking two fingers up at the Parliamentary Health Select Committee (comprising members from all the main political parties) and just pretending to be changing things??

Why will it be any different this time when the NHS says NO MORE MONEY?
0