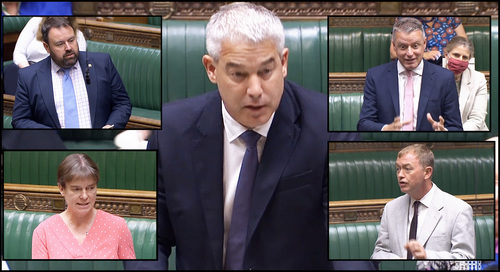 The first oral questions faced by the new Secretary of State for Health and Social Care  in the Commons on Tuesday, related to NHS dental services access.

Steve Barclay was asked by West Dorset Conservative MP Chris Loder what steps he was taking to improve access to NHS dentistry in the south-west.

The Health Secretary replied “During the pandemic, we took unprecedented action to protect NHS dentistry capacity, providing over £1.7 billion of income protection.”

“We also ensured that those who needed it most could access the available care by establishing 700 urgent care centres nationwide.”

The announcement of changes to the dental contract  said that NHSE intends a rule change which will allow commissioners to release funding quickly from contracts, where not all activity will be delivered – an admission that not all contracted activity is generally delivered at 100%.

The Annex of the letter sent by NHSE to NHS contractors yesterday said “Our initial step to address this will be to encourage commissioners and contractors to work collaboratively, particularly for contracts where 30% of activity has not been delivered in the first half of the year, to consider reducing the annual activity requirement by 10%, on a voluntary basis only, allowing the opportunity for other practices to use these resources to treat more patients” - a far cry from a general “return to 100%” of dentists’ contracted activity Mr Barclay alluded to.

Mr Loder said “In West Dorset we are really struggling with dentist availability; at the moment there is no capacity for new patients, and the NHS appears to be incapable of solving the issue.”

“Could my right hon. Friend tell me what he is doing to help restore dental services in West Dorset for those who need them?”

The Health Secretary said “I recognise that there are significant challenges in NHS dentistry, including disparities across regions.”

“Improving access for patients is a priority, and that is why just today the Government, together with NHS England, have announced a package of improvements to the NHS dental system, on which we have worked closely with the sector and the British Dental Association.”

Selaine Saxby, Conservative MP for North Devon submitted a question to the Health Secretary, asking “What progress he has made on increasing the availability of NHS dentistry services.”

Ms Saxby told the Commons ‘Having seen the former Minister for dentistry on numerous occasions, we were assured of today’s announcement to tackle the appalling lack of dentists in dental deserts such as my North Devon constituency.’

She asked “Can my right hon. Friend explain how the measures in today’s written ministerial statement will rapidly deliver extra dental appointments?”

Mr Barclay expressed his appreciation for Ms Saxby’s campaigning on the issue, but didn’t answer the question directly, again referring to the earlier NHSE announcement of contract changes.

Mr Barclay said “The sorts of areas where the measures announced today will help, include the management of NHS dental contracts, increasing the use of the skills mix in the dental workforce, and rewarding complex treatment to better reflect the complexity of that work.”

Luke Pollard, MP for Plymouth, Sutton and Devonport told the Commons “There are 18,000 people on the NHS waiting list for dentistry in Plymouth; it is a real crisis.”

“As a city, we have a cross-party plan for the new Cavell centre, a west end health hub as part of a health village in the city centre, with extra dental capacity with our brilliant dental school. However, we urgently need the Government to unlock the funding for it.”

“Will the Secretary of State agree to meet a cross-party delegation from Plymouth to make the case for that, so that we can get on, get spades in the ground and get people’s teeth healed?”

Steve Barclay replied “As part of the Government’s wider commitment to levelling up, we are very interested in taking a place-based approach. Indeed, the essence of the integrated care boards is to help facilitate that. I am very happy to have discussions with colleagues across the House on how we best deliver that.”

He summed up the frustrations of dental practitioners succinctly. He told the Health Secretary “We all know that NHS dentistry was in crisis long before the pandemic.”

“It is obvious why: we have an ageing system—units of dental activity—based on a snapshot taken 15 years ago, which is completely unfit for purpose, as dentists and patients around the country are telling the Government.”

“Will the Secretary of State listen to dentists and patients and reform the system urgently?”

The Health Secretary said “I hope the hon Gentleman will look at today’s announcement, because it shows that the Department has listened. That is why, for example, it will facilitate better contract management, better reflect the floor price for units of dental activity and reward complex treatment, which was one of the key concerns.”

“Equally, I hope that the hon. Gentleman recognises that this Government, through the £1.7 billion of income protection during the pandemic, have done much to facilitate dentistry’s ability to bounce back.”

Our thanks to @TimFarron MP for pushing for urgent change in NHS dentistry.

Today’s announcement changes none of the fundamentals.