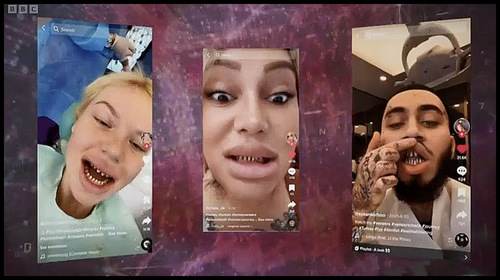 The hidden dangers of destructive cosmetic dentistry carried out abroad have been highlighted in a shocking documentary resulting from a collaboration by the British Dental Association and the BBC.

A survey of 1000 dentists carried out by the BDA earlier in the year found that 95% of respondents reported that they have examined patients who have travelled abroad for dental treatment.

Of those, an alarming  86% say they have treated cases that developed complications.

BDA News said “Crowns were identified as the treatment most likely to need follow-up work, closely followed by implants.”

“Just over 40% of respondents said the remedial treatment was provided on the NHS.”

Dr Crouch that many of his colleagues had reported extensive problems.

He said patients suffered “Pain, abscesses. I spoke to Jack (Fincham) earlier. Jack has been lucky. He hasn’t had any of those problems, but sadly, many of my colleagues on the High Street are seeing a lot of people returning, having had this treatment, with severe problems.”

Naga Munchetty asked the BDA chair “What is the actual issue?”

Charlie Stayt asked Dr Crouch what patients should be wary of when researching dental tourism.

“Many of these patients go they’re thinking they’re having veneers which is something that is stuck to the front of the tooth but they actually have huge amounts of their teeth drilled away. That isn’t informed consent.”

The presenter of the documentary Turkey Teeth: Bargain Smiles or Big Mistake? was dentist Trishala Lakhani.

She sent iPhone photographs of her own teeth to 150 dental clinics in Turkey and 50 clinics in the UK.

Dr Lakhani reported that 120 of the Turkish clinics responded to her request for treatment suggestions for her teeth, while 34 of the UK clinics did.

Dentists at one clinic based in Turkey suggested all 28 of Dr Lakhani’s (perfect) teeth should be crowned with Zirconium.

Dr Lakhani said “Seventy of the 120 Turkish clinics that responded to our message, offered a treatment plan that involves me getting crowns and veneers.”

She made the important point ‘If I was genuinely insecure about something, and a practitioner or clinic told me you need this to make that better. I wouldn’t think twice because you trust these people.”

Dr Lakhani revealed that none of the UK clinics approached for the documentary suggested any intervention.

A general practitioner who watched the documentary on iPlayer told GDPUK “At last, there is mainstream coverage of a rapidly growing problem.”

“I thought this programme was excellent and will hopefully make patients think twice before embarking on dental tourism trips.”

“I have seen a couple of patients in the past few years who had multiple crowns placed on perfect teeth, just to straighten them up. Orthodontics by clear aligners would have been a more appropriate approach, but now both of the patients have had to have teeth root-treated by specialists in order to salvage once-perfect teeth.”

Turkey Teeth: Bargain Smiles or Big Mistake? can be found on iPlayer here.