Announcement On Contract Reforms Due “In The Coming Weeks” Says Minister, As Others Search For ‘The Holy Grail’ 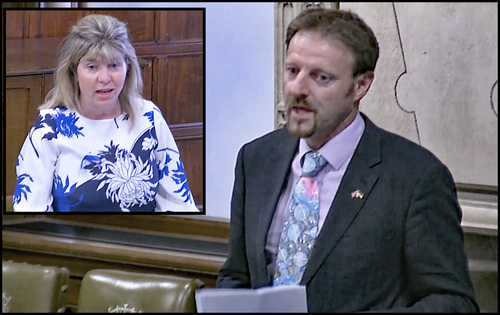 “Finding a dentist in Lincolnshire is like finding the Holy Grail” an MP told fellow Members of Parliament at the Commons yesterday.

Sir John Hayes, who represents  South Holland and the Deepings was speaking in the Westminster Hall debate: NHS Dentistry in England.

Sir John said  “Lincolnshire has three of the four worst dental deserts in the United Kingdom according to the Association Of Dental Groups, with just 38 dentists per 100,000 people.

The Sir John was one of a number of MP’s who made strong calls on the Parliamentary Under Secretary of State for Primary Care, Maria Caulfield, to introduce a new, workable NHS dental contract. Ms Caulfield was in attendance at the debate.

The debate was initiated by Cornwall MP Derek Thomas, who represents St Ives.

Mr Thomas said the debate was in combination with a petition already been signed by over 10,000 members of the public. He told MP’s “The petition calls for an independent review of the existing NHS dental contract and a radical rethink of the way in which dental services are delivered.”

The MP said that after a survey he posted early in 2022, he had be shocked by the   large number of responses from constituents with stories of their problems with accessing NHS dental care and their desperate attempts at DIY dentistry.

Mr Thomas said “Other constituents have given up completely. They don’t show up on the waiting list because they have given up on waiting.”

The St Ives MP told MPs “One constituent comes from a family of seven. Only the youngest has ever seen a dentist and only then because he went to hospital for urgent surgery. The oldest is 20.”

He said the fees one lady paid privately to remedy just one abscess, was the equivalent of month’s rent.

"It is not enough to be seriously planning reform – we must be planning serious reform," says @DerekThomasUK MP.

It will take more than tweaks to a failed contract to ensure NHS dentistry has a future.

MP Damian Green said “The situation is equally bad in Kent. It is almost impossible in Ashford to find an NHS dentist and the frustration of me and my constituents on this is compounded by the lack of response of the Health Service generally.”

“I have before me an email I sent seven weeks ago - somebody who couldn’t find a dentist.  Not even a reply from NHS England. So, I think from top to bottom, this system needs complete reform.”

Derek Thomas said “Not that not every member of the British public could ever have access to NHS dentistry simply because NHS England does not commission enough dentistry to cover the whole of the population.”

“So it might be for the Minister to clarify today, what is the government’s expectations about access to NHS dental care and whether there is a right for anybody, whoever they might be, to access that care?”

Mr Thomas added “It surprises people that we didn’t commission enough care to actually meet (the needs) of every one of our constituents.”

Addressing the UDA-based contract, Mr Thomas said that in January, the Minister agreed with him in oral questions that “The contract was the nub of the problem.”

Mr Thomas reported the Minister as saying in February “There is no doubt that the Units of Dental Activity method of contract payments is a perverse disincentive for  dentists.  The more they do, the less they seem to be paid.

The Minister reportedly said “I for one, certainly do not

Mr Thomas told MPs “There are two main issues with the current dental contract, both of which are not just obstacles to dental health, but are actively creating problems for the future.”

“First, the current system does not focus on prevention. When units of dental activity are the sole measure of contract performance, there is no incentive for preventative work, nor is there incentive for making the best use of the skills of the whole dental team.”

Mr Thomas pointed out to his colleagues that practices cannot make a claim for payment for a course of treatment if was not initiated by anyone other than a dentist.”

He said “I made sure, by the way, that the title of this debate referred to NHS dentistry not NHS dentists. We need to recognise the contribution of the whole team of dental professionals, dental nurses, dental hygienist dental therapists and dental technicians.

“This is not just saving money, but using professionals in the best way we can,” he added.

In her contribution to the debate, the Minister  told MPs “It’s  important to recognise that the nub of the problem before COVID has been around the dental contract.”

“We have been negotiating with the BDA with a new contract. We started those negotiations on the 24th of

March. A final offer went to the BDA on the 20th of May and we are waiting their response.  “We have been in negotiations we haven’t just been waiting for work to be done.”

Ms Caulfield added regarding the contract “We expect to make an announcement before the summer recess,” adding we will be making announcements in the coming weeks on those contract reforms.”

The Minister wouldn’t be drawn into answering MP Paul Blomfield’s question.  He had asked  if the reforms would stop dentists being driven out of the NHS and into private practice.  Ms Caulfield said she couldn’t comment while live negotiations were going on.

However, Ms Caulfield did say that the reforms would address “Fair payment for the level of work that dentists receive for their activity.”

The Minister told MPs that a new contract “Will also look at the issue around the whole dental team and not just dentists. We have looked into whether we need legislation to be able to upskill - whether it’s dental technicians or dental nurses.”   Ms Caulfield said “We don’t,  and so we’re able to make progress in some of those areas in particular and reward them for the work that they’re doing and enable them to take on more work.”

produced the results that we were we were hoping for.”

“They haven’t increased access for patients, they haven’t reduced the inequalities and they haven’t pointed to a model that would be sustainable.”