Now You See It, Now You Don’t. The £50 million NHS Dentistry Trick 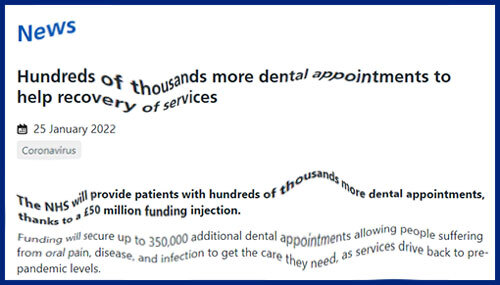 The heavily publicised £50 million pounds additional funding for dentistry that was announced earlier this year has turned out to be nothing of the sort. It seems likely that £25 million or less will have been spent, and that this will have bought far less than the claimed 350, 000 appointments. Much of this reduced spend has occurred outside the GDS.

January saw a barrage of shocking stories about the fragile state of NHS dentistry. The BDA organised a PR onslaught, across national and local media. News and current affairs programming repeated the key messages that NHS dentistry was often unavailable, and the public were suffering.

The Department of Health must have been desperate to change the news narrative. Only days later, the Government announced a programme of £50 million emergency funding. As expected comprehensive and generally favourable media coverage followed.  As fuller details on how the scheme would work emerged, the profession began to wonder if this was a project to provide dental appointments, or just grab positive headlines. Papers that had been running dental DIY stories, now heralded a “blitz” of extra appointments.

There have been debates in both the Commons and the Lords as well as committee meetings about the access crisis since January. Faced with the familiar complaints of constituents left in pain, a lack of appointments, and emerging “dental deserts,” ministers developed a routine response. Again and again, the £50 million figure was quoted.

Once the announcement had faded from the headlines, NHS press officers became very unhelpful when the BDA and other interested groups asked how the scheme was going. But now a clearer picture has emerged.

It would appear that when political expediency and healthcare meet, there can only be one winner.