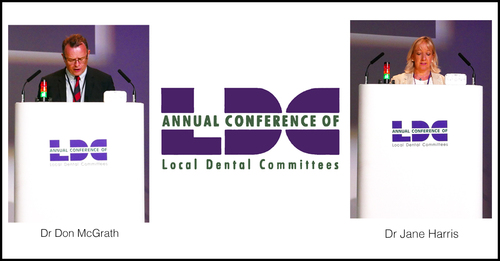 If the Government doesn’t invest significant funds in NHS dentistry, the only way to run a satisfactory NHS dental system would be to adopt a core service, the Annual Local Dental Conference has been told.

Delegates at the International Conference Centre Wales strongly supported a motion by Manchester LDC presented by Dr Don McGrath, which called for the adoption of a core service if significant funds are not injected into health service dentistry.

Manchester LDC said that Government “Imposed a contract in 2006 without agreement from the profession” and  “Have promised reform running prototypes and pilots which have all been abandoned.”

The LDC has said that Government gave politicians ‘cover’ that reform was “Imminent, all the time knowing it was designed to be a service for little more than half the population.”

The Manchester LDC added that the Government “Have been happy for GDS dentists to take the blame for the shortcomings they imposed,” as well as setting GDS dentists unachievable quarterly targets and “Leaving a feast of clawback, further undermining dental providers’ budgets and their teams.”

Dr Harris had shocked the Newport audience when she revealed that at one point as an NHS dental associate, she had earned less than the National minimal wage.

Dr Harris was speaking in support of the West Sussex LDC motion which called for a dental contract ‘fit for purpose.’

The West Sussex motion said “The current contractual funding arrangements are only fit for purpose as a minimum core service.”

“To define this as a comprehensive offer is misleading to the public, unrealistic, unworkable, and not financially viable to dental practitioners.”

In its supporting statement, the West Sussex LDC said “The current NHS offer stating it to be a comprehensive services is to misleading the public and creating problems with fulfilling patient expectations that are not compatible with the financial reality of the NHS offer to practices and practitioners.”

Speaking for the Manchester LDC motion, Dr McGrath told the Conference “This present contract is designed to provide a service for only fifty percent of the population.”

“NHS England and the Government have GOT to come clean with the electorate that the NHS budget does not provide all treatment for all the population, using this design.”

Dr McGrath continued “I think we as a profession recognise that there is a finite amount of money available to  service the population.”

“What we ask Government to do it accept this as a fact.”

“Taking it to the next stage, we need to design a system that fits this principle. In my opinion, that’s a targeted service – traditionally called a ‘core service.’”

“We, as a profession, need to redefine the narrative and TELL the Government what we are prepared to provide.”

He said that for too long, dentists had accepted unsatisfactory ways of working that had resulted in the imposition of the “Unachievable targets in Q3 and Q4.”

Dr McGrath went on “Now is the time for us to demand what we as a group are prepared to accept, and let the Government and NHS England decide if they see a future in NHS dentistry.”

In concluding, Dr McGrath added  “Or will we see, what we’ve all seen for some time, that this Government wants NHS dentistry privatised by stealth.”

The Manchester motion gained 81% of the delegate vote.