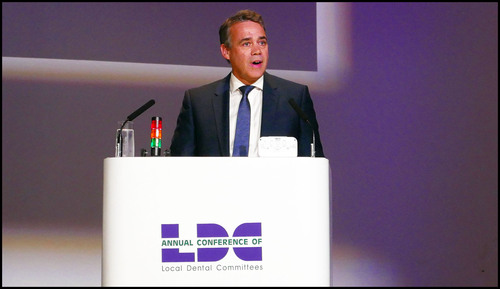 The rush back to the Government’s definition of ‘normality’ in NHS dentistry has been driven by the Treasury, the Local Dental Committee National Conference was told on Friday.

Dr Shawn Charlwood told the Conference that the move back to ‘normal’ targets had been because the Treasury is having to “Fill the gap left by the collapse in patient charge revenues.”

The Chair of the British Dental Association’s General Dental Practice Committee said “State contributions which have fallen year on year, have had to go in the other direction during the pandemic.”

“For the first time in a generation, Government has grown reliant on patient charge revenue collected from ‘free at the point of delivery’ NHS dental care.”

Dr Charlwood was speaking after Conference Chair Dr Dan Cook told delegates gathered in Newport, that the Minister of Health responsible for dentistry, Maria Caulfield, had pulled out of speaking at the Conference due to other ‘Government business.’

Dr Charlwood said “The pressure to bring back ‘normality’ has underpinned the choices made across Government, whether it’s on targets or the future direction of reform.”

He asked “Why is  Government still talking about the fifty million pound package?”

“Certainly were the Minister here, I would be asking why the department keeps coming back to policy that many in our profession regards as PR.”

‘It was a short-term fix, not a long-term strategy.

Chillingly, Dr Charlwood told Conference “We were told that if the fifty million is not completely spent, it will be impossible to justify additional long-term investment.”

The GDPC Chair questioned the Government’s use of empty slogans.

Dr Charlwood asked “What does levelling up dentistry mean?”

“Sadly, that’s what we’re getting used to. As the pressure continues to build on Government, slogans and pledges with no commitment to deliver long-term sustainable funding or reforms.”

“Whether it’s widening inequality, charities stepping in where the NHS has failed, or the latest on the access crisis – the same phrases have been thrown back at us by Government.”

Dr Charlwood said that had the Minister been present, he would have asked her why there was a continued reluctance “To state the clear intent to move away from the discredited UDA system.”

He also asked whether dentistry had truly returned to normality.

“It’s a simple question. With a simple answer: No. Real burdens remain. For any of you who’ve had the chance to read through the belated comms from NHS England, practices will continue to comply with much of recent guidance,” Dr Charlwood said.

“Maintaining screening, triaging and separate pathways and approaches for patients with symptoms of respiratory infection.”

“New guidance places an emphasis on ensuring practices have adequate ventilation and PPE.”

“However, as colleagues in England will know, and all private colleagues can attest – it’s one thing for officials to place an emphasis here, it’s quite another for government to offer anything in the way of meaningful support.”

He added “We could hope for candour on where we’re going in Q2, but colleagues can hazard an educated guess.”

Considering whether NHS dentistry has a future, Dr Charlwood said  “It’s a difficult question. It’s certainly withering on the vine and the jury’s out. NHS dentistry is in intensive care, and the government’s resus team seem to be dragging their heels.”

Wrapping up his address to Conference, Dr Charlwood said “Were she here today (Maria Caulfield) I would have thanked her for the comments she made in January.”

Referring to an interview with a radio station in January, Dr Charlwood said “The Minister diagnosed the problem and offered a solution: contract and investment.”

“In the year ahead, we will see if her government is ready and willing to do what needs to be done. But you have my word, we will not stop pushing for those solutions on your behalf.”