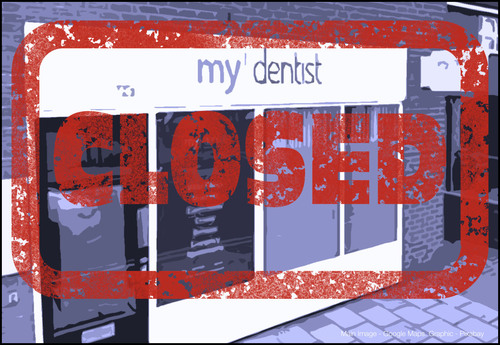 The plight of a town with around 6,000 inhabitants which has been deprived of NHS dental services for twelve months was highlighted on Friday.

Leiston in Suffolk saw the doors of its last remaining NHS dental practice close on April 30th in 2021.

Suffolk News said that the closure of the MyDentist practice sparked “Fury around the town and surrounding villages.”

The Toothless in Suffolk group marked the 12 months since the High Street MyDentist practice closed with a march and protest held outside the premises of the former practice.

The  rally was aimed at drawing attention to the “Lack of action by NHS commissioners” to alleviate the local dental crisis.

The Toothless in Suffolk movement was created shortly after the closure of the Leiston practice by a local resident, Steve Marsling and Mark Jones, with the aim of  bringing back an NHS dentist to the town.

Suffolk News reported that Mr Marsling and the Toothless campaigners had met with “The head of NHS Commissioning several times to press for 'immediate action.'   The campaigners told the news outlet that “These discussions have yet to bear any fruit.”

“It’s nothing short of a disgrace. A national disgrace,” Mr Marsling said.

“NHS commissioners are employed to ensure NHS treatments are provided where there’s a need, and yet they are seemingly incapable of fulfilling their responsibilities,” he added.

"Their understanding of the severe consequences this dental crisis is having on the health of patients, both young and old, is limited,” he concluded.

Following that rally Dr Crouch wrote on the BDA website “I was proud to stand with them, together with colleagues from the region, in common cause.”

“We reached out to the campaigners 'Toothless in Suffolk'. They represent an area where NHS dentistry was in crisis long before COVID struck, where already limited access to services has fallen off a cliff during the pandemic.”

“From failed contracts to underfunding, patients and dentists are now speaking with one voice on the need for change.”

🦷 The residents of Leiston have not had access to an NHS dentist for 12 months. We protested outside the old NHS dental surgery that closed its doors last year.

⁦⁦The dental crisis continues to affect families up and down the country. NHS dentistry has been forgotten. pic.twitter.com/q2N8ZTF8gO

The Suffolk News outlet quoted Dr Crouch last week as saying Leiston “Offers a taste of where NHS dentistry could head unless the Government steps up.”

“A whole community denied access to basic healthcare, with charities that normally operate in the developing world left to pick up the pieces.”

“We will only see progress if Ministers turn the page on a decade of failed contracts and underfunding."

Suffolk News said “In response, an NHS spokesperson in the East of England said they understood the frustration of communities where NHS dental services have closed and remain 'fully committed' to ensuring all can access 'high quality dental care.’”

"We are working closely with providers to improve access to services, including inviting NHS contract holders to take on additional activity."

"We have continued to share information with Mr Marsling as a representative of the ‘Toothless’ campaign group in regard to the process that is underway and we remain optimistic that a solution can be found.”

BBC News said “Toothless In Suffolk said it was hoping to put "pressure" on a private dentist, due to open in Leiston, to take on NHS patients.”

Metro reported earlier this month that “According to The Oral Health Foundation, a quarter of UK households opted for some form of DIY dentistry during lockdown, with 8% having at least one person who has tried to pull out a tooth.

The Metro website said the “NHS dental statistics biannual report says that in the 24 months leading up to 31 December, 2021, just 35% of the adult population were seen by an NHS dentist.”

Metro reported “It’s not just instances of tooth decay or gum disease which are going untreated either, but oral cancers, where survival rates plummet without early detection. It’s dentists on the frontline who detect these cancers, which kill more Britons each year than car accidents.”

Neil Carmichael, Chair of the Association of Dental Groups (ADG) told Metro “There is a clear problem.”

“In the year to March 2021 the NHS lost a record 951 NHS dentists in England. Our estimates are that we could be seeing a similar exodus this year. Brexit, Covid-19 and contracts have all impacted the total capacity of the dental workforce.”

A spokesman for the NHS in the East of England told BBC News "We can understand the frustration of some communities where NHS dental services have closed whilst new services are being developed, and we remain fully committed to ensuring everyone can access high quality dental care.”

"We are working closely with providers to improve access to services, including inviting NHS contract holders to take on additional activity.”

"We remain optimistic that a solution can be found."

He added that "urgent and emergency dental care is available for those who need it.”