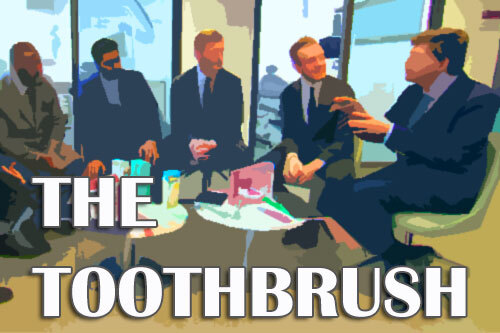 Young prospective entrepreneurs vie for the chance to work with Lord Sugar in this BBC One reality series, now in its 16th year.

The programme opened with a session at the Eastman Dental Hospital. The teams where asked to design an electric toothbrush together with a companion app. Having done this they then pitched their idea to two major buyers.

Francesca Wallbank had worked at an oral care company and led the female team. They went ahead with a space theme, and thought about how they would link to their app. Their brand became Brushing Star - with the aim that the child user would become a star at brushing.

The male team come up with an idea of a concept based on magic. This became Wiffy the Wizard, a gender neutral brown Wand.

Both teams spilt into two groups, the first to create the brush, the hardware, with the other half developing the app.

After this necessarily hurried process, the teams made two pitches. BUPA Dental were not impressed by the brown Wizardy brush. The pitch for the girls to BUPA went better, but they agreed to change everything to suit the buyer.

A children’s focus group [total sample size was 4] liked the space aspect and the colours of the girl’s effort, the brown brush wasn’t attractive to the kids.

Next pitch was to Superdrug buyers, they asked serious questions to both groups. Aaron, the team leader, kept true to his idea that the brush had to be dark brown like a wooden wand, yet this brown cylindrical design had other connotations for the potential experienced buyers! Aaron stuck to his brown design concept.

Bearing in mind the teams only had a couple of TV days they did produce a credible prototype, and both had rudimentary style apps.

BUPA ordered a notional 1000 units from the girls withSuperdrug ordering 10,000.

The boys’ team gained no orders.

The TV programme followed the long established format where the teams are interrogated by Lord Sugar ultimately leading to the dismissal of one of the contestants. There followed the usual recriminations between the team members which produces the most entertaining part of the programme as they argued about each others failings. Team leader Aaron admitted and agreed that he had persisted with the faecal appearance of their product. The ambiguous design was  mentioned many times in the course of the programme including by the prospective buyers

Surprisingly Conor who claimed expertise in apps was sacked having led the app team in producing a very wooden childish design in the limited time available.

Overall for this watcher this was an amusing programme, the toothbrush theme was a vehicle for exploring the character of the various candidates.  The Apprentice format is getting tired, along with quite a number of the BBC’s national institutions, Strictly and Children in Need, they follow their well trodden formula, with no deviation. This show must be seen as exactly that, not a serious business event, its a lowish budget, rapidly filmed series, with minimal involvement from Lord Sugar.